Virtue Has a Veil, but Besting COVID Requires a Mask… 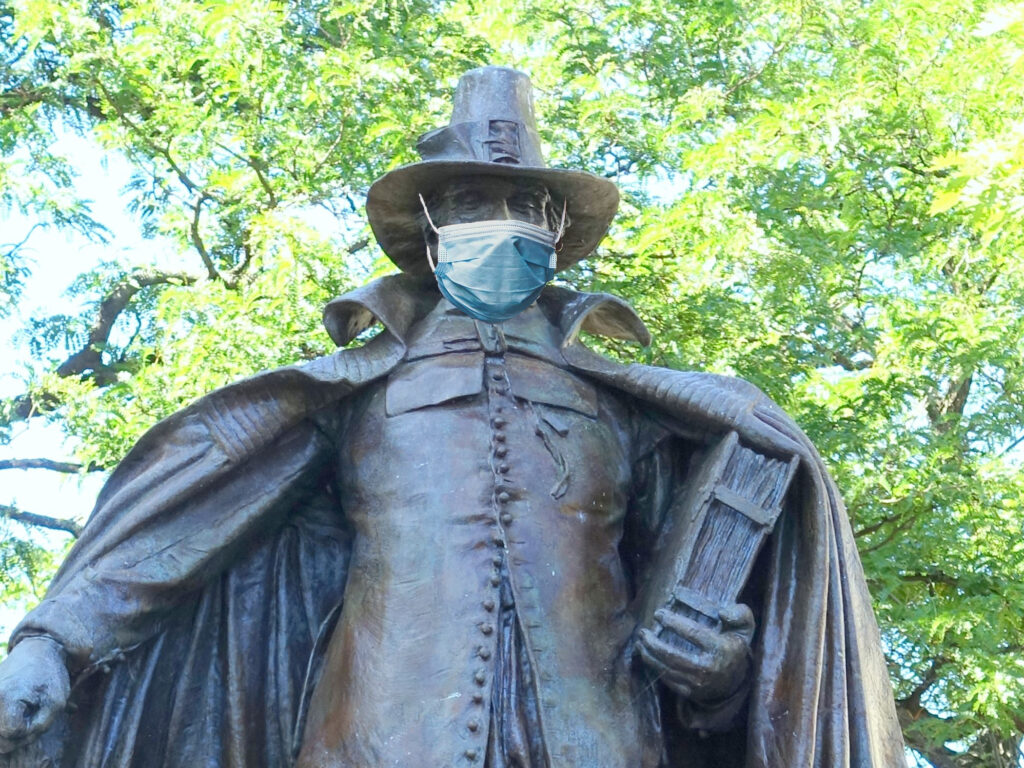 No puritan can find vice in wearing this mask. (created via wikipedia & google search images)

SPRINGFIELD—With flickers of hope that the worst of the COVID-19 outbreak may be passing here and throughout Western Massachusetts, local officials and hospital administrators laid out some changes due in the coming weeks. First among these is implementing Governor Charlie Baker’s mandate for residents to wear masks when in public and social distancing is not possible.

Another development is the growing availability of testing, which will become essential any semblance of normality is to return soon. Baystate Health Systems CEO & President Dr. Mark Keroack said the health network’s string of testing sites throughout the 413 would begin testing contacts of COVID-19 positive individuals, even if such contacts are not showing symptoms of the disease.

Execution of the mask order and expanded testing complement the city’s preparations to begin reopening city buildings to the public.

A central focus of the city’s weekly briefing was Baker’s mask order. Health & Human Services Commissioner Helen Caulton-Harris stressed the importance of the policy in and played down the possibility of enforcement actions.

“The police and health officials really have important work to do. We do not want to be the face-covering police,” she said.

Yet, there were gains the city had made against the virus which officials hoped mask compliance would secure.

City and regional data continue to show that the 413 has not experienced the magnitude of cases or hospitalizations the eastern part of the state has. But for the Holyoke Soldiers’ Home tragedy, the region and Hampden County in particular, would likely rank much lower in terms of deaths as well. 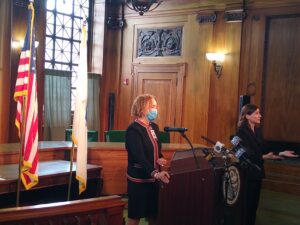 Despite poverty and imperfect urban policy, Springfield has avoided a devastating COVID-19 outbreak like the one bedeviling Chelsea.

Caulton-Harris released numbers Monday that showed the city had 1484 COVID-19 cases, up only 167 since the state released figures on Wednesday. That equals about a third of Hampden County’s overall case count, roughly the same as Springfield’s share of the county’s population. Deaths of city residents are estimated to be 22, one more than last week.

Dr. Robert Roose, the chief medical officer for Mercy Medical Center, said testing Mercy had done found barely 1% of the homeless surveyed were positive. That was a stark comparison to some Boston homeless populations which tested upwards of 36% posiitve, mostly without symptoms.

Keroack suggested that some homeless populations across the country simply did not become exposed the way Boston did.

These results thus far are encouraging given the slow process to testing any of Springfield’s homeless population. As Mayor Domenic Sarno noted, the city had quickly constructed a triage tent for the homeless, but implementation of testing was glacial. 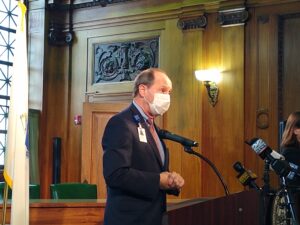 Keroack also announced Monday that Baystate would be broadening its criteria for whom is eligible to be tested for COVID-19 to include contacts of those who tested positive. Until now, even if a COVID-19 patient’s contacts were identified, they might not be able to get a test.

“I look forward to the day when anybody can get a COVID-19 test, Keroack said.

However, tracing only counters virus spread so much, especially as economy inevitably reopens. Officials stressed continued distancing and wearing of mask so as not to give up the city and region’s progress.

As Caulton-Harris noted, the city had been encouraging their use for some weeks, but the city health board, which she oversees, was reluctant to attach mandatory penalties. With Baker’s order, which allows for a $300 fine, that became moot.

Baker’s order is not as expansive as some communities. Caulton-Harris confirmed that masks are mandated where social distancing is not possible. As a practical matter, that essentially means all stores, public transportation and most indoor places. While outdoors, masks would be needed in crowed spaces, but almost certainly not when alone or when there is sufficient space to distance. Transmission risk is lower while outdoors.

Some cities have gone much further. Cambridge and Somerville have instituted hard mandates for masks when in virtually any public setting. Other cities, like Holyoke, already had masks orders like the one Baker imposed. 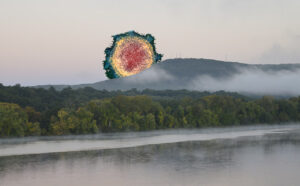 Masks will help move past the COVID dawn. (created via wikipedia images)

Springfield officials want to avoid issuing fines if at all possible. Education is the priority, Caulton-Harris said. Citations for noncompliance are a last resort. Like other cities, Springfield could go further than the governor’s order, but has no plan to so now.

Police Commissioner Cheryl Clapprood, speaking at Monday’s briefing, said that while the warm weather brought people out, most people were complying with distancing requirements. By comparison, several state parks out east were closed due to overcrowding.

Echoing the health commissioner, Clapprood indicated that Pearl Street is working on equipping officers with masks with orders to distribute to unmasked residents rather than issue fines.

Clapprood pointed to serial lawbreakers as the principal concern for enforcement. However, the small, but growing anti-shutdown movement, however Astroturfed, may be the bigger challenge. Ostensibly libertarian-minded individuals have opposed the mask mandate as an infringement on personal freedom.

However, the mask mandate does not keep the wearer safe. Rather, it serves to contain any viruses the wearer could be shedding, especially asymptomatic and pre-symptomatic carriers of the novel coronavirus. In short, it protects those around the wearer.

That fact will likely be central to the education—and pleas—Caulton-Harris and other Springfield officials will be broadcasting.

It would be the only way to build on the progress made thus far.

Quoting Professor Cornel West, she continued, “Each of us can make a positive difference if we commit ourselves to do so.”