Will the 413 Look South as the Nutmeg State Begins to Stir?…

UPDATED 4:50PM: To include comments from Mayor Ludwick of Enfield. 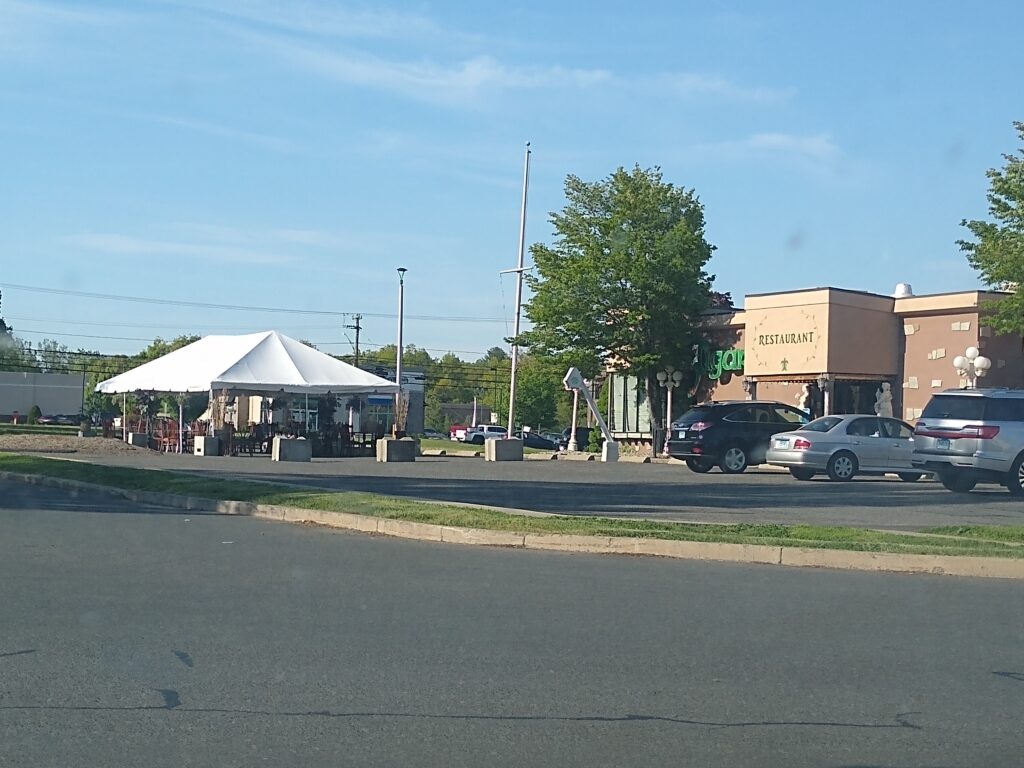 A tent has been raised in Figaro Ristorante’s for outdoor dining now permitted in CT. (WMP&I)

ENFIELD—In the retail flats of this Constitution State border town, life has begun to come back. Two months after he closed stores and restaurants to limit the spread of the novel coronavirus, Connecticut Governor Ned Lamont has allowed retailers to reopen, with restrictions, and dine-in food service to resume—outdoors. Many stores remain shut or limit contact to curbside pickup, but others’ doors are open and some shoppers are crossing retails’ thresholds.

Rising from the parking lot of Figaro Ristorante near the Enfield Mall’s husk is a tent for al fresco diners. It was one of very few restaurants in the retail strips off I-91 here taking that step. Thus, there will not be a flood of Bay Staters coming here to eat. Still, this rumble to life South of the Border could prompt travel from Massachusetts and ripple into the economies and public health responses of two of the state hardest hit by the COVID-19 pandemic.

Massachusetts did join a regional group of states stretching south to Delaware. They hoped to coordinate and share best practices about opening. But aside from some strategic decisions in the Tri-State area around New York, each state has basically gone its own way.

While the Southwestern Connecticut’s proximity to still-closed New York gets press, less attention has been paid to the I-91 corridor and the varying openness along the highway.

Hartford and Springfield have deep ties and residents of both states work, play, shop and dine in the other. The metropolitan areas of neither, however, have been epicenters of their states’ outbreaks.

Hartford and Springfield, and the spaces in between, have deep tied including transportation links like the Hartford Line. (via wikipedia)

In data released Thursday by Massachusetts and Connecticut respectively, Hampden County has had 5492 COVID-19 cases while Hartford County, which includes Enfield, has had 9299. In Connecticut, Fairfield and New Haven counties were hit far harder than Greater Hartford, while Massachusetts’s troubles have been severest in and around Boston.

Walter Gunn, a member of the Longmeadow Planning Board, lives on the Enfield border. He said his family has taken advantage of businesses in both states within a 10-mile radius of his home.

“Since Connecticut claims to be a ‘regional’ partner with Massachusetts, from the beginning, similar quarantine policies and social distancing measures have been observed by all,” Gunn emailed.

Michael Ludwick, the mayor of Enfield, agreed. Town officials have been working with businesses for weeks ahead of Wednesday. Even before, visitors to businesses here have been following rules. While some research has found grounds for concern about disparate openings along state lines, adherence to local rules should prevent major problems.

“For the most part that hasn’t been an issue,” Ludwick said of travelers from up north. He pointed added that this crisis was affecting both sides and was a not a time to alienate people. “We want to have a good relationship with our folks in Massachusetts.”

While headcounts must remain low, Connecticut offices can reopen with restrictions, too. Limits numbers of Massachusetts offices workers can return next week. Both states are encouraging employers to continue working from home. Many are obliging, such as MassMutual which has employees in both states.

While some may eschew inessential activities, people are traveling. Gunn observed that people from both Massachusetts and Connecticut were crossing state lines even before reopening began.

“I have no concern about Longmeadow residents crossing the border and returning safe and healthy,” he wrote in his email. “By this point in time, we are all conditioned to following public health directives and using common sense.”

Earlier this week, The Hartford Courant reported that Fairfield County was not especially worried that cooped-up New Yorkers would be streaming across the border. Restaurants with outdoor space in Greenwich, Stamford and beyond were preparing for some influx of regulars from Westchester County. Officials did not express much alarm either.

Restaurants in downtown Stamford are among those in Connecticut reopening by taking advantage of the sanction of outdoor dining. (via wikipedia)

In Massachusetts, there does not seem to be much public health concern about residents traveling travel to Connecticut and Massachusetts. Although, Bay State officials did observe that the state still a quarantine order for out-of-state arrivals.

“Individuals entering Massachusetts are instructed to quarantine for fourteen days,” a spokesperson for the Massachusetts Executive Office of Health and Human Services said of people returning from states like Connecticut.

The spokesperson did not otherwise directly address the issue of Connecticut’s reopening. However, he noted that the commonwealth was part of a six-state council “to facilitate coordination among the region’s plans to reopen economic activity.”

Three of Massachusetts’s neighbors, Connecticut, New York and Rhode Island, are in that council.

“Recognizing that economic activity throughout the region is based on a high degree of integration, the council will work to ensure businesses can resume with measures in place to protect against the spread of COVID-19,” the spokesperson said.

The office of Governor Charlie Baker did not respond to request for comment about any discussions he may have had with Lamont about commerce across the Connecticut-Massachusetts line.

During COVID-19 briefings in Springfield this month, Baystate Health’s President & CEO Dr. Mark Keroack acknowledged that reopening the economy could increase the spread of COVID-19 disease. However, Keroack, who also serves on Baker’s reopening council, suggested that when it came to differences between states’ reopening places, what matters more was reacting quickly when spikes appear, regardless of source.

“Jump on them and contain them quickly,” he said. As for reopening, “Let’s see how this goes. See if there is an uptick.”

Springfield’s Health and Humans Services Commissioner Helen Caulton-Harris said there is no formal “mutual aid and protection” agreement for public health between Massachusetts and Connecticut. However, as her department has with other diseases, she said she would alert and has alerted Hartford health authorities about potential spread when confirmed Springfield COVID-19 cases have contacts in Connecticut.

On a practical level, hardly everything is open relative to Massachusetts.

Connecticut communities themselves are still transitioning. Just on Wednesday, Ludwick said Enfield leased a former bank near town hall so residents could pay bills at its drive-up and maintain distance. 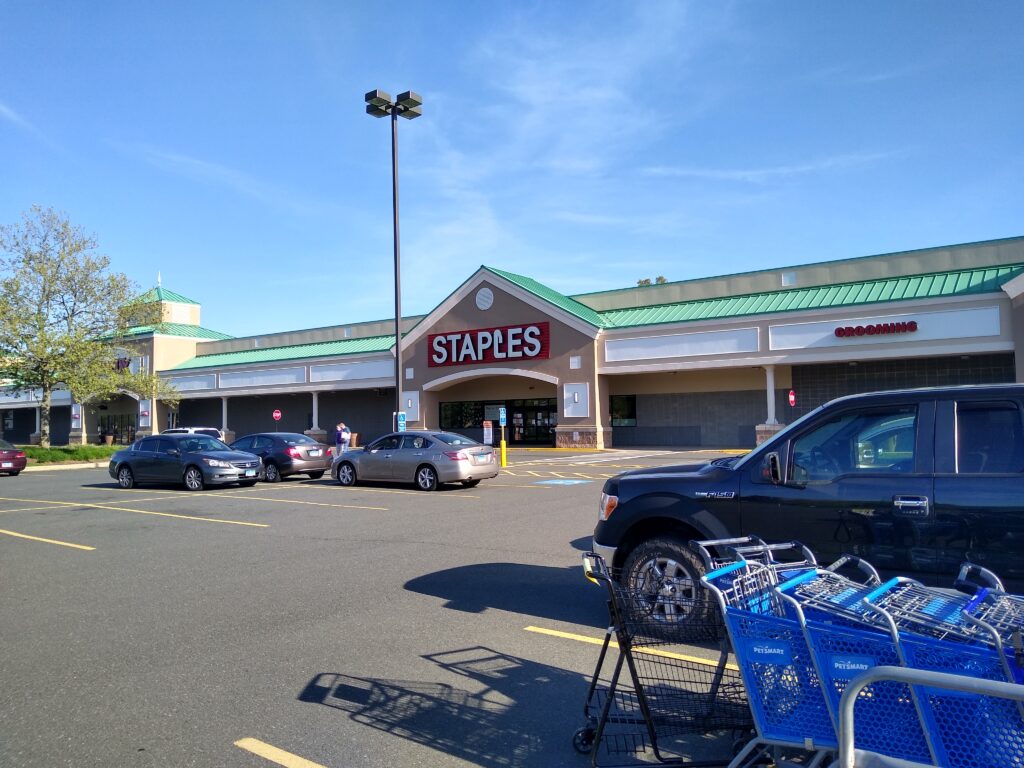 Reopening? Staples has got that in Enfield T.J. Maxx? Not yet. (WMP&I)

Many big box stores and name brands with outposts in Holyoke like Best Buy and Barnes & Noble have stuck only doing curbside pickup. Others like T.J. Maxx and Bed Bath & Beyond were not yet open. The Enfield Kohl’s opens Friday according to a sign in the window. However, Staples and Petsmart appeared open. Businesses that never closed like Home Depot and Target seemed busier than they had in weeks.

Few restaurants here in Enfield could squeeze in outdoor dining if they wanted to. Even Red Robin here, which has a patio, is sticking to take-out and delivery for now.

Figaro Ristorante, which has takeout, too, did not respond to an email requesting an interview. Its Facebook page described their rules for outdoor dining, consistent with Lamont’s executive order. Their tented area features will include eight socially distant tables for first come, first serve dining starting Friday. Guests can stay for 90 minutes and must wear face coverings when not eating or drinking.

Some restaurants here with counter service had not yet restored outdoor seating. The Chipotle and Starbucks’s patios still lack tables and chairs although they could put them out. The new Panera did have outdoors seating available, which a couple of diners were using.

Outdoor dining could be a bigger deal further south in Hartford and West Hartford. Those communities have more sidewalk and street space for restaurants to utilize.

Party at Ned’s house? Err…state…obviously we can’t all distance at his house…even the one in Greenwich. (via wikipedia)

Governor Lamont’s office and the Connecticut Department of Public Health also did not respond to requests for comment about the impact of the reopening along the border.

Mayor Sarno pointed out that while some restaurants in Connecticut have opened, many have not because limited outdoor seating may not be worth the expense.

“It didn’t make sense for their price point,” he observed.

It is not clear when Massachusetts eateries can reinstitute table service or under what conditions. This almost certainly will not happen before June 8, the earliest date Phase 2 reopening could begin. Baker’s outline remains a work in progress and it is not clear if only outdoor seating or limited indoor seating will be permitted.

“As soon as we’re ready to go,” Sarno said of the state’s green light, “we want to get our restaurants open and ready to go,”.

Gunn, the Longmeadow Planning Board member, worried about the disparate impact on his town’s businesses. He wished that Baker had synced Massachusetts reopening with Connecticut’s. Some restaurants in Massachusetts have survived on take-out alone, but that may not last.

“I expect by late June when the next phase of openings are announced, many small business will have failed and will never reopen,” he said.

Connecticut is not expected to allow indoor seating before June 20. Bar areas will likely remain closed until July. However, Connecticut restaurants are lobbying Lamont to consider an earlier indoor dining date. Therefore, it is possible the advantage could swing to Massachusetts, if briefly, later next month.

Ludwick acknowledged his community did have an edge for now, but disclaimed any interest in taking advantage of it. Instead, he felt the crisis,  was an opportunity for Enfield, surrounding town, and their North Central Health District to develop closer health  and economic ties with Greater Springfield.

“We’re hoping to build off of this and turn it into a positive,” he said. “There is a lot of connectivity in the region, which is a good thing.”

One area that the commonwealth will have the jump on the Nutmeg State is barber shops and hair salons. They were to open in Connecticut this Wednesday, too. Lamont pulled the hair clippers’ plug amid heavy lobbying from stylists themselves.

Many—though hardly all—demanded more time to prepare and Lamont obliged, pushing the date to June 1. Baker’s opening plan in Massachusetts will bring relief to the commonwealth’s shaggy masses on May 25.