As COVID’s Grip Loosens, the Senate Campaign Returns to Life…

This is the second of two assessing how the outbreak has altered top-ticket Bay State races. 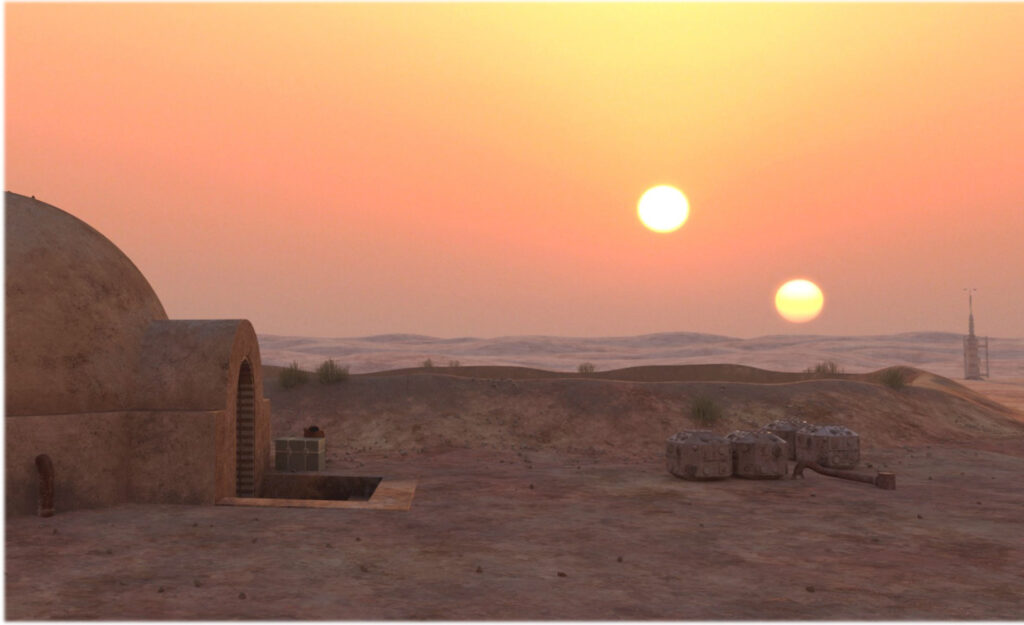 A desert campaign planet no more? (via Lucasfilm)

HOLYOKE—Standing in a grove of trees off Route 5 and framed by Providence Behavioral Hospital, a senator seeking reelection lent his voice to staff unions protesting a reduction of psychiatric services. Two days later, the congressman challenging that senator was a few miles up the road. He was at his third of four stops in Western Mass that day related to COVID-19 relief. Both events could be mistaken as entirely typical of a heated Senate race but for the masking of nearly all faces.

Politics is reemerging from behind the shroud of the coronavirus. Even as events like the death of George Floyd and the subsequent protests rip the headlines from COVID-19, the disease continues to set the terms by which life can crawl back toward normal. That includes the Democratic primary contest between US Senator Ed Markey and Newton Congressman Joseph Kennedy, III. However, visits to the 413 and Monday’s debate in Springfield underscore the impact the return of campaign life could bring.

Both candidates have been traveling to Washington for votes in their respective houses of Congress. However, both also essentially ceased in-person campaigning and event as COVID-19 restrictions set in. Now that the peak has passed and things have begun to open, Kennedy and Markey are hoping to restore some in-person, social distancing-compliant activities.

“Great to be out of my attic!” Kennedy said to the press at a stop in Westfield last Tuesday. “The best part of campaigns is being able to be meeting people,” he later added.

A reanimated campaign? (via Lucasfilm)

The campaign had already begun to simmer again after Kennedy released his first ad, which he partly produced himself from with a smartphone. For much of the time since the lockdowns, the candidates had been restricted to a war of livestreams featuring a mix of celebrities, experts, sportswriters and chefs. 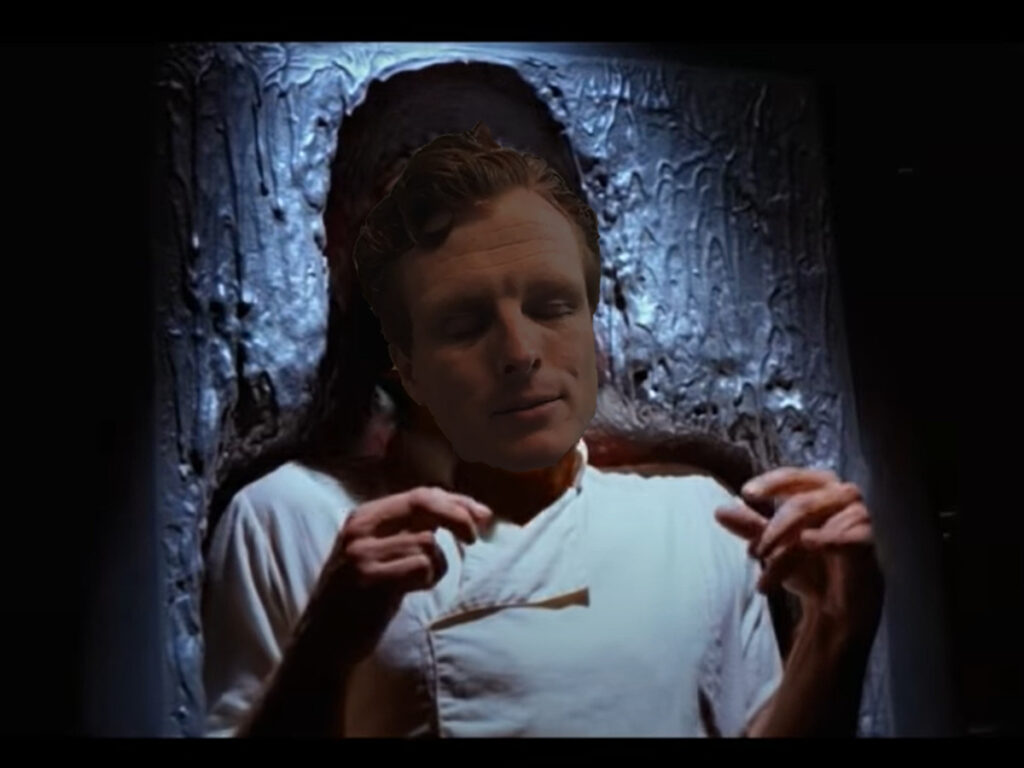 Out of the attic and off Jabba’s wall? The virus may not have encased the campaigns in carbonite, but now they are awakening from Zoom hibernation. (created via images from Lucasfilm & Facebook/Kennedy campaign)

For now, it is likely that COVID-19 will color candidates’ activities outside their home. However, the candidates’ second outing on the debate stage will allow them perhaps the closest thing to campaign normality in a long time, namely in the form of pressing their messages.

Kennedy visited the Holyoke and Westfield Boys & Girls Clubs and other locations in Greenfield and Springfield last Tuesday. Both clubs are grappling with the restrictions the pandemic has placed on their operations. Programs are greatly curtailed, if not closed and brown bag lunch operations are run out of both clubs.

At the Holyoke Boys & Girls Club here, Kennedy met with its president and CEO, Eileen Cavanaugh. She walked him through the changes the organization has gone through, but also highlighted the immense strain the social distancing requirements place on the club’s very mission. It used to aim to serve “more kids, more often,” but that is impossible even as the need balloons in a poor city like Holyoke.

“Not available to be a space for kids to come is going to reverberate in the community,” Cavanaugh told Kennedy.

When she observed that they are still waiting for more guidance from the state about how to run youth programs and its daycare facility—the club is an emergency daycare, but its larger program is closed—Kennedy noted that even that may not provide certainty.

“Driven by data is one thing, but it’s another if don’t have data,” he said. 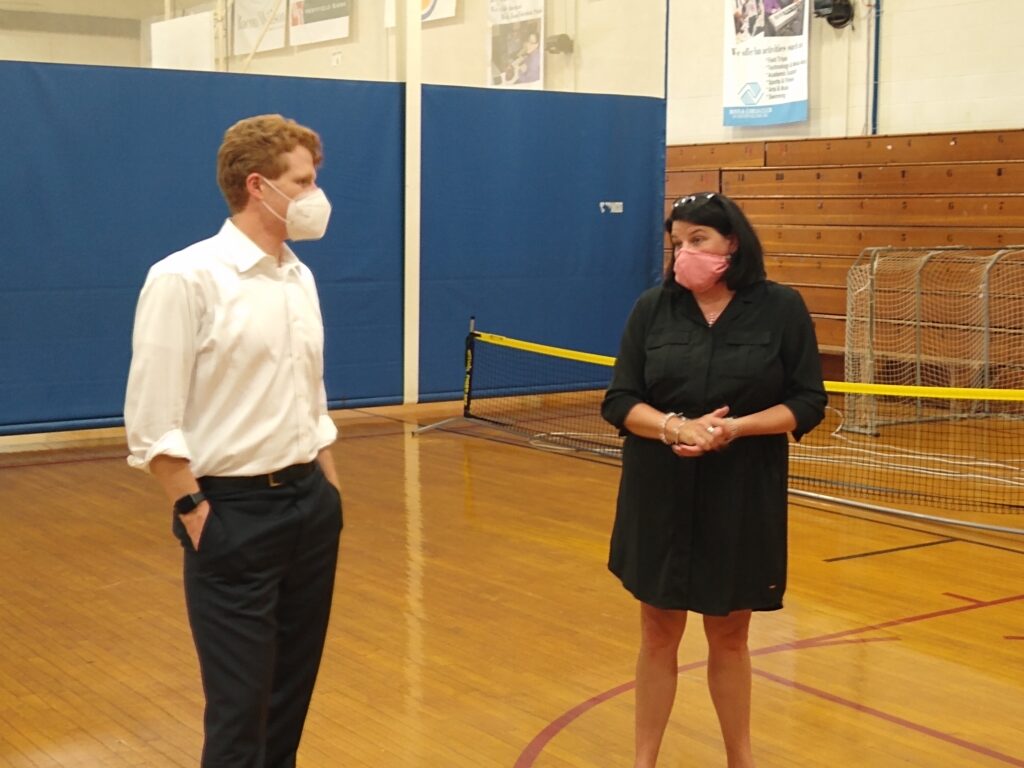 From the beginning, Kennedy has emphasized “showing up,” trying to draw a contrast with Markey. Kennedy and his supporters has alleged has taken the 413 and other further-flung areas for granted.

Markey’s camp has heavily disputed that and released another 20 endorsements from local officials ahead of Monday’s debate. He has touted recent local initiatives like a railroad safety bill. More recently, Markey introduce a bill to support additional rail infrastructure, which appeared a shot across Kennedy’s bow given his support from East-West rail advocate State Senator Eric Lesser.

In the short-term, Markey may have more to gain from the loosening of the lockdown. For better or worse, Kennedy’s name gives him an introduction with almost any voter. Markey, however, is not as high-profile as his colleague, Elizabeth Warren. Returning to the trail gives him a chance to broadcast his work as a senator on behalf of the state and its regions. 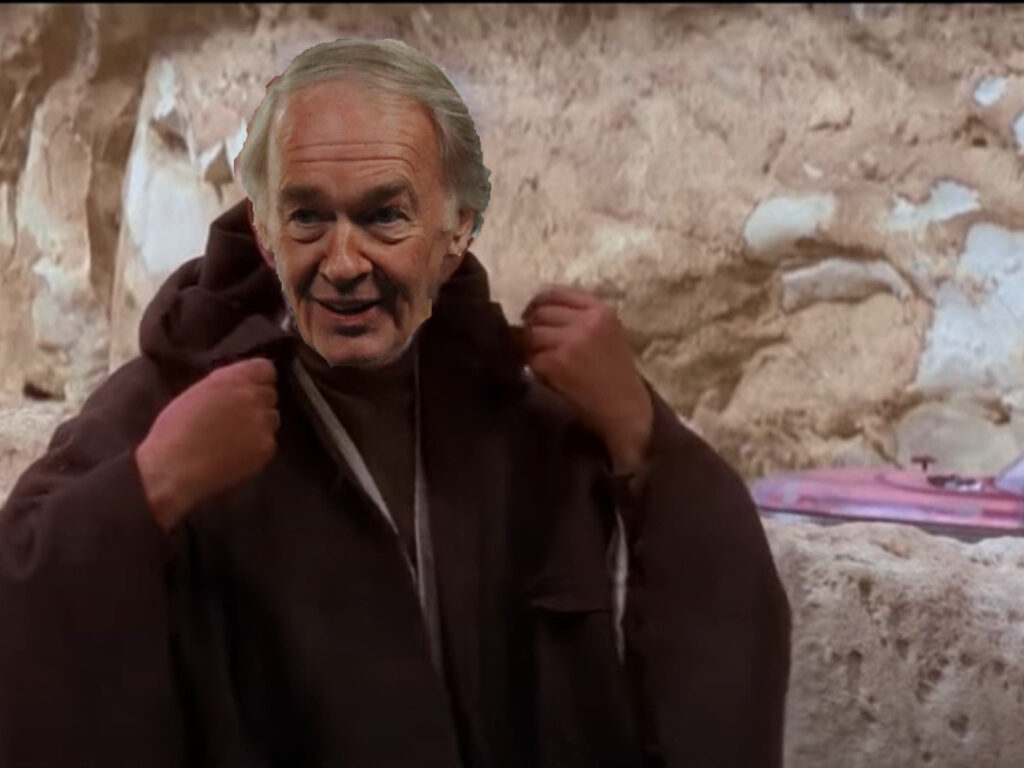 A new hope for semi-normal campaigning? (created via Lucasfilm and Facebook/Markey campaign images)

The senator’s visit last Sunday to support Providence Hospital staff’s effort to save the psychiatric bed provided a key backdrop to plug his attention to the area.

Standing side by side, if socially distanced, with leadership of the unions representing hospital workers, Markey urged the state to reject the closure. Union officials said the shutdown would bring dozens, perhaps hundreds of layoffs. It would especially burden families with children in need of inpatient psychiatric care.

“When their children are here, we’re the ones that take care of them,” said Traci Ellithorpe, a Providence Hospital mental health counselor and official with United Autoworkers, Local 2322.

The issue has become a local flashpoint as it could leave the closest inpatient services as far away to Connecticut or Vermont. State authorities have so far not approved the plan Trinity Health of New England—Providence Hospital’s owner—put forward. Markey promised to lobby Governor Charlie Baker to use his administration’s authority to keep the beds open.

“We’re going to find there are going to be a lot of mental health issues,” arising out of the pandemic. 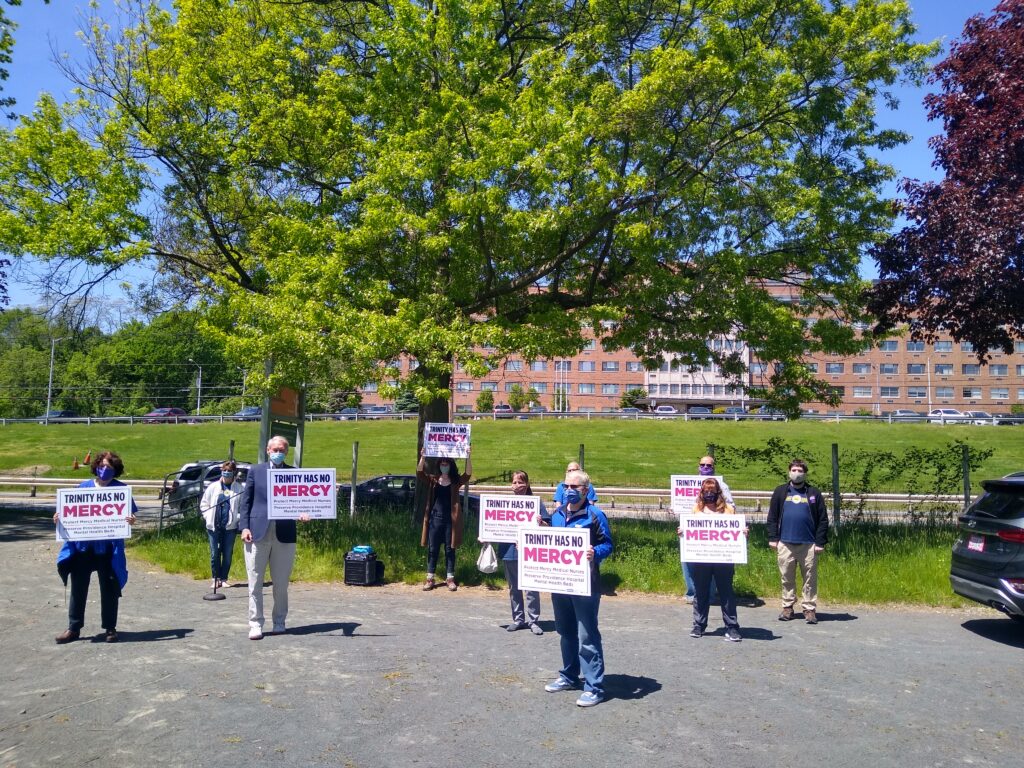 Trinity, in a statement to the media, said it respected Markey’s position, but said that its efforts to recruit sufficient psychiatrists to staff the facility full-time had failed. The unions have vigorously disputed that claim.

The debates, while not the same as in-person campaigning, will be another move toward political normality. Both COVID-19 and a Minneapolis police officer’s murder of George Floyd and the subsequent protests and unrests will feature prominently. However, the candidates will likely try to hone their own message, too.

The debate Monday will be broadcast from Western Mass News’s studio in Springfield and feature media panelists and moderators primarily from Boston-area outlets. However, the Springfield station’s former anchor Dave Madsen is among the moderators.

Markey is likely to play up these local efforts in the coming debates and counter the allure of Kennedy’s promise of being present more.

I am proposing that we invest $5 billion annually to rapidly expand and improve passenger rail across Massachusetts and the country. pic.twitter.com/Kw7VXkFWHt

Kennedy has indicated he will go on the offensive in coming debates, challenging Markey’s progressive credentials and judgment on issues from voting for the Iraq War and the Telecommunications Act of 1996.

Markey would likely dismiss these as dredged up attacks, ill-suited for the moment. Usually, Kennedy applauds Markey’s career, but implies the moment, even pre-COVID, calls for something different. Speaking to the press in Westfield, he landed the blow subtly.

“The normal that we had before was in so many ways broken,” he said.

Still, some more explicit jabs could bolster Kennedy’s regional pitch. While Markey will highlight his efforts to get WWLP back on the air in Berkshire County, Kennedy may argue that telecom bill frustrated efforts to bring modern, high-speed Internet access to rural Western Massachusetts.

This underscores how important returning to the trail can be to develop local relationships. Kennedy raising the Telecoms Bill evolved from connecting with telephone workers who remains sore about the bill. Neither UAW 2322 nor the nurses association have endorsed in the senate race yet. Markey’s show of support for them could pay dividends down the road.

This weekend would have been the MA Dem Convention. But because we aren’t able to be together – we held our second ever Kennedy Regional Organizing Convention, virtually.

Thank you to the hundreds of volunteers who joined us today. Let’s organize. Let’s fight. Grateful. pic.twitter.com/2zaCgEd89P

Other opportunities to connect with new supporters personally have also been lost. Both campaigns released messages to their supporters on May 30, which would have been the date of the state Democratic convention, but for the novel coronavirus.

The digital platforms available to the campaigns have been a lifeline to maintain engagement and support. But ultimately, the election will not be decided by those reached on Zoom or Facebook. As much as things have changed, politics remains a people business best done in-person.