So It Begins, the Air War for the First Congressional District… 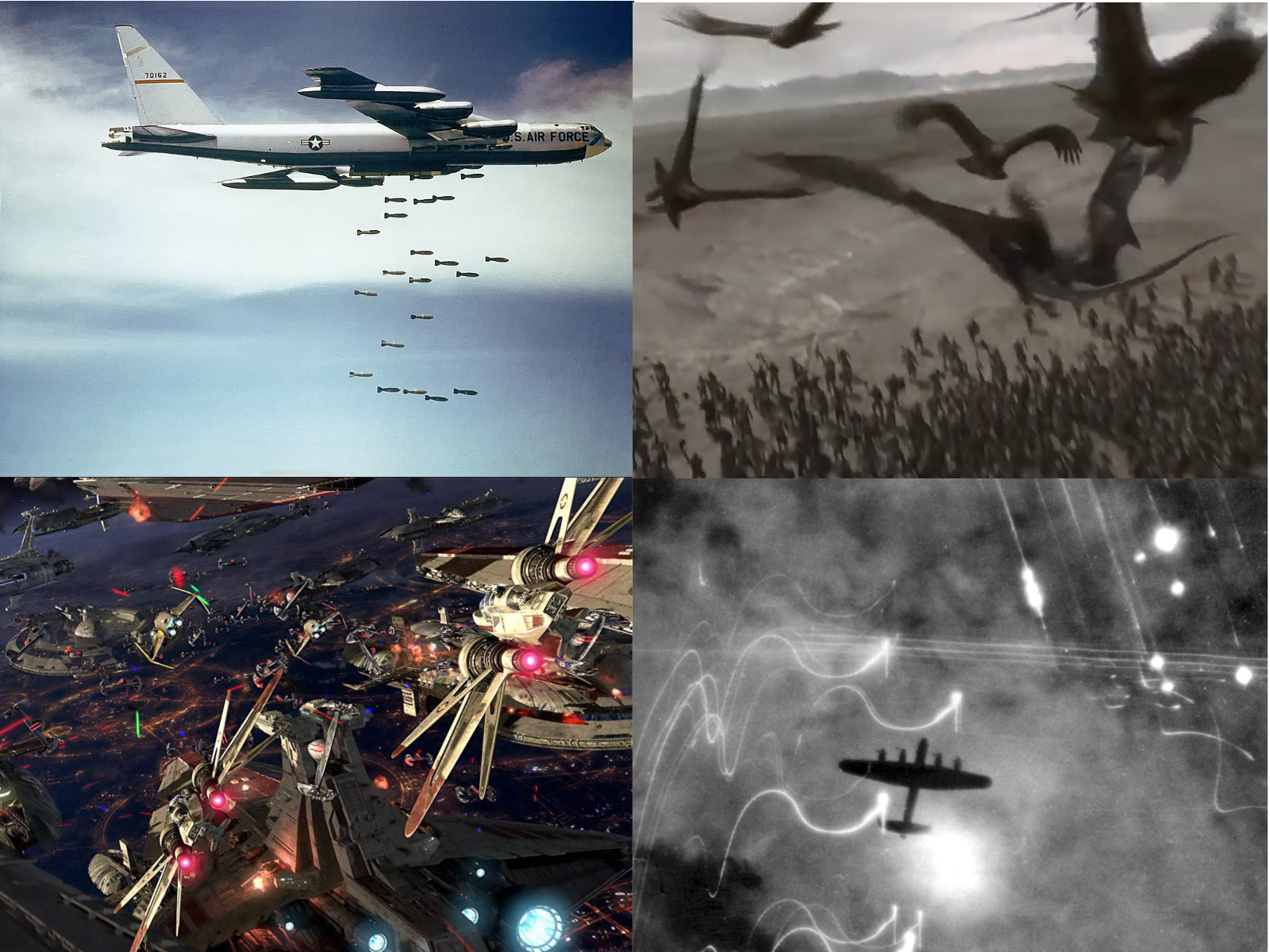 The battle for the air has begun. (images via Wikipedia, Lucasfilm & New Line Cinema)

United States Representative Richard Neal had the airwaves mostly to himself for all of June and the start of July. Last week, his Democratic primary opponent Holyoke Mayor Alex Morse went up on cable and broadcast television. However, the candidates for the 1st District’s Democratic nomination are no longer the only ones broadcasting. Third-party groups have entered the fray, mostly to pummel each the candidates.

Fight Corporate Monopolies (FCM), which formed under rules with fewer disclosure requirements, committed $300,000 to bombarding Neal on television. A much smaller investment from another outfit then began airing positive ads about the incumbent on radio. This week a labor-aligned group backing Neal promised to match FCM’s spending. Altogether, it has become one the largest deployments of air power specific to the region in many years.

With its relatively cheap media markets—Albany and especially Springfield—Western Massachusetts has had political aerial bombardments before. Participants in statewide elections have pounded the region with ads. Yet, local races rarely attract commensurate attention.

With the new commitments from third-party groups and reservations candidates have made, at least $1 million could go into television and radio ads in this race. Plenty of other races across the country easily cost more, but the figure remains notable for the region.

The full amount spent is not clear entirely clear. Because Neal had been on the air during the last reporting quarter, Federal Election Commission data is available to show he spent at least $200,000 on ads before the quarter closed on June 30. The report shows Neal bought airtime via his ad producer, Horgan Associates who actually placed the reservations.

Ad filings appear on the Federal Communications Commission’s website, but these are not necessarily complete. In a review of FCC documents, WMP&I identified as much as $600,000 in ad time that was reserved on behalf of Neal’s campaign after the FEC period closed. His reservations run through the primary on September 1

Some of that may actually date back to the last FEC quarter, though.

The full expense will probably not become clear until all FEC reports that run through the primary are available. Campaigns often revise and/or cancel ads. The last FEC report before the election will shed some light. Yet, because cable providers and TV stations bill differently, the August 12 cutoff for that report may not encompass all ad placements.

Because Morse did not advertise during the last quarter closed, FCC data is more clear. Records show Morse has reserved upwards of $110,000 in TV time. As of posting time, Morse’s ads run through August 2.

However, the outside money in the race dwarfs Morse’s investment and could even rival what Neal has thus far committed.

The Ways & Means Committee, which Neal chairs, has jurisdiction over healthcare and the tax code. Of the roughly $2.5 million Neal raised for his campaign in 2019, $48,000 came from Blackstone affiliates according to an analysis from OpenSecrets.org.

At the time FCM announced its move, Neal’s campaign alluded to the less transparent reporting requirements the group faces as a 501(c)(4) as opposed to a true political action committee.

“The inconvenient truth for this dark money group is that the surprise billing measure they support would actually hurt hospitals and workers in Western and Central Mass, so Richie proposed his own bill,” Neal spokesperson Kate Norton said in a statement at the time.

FCM did not respond to a request for comment about who its donors are. Earlier this month, Politico reported that FCM is an affiliate of the anti-corporate greed entity American Economic Liberties Project. Among its consultants are Bernie Sanders’s presidential campaign manager Faiz Shakir. Sarah Miller, who is Shakir’s wife, leads both groups according to Politico.

As it turned out, FCM would not be the only non-candidate entity going on the air. Earlier this month, a group called People over Profits began airing radio ads in support of Neal. The ads, which WMP&I heard on the radio last week, feature a male voice feting Neal for understanding the district’s needs.

Data from the FCC show that People over Profits reserved over $20,000 in airtime for radio stations in the Springfield and Worcester areas. FCC documents identify Matthew Josey, an accountant in Tampa, Florida, as the group’s contact. Josey did not respond to an email seeking comment.

However, far greater firepower on Neal’s behalf has landed.

On Tuesday, American Working Families (AWF), announced an ad targeting Morse. The group, which asserts it seeks “to stop wealthy corporations, special interests, and political insiders from polluting our democracy,” endorsed Neal in June. It has little money as of June 30 but AWF filed notice of $121,000 in spending with the FEC this week. The group has historically received infusions from labor union PACs per FEC data.

In a release, AWF said its “independent effort will seek to match outside spending by groups supporting Morse and opposing Neal.”

The minute-long ad takes aim at Morse’s progressive credentials by citing three police brutality cases that had been in federal court. After flashing quotes from court rulings about the incidents, the ad accuses Morse of remaining silent at the time of these incidents. Among the incidents was a case wherein Holyoke Police allegedly beat a 12 year-old boy. There is a 30-second version, too.

In a statement, Morse campaign manager Max Clermont said the primary case in the ad happened before became mayor.

“Alex has implemented a long list of police reforms in Holyoke, with no help from Richard Neal, and in 9 years as Mayor no officer has even had to fire a shot,” Clermont said.

The first incident the ad cites occurred two years before Morse took office in 2012. The city of Holyoke settled it sometime after 2012.

In an interview, Chris Keohan, an AWF spokespersonm, argued that even the first one is suspect because Morse “chose to do nothing except write a check from taxpayers.” Settlements are not uncommon and sometimes unavoidable as trying civil rights cases risks far larger judgments.

The latter two incidents the ad names took place in 2014. One case remains pending after the city failed to secure summary judgment in March. The other, which involved the minor, settled for $65,000 after the City Council approved the funding in February.

Following the killing of George Floyd in Minneapolis this past May, Morse announced a series of reforms to the Holyoke Police Department.

Neal’s campaign declined to comment on both People over Profits and AWF’s ads.

Ads the candidates themselves have been less contentious albeit not entirely.

Morse’s ad, which began running last week, features the mayor discussing his brother Doug, who died earlier this year due to an overdose. He describes the nation’s broken healthcare system as a factor in his death.

“Doug was a good man, but he fell through the cracks of our cruel health care system,” the mayor says in the ad. “Too many families in Western Mass know that same pain.”

Yet, the ad’s accusation that Neal is too cozy with drug companies “fueling this [opiate] crisis” likely provoked his campaign’s sharp response.

“Addiction and loss are not political footballs and invoking the loss of a family member in an attack full of lies is despicable and appalling,” Norton, Neal’s spokesperson said last week.

Morse fired back in a lengthy release calling the response “disgusting” and “tone-deaf.”

None of Neal’s ads have provoked such dueling statements.

In a series of ads circulating on television, Neal touts his work helping workers, businesses—primarily through coronavirus relief—and residents. One features residents of the Mason Square praising Neal’s efforts to keep a local bank open, which had been the focus of local news at the time.

At least one ad featuring two businesses had a controversial element. While some brandished torches and pitchforks on social media because the ad invoked helping a country club, the real problem related to the other cited business: Storrowton Village. The ad misidentifies the museum and banquet facility as being in Agawam when it is in West Springfield.

The Neal campaign said it was looking into how the error occurred.