The Gentleman from Georgia, Representative for Justice: John Lewis 1940-2020… 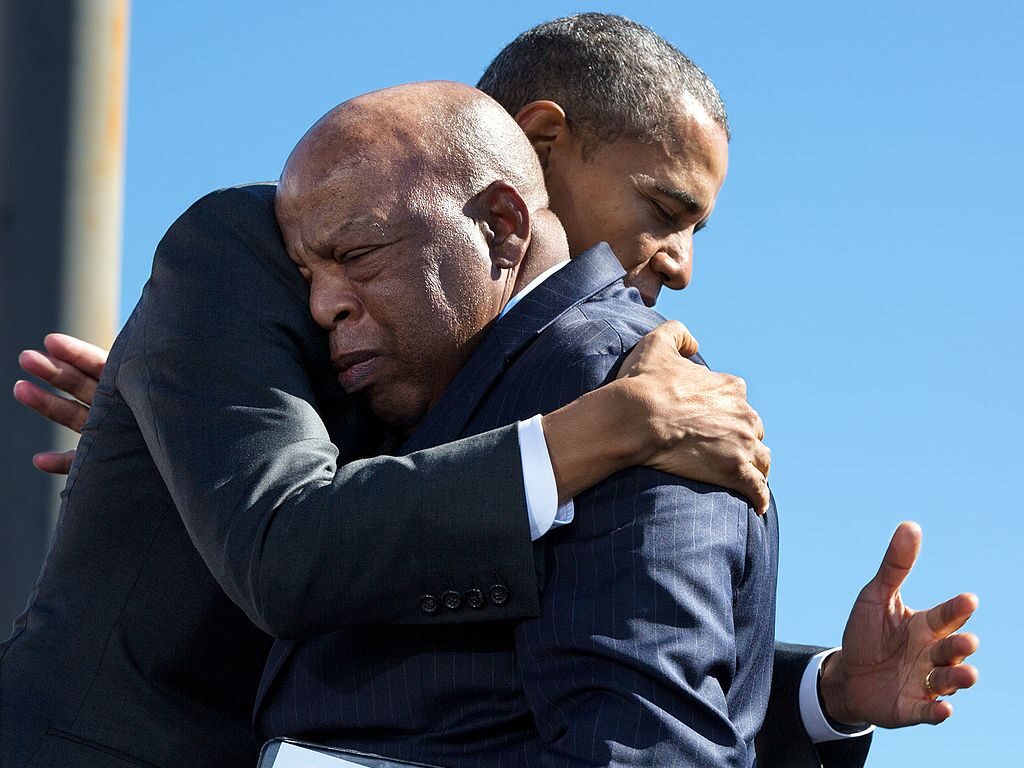 A man of many legacies. (via Wikipedia/Obama White House)

The Friday passing of Georgia Representative John Lewis reverberated into the world and across the political landscape. He had been the last living speaker from the 1963 March on Washington and an icon in Washington. The mentor to a president and a colleague in the House, pols throughout the country and the Bay State mourned his passing and celebrated his life.

Lewis, 80, had announced he had pancreatic cancer last December. His story place in the Civil Rights Movement began in college, but brought him to speak alongside Dr. Martin Luther King in Washington. In the House he would become an anchor of conscience for members of Congress of both parties.

In his statement on Lewis’ death, former President Barack Obama recalled the obligation to continue the ever-unfinished work of America. Specifically, he referred to speaking out and bringing about a better world.

“John Lewis — one of the original Freedom Riders, chairman of the Student Nonviolent Coordinating Committee, the youngest speaker at the March on Washington, leader of the march from Selma to Montgomery, Member of Congress representing the people of Georgia for 33 years — not only assumed that responsibility, he made it his life’s work,” Obama wrote.

Representative Richard Neal served with Lewis on the Ways & Means Committee, which Neal now chairs. In a statement last night, Neal said Lewis “showed us how love, kindness, and forgiveness are what truly make a person strong and great.”

Neal spoke to the press Saturday to remember his late colleague’s extraordinary life, his humility and his compassion.

John Lewis, second from right at the Lincoln Memorial in 1963. Seated at center is A. Philip Randolph. (via wikipedia)

“I was always struck by his modesty and the understanding that he is the last person to have spoken at the famous march on Washington in 1963 at the Lincoln Memorial,” Neal said. Still, to Neal the history was palpable like when he joined Lewis on a pilgrimage to Selma.

The congressman told a story about attending a luncheon for South African anti-apartheid leader, Archbishop Desmond Tutu. They heard during that luncheon that after being released from prison, Nelson Mandela wanted to have dinner with the prosecutor who had sought the death penalty in his case.  Neal later told Lewis he was not sure if he could ever do that.

“That just means I have to work with you more,” Neal recalled Lewis replying.

Lewis himself had left marks on the Springfield area as well. Neal noted that on Bloody Sunday in 1965, nearby nuns from the Sisters of Saint Joseph were the only ones that would treat protesters in Selma after Alabama state troopers attacked them in Selma.

In 2015, Lewis recalled that connection while in the region to speak at the commencement exercises of Elms College, which the Sisters of Saint Joseph founded.

Three years earlier, Lewis campaigned for Elizabeth Warren in Springfield, offering a rousing argument in favor of her election at Old First Church.

“John Lewis was a true American hero and the moral compass of our nation. May his courage and conviction live on in all of us as we continue to make good trouble for justice and opportunity,” Warren said in a tweet.

John Robert Lewis was born February 21, 1940 to sharecroppers in Troy, Alabama. Lewis began his work in the Civil Rights Movement protesting Jim Crow policies in Nashville. He later organized the earliest Freedom Rides and came to chair the Student Nonviolent Coordinating Committee. That year he was among the Big Six organizing the March on Washington. The 23 year-old Lewis worked alongside giants like King and labor leader A. Philip Randolph, who had tussled with Franklin Roosevelt over discrimination in defense jobs during World War II.

Raised sharecropping in Troy, AL, he fought for the people his whole life with a huge and loving heart.

He put it all on the line over and over again to better this world for all humanity.

Congressman Lewis, we love you. pic.twitter.com/4iOasnQAMy

Lewis unsuccessfully sought a seat in Congress from Georgia in 1977. He won an Atlanta City Council seat in 1981. There, The Washington Post reported, he earned enmity for proposing an ethics ordinance and opposing highway project on environmental grounds. Many black clergy supported the project. He entered the House after his 1986 victory over Julian Bond, a fellow Civil Rights leader.

Worcester Congressman James McGovern, who represents much of the Upper Pioneer Valley recalled Lewis as “a great man, but more importantly he was a very good man.”

Like many others, McGovern recalled Lewis’ interest in causing “good trouble,” fighting for what was right. “I will never forget getting arrested alongside John in front of the Sudanese Embassy as we protested the genocide in Darfur, or being part of a sit-in on the House Floor with him as we protested inaction in the face of gun violence,” McGovern said in a statement.

Lewis leading a 2016 sit-in on gun violence in the House chamber. (via wikipedia)

Other Massachusetts leaders echoed that sentiment.

“John Lewis was conscience, compass, and moral touchstone for Congress. For me, he was an inspiration and a leader I was blessed to know,” Senator Ed Markey tweeted.

Springfield Mayor Domenic Sarno, in a statement on Facebook, wrote, “From the front lines of history with MLK to BLM, from a young man to a statesman, Congressman John Lewis’s drive and passion for Civil Rights and ‘love over hate’ were unquestioned.”

In a tweet, Massachusetts Governor Charlie Baker called Lewis “a civil rights icon and an enduring advocate for justice and equality for decades.”

Lewis eagerly embraced other struggles for equality. The Atlanta Journal-Constitution noted his embrace of LGBTQ rights and same-sex marriage, which divided a movement anchored in the Black church.

But, as House Speaker Nancy Pelosi noted in a statement, it was all part of his moral leadership.

“In the halls of the Capitol, he was fearless in his pursuit of a more perfect union, whether through his Voter Empowerment Act to defend the ballot, his leadership on the Equality Act to end discrimination against LGBTQ Americans or his work as a Senior Member of the Ways and Means Committee to ensure that we invest in what we value as a nation,” she said.

Neal said Lewis, as a longtime member of the Ways & Means Committees often played a leadership role, even when not the most senior Democrat, in defusing tension. That was not uncommon during the many years when Democrats where in the minority. Though thoroughly Democratic, both parties respected him.

Last year, Republican Senator Johnny Isakson resigned due to progressing Parkinson’s. Before becoming a senator, Isakson has been a rep. As a freshman in 1999, Lewis introduced him to the House. Twenty years later, Lewis praised his old colleague as faithful servant of their home state.

When Isakson rose to thank him, Lewis returned, “I will come over to meet you, brother.” They embraced.

I am terribly saddened by the loss of a great man. @repjohnlewis was a man of faith, who fought every battle with dignity, including his last. His legacy and the lessons he leaves behind have touched us all, and my prayers are with all who loved him. We will miss you, my friend. pic.twitter.com/qbwWQBs4fs

“He was our bridge — to our history so we did not forget its pain and to our future so we never lose our hope,” former Vice-President Joe Biden said in his statement.

I know of no man with more courage than John Lewis. He was a giant walking among us. When I saw him, I couldn’t help but think one thing: “I haven’t done enough.” May his life and legacy inspire every one of us to strive for justice, equality and what is right. pic.twitter.com/jtoCnmjexz

Lewis was a model for many. His support for a former staffer kicked off the first national round of electoral resistance in 2017. Unsuccessful then, now that staffer, Jon Ossoff, is his party’s nominee for US Senate in Georgia.

Just after Obama was sworn in, the then-new president signed a photo, “Because of you, John.” In 2011, Obama awarded Lewis the Presidential Medal of Freedom.

February 15, 2011 — President @BarackObama at Presidential Medal of Freedom Ceremony: "And generations from now, when parents teach their children what is meant by courage, the story of John Lewis will come to mind…"

In his statement, Obama wrote he and Lewis had spoken during a post-George Floyd virtual town hall. Obama recalled how proud Lewis was to see a new generation standing up for justice, voting rights and seeking office. They, Obama told him, were his legacy.

“Not many of us get to live to see our own legacy play out in such a meaningful, remarkable way,” Obama wrote. “John Lewis did. And thanks to him, we now all have our marching orders — to keep believing in the possibility of remaking this country we love until it lives up to its full promise.” 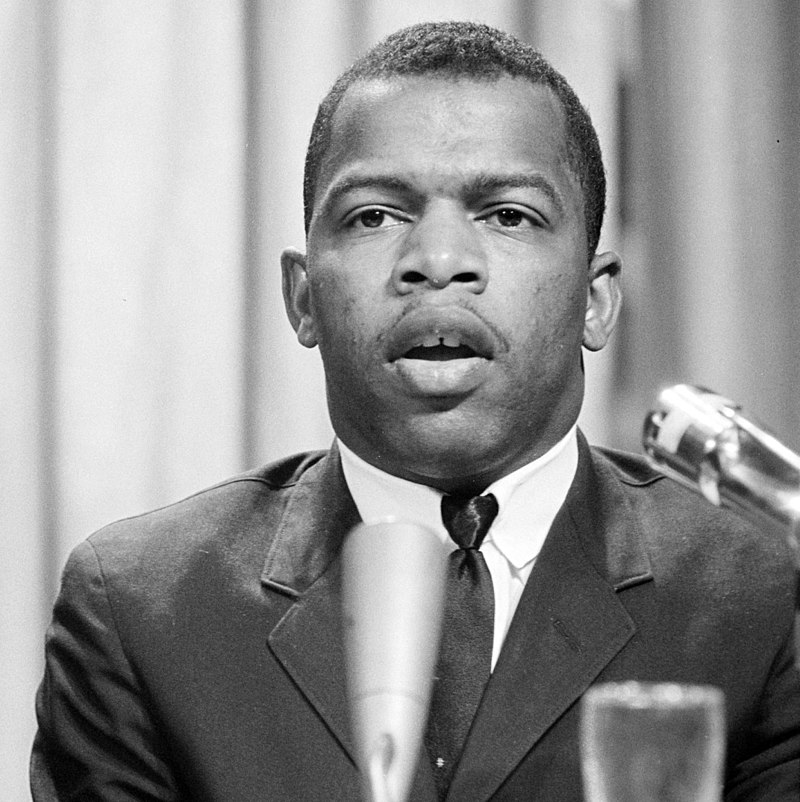