The Trans-Commonwealth RR: Lesser Wants to Open the East-West Throttle…

Don’t let his expression fool you. Lesser is thrilled to be meeting with critical stakeholders about East-West rail even via Zoom. (via Twitter/@EricLesser & Mattel)

The $50 million Longmeadow State Senator Eric Lesser secured in the Senate Transportation bond bill for East-West rail is unlike the previous budget orders on the subject. Those previous amendments, which either Governor Charlie Baker vetoed or the whole legislature could not agree to, were just studies. This measure could finance more concrete action.

But why seek this money when Lesser’s long-sought study—which Baker and friends ordered administratively—has not formally concluded? The answer lies in the master of our universe these days: the novel coronavirus. The institution of work from home to maintain social distancing could make living in the 413 more practical for those with Boston-based jobs. Yet, as fast as the virus changed society, the window to capitalize on this could easily close as rapidly.

“This actually is a moment if it is responded to in the right way and with some purpose,” Lesser said, “we can rebuild our commonwealth.”

The virus has laid bare inequities, both economic and regional, in Massachusetts. The 413’s poorer cities have avoided the public health catastrophes found elsewhere in urban Massachusetts like Brockton and Chelsea. However, shutdowns and social distancing required to contain spread, pending a vaccine or treatments, have ravaged hospitality and higher education.

These industries define much of the postindustrial economy of Western Massachusetts and often pay at the lower end of the economic spectrum.

“Coronavirus is really revealing the inequalities and gaps in society we long knew were here,” Lesser said in a recent phone interview.

Ever since emerged as a political figure, Lesser has been trying to string together the commonwealth with rail. (created via wikipedia & Lesser campaign images)

Since he began his political career in 2014, Lesser has preached the virtues of better rail connections between the Massachusetts Occident and the Hub.

Tech, healthcare and other professional jobs had been exploding in Boston and putting extreme pressure on housing prices.

Meanwhile, Western Massachusetts continued its decades-long stagnation. Better rail connections could allow those with work in Boston to live out West. After years of pushing, Lesser got his study. For much of this time, however, Lesser spoke about it as a medium to longer-term project.

Many of the concepts the Massachusetts Department of Transportation (MassDOT) is considering would require millions, perhaps billions in infrastructure investment. That does not even include negotiations with CSX—which owns the line west of Worcester—and Amtrak, which operates the only once-daily service between Boston and the 413.

Separate from but related to the rail push has been Lesser’s support for policy that would encourage those who can telecommute to relocate to the West. The advent of working from home during COVID-19 revealed one way this could work. Post-coronavirus, many working from home now may still have office, but not go in every day. Living farther away could be more practical.

“This is the gamechanger. All of these things are working in concert,” Lesser said of how the outbreak could change working.

Parts of Connecticut, with rail to New York, have experienced such a boon. New Yorkers have fled to the Constitution State where lockdowns are less harsh and from which they can commute to the city post-pandemic.

Although the Beforetimes may seem like millennia ago, the crisis has advanced quickly. It is plausible, if not at all certain, that an end could be within a year’s time or less if vaccines become available. In other words, waiting for a massive infrastructure project to connect Springfield and Boston could come too late to help the 413.

Hence Lesser’s push for funds that could further an interim solution. He highlighted a document from TransitMatters, a transit advocacy group, that suggested fairly minimal investments could get trains rolling to Boston from Springfield or even Pittsfield fairly quickly.

Put another way, high or higher-speed rail may not be necessary to start service people transplants to Western Mass would use.

“That’s kind of why I put so much in this bond bill,” he said.

Reached for additional clarification, TransitMatters’ Director, Jarred Johnson, referred to a memo that outlined how service could start relatively quickly. It appeared, in part, to rebut unfriendly conclusions the study committee has released. 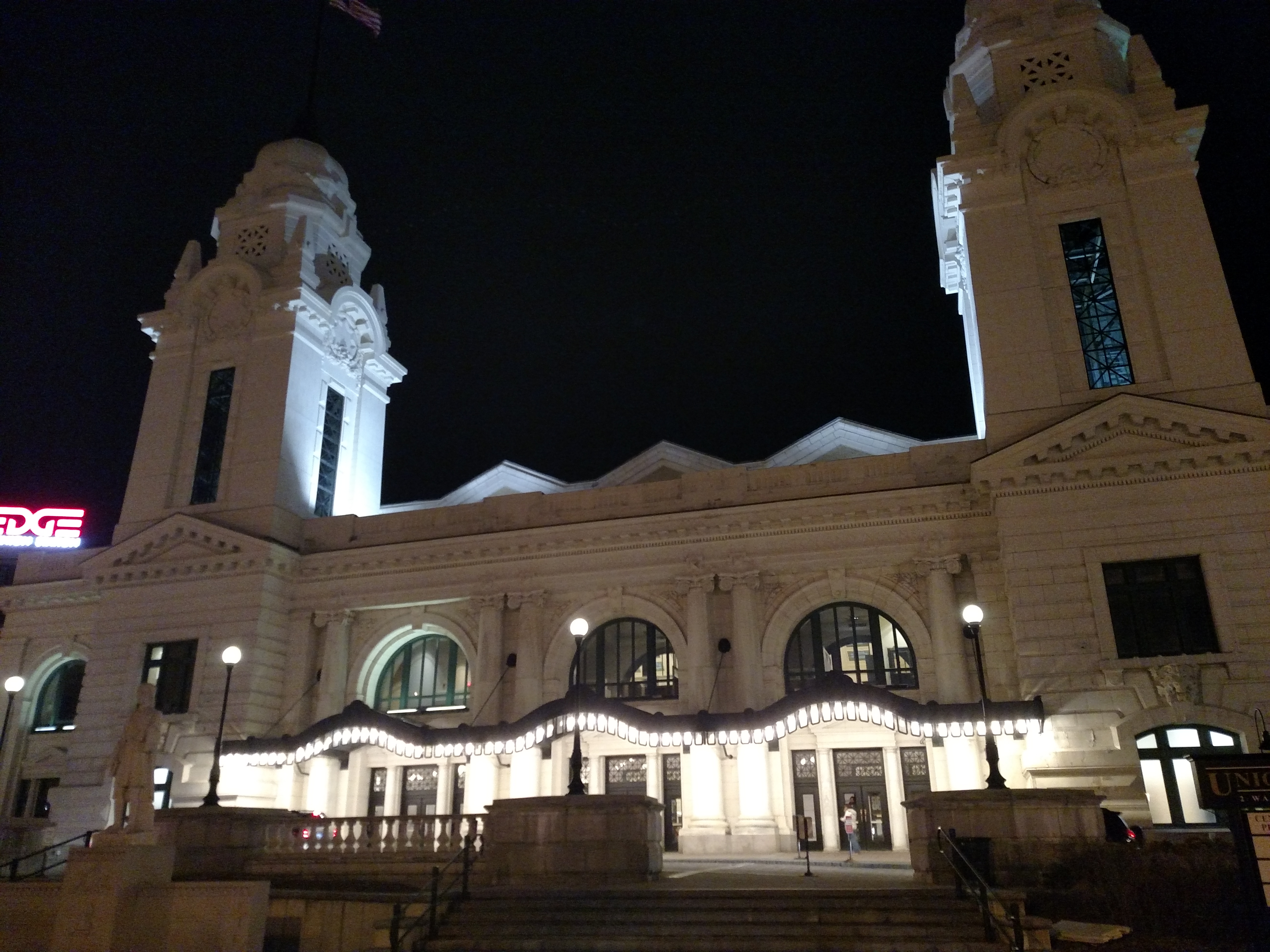 Worcester, the starting point for a prompter beginning of service to Springfield & beyond? (WMP&I)

The memo envisions extending existing Massachusetts Bay Transit Authority Worcester Line service to the 413. The memo says the MBTA already moves empty equipment to Worcester for daily eastbound trips because Worcester has limited storage capacity. A train originating in Springfield—which has some space—could fill that gap without a non-revenue equipment movement.

The report also notes that with minimal construction, trains could originate in Pittsfield—and ultimately Albany. Operational and dispatching changes could shrink travel time from 150 minutes—Amtrak’s average—to just over two hours. Trains could leave early enough for Boston commuters. Yet, many who work from home part-time may not even need to be in Boston by 9am.

One hitch is that the MBTA would need to obtain trackage rights from CSX. Much of TransitMatters’ argument could probably still apply if the commonwealth paid Amtrak to run the service. It does this with the Greenfield to Springfield Valley Flyer. The Flyer has the benefit of operating on state-owned track, but Amtrak already has trackage rights in CSX territory in Massachusetts.

The money in Lesser’s amendment could cover the many startup costs in TransitMatters’ proposal or something similar. Among the things it could fund are rolling stock, permitting, construction, design and land procurement.

However, Lesser’s amendment is not law, yet. The House must pass it, but the lower and upper houses of the legislature have been jousting over the transportation bill.

Baker has not exactly been wild about East-West rail either. His administration only ordered the wildly popular study as the election calendar loomed. Interim findings have raised fears among rail advocates that MassDOT is trying to bury the project. 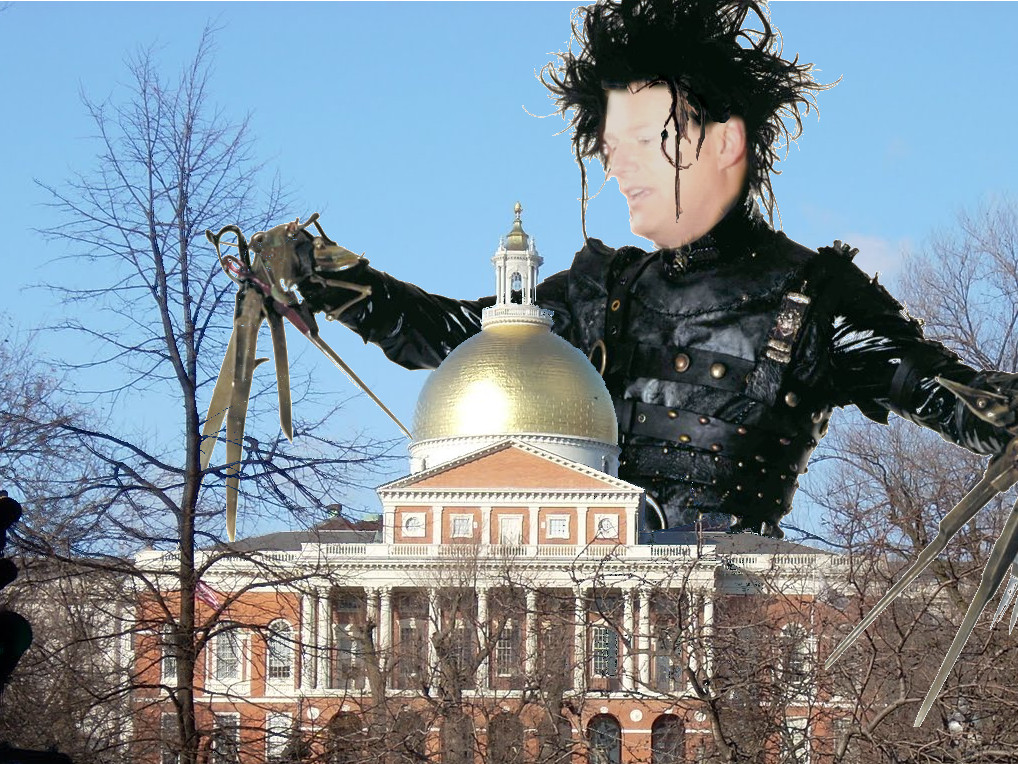 While COVID has blown a hole in finances, a bond bill doesn’t create immediate obligations. Were Baker to cut East-West language, it would be about policy, not money. (created with WMassP&I 20th Century Fox images)

Baker could veto the funds should they be in the transportation bond bill. If the legislature does not extend its session beyond July 31, no override this year is possible.

Baker’s office would not say whether the governor would veto the language in Lesser’s amendment. A gubernatorial aide told WMP&I the administration will carefully review any legislation that reaches the governor’s desk.

As a rail evangelist, Lesser has usually focused on East-West rail in high-speed terms, which would require a large investment. However, his current push is not a radical shift either. He has pointed to Worcester’s transformation thanks to expanded commuter rail, an entirely conventional service. Indeed, plans are underway to build a second platform there to improve capacity.

The competing pressures of the pandemic and its unknown duration make more immediate action more urgent. Some service could be just the beginning.

“It wouldn’t be high-speed. It would have some level of service,” Lesser said.

With the potential changing patterns of work, he added, “It becomes very workable and very real,” he said.