Briefings: To Protect the PO from Trump, Neal Heads West… 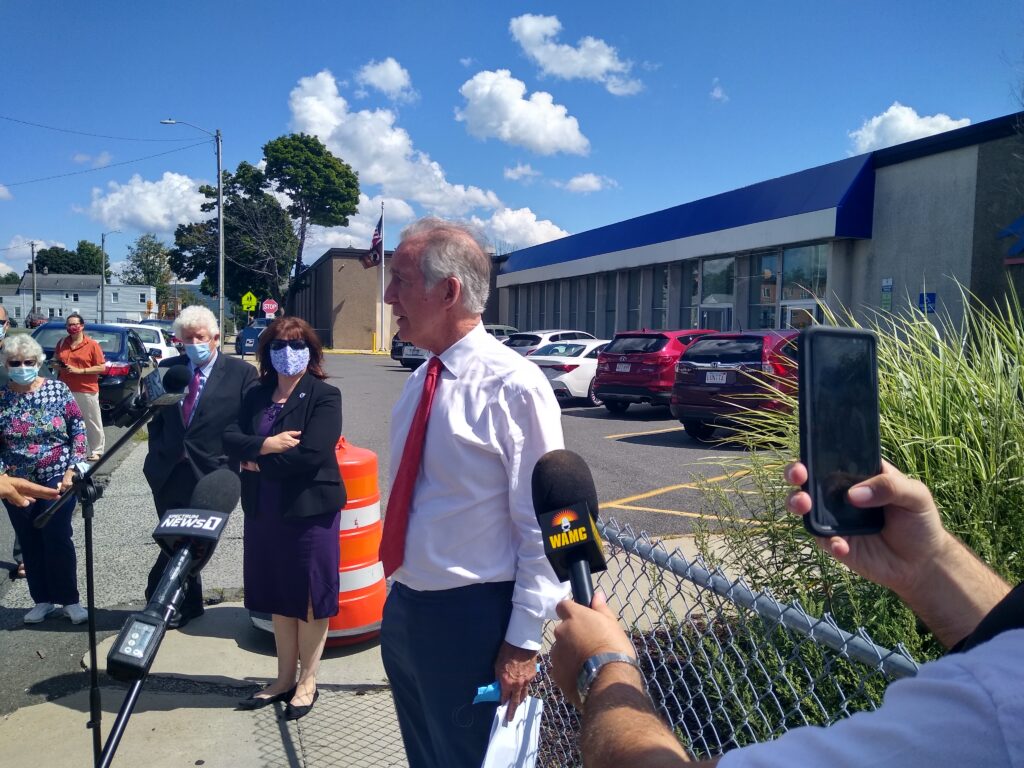 Congressman Neal defends the Post Office to the press as State Rep. Farley-Bouvier and other Pittsfield notables look on. (WMP&I)

PITTSFIELD—While attempting to maintain social-distancing along a narrow strip of sidewalk outside the post office here, US Representative Richard Neal and local officials condemned the chicanery of Donald Trump’s Postmaster General Louis DeJoy. Allegedly undertaken to save money, the changes to the United States Postal Service have delayed deliveries, reduced capacity and prompted fears millions of ballots Americans are requesting during the COVID-19 pandemic will not arrive on time.

With Neal were State Senator Adam Hinds, State Rep Tricia Farley-Bouvier, residents who rely on the mail and those who work with the elderly. Democrats have staged similar nationwide to protest the changes. They scored a partial victory later Tuesday when DeJoy paused his alterations until after the election. House Democrats will return to Washington this weekend to pass legislature to stop meddling with the Postal Service.

“I want to call attention to the fact that ballot access in a representative democracy is fundamental,” Neal said. Some of the proposed changes, he continued, “hint strongly at voter suppression.”

He noted that perhaps 40% of Americans could vote by mail this year because of COVID19.

Sprinkling in some history and postal arcana, Neal defended the agency as essential to Americans. The elderly, particularly during the pandemic, rely heavily on it.

The House will consider legislation to halt postal changes through 2020, restore equipment and fund the Postal Service to obviate the changes. In addition, the House and Senate have oversight hearing scheduled. The House passed a COVID-19 relief bill in May that gave the Post Office funds, but the Senate has not acted on it.

“That’s what we would push for,” Neal said of restoring dismantled sorting machines, “and the argument we will offer is we’re going to give you the money to put them back online.”

Trump has savaged the Post Office for years. Among the reasons are The Washington Post has written many an exposé about Trump and its owner is Amazon founder Jeff Bezos. Now, screwing the post office may be Trump’s only hope for reelection if polling is accurate.

Although in-person voting will continue, like many states, Massachusetts leaned into mail voting this cycle due to the pandemic.

Twice? We have to make sure the postman keeps ringing at all! Sen. Hinds with Neal in Pittsfield. (WMP&I)

“We made a very clear choice during the time of global pandemic, that the best way to protect democracy, to protect voters, to protect poll workers, to protect our seniors, is to make sure that we have a robust vote by mail system in place,” Hinds said.

Pittsfield and the Berkshires have large elderly populations for whom the mail is not just a delivery service, but also human contact.

“The one solid thing that could count on, during this period of crisis, of fear was their mail. To have that diminished is simply unconscionable,” Pittsfield Council on Aging chair Theresa Bianchi said.

Neal’s event came a day after debating Holyoke Mayor Alex Morse, his challenger for the Democratic nomination. They debate again Thursday on WWLP.

Holding his district’s event for a nationally coordinated effort here is notable. Morse probably cannot beat Neal without Berkshire County. However, Neal planted a flag after redistricting moved the Berkshires into his district and he maintains an office here. His engagement earned him the support of four out of five of Berkshire legislators including Farley-Bouvier and Hinds.

That feeling is not universal. Morse has received the endorsement of four city councilors here. On Tuesday, he announced endorsements from 20 town officials throughout the district including seven from Berkshire County. For more endorsed him after this article posted.

On Tuesday afternoon, however, Neal’s focus was the Postal Service. The Berkshire Eagle has reported that prior to DeJoy’s reversal, changes were already underway at the bulk mail center in Springfield, which serves much of Western New England.

Neal said his office learned about the dismantling within the past week. He added that he would be following the situation to head off potential job losses.

Many changes DeJoy, a longtime GOP fundraiser, had been pursuing could hurtle the Postal Service toward another longtime conservative dream: privatization. That will not have Neal’s support. He noted that it was already one of the most popular institutions in America. It is also among the most responsive to calls from his office.

“I’m never going to go along privatization,” he said. “Nope!”