Our One Hundredth: In the West, Markey Stares down Lingering Critiques…

Our One Hundredth is an occasional series on Massachusetts US Senate elections. 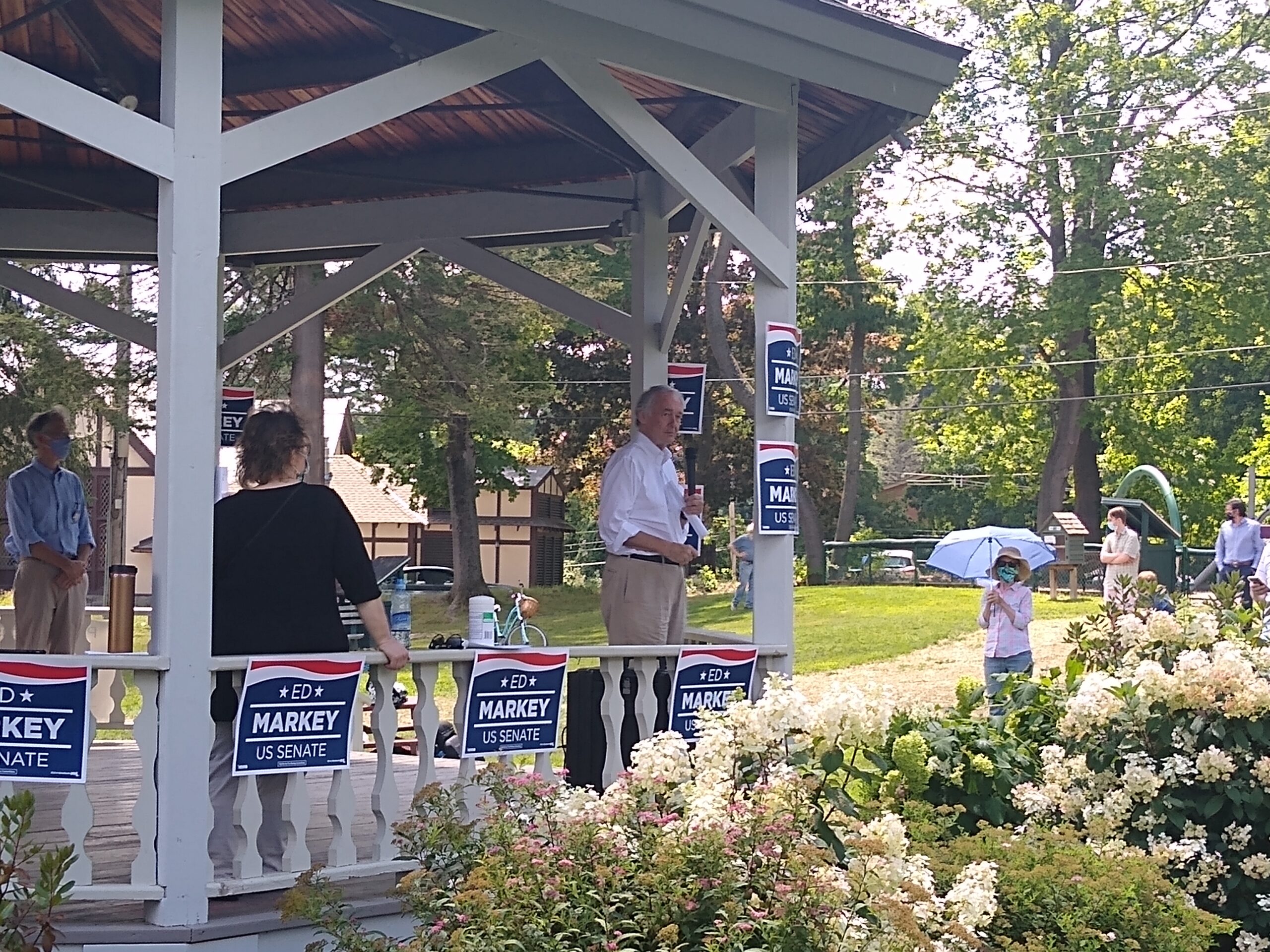 GREAT BARRINGTON—At the threshold of August, Senator Ed Markey rolled into the artsy heart of this Berkshire town, the first of three stops in Massachusetts’s westernmost frontier. He ascended a hill to the town gazebo to address a masked crowd of supporters and celebrate, among his accomplishments, the return of WWLP to local cable.

Throughout this campaign, however, Markey has faced criticism for being absent from the state and for overlooking the deleterious effects a career highlight: telecommunications. This swing out here was part of a larger statewide bus tour touting his accomplishments before the September 1 primary. The Berkshires tour let Markey take on these potential vulnerabilities.

Markey spoke about the region’s connection to history. It advocated LGBTQ rights early, W.E.B. DuBois was born nearby and Shay’s Rebellion had roots in the Berkshires.

“Revolutionaries out here have always been at the forefront of all that change which is absolutely essential to our country,” Markey told the sunbaked crowd.

In Pittsfield and elsewhere, to the extent permissible since the shroud of the coronavirus has fallen, Markey found receptive audiences. 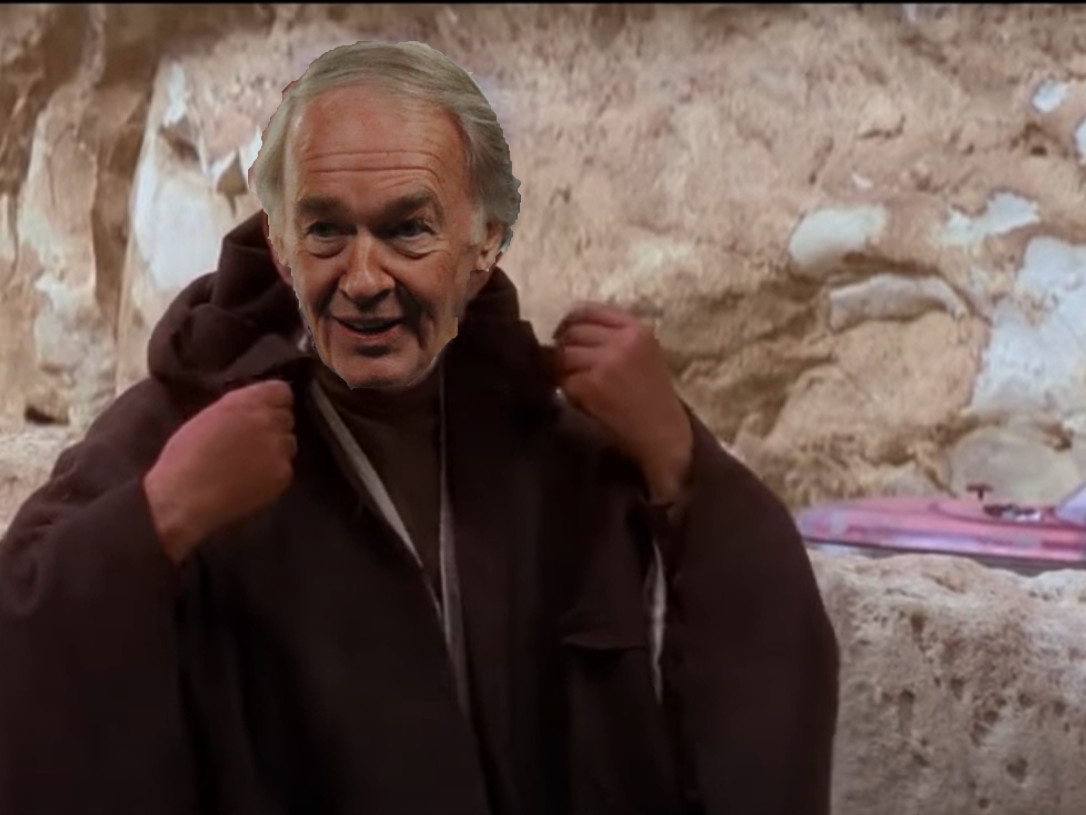 Changing COVID condition has led Markey out of lockdown to confront old foes including allegations of absence. (created via Lucasfilm and Facebook/Markey campaign images)

Still, the Massachusetts Occident presents challenges for Markey, too. His primary opponent, Newton Congressman Joseph Kennedy, III, has deftly appealed to the 413’s gripes about neglect from the East. Outside Hampshire County’s Diploma Belt and artists colonies of Berkshire County, the perception of Markey’s presence has become a campaign issue.

“If there’s a message of this moment, it’s that we need change, right?” Kennedy said in North Adams a few weeks ago as part of his Jobs & Justice Initiative.  That same day at a COVID-compliant Pittsfield restaurant, Kennedy discussed education with District Attorney Andrea Harrington and school committee members.

Markey’s “Leads & Delivers” tour is supposed to address some of this. In stops like those in Berkshire County, he and supporters could quantify his work on behalf of the state, tout the benefits of his legislative activity over the years, and underscore his progressive credentials.

“He was progressive before it was chic,” said Sheffield Selectboard Chair Rene Wood.

Wood also cited Markey’s work to get WWLP back on local cable. Telecommunications legislation has been a defining feature and career achievement for Markey. However, some bills he helped craft such as the Telecom Act of 1996, evoke also evoke complaints.

The day before Markey’s Berkshire stop, a commonwealth away, members of International Brotherhood of Electrical Workers, Local 222 argue outside a Verizon building that Markey had failed them. They predicted the 1996 Act would devastate jobs and claimed it did not live up to its promises.

Myles Calvey in 2011 (via The Electrical Worker)

“It starts right here at 7 Elm Street”—the Malden Verizon building—”where back in 1996 we had over 600 jobs in this building. Today, as we stand here, we have a grand total of 11,” said Local 2222’s business manager Myles Calvey according to a release.

While this presser happened in Markey’s hometown, landline telephonic employment has plummeted across Massachusetts. At one time, the various permutations of the phone company employed scores of technicians and office workers in every city in Western Massachusetts from Springfield to Pittsfield.

Virtually all IBEW locals in the state, including those that represent telephone workers, have endorsed Kennedy and their complaints have surfaced before. Yet, the release indicates the Malden press conference was provoked by Markey’s tour.

The Markey campaign did not dispute the impact on legacy communication jobs. However, it argues the Baby Bells‘ monopolies hurt consumers and the Telecom Act of 1996 midwifed the digital economy.

“Senator Ed Markey had the vision to imagine a new internet economy, the guts to take on the big telephone monopolies, and the unique legislative skill to unite Democrats and Republicans around groundbreaking competition laws that have become the foundation for the internet revolution,” Pickering, a former GOP congressman from Mississippi said.

The campaign pointed to a cornucopia of bills and actions he had taken to broaden Internet access and competition. Speakers in Great Barrington assured of Markey’s commitment to bringing broadband access to the Berkshires’ under-webbed towns.  In a statement the campaign provided, Karen Strauss, a former deputy chief of the Federal Communication Commission’s consumer bureau, praised Markey’s work to improve accessibility in communications.

“Without these tools, such individuals would have been denied opportunities for equal access in their jobs, education, travel, civic affairs and the marketplace,” she said. 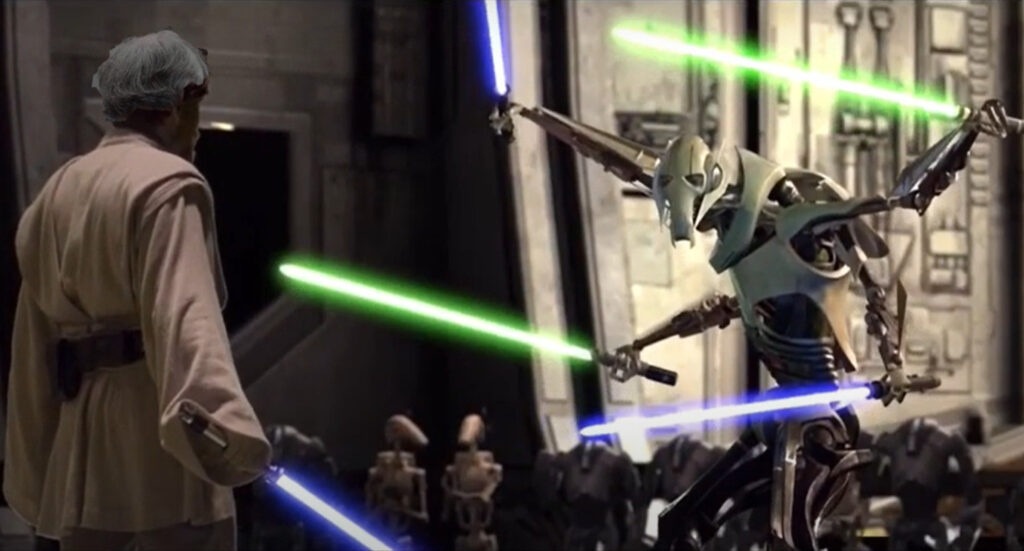 Perception may be a particularly trying foe for Markey. (via Lucasfilm & Markey campaign images)

“My goal working with channel 22, and with Charter Communications was to create a link which ensured that the Berkshire is able to see Massachusetts news,” he said.

Earlier this year, Markey and the region’s congressman, Richard Neal, announced that Charter Communications had agreed to begin carrying WWLP, an NBC affiliate, after a nearly three-year blackout.

Shadowing Markey in the Berkshires was another form of communication, however. A sound truck lurked the streets of Great Barrington and Pittsfield. It did not exhort residents to reelect Mayors Red Thomas or Goldie Wilson. It demanded Markey’s travel records.

Markey’s visits west have been an undertone ever since the race began. Subtext became text after WCVB reporter Janet Wu challenged Markey to release his travel records.

The senator has defended the work he has done for the entire state.

“I do the work, I work hard in Washington to get the laws passed,” he said in Pittsfield. “The job is to legislate jobs to get it done.”

The question of his presence, both of himself and his office, has become something of a Rorschach test in this race. When the race began last year, Markey’s campaign provided WMP&I with a list of western visits. Kennedy’s campaign later used that same list to imply he was mostly MIA in the 413. 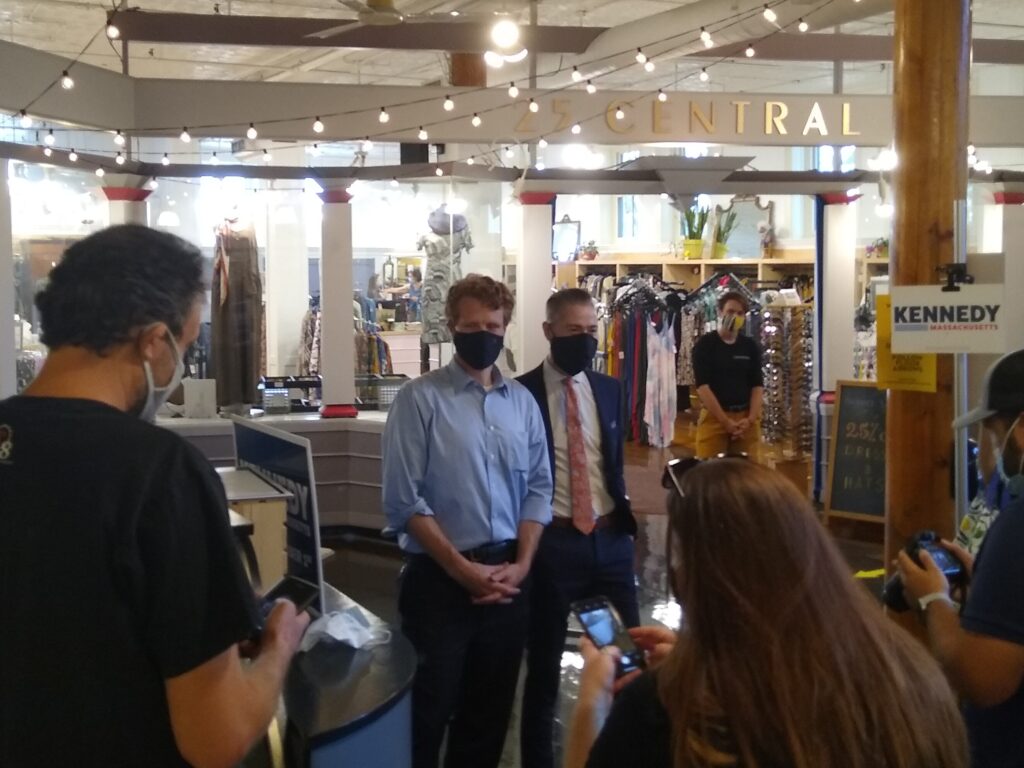 The Masked Kennedy in Thornes Marketplace meeting with merchants. (WMP&I)

Like Markey, freed from COVID lockdown, Kennedy has been sweeping across the 413. In addition to the early July swing of his Jobs & Justice Initiative, he returned this week with hits in Berkshires and the Pioneer Valley. He found receptive audiences in a tour of downtown Northampton and at a rally in Springfield’s heavily Latino North End.

Mathematically, Markey may not need to sweep Western Massachusetts to win, but he is not conceding it to Kennedy, either.

If Markey the senator has suffered from occidental scarcity, Markey the candidate has tried to flip the script. Before COVID-19 arrested virtually all campaign activity, he made multiple visits to rally supporters. During lockdown, he came to Holyoke to support nurses battling the closure of beds at Providence Behavioral Health Center.

Markey made unannounced visits, too. In June, he toured downtown with Greenfield Mayor Roxann Wedegartner.

“I was able to see Greenfield in its earliest stages of recovery,” Markey said then. Though his campaign was staffing him, the visit had an official air. He wanted to learn what leaders and businesses needed from Washington. After a chance encounter with Greenfield Community College President Yves Salomon-Fernández, he realized the important roll community colleges will need to play. They will train healthcare professional desperately needed during the crisis. 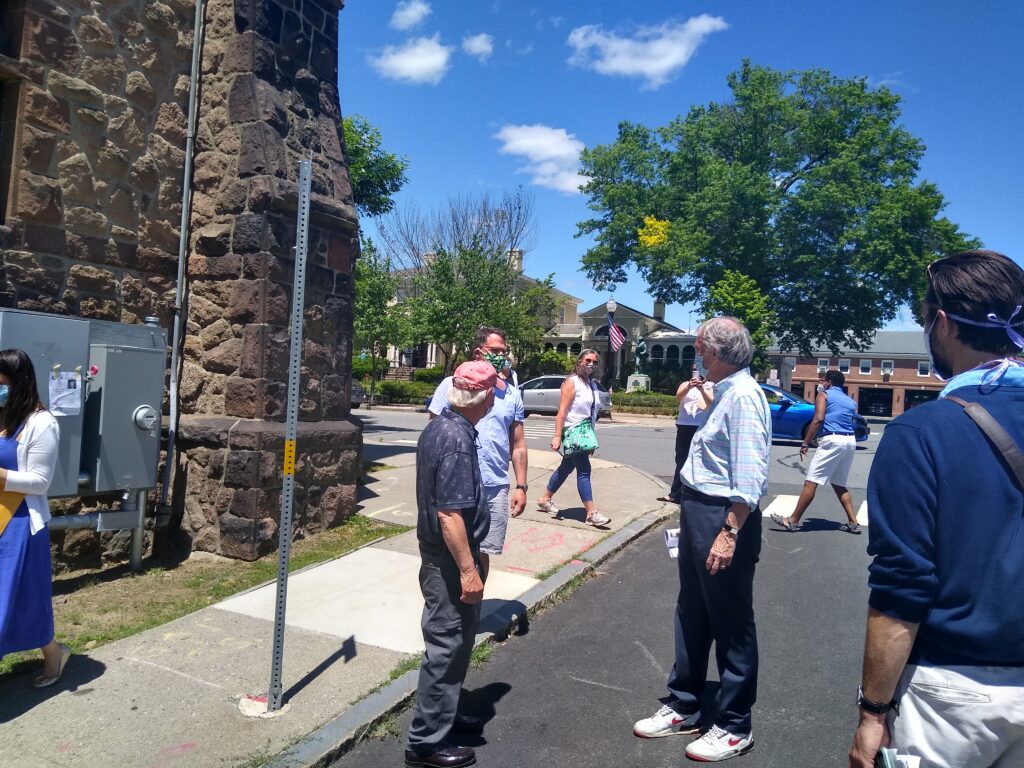 State Rep Tricia Farley-Bouvier praised Markey’s attention to constituent needs. She said his office helped track and retrieve constituents of hers who were abroad when the novel coronavirus seized the planet.

However, for many, this may be too little too late.

Along with DA Harrington, other Berkshires legislators are backing Kennedy. On Monday, Kennedy visited a homeless encampment, a stop some criticized. But in a Kennedy campaign release, Harrington said the visit underscored his commitment to being present.

“I’m proud to stand beside Joe Kennedy because the fact that he’s here right now says everything,” she said.

Whether all the critiques about telecoms or his presence are true or not, ultimately Markey is battling to shape perceptions. A year after this campaign began, do Western Mass voters deem Markey a tourist with an ethernet cable or has he convinced them he is a savvy grind working to transform the region?

Markey may have offered a simpler equation during his Berkshires swing, while evoking his late dairy-delivering father.

“Eddie, you gotta be like a milkman, you gotta deliver every day,” Markey’s father advised.

If voters believe he has, they will deliver him to Washington once more.