In lawsuits, the Council is always a bridesmaid but never a bride, er plaintiff…until now. (WMP&I)

Following the body’s authorization, attorneys for the Springfield City Council initiated against Mayor Domenic Sarno to compel him to implement the Police Commission ordinance. In a 12-page complaint filed in Hampden Superior Court Friday, the Council’s pro bono lawyers, Thomas Lesser and Michael Aleo, lay out the history and law underpinning the ordinance and its disposition.

The complaint frontloads facts, something not every opening shot in Massachusetts lawsuits does. However, this case is not a suit for money. In three counts, the Council seeks declaratory judgment, injunction and mandamus. These claims do not envision the same fact-finding suits for damages entail. Here the plaintiff is simply asking the Court say what the law is and order the parties to follow it.

The mayor, who was sued in his official capacity, has 20 days to answer the complaint. Courts often grants extensions. He has retained Bowditch Dewey, a prominent Worcester law firm, to defend him.

After the Council voted to sue the mayor last Tuesday, Bowditch attorney Michael Angelini, expressed confidence in victory and swiped at councilors. The case, he said, would “be decided in Court, based on the law, without the influence what appear to be short-sighted and politically motivated loud voices.”

Angelini claimed Sarno only wanted “to uphold the rule of law” and to respect the rights and interests of residents and of the charter. Sarno’s attorney also suggested that the commission was bad policy.

In their public statements, Lesser and Aleo have said that public policy is beside the point. The only issue before the court is the Council’s legal right to legislate the police department structure. 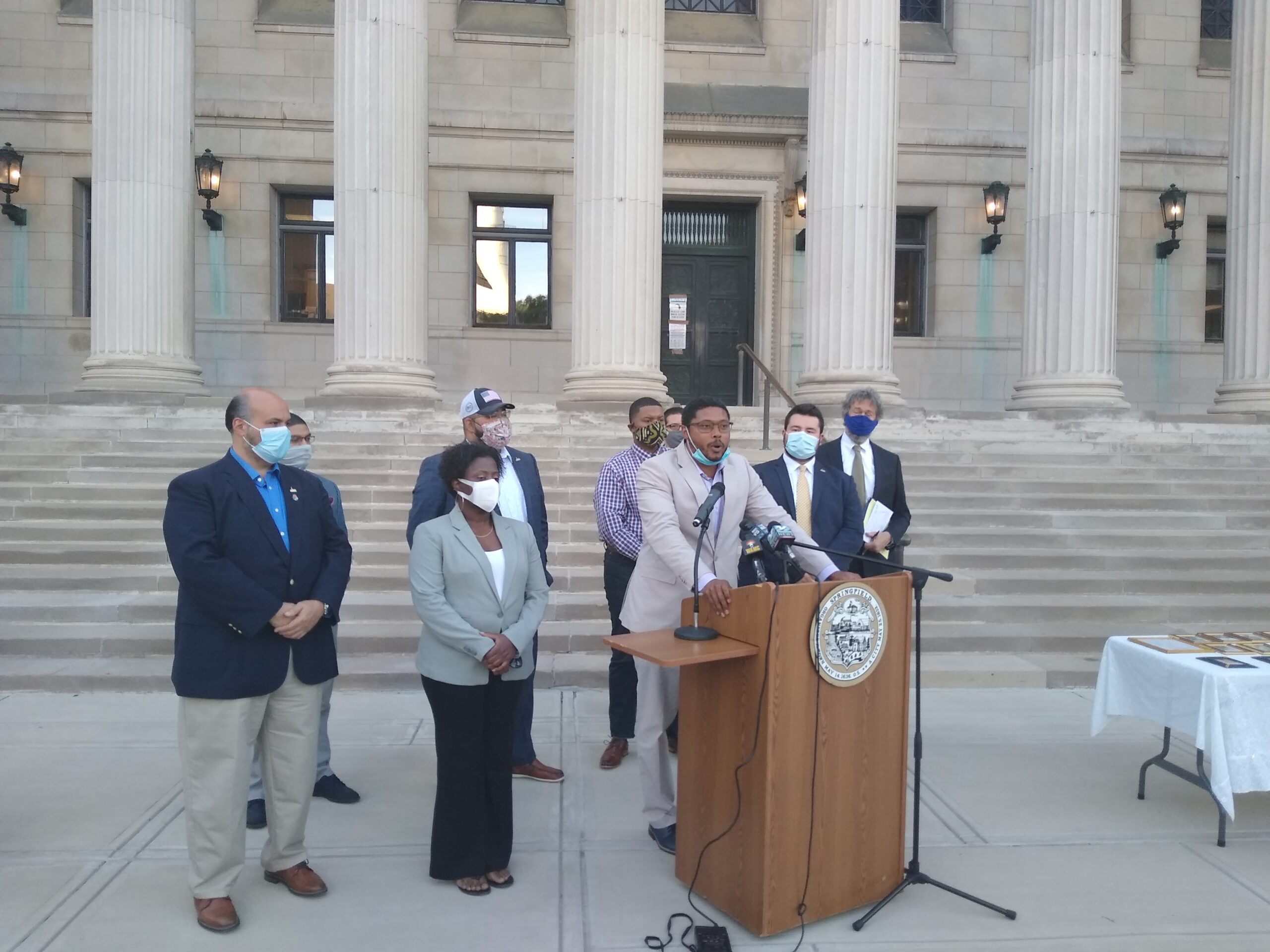 Springfield Council in June: time for a change in venue! (WMP&I)

Among the violations Sarno and City Solicitor Ed Pikula noted then was the requirement that police commissioners on the revived panel receive Council confirmation. The Springfield City Charter explicitly bars such a requirement. The Council’s complaint notes this conflict and councilors’ 2018 revocation of confirmation. Beyond that, substantively, the ordinance did not change in 2018. Sarno still refused to implement it.

Sarno and Pikula still assert only the mayor can appoint Pearl Street’s day-to-day leader. Under the ordinance, a chief would inherent the current sole-commissioner’s day-to-day duties. Management, control and oversight of the department, including the chief, would return to the revived commission, which the mayor would appoint.

Barring some novel argument in Sarno’s answer or an accompanying counterclaim, the court should focus on whether the mayor has a power to appoint the chief that supersedes the Council lawmaking powers. In the complaint, the Council argues it does not. Rather, it notes that the state appeals court has found that mayors have no right to appoint subordinate officials.

While the Council—as a body—never officially lost hope about restoring the Commission, it had few options to force it. As a corporate body, the Council can only enter court with counsel.

State municipal finance law generally bars councils from appropriating funds that lack a mayoral genesis. Prior attempts to secure pro bono Council failed. As the complaint observes, the protests over George Floyd’s death reignited interest and the body was able to secure services of Lesser and Aleo.

Notably, the Council did not file a 10-citizen suit. Such suits are vehicles for the public to sue to enforce laws. Some argue a council must enter court this way, but Boston’s City Council has sued its mayor directly before.

As for the counts, the formal request to determine the ordinance’s validity is declaratory judgment. The other two counts are to force Sarno’s compliance. One is a traditional injunction and the other is mandamus, an ancient legal tool that accomplishes the same thing.

However, courts are often reluctant to issue such relief. They usually presume government officials will follow court rulings. Should that happen here and Sarno ignores a naked finding for declaratory judgment, the Council ask the court to bring the gavel down on the mayor’s head.