Take My Council, Please: In Pursuit of Current & Historic Truths…

SPRINGFIELD—For only the third time since the city adopted the Community Preservation Act (CPA), the City Council here thumbed through and approved the recommendations. Councilors love the program as it lets them approve projects beyond the ambit of mayor. Meanwhile anybody—including some city organs—can suggest projects or apply for funds for parkland, housing or historic uses.

Grinding through the list took time, but such is the cost of a Zoomed Council. However, the dissection of the proposals, mercifully, took place in the Planning & Economic Development Committee (P&ED). The Council contemplated other matters, too, like allocation of excess bond proceeds. These, too, brought debate and ultimately committee referrals.

The Council had several committee reports. P&ED chair Ward 1 Councilor Adam Gomez announced a recommendation for all CPA projects. He added that he and Ward 2 Councilor Michael Fenton would recuse themselves from a $250,000 CPA grant for apartments at the former Elias Brookings School. 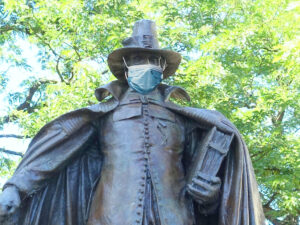 Springfield is starting to think about what jobs will and & won’t come back after the pandemic. (created via wikipedia & google search images)

The Council took up four grants simultaneously to save some time. Among these were mor than $1.7 million funded under federal coronavirus relief legislation, the CARES Act. Chief Development Officer Timothy Sheehan explained his office was looking to assist businesses and begin workforce development planning. Sheehan told councilors the city wanted to prepare workers whose jobs might not return after the pandemic ends.

Among the other grants in this group vote is $210,000 for building resiliency in city infrastructure.

There was considerable debate about how to reallocate unspent funds from bonds. Deputy Chief Administration & Financial Officer Lindsay Hackett told councilors these funds could only finance projects with life-spans similar to the project that was originally bonded.

One of these was renovations at the city’s two golf courses, Franconia & Veterans Memorial. Parks, Recreation & Building Director Patrick Sullivan explained that the city’s golf courses received accolades as staycation destinations during the pandemic. The courses recorded 1200 additional rounds this year.

However, Franconia & Veterans are getting on in years. Being over 90 and 60 years old respectively, they have drainage and irrigation systems in need of renovation. Sullivan’s department wants to use $1 million in unused funds from projects at Brookings and Dryden schools to fund the work.

Some councilors wanted additional review. At-large councilor Tracye Whitfield, the Finance chair, suggested this should go to committee first.  She did not doubt the project’s value, but, Whitfield said the Council should know how these funds were chosen for this particular project.

A view of Franconia, whose irrigation is in need of updates. (via franconiaveteransgolf.com)

The motion to committee passed 12-1 with Fenton in dissent.

The next project, which allocated unspent funds from Brookings, Dryden, Kensington and Kennedy schools, would help finance consolidation of emergency dispatch operations. This became a bit dicier as some councilors wanted more review, but others were sympathetic to expediting the project.

Fire Commissioner B.J. Calvi told councilors that emergency dispatch operations are now bifurcated between the Police and Fire departments. The police side is at Pearl Street while the Fire side is at the alarm center on Roosevelt Avenue. Calvi said the consolidation on Roosevelt would create efficiencies and save money on staff. Among the costs are new computer panels and installation. He hoped to have the work finished early next year.

Ward 8 Councilor Orlando Ramos, while not opposing the project itself, questioned the use of bond proceeds. Ramos repeated a frequent lament about less attention has gone toward accepting private ways, a process that brings them up to higher standard of road. Financial officials countered that bond schools and road have much different useful lives.

Councilor Davila, who is a trained paramedic, agreed with more review and better notice in principle. However, he said better response times and dispatch, especially during the pandemic, had public health and safety implications.

“Being a paramedic, I can see how important it is to have an integrated system,” he said. He noted that the holidays and winter generally are often times when depression skyrockets with all the risks that brings. 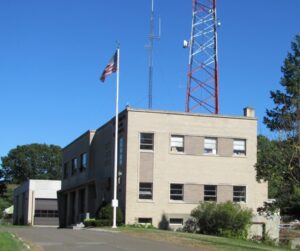 A move to committee failed 5-8 with only councilors Gomez, Ramos, Whitfield, Justin Hurst and Timothy Allen in favor.

While respecting her colleagues’ decision, Whitfield questioned the urgency of the project, noting it had been on the to-do list for years.

“The urgency just came about when we had the bond funds available?” she said.

Neither she nor Ramos, who also reiterated his concerns, too, objected to accepting the order in one vote. The final vote to accept the use of the bond proceeds for the dispatch center was 12-1. Council President Hurst dissented.

Councilors greenlit payment of bills from last year and a redevelopment project on Page Boulevard unanimously. Economic Development staff explained that the latter was a state project, but it affected a technically dormant city agency. The state sought Council approval to keep everything tidy.

The Council however, sent a one-year labor contract with the city’s police supervisor union. Labor Relations/HR Director William Mahoney said the contract would kick off the regular cycle of labor pacts in the city. The supervisors’ contract expired this past June. The pandemic had tabled negotiations, but the union and the city agreed to a one-year pact through next Jun to buy time until COVID-19 fiscal pictures become clearer. The contract includes a 1.5% raise and adds screening for selection of superior officers. It also widens the window to discipline an officer once the city learns of improper conduct.

In chewing over the assessment language, which would apply only to prospective captains, some councilors questioned the need. They worried it might become another hurdle for officers of color.

However, there was also discomfort with new 120-day window to initiate disciplinary procedures, up from 90. Ramos, who chairs the Public Safety Committee, requested review before his panel. He compared the 120 days to the much longer statute of limitations assaults charges have. Mahoney countered that the contract had no bearing on the initiation of criminal proceedings. Moreover, he implied that events like an indictment, not just the act itself, could precipitate disciplinary proceedings, too. Pearl Street is never far from the conversation… (WMP&I)

Ramos invoked the US Department of Justice’s recent report on the Springfield Police to justify the parallel. Gregg Bigda’s name also came up. Mahoney discouraged mentioning him by name lest it jeopardize the city’s posture regarding the infamous narcotics detective. Bigda, who faces federal charges for violating juvenile suspects’ civil rights, escaped termination because of a discipline-initiation technicality. Once the feds indicted him, he was in the disciplinary jackpot once again.

The contract moved to committee on a 12-1 vote. At-large councilor Sean Curran dissented.

The CPA projects received much warmer receptions. Bob McCarroll, the CPC chair, answered councilors’ questions. While there was some banter on each one, councilors were largely enthusiastic. In six-figure territory, aside from the Brookings project, there was another quarter million for Duggan Park, $200,000 for historic homes, $165,000 for the George Walter Vincent Smith Art Museum façade, and over $100,000 each for the Forest Park aquatic gardens, Trinity House in McKnight and a walking path at Marshall Roy Field Park.

Projects that received less than $100,000—from $92,000 to $26,000—were exterior restoration for the Kilroy House off the Quadrangle, a bike and skatepark study, a feasibility study for Indian Orchard water recreation, Thompson Triangle Park’s fountain, invasive plant removal, reuse of a boathouse on the river, restoration of 57 School Street, and a study for the Spanish-American War memorial.

Councilor Ramos feted the water recreation grant, noting the Orchard’s few aquatic options. He noted Lake Lorraine, is actually a state park that the commonwealth shuttered during the last recession. 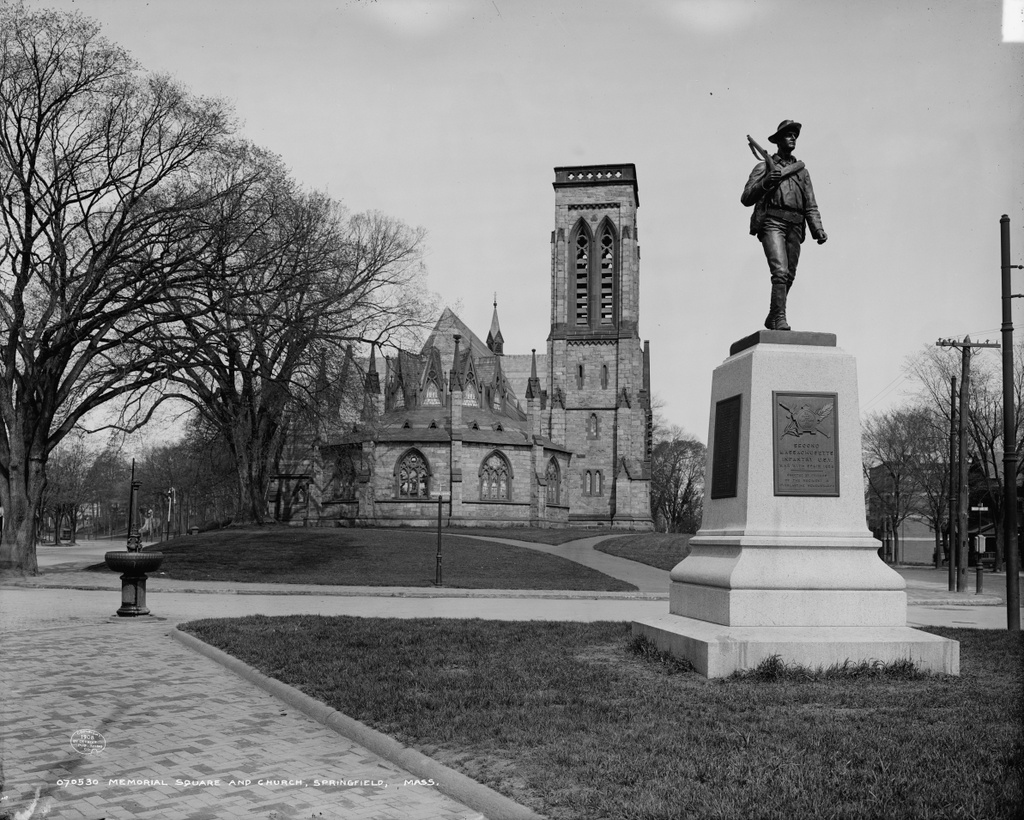 The Spanish-American War Memorial when it was in better shape in 1908. (via Lost New England & Library of Congress)

All items passed without much dissent aside from the Spanish-American War memorial funds. The statue currently stands in the like-named Memorial Square at the intersection of Main and Plainfield. Councilor Davila opined that the city should move it because the memorial commemorates the war, after which, Puerto Rico became a US territory. Put another way it marks when the island became an American colony and sits at the gateway to the city’s principal Puerto Rican neighborhoods.

Other councilors, including Gomez, who represents the area, expressed a desire to reevaluate the statue. Yet, only Davila and President Hurst voted against the appropriation.

The Council’s final actions were last steps on two ordinances. One ended the Science Museum’s exemption to the Quadrangle-Mattoon Street Historic District. All Museum Association buildings have this exemption, but the association sought its repeal to access historic preservation funds.

The other ordinance codified standards for property owners renting Springfield rooms or homes on Airbnb or like services. Its chief sponsor, at-large Councilor Jesse Lederman, did not go into a lot of detail about the bill. The bill had past first step just before the shroud of the coronavirus fell. At that time, he had laid the requirements for safety and parking, many of which had come in response to the concerns of residents.

Not surprisingly, the two items that went to committee Monday night reflect longstanding grumbles in Springfield. There is nothing particularly new about financial decisions coming before the Council as take-it-or-leave-it propositions. Issues with the police department feel like Groundhog Day. However, there is a dance the Council and financial officials sometimes execute to quell such concern even if the administration eventually steps on councilors’ feet again.

The police issue will be trickier. While there was little opposition to further review, it is not clear the contract is the best forum to execute changes US Attorney Andrew Lelling’s office recommended. Ultimately, the fate of the department’s reform seems to rest with the fight the Council has picked with the mayor across the street in Hampden Superior Court.