Take My Council, Please: New & Old Hazards in the Fairway…

It was a virtually brief meeting. (WMP&I/Google images Search)

SPRINGFIELD—On Monday, the City Council dispensed with a financial order left over from the last meeting and passed first step to reform an ordinance that regulates tax breaks in the city. Being the last meeting before an election, the Council also formally set the city’s polling places—none have changed from the September 1 primary—and accepted funds for the upcoming COVID-19 general election.

The virtual meeting grew heated briefly, as it trudged forward with renovations for the city’s two golf courses. To the untrained eye, it can appear silly amid the city’s many capital needs and the pandemic. That said the source of funding could only go to certain projects. Moreover, councilors also said the project led to some accord to involve the Council in the selection of which projects in the future.

Beginning with committee reports, Ward 8 Councilor Orlando Ramos, who chairs Public Safety, described a meeting with Pearl Street brass about the Internal Investigations Unit (IIU). While not the focus of its report on misconduct at Pearl Street, the US Department of Justice was less than complimentary to IIU.

Ramos said he would soon have another hearing on the Police Supervisors contract, which the Council had referred to Ramos’ committee two week ago.

At-large Councilor Tracye Whitfield, the Finance Chair, said her committee recommended passage for all financial orders before the Council Monday.

Among them were the transfer of $1 million in excess bond proceeds from school projects to finance the irrigation and sand trap work at Franconia and Veterans Memorial Golf Courses. 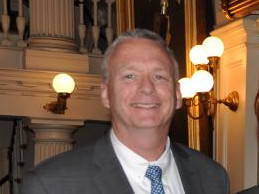 Earlier this month, Park, Recreation & Buildings Director Patrick Sullivan defended the transfer as essential upgrades for facilities that earn the city money. Financial officials, including Deputy Chief Administrative & Financial Officer Lindsay Hackett said that because these were bond proceeds, only projects with similar useful lives qualified for the money.

The proposed work would repair sand traps and dredge silt from irrigation ponds. Brooks that flow into the Connecticut river feed the ponds. Sullivan told councilors the work would shrink water bills. Currently, the city is using the tap to water the greens.

The Council took up the item near the end of the meeting under suspension on a 11-1 vote. Ramos dissented, presaging the debate. Ward 2 Councilor Michael Fenton had dropped of the Zoom call during that vote.

After that vote, Whitfield thanked Sullivan and Hackett for providing additional information. A former Finance staffer herself, Whitfield said they adequately explained the limitations on the bond proceeds. More importantly, city finance officials said they would confer with the Council to identify priorities on the capital projects list.

Sullivan told Ward 5 Councilor Marcus Williams the work should not disrupt play. The city makes money, off tee times. After the shroud of the coronavirus fell, cancelling many travel plans, city golf courses experienced a surge in use once the state cleared their opening.

Ramos argued that the city had other capital needs, “many that are much more urgent,” he argued. Among them were new voting machines—discussed earlier in the meeting—boilers and roofs at schools and work at Van Horn Park. He also noted that the golf courses were a “Priority B” project. Ramos said his colleagues would have to explain to residents why they proceeded with the golf course renovations.

“I respect the fact that this is one of the few revenue-generating departments,” he said, but “It’s still making money.”

However, Sullivan noted that several of the projects Ramos mentioned had other identified funding.  Whitfield restated her support for the project, noting the income the courses provide the city.

“Golf is one of the things that is doing very well in the city of Springfield,” she said. She noted her own concerns two weeks ago, too “When this unexpended bond originally came to the council, I had the same skepticism.”

Whitfield added that golf is not necessarily a luxury, especially in a time of limited socialization. She recalled how, years ago, it became an outlet for her father.

Other councilors defended the vote, too. It passed 12-1 with only Ramos in dissent. He did not object to allowing the order to pass in one reading. Council rules usually require two readings of financial orders. However, as the order had been read at the last meeting, it is not clear that Ramos’ objection could have stopped it.

At the top of the meeting, the Council approved a Columbia Gas petition to up the pressure on the gas line under Gilbert Avenue. City and company officials said the construction of new homes in the area required the upgrade.

In the area of grants, the Council accepted a $185,000 donation from Baystate Health Systems. The money will fund a new phase of renovations at Kenefick Park on Plainfield Street. Another greenlit grant for $120,000 will fund a problem gambling study.

Election Commissioner Gladys Oyola presented a $160,000 grant that would help her office run the election during the pandemic. She said that most of the money would fund the a repeat of plans the city executed during the primary. In fact, it would result in a savings for the Commission.

Ramos asked Oyola about the voting machines and failures he has encountered over the years. For example, sometimes the tape of results, which should be posted after the polls close, is sometimes unavailable. Machines can also malfunction, causing backups.

Oyola noted that the city’s voting machines date to 1995. “It has held out, but what you point out are valid issues,” she said.

However, there other upgrades her office seeks including electronic poll books that polling places use to check voters in. Oyola also assured councilors that her office had adequate personal protective equipment and that any new machines her office would buy would retain the use of paper ballots.

The Council also authorized the city’s polling places, which Oyola said were unchanged from the primary. Early voting is currently underway in the city as well.

Councilors also approved payment of public works bill from last year and sale of two properties. One was an abutting lot. The other was the site of the original Chestnut Street School. After being replaced, the building had been slated for conversion to apartments. However, a fire gutted the structure and the city razed it. Now, the New North Citizens Council (NNCC), neighborhood council with a community outreach arm, has agreed to buy it for $150,000.

The NNCC is planning a $15 million multistory building with community resources including a gym, library, offices and more. Ward 1 Councilor Adam Gomez thanks his colleagues after the vote unanimous vote. He noted that the Memorial Square neighborhood—the official name of the North End east of I-91—has not had a community center like this before.

The only other action taken on Monday was the first step approval of a revision to the city’s tax incremental financing (TIF) ordinance. The ordinance requires the city to negotiate fair labor standards rules into any property tax deals it makes with developers.

Revising and extending remarks on an ordinance. Councilor Ramos in 2016 (WMassP&I)

However, Councilor Ramos, a lead sponsor of the original ordinance, reported that the Law Department does not believe the law’s current language is enforceable. According to him, the ordinance’s reference to the city’s Responsible Employer Ordinance (REO)—which sets women and minority owned quotas for public projects—invalidates the TIF ordinance. Unlike the REO, TIFs refer to private developments.

It took the Council years, but the city has begun more serious Enforcement of the REO. Now the TIF ordinance—and a similar law for housing development (HDIP)—are in the spotlight, especially since some tax breaks have been controversial.

“It is important to have people on the ground to actually count heads,” Ward 3 Councilor Melvin Edwards, who chairs the REO committee, said enforcement of these ordinances.

At-large councilor Jesse Lederman asked whether the bill would affect HDIP tax breaks. Ramos said he would be introducing a separate bill for that ordinance.

Accord and acrimony, minor as it was, made for a bumpy meeting. Still, it was far smoother than some recent meetings, especially after seven months as a virtual Council. But remote or not and pandemic or no, many of the same issues grip the body. Councilors have long complained about short notice on financial orders and Sarno had vetoed the original TIF ordinance (the Council overrode him).

Notably, in this case, the administration is not putting up as much of a fight. Finance officials are promising to work with the Council on a project list. The Law Department is working with councilors to tweak the TIF ordinance into an enforceable law.