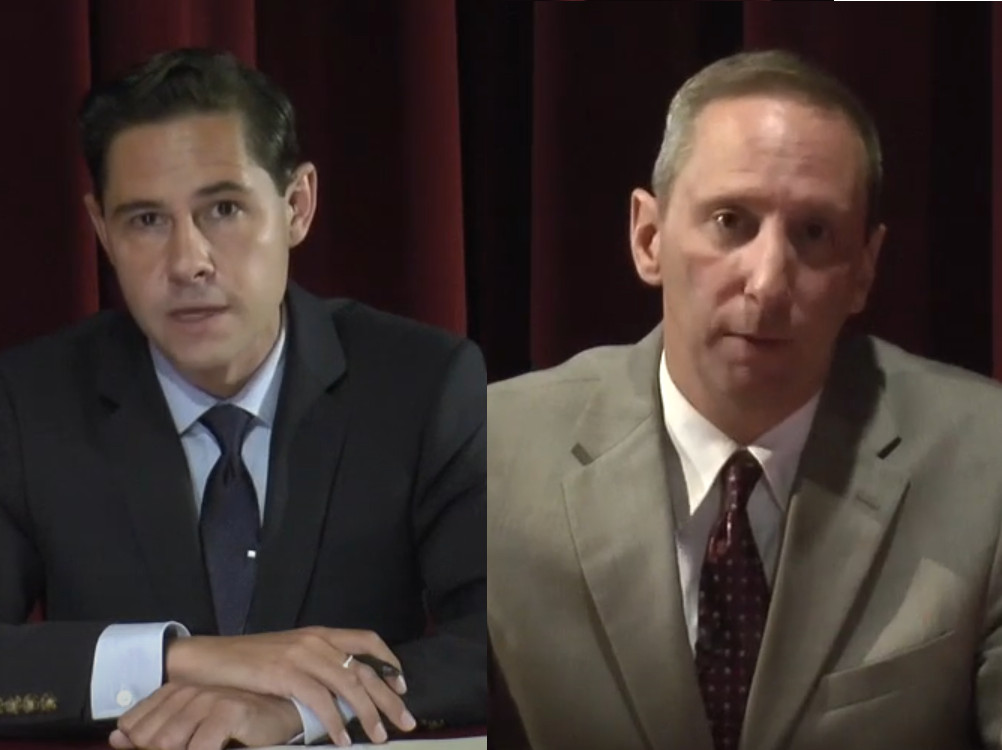 All good races must come to an end. (via Ludlow Community TV stills)

The last outstanding race in Western Massachusetts is over.

James “Chip” Harrington, the Republican nominee for the 7th Hampden House district, ended his campaign Thursday evening following the recount in Belchertown earlier in the day. He had sought the fresh count after the town reported conflicting gaps between himself and Democratic rival Jake Oliveira.

In a video the Ludlow Republican said posted to Facebook, Harrington said the count was arduous, but went well. It did not alter the posture of the race, though. That, in addition to the cost of the recount and COVID concerns, led him to cancel the recounts and congratulate Oliveira.

“In the end when everything was said and done, there was really not much of a change in Belchertown,” he said in the video. “So, for that reason, I have decided to end my campaign for state representative tonight.”

Although less prominent national and state elections, the 7th Hampden race attracted local and state interest. Not only was longtime Democratic rep Thomas Petrolati bailing after 34 years, but both parties saw seat as ready to somersault to Republicans. By comparison, the 4th Hampden, which the GOP did turn over, had had a Republican rep as recently as 2013.

The 7th Hampden district includes Ludlow, three precincts in Belchertown and slices of Chicopee and Springfield near their borders with Ludlow.

Ludlow, historically the anchor of the district, has slipped away from Democrats in recent year. Though President-elect Joe Biden did recovered ground in the presidential election. Countering that shift was leftward movement in Belchertown. Meanwhile the Springfield sections are decidedly Democratic and the Chicopee areas leans right.

But not only geography gave Republicans a chance.

Both Harrington and Oliveira are from Ludlow and serve on the School Committee there. A former Democrat, Harrington, 52, has served on various boards and ran for state Senate twice—once for each party. As a Republican, Harrington has offered a more moderate pitch, hewing closely to Governor Charlie Baker. A SuperPAC with ties to Baker invested in the race.

Oliveira, 34, too, is a fixture in Ludlow, but not for as long as Harrington. Between the personal ties and shifting political sands, Harrington was probably his party’s best shot to take the seat in an environment that otherwise heavily favored Democrats.

However, it was not enough. Oliveira romped in Springfield and held Harrington’s leads down in Chicopee and Ludlow. Belchertown became the denouement. Its three precincts in the district, collectively, went to Oliveira.

Indeed, Harrington cited partisanship and how the COVID-19 outbreak had warped as part of the campaign as factors in his loss. These, he said, inhibited his ability to introduce himself voters properly.

Uncommon events in Belchertown lead to common result. (via wikipedia)

The recount itself grew out of clerical errors in Belchertown. While both Harrington and Oliveira initially though the latter had won—both had gathered numbers when polls closed—the Belchertown clerk accidentally gave the Associated Press numbers that inflated Harrington’s overall total. It was corrected the next day, but Harrington cited that error and others on the clerk’s part to justify a recount.

“There’s nothing more important that a city or town clerk does than run an election,” Harrington said in his video.

But little changed in the recount. While there were some variations among the three precincts, Oliveira actually netted an additional vote. That left Oliveira roughly 163 votes ahead, sources say, far too many for Harrington to overcome with recounts in Chicopee & Ludlow. (The Associated Press still reports a 135-vote Oliveira lead). He conceded to Oliveira in person.

Oliveira had not commented as of posting time.

Unlike some Republicans, Harrington accepted the results and said they were a sign that Democracy was strong in the 413. He thanked his supporters and volunteers, including those who participated in the laborious recount.

Still, he lamented that it did work out. Harrington said he had hoped to continue his service in Boston, but would remain on the School Committee. He was philosophical about where his political career would go from here.

“It’s something I always wanted to do,” he said. “I guess the universe has a different plan for me and I’ll go find out what that is.”