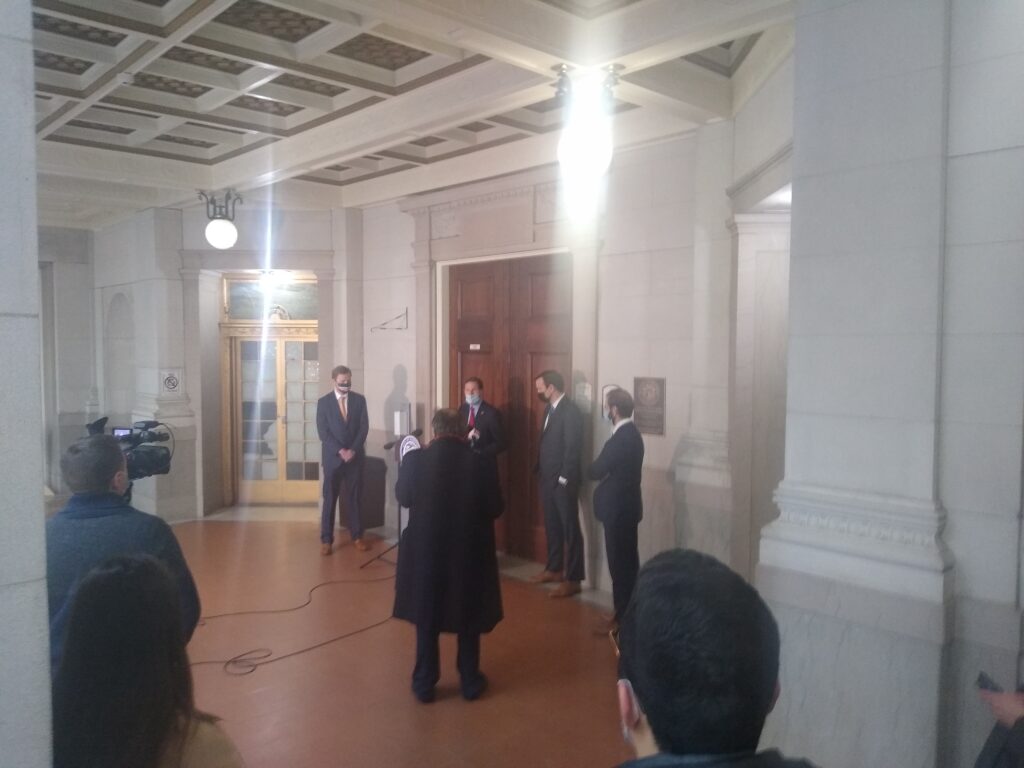 HARTFORD—Connecticut was among the first places that took COVID-19 in the gut last spring. The fears of variants haunt everyone here as well. However, the state has become a model for coronavirus response, becoming a leader in testing and vaccination. However, like countless other places the pandemic has laid waste of state and local budgets, underpinning President Joe Biden call for aid.

Compared to last month, when Republicans blocked such monies, Democrats probably have the votes to force through funding. Still, Connecticut’s Senators Richard Blumenthal and Chris Murphy came to City Hall here on Friday to make the case for direct state and local relief. Connecticut Speaker of the House Matthew Ritter and the mayor here, Luke Bronin, flanked them to boost the pitch.

Biden’s $1.9 trillion proposal includes $350 billion for state and local governments. A funding formula would distribute it to states. Cities Hartford or Springfield’s size might receive some funding directly, but smaller cities would received funds as pass-throughs from the state.

In part because it has held off the virus’ resurgence and stayed relatively open, Connecticut is not in as bad of shape as some states fiscally. Officials here released no figures, but Bronin pointed to longer-term risks like commercial property values. The pandemic could undermine the office market for years. Like Springfield, its twin city upriver & across the border, Hartford has suffered years of property value decline that had seemed to crest before the pandemic.

Because cities like Hartford and Springfield receive the lion’s share of their own revenue—as opposed to direct states assistance—from property taxes, the pandemic has not interrupted their revenue streams as directly.

For example, Springfield has recorded about a $7.5 million deficit in its current fiscal year that began July 1. Of that, less than $3 million is due to lost revenue. Springfield’s budget is in excess of $700 million. However, last year Springfield budget officials warned the current course was not sustainable without federal help.

However, Bronin and Ritter both noted the expenses state and local governments have undertaken since the pandemic began. Ritter, whose House district is anchored in Hartford, pushed back on Republican claims that states and localities would pay down debt or long-term liabilities.

Murphy suggested that schools in may need to invest considerably over the summer to reacclimate students or catch them up to speed before much more normal schooling could begin in the fall. Senator Blumenthal noted that the impact fell largely on the students of color in more distressed communities like Hartford. 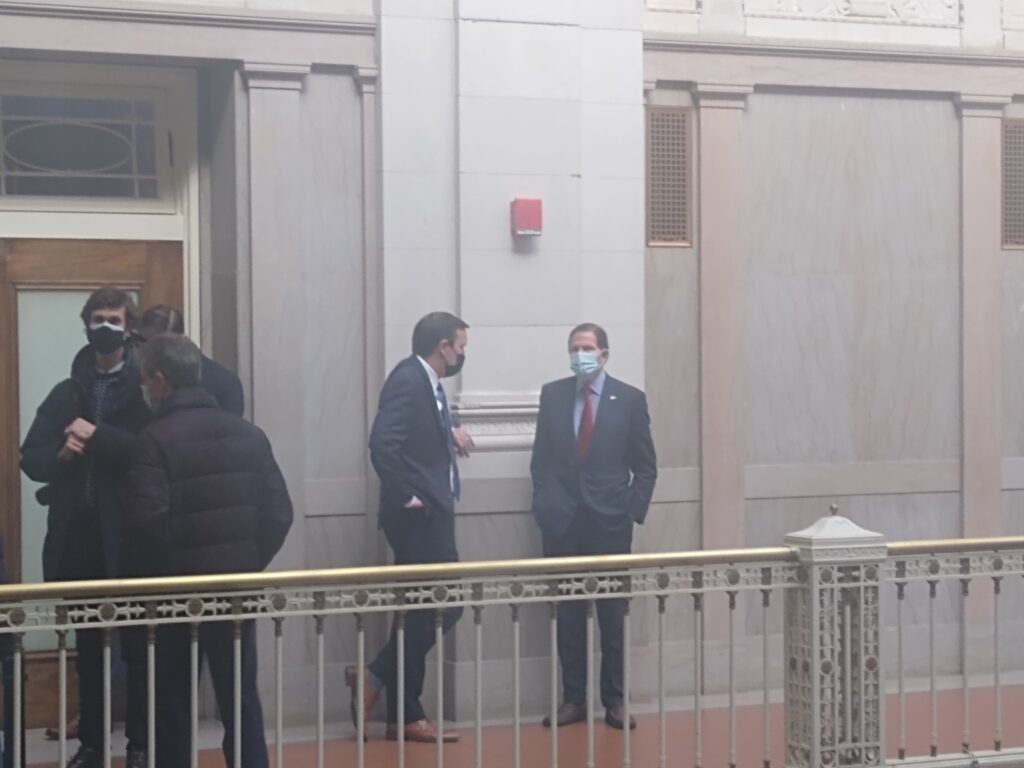 Chris and Dick take a break to caucus.(WMP&I)

Democrats in Washington have advocated for help to state and local government since the House passed what was to be the second major COVID response bill—two preceding ones were just refunding the original CARES Act. At that time, the full impact of the pandemic was not yet clear.

Since then, the United States has emerged somewhat better than elsewhere in the West. States are no different. With the job losses borne disproportionately at the lower end of tax brackets and Wall Street flying high—if pre-Gamestop—state coffers have recovered more than expected. However, many gaps remain and the uncertain reigns over budgets.

Connecticut might record a surplus this year, but Massachusetts plugged its very late budge with savings. However, this does not account for a long tail of COVID-related costs that Ritter noted. Both states project big deficits come next fiscal year. The schism between New England’s first and second largest states also illustrates a broader problem nationwide. Some states are hurting considerably more due to the depth of the pandemic. Restrictions put in place to constrain it have often magnified the impact.

Murphy said more state and local jobs had already been lost than in the entirety of the Great Recession. In addition to diminishing services, such job losses can weigh down the economy. That in turn can undermine recovery once vaccinations are underway and widespread.

Should Republicans decline to come on board, Blumenthal and Murphy, reasonably, had clear consciences about using reconciliation to enact relief. Reconciliation is a budgetary tactic that allows the Senate to pass appropriation legislation without concern for a filibuster. Republicans have condemned talk of using the tactic as partisan.

At City Hall, Blumenthal wryly noted that the GOP used reconciliation to pass gargantuan tax cuts in 2017. The legislation largely benefited corporations and the wealthy.

In an interview with HuffPost earlier this week, Murphy offered a more succinct reply to Republican bellyaching on reconciliation.

“Cry me a river,” he told the online news site.