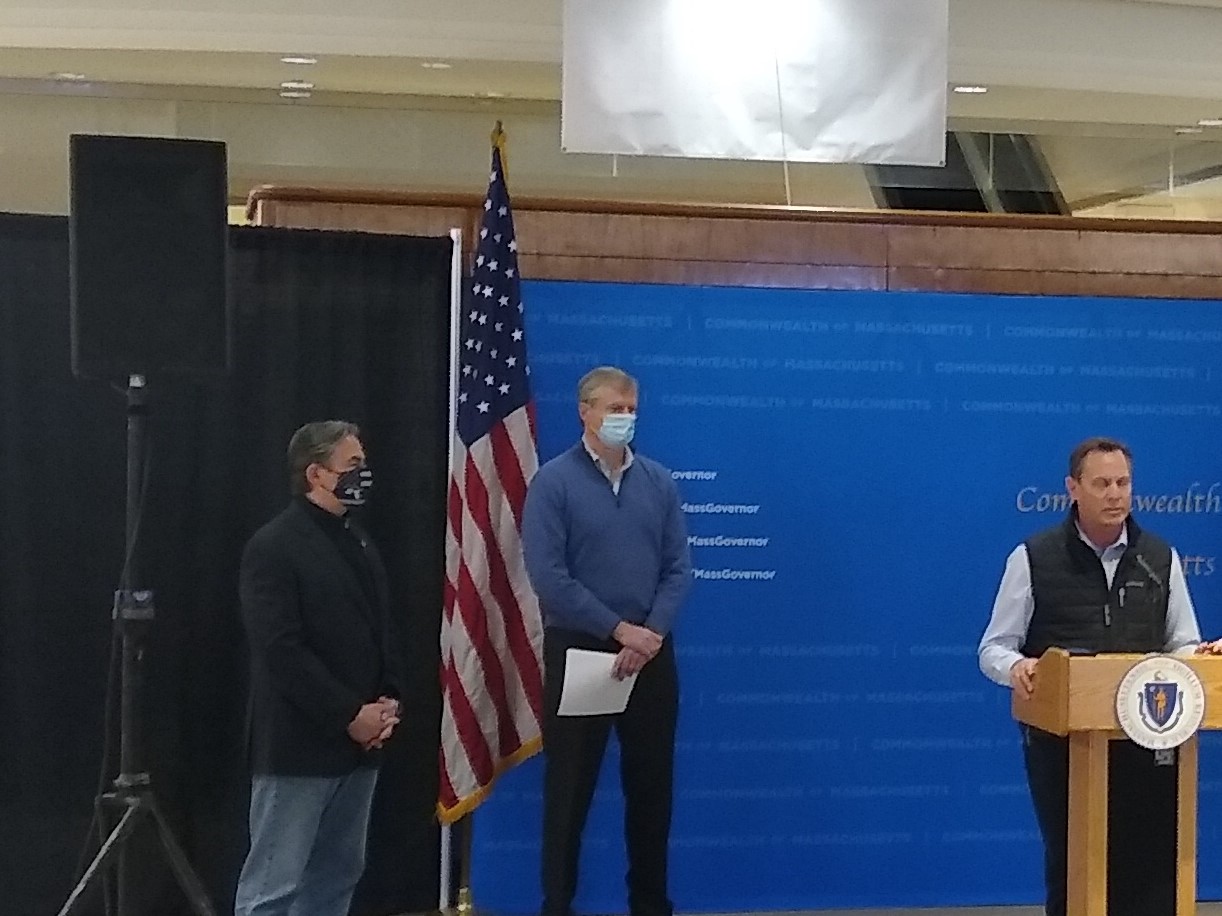 The Magic of a former Macy’s? Gov. Baker trying to blend in at the Springfield mass vax site on Saturday (WMP&I)

SPRINGFIELD—At the start of last week, the mass vaccination site here was a mess. Confusion and a breakdown in communications led to a dangerous situation. Elderly vaccine-seekers were waiting in the cold outside the husk of the former Macy’s. As complaints about the vaccine rollout grew desperate—legislators had already sponsored legislation to force changes—the visual of a tide of blue-haired masses at Eastfield was poised to become a symbol of the commonwealth’s failure.

When Governor Charlie Baker visited the site on Saturday, the situation had improved. The jabbed-to-be were waiting in their cars. What lines that persist have moved inside. Things have improved mightily from the days when Connecticut was eating the commonwealth’s lunch on vaccine distribution. Yet, the situation remains chaotic. The allocation of doses away remains opaque, the rules are confusing, some population appear overlooked and increasingly officials on all levels are losing patience.

Last week, the commonwealth advised hospitals they would be receiving fewer first doses. Many, if not most stopped scheduling first shot for the time being. Meanwhile, what vaccinations site remain—or are growing—are not necessarily in places in the Pioneer Valley with the most need.

At his press conference Saturday, Baker did not dispute reporting that hospitals’ vaccine allocation was changing. However, he insisted that they were still receiving a substantial amount of the state’s supply.

“No what I’m saying is they are still getting the largest share of any group in Massachusetts,” he said.

Hospitals, their health systems and community health centers, he continued, “are going to be getting half of all vaccine that is going to be distributed next week.”

Baker said the state’s capacity to vaccinate still vastly outstrips the supply of vaccine Massachusetts receives. This is largely true and mirrors problems other states have had. However, nobody is arguing that Baker is hoarding vaccine, but rather questioning his administration’s decisions about where it should go and how. 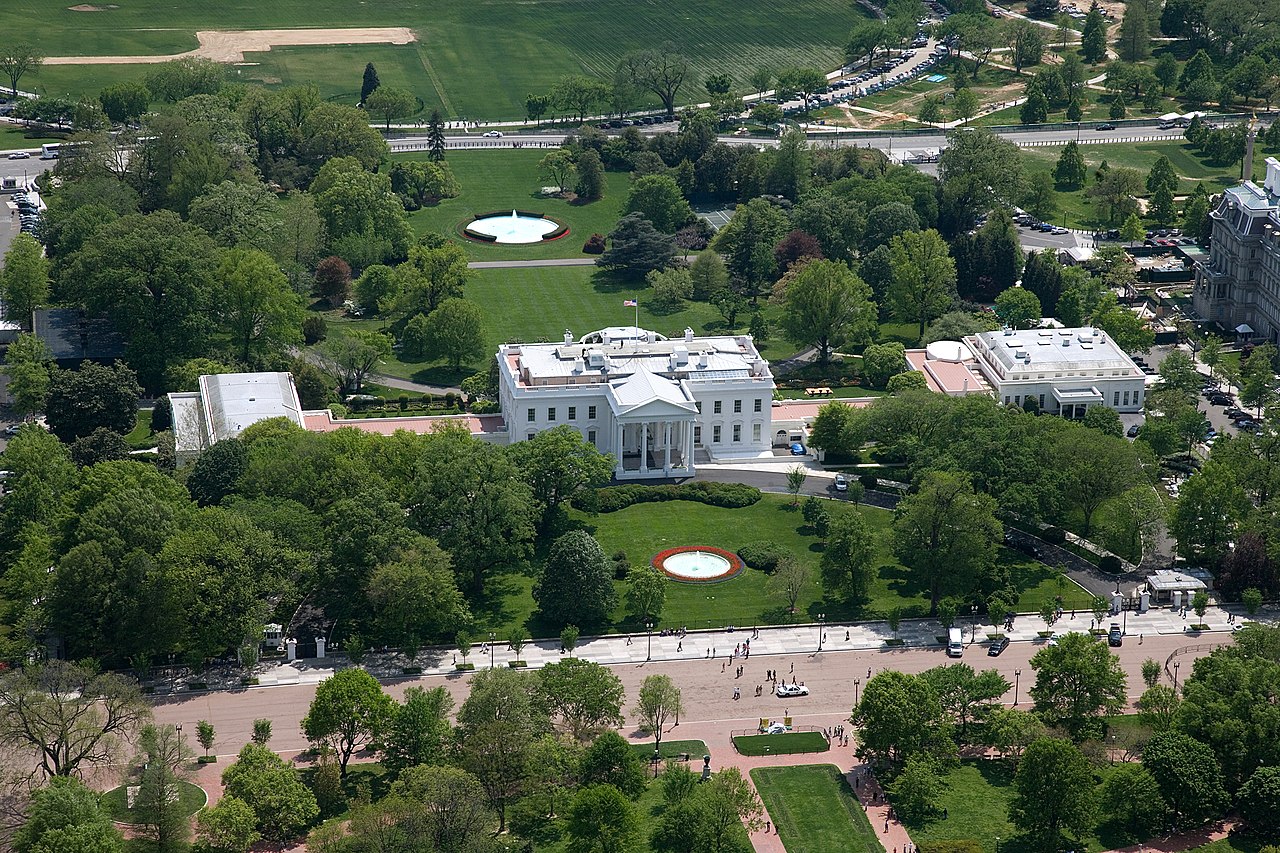 Contingent on availability from the vaccine makers, the White House and its COVID operations control vaccine supply. (via wikipedia)

Some decisions may be outside the state’s control. The White House announced an increase in vaccine allocation to federally recognized community health centers on Tuesday. However, states were free to allocate vaccine to these institutions before now.

In Western Mass, concerns are particularly acute. Only one mass vaccination site serves all of the 413. Aside from Eastfield, the state’s vaccine-finder website also lists the 16 Acres CVS and the Big Y at Five Town Plaza. While in the city limits, both are about as far away from the hardest-hit city neighborhoods as possible.

On Saturday, when asked about the accessibility of Eastfield to the city’s more vulnerable population—only a few bus routes still serve the mall—he pointed to vaccine allocations to community health centers. However, the state vaccine site shows none in Springfield. A fourth Springfield location is Mercy Medical Center, which like other health system took a hit in the reallocation.

The governor’s office did not return a request for clarification about the community health centers as of posting time.

Springfield is not the only city with large at-risk populations where access to vaccine appears tight.

The state’s website only shows two location in Holyoke—a CVS near Holyoke Mall and Baystate’s facility there. However, according to Holyoke Mayor Alex Morse, there is a third option: Holyoke Health Center.

Still, Morse had concerns about how the rollout was going.

“I do not think the current delivery model is ideal, particularly among at risk communities,” he wrote in an email. “We should be prioritizing offering vaccines at places where residents already have built trust and familiarity – their PCP, local health clinic, etc.” 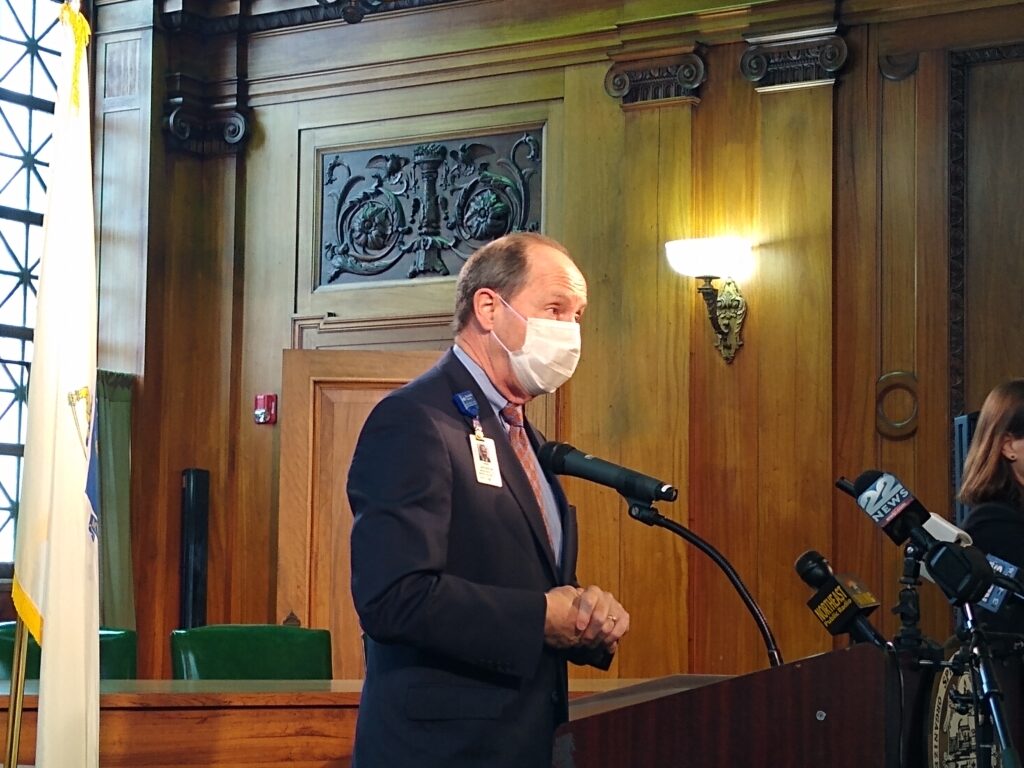 “Our allocations have been flat even though we think we could triple or quadruple our capacity,” he said.

In previous weeks, Keroack had said Baystate plans to contact its eligible patients. Such vaccinations could take place at its satellite health facilities in communities. Baystate should be able to perform previously scheduled first doses and second doses. New appointments are another matter.

The Massachusetts Hospital Association did not comment on Baker’s remarks. However, a spokesperson referred to an item in its Monday report about reallocations from hospital systems and to mass vax sites, pharmacies and community health centers. The MHA’s item noted hospitals’ challenges in the pandemic even as they administered 450,000 vaccine doses.

Massachusetts hospitals “have also stood up vaccination sites in more than 20 locations as a part of this effort, many of which are in hard-hit communities and designed to engage underrepresented residents,” the item reads. “Hospitals have shown to be in a prime position to help steer a rollout that is safe, equitable, and efficient, and MHA will continue to work closely with the state as the supply from the federal government improves.”

Baker has been facing growing criticism for the rollout. As The Boston Globe observed Tuesday, His Excellency faces incoming from the congressional delegation, the leaders of the state House and Senate, and a deluge of legislators.

Nearly the entire Massachusetts federal delegation sent Baker an extraordinary letter calling out the errors that have bedeviled Massachusetts’s vaccine rollout despite its legendary medical and technical resources. They called the process so far “disjointed and cumbersome,” and urged the creation of a centralized pre-registration system.

Fueling this increasing criticism is outrage from constituents. State legislative offices saw a deluge of complaints and frustration when the website first went live. Constituents said it was inaccessible for both practically and technically, and even the technologically-savvy found it byzantine. 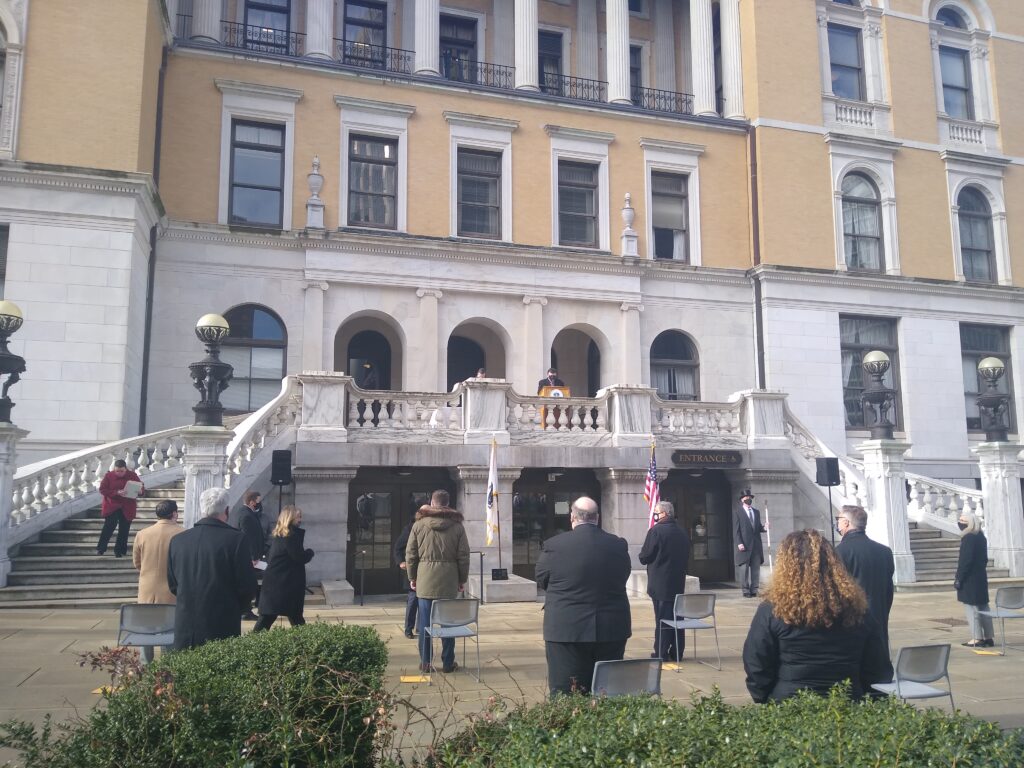 With a call center now open to assist residents, the situation has stabilized. Still, offices are hearing about inaccessibility to vaccination sites and the insufficient allocation of doses to the 413. Offices are also fielding complaints about the awarding of contracts to administer vaccines when local boards of health have experience with operating vaccination clinics.

Speaking at Eastfield days before Baker’s visit, Longmeadow Senator Eric Lesser agreed that local health department that know the neighborhoods should be getting vaccine supply.

Baker had said Saturday that as of that day, Berkshire, Franklin & Hampshire counties had met or exceeded the state vaccination rates. However, Hampden County, the 413’s most urban area was lagging the statewide average. Though there plans to target at-risk populations for vaccination.

The office of Attorney General Maura Healey has warned seniors of scams.

Others—check in on the seniors in your life. Make sure they have a plan to get vaccinated. Booking an appointment & getting to a vaccine site can be a challenge for our older residents.

Do NOT use the caregiver system to jump the line. Vulnerable people need this vaccine first.

“I am thankful that the Health Center has been able to alleviate this concern to some extent, but supply is the biggest issue right now,” Mayor Morse said. “I am hoping that community based health centers will become a priority for the state when it comes to allocating doses. Only mass vaccination sites are allowing those who accompany 75+ to also get vaccinate.”

Indeed, on Tuesday, Dr. Keroack warned Baystate patients receiving the vaccine could not bring a buddy to inoculate.

This all speaks to the confusion federal officials described in their letter.

“We remain deeply concerned that the absence of a centralized pre-registration system for vaccine appointments has contributed to a slow and inequitable deployment of vaccines in Massachusetts, a trend that will only be exacerbated by increased demand as appointments open up to future eligibility groups,” reps and senators wrote. 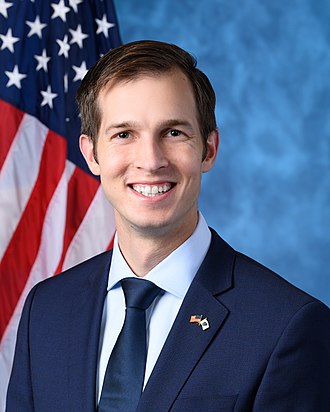 The office of Newton Congressman Jake Auchincloss, who had signed the letter, received complaints not unlike those facing his state counterparts.

“The bulk of the outreach to our office has concerned the availability of appointments and our casework team has been hard at work helping constituents navigate the process,” said Matt Corridoni, an Auchnicloss spokesperson.

Baker has sloughed off the complaints, saying federal electeds should tell the White House to make supply more reliable.

He has repeated criticism that notice of supply is only a week or so out. This is not entirely true. The White House has promised three-weeks advance notice of supply and Connecticut has confirmed this has been happening. Though, Massachusetts is not alone in demanding more certainty.

Baker’s office did not respond to a request for clarification on this point. Yet, on Wednesday he acknowledged these assurances from the Biden administration. He described it as a promise states would not receive any less in a three-week window. However, it may not account for sudden increases.

The governor implied a nearly 25% increase in weekly doses the feds announced the day before spurred the state to expand eligibility to those 65 and older and those with comorbidities. Even so, he continued to blame uncertainty from the feds according to Boston.com.

The Globe also noted that the buddy system will not apply to the newly eligible.

While things have improved, one group has had enough. Also on Wednesday, the chairs of the legislature’s new COVID-19 Response Committee, one of whom is Northampton Senator Jo Comerford, announced the panel’s first oversight hearing on the vaccine situation.