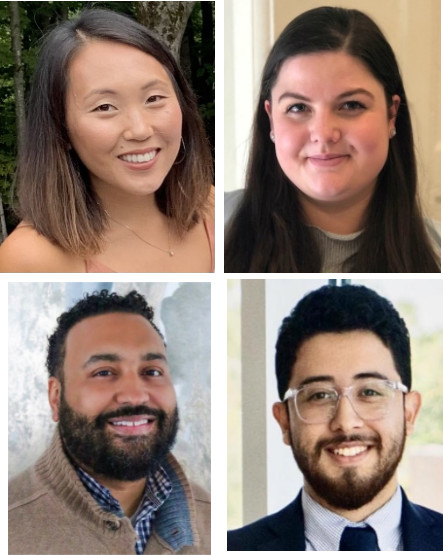 About a month after taking office, State Senator Adam Gomez, the newest member of the upper house of the Massachusetts legislature has unveiled his office staff. Last week in a press release, Gomez laid out his four-person team split evenly between the State House and his Hampden Senate District.

The Springfield Democrat has assembled a diverse staff for his Boston and district offices with experience at both ends of the state. In the House, rank and file reps have only one staffer. Senators have a payroll large enough to build out a staff as they wish. While formal titles used by the legislators human resources office veer into the banal, this freedom allows senators to customize positions that cater to the demands and interests of individuals Senate offices.

For his chief of staff, Gomez hired Danielle Allard who will also serve as his general counsel. Allard came from Pittsfield Senator Adam Hinds’s office where she also served as general counsel as well as policy and budget director.

Chiefs of staff are usually senators top aides and it is not uncommon for them to also serve as the in-office lawyer. For example, Longmeadow Senator Eric Lesser’s chief of staff, Stephanie Swanson, also serves as his office’s general counsel. However, chiefs of staff also have the responsibility of formally managing the full staff. They may also lead the interface with whatever committee staff a senate chair has.

Gomez’s legislative director is Lauren Matteodo. Unlike Allard, Matteodo’s background is principally in the House. Among her posts, according to Gomez’s release was the House Ways & Means Committee when now-retired Rep Steven Kulik was its chair. Legislative directors follow the senate office’s bills and priorities as they move through the legislature.

Not uncommon for outstate senators, Gomez has opted to staff his district office with two aides. His district director Anthony Moore came to the office from Springfield’s Office of Planning & Economic Development. Per the release, Moore’s focus there was project and business management and development.

Gomez’s final announced staffer is Ali Reza-Reyes, a recent college graduate. A one-time intern for New York Senator Kirsten Gillibrand, Reza-Reyes is described as fluent in Spanish with an advanced proficiency in Russian. Both languages are spoken widely in the Hampden Senate district. 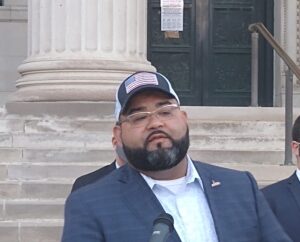 Senator Gomez in June before his election and while still a Springfield city councilor. (WMP&I)

Notably, Gomez also announced that his office would be at 32-34 Hampden Street. This was also where Gomez’s predecessor James Welch had his office. Located next to the studios WGBY studios of New England Public Media, the building is centrally located. Plus, its owner, the New England Farmworkers Council, has had good relations with both men.

For the most part, Gomez’s staff setup mirrors those of other senators. While he has not assigned an explicit communications director, though Allard and Matteodo will fill those roles jointly. Northampton Senator Jo Comerford does not have an explicit comms staff either, but plenty of other offices, like Lesser’s do. Some do not have counsel admitted to the bar, either.

It all depends on what the senator wants and needs in staff.