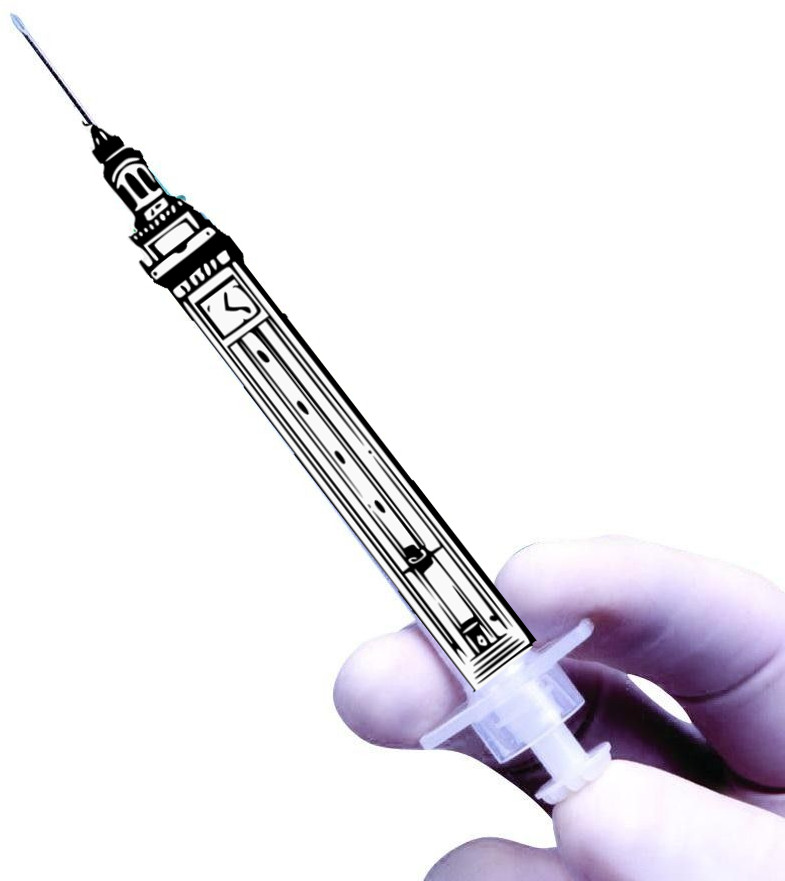 Vaccination should begin at (the City of) Home(s). (via google image search & official city iconography)

SPRINGFIELD—Despite its world-class healthcare assets, Massachusetts had been milling around the bottom of vaccine distribution in the United States. That has begun to change as Governor Charlie Baker loosened criteria to inoculate an individual. Still, access is spotty, particularly in Western Massachusetts, and the mass vaccination site here has already had a short, harrowing history.

The prime limiting factor is supply of the vaccine. Pfizer and Moderna, the makers of the only two vaccines US has approved, have ramped up production, but full delivery will take time. Johnson & Johnson’s one-shot jab could get the greenlight this month, too. Still, Massachusetts’s emphasis on large-scale vaccination sites may overlook smaller venues that local health departments, like Springfield’s, could operate and which could reach more at-risk populations.

Following national trends, Springfield’s cases of the novel coronavirus, have declined. Though the city and Hampden County have seen shallower drops than Massachusetts overall the situation has improved.

Nonetheless, the pandemic can only truly end upon wide availability of vaccines for COVID-19, the disease the coronavirus causes. Local hospitals have supply—Baystate Health will be contacting its eligible patients to make appointments—but beyond that, access does not seem as broad as is increasingly found out East.

Mayor Domenic Sarno and Health & Human Services Commissioner Helen Caulton-Harris have all but pleaded for vaccine for local health departments. So far, the city has only one vaccination clinic at Boland School. However, it has only had enough to inoculate public safety workers.

That is especially frustrating as the city could stand up as many as 10 neighborhood vaccination centers across Springfield. Months ago, Caulton-Harris told reporters that citywide  vaccination plans—which long predate COVID-19—could be mobilized to deliver shots directly to Springfield residents. The principal limitation would be supply.

The Facilities Department, she said on Monday, “has given us a list of 8-10 venues where we can stand up vaccination sites.”

Her office has reviewed the sites for parking and ventilation. The city plans to work with AMR, an ambulance company, and has reached out to potential volunteers, such as pharmacy students, to help staff sites.

“We are ready to go,” Caulton-Harris added. The city could open sites in 7-10 days, she explained—were supply at the ready.

“There should be a vaccination clinic accessible to every neighborhood in Springfield,” at-large Councilor Jesse Lederman said in a statement. Lederman chairs the City Council’s COVID-19 Response Committee. 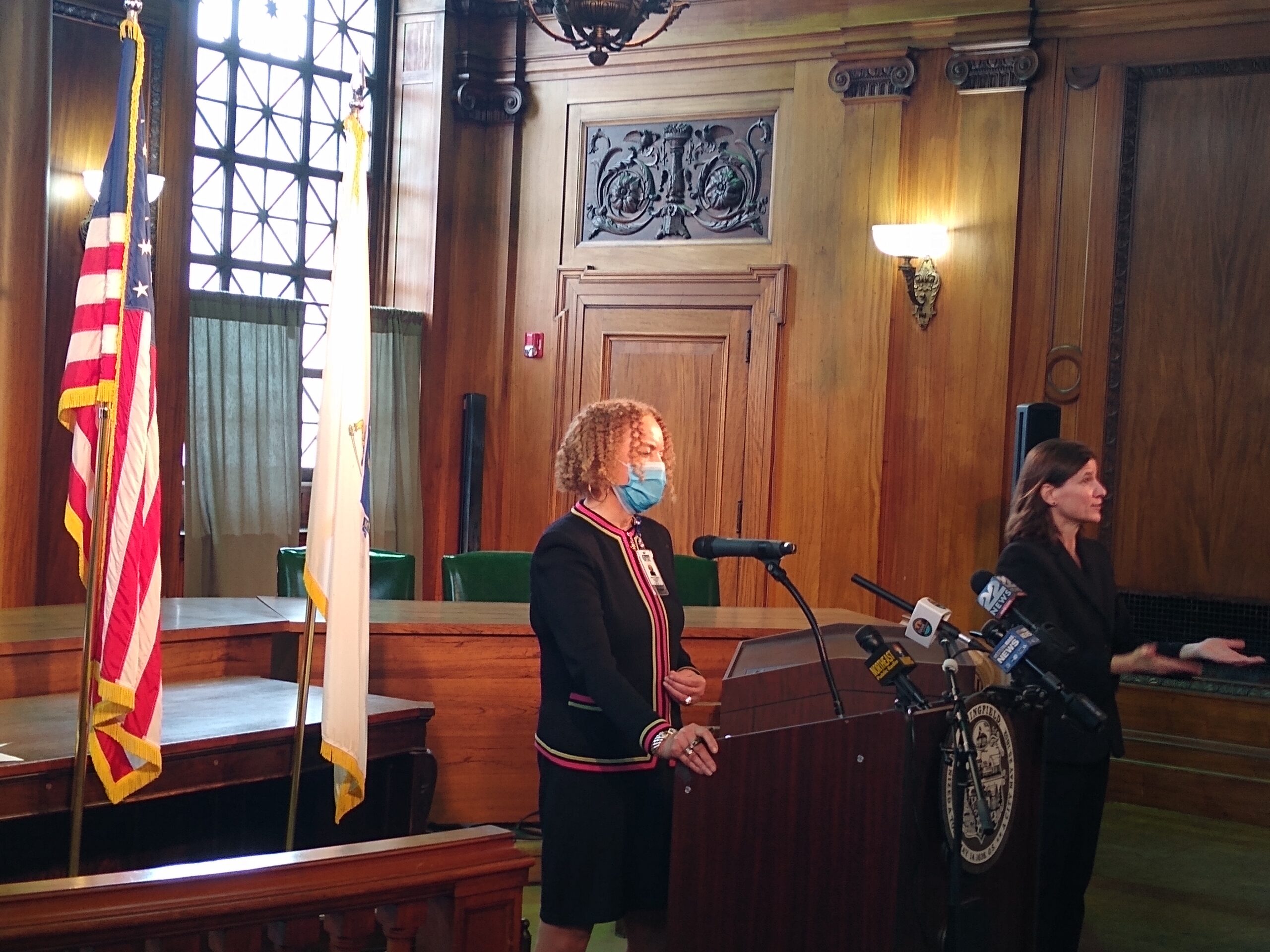 “We can’t rely solely on one mass vaccination site that is also being utilized by the entire region and in some cases the entire state,” he continued.

Since Joe Biden became president, states can be more confident about supply. While manufacturing will take time, Johnson & Johnson’s approval could be around the corner potentially speeding the national vacation campaign further.

But when Caulton-Harris first raised city mass vaccination plans, the vaccine situation was unclear. For weeks, the nation would be largely in the dark about how much supply of Pfizer and Moderna—both of which require two doses—it truly had, let alone when another candidate approval would occur.

Springfield’s Health & Human Services Department has been as proactive as it can. It has organized testing sites for city residents when possible. Staff at the Elder Affairs and Library departments, which organizationally report to Caulton-Harris, began fielding calls from seniors to schedule vaccine appointments via the state website. A city panel is aiming to battle vaccine hesitancy.

“It has been our constituents and neighbors who have been hit the hardest by the COVID-19 pandemic,” Lederman added. “As more and more residents become eligible for the vaccine under the state’s phased rollout, we need transparency around the state’s actual capacity to ensure that they actually have access to the shots.”

Events this month only underscore the need for more vaccine venues, though. The state opened a mass vaccination site at the Eastfield Mall. However, images of elderly individuals waiting in the snow and cold flooded social media yesterday. Before that a shoddy appointment scheduling website the state had thrown onto the Internet prompted frustration from seniors and caregivers.

The situation has deteriorated to the point that House Speaker Ron Mariano and Senate President Karen Spilka announced a new standing COVID committee with an explicit oversight mandate.

Today mostly a mausoleum to the city’s retail past, Eastfield and its grounds have become a beehive of coronavirus response. On the far end of the property near the former Penney’s, AMR is running a state Stop the Spread testing site. Inside the ex-Macy’s is the vaccination clinic.

On Wednesday, Longmeadow Senator Eric Lesser, who also represents Springfield, toured the vaccination site there. Outside, the recently-jabbed exited, beaming about the ease of the process. 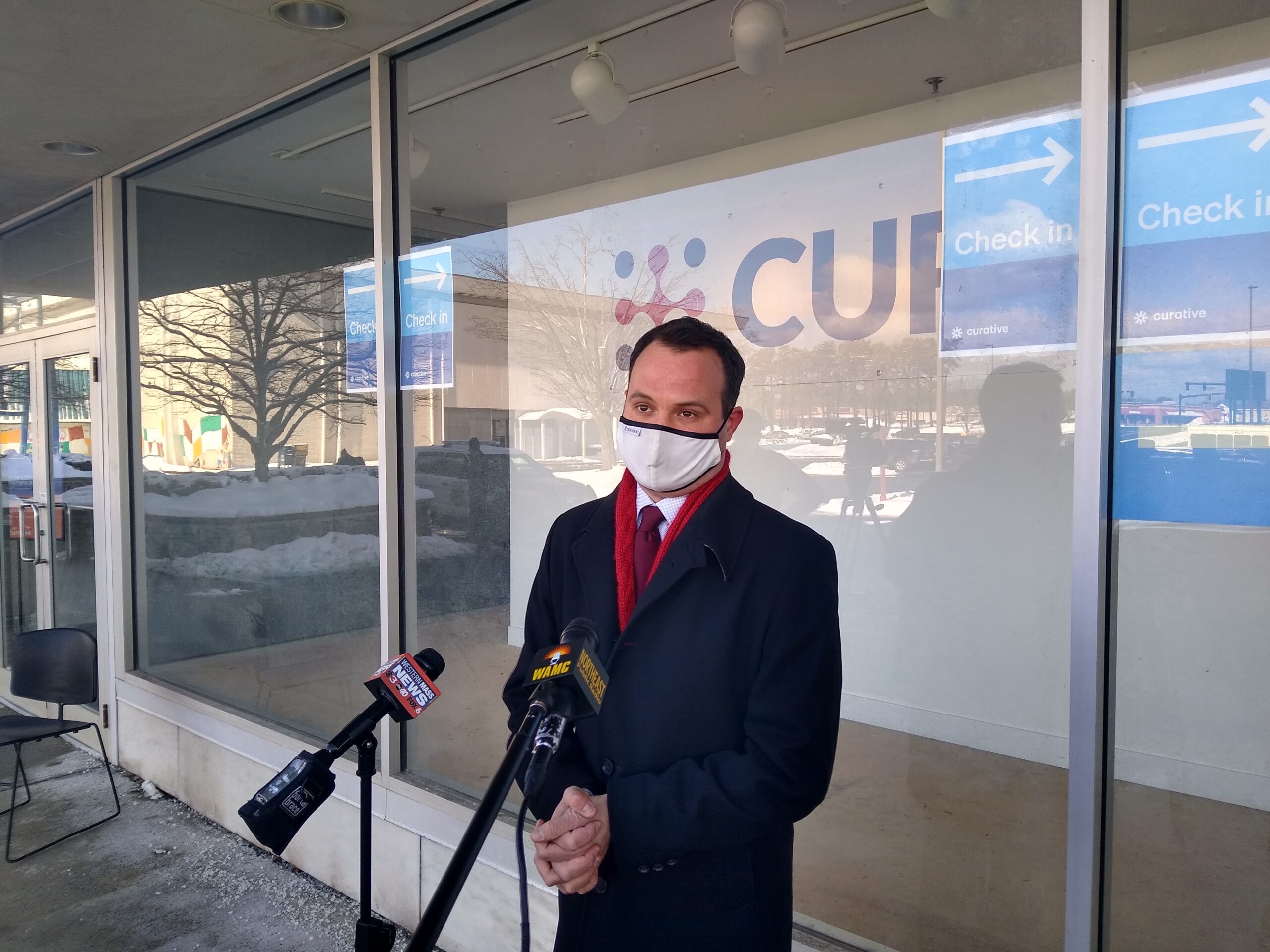 He said his office had been flooded with calls about those in their 80s and 90s waiting in the elements. The site’s operator, Curative, and the state have promised to do better. While the vaccinated-to-be should remain in their cars, they may now wait in the mall when the appointment nears.

Oddly news of the change came from Sarno and City Hall, which do not oversee the Eastfield vaccination site. The state does. The National Guard, also under the governor’s control, are assisting at the site as well.

Still, Lesser pointed to the continued problems with the sign-up website. While Baker’s administration has since activated a call center, that came only after Lesser and others filed legislation to mandate one.

There are other concerns. Statistics show that severe COVID-19 is more likely to strike—and kill—Blacks and Latinos, which together constitute the majority of Springfield residents. 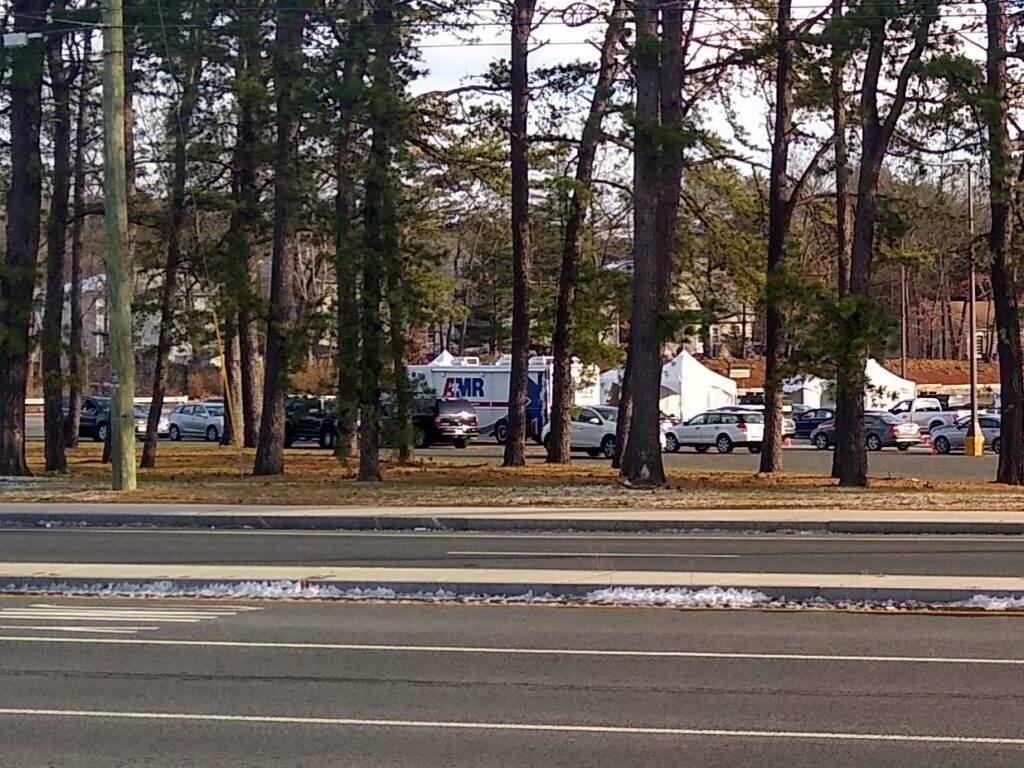 Insufficient state attention to Springfield and its vulnerable populations during the pandemic is not new. The state funded AMR’s testing site relatively late and perhaps too late to identify Springfield’s autumnal infection spike. It was also among the earliest in Western Massachusetts. The region, too, has played second banana to the east vis-à-vis testing.

Both the testing site and mass vaccination center here were and are regional. It draws those looking to be needled from across the 413—and beyond. Hypothetically, it could even inoculate patients from out of state if they work in Massachusetts. (Connecticut authorities have said they have reciprocity with all neighbors—including Massachusetts—to vaccinate nonresidents if they work in the state).

That does not help inner city residents. Rather, it begs for implementation of the city’s vaccination plan.

Local health departments are vaccinating in other states. Last month, a spokesperson for Connecticut Governor Ned Lamont told WMP&I the state’s local health offices were engaged in vaccine safety outreach and scheduling appointments. However, they were also standing up clinics for seniors over 75 in addition to vaccinating first responders.

The Springfield City Council has been upping its involvement, too. Council President Marcus Williams formed the COVID-19 Response Committee after becoming president last month. He appointed Lederman as chair. 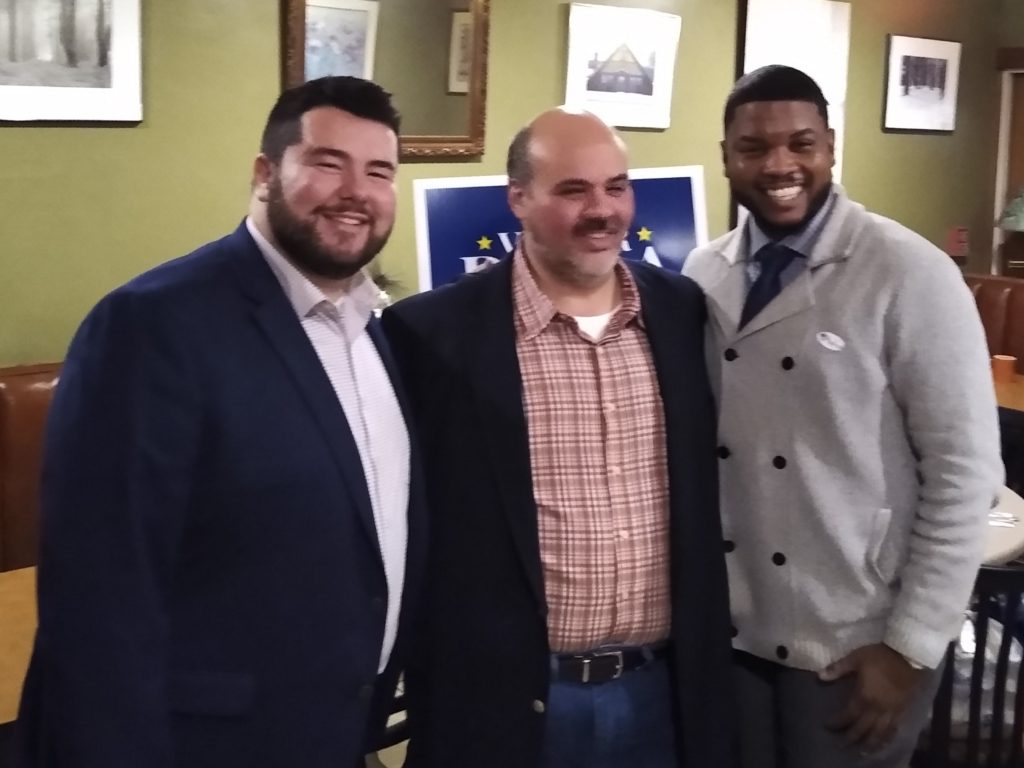 Over the last few weeks, the committee has met with officials and health experts to discuss the pandemic here. Lesser mentioned a meeting he and other legislators had with the panel Tuesday. Last week, the panel met with representatives for Congressman Richard Neal and Senators Ed Markey and Elizabeth Warren.

Caulton-Harris is a regular presence, too, and has discussed the local vaccination plans there as well.

On February 4, councilors sent Governor Baker and his HHS Secretary Marylou Sudders a letter urging him to prioritize vaccine distribution within individual communities, too.

“Mass Vaccination sites can serve a purpose, but they cannot be the only option for cities the size of Springfield,” Councilors Lederman, Williams and eight of their colleagues wrote.

“This is why it is imperative that your administration moves swiftly to make available an appropriate number of vaccine doses and accompanying funding directly to municipalities like ours, and allow our Health Commissioners and Boards of Public Health to administer a localized vaccine distribution plan to ensure that all of our constituents have equitable access to the COVID-19 vaccine,” they continued.

At Monday’s COVID briefing, Caulton-Harris was hopeful more vaccine would come to her department soon. Yet, it remains unclear when that will be.

An email to Massachusetts’s COVID-19 task force seeking comment about releasing vaccine to local boards of health had not been returned as of posting time.