Executive Privilege: First & Downing for Dems in the Race for Gov… 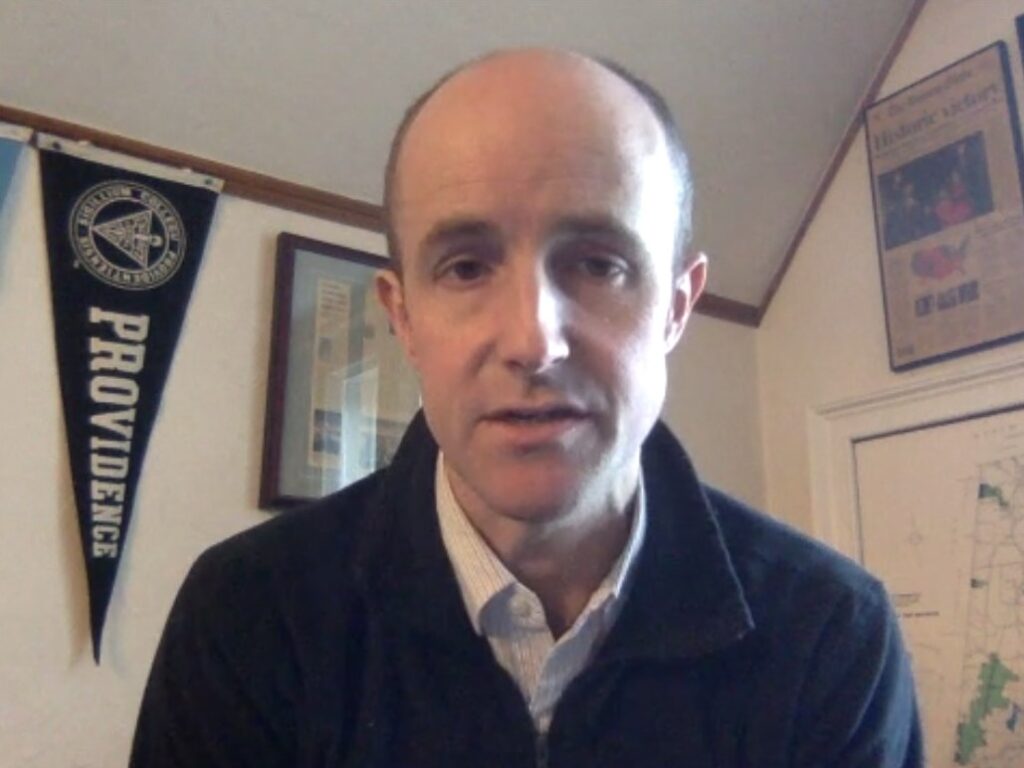 Ready to get Downing to business–in government? (still via Zoom)

Nearly two years ago a former state senator and a mayor met at a street corner in East Boston. What brought Ben Downing and then-Mayor Marty Walsh to this intersection was the naming of a new hero’s square. It is difficult to throw a Fenway frank in Boston without it landing in such squares, but this one would carry the name of the Downing family, which got its American start in Eastie years ago.

But Downing had been a state senator a commonwealth away in the Berkshires. His young family now lives in East Boston, still among the Hub’s most diverse neighborhoods despite gentrification. Now a candidate for governor, Downing sees the arc of Massachusetts’s history between his ancestors and the kids his son Malcolm plays with at the local Y.

“He goes into a room of kids that come from radically different places than us in all from significantly different places together,” Downing said. “that is that’s his learning experience. That’s his community.” Among them are new lines of leaders locally or perhaps in other communities across the state as the Downings had been.

For a decade Downing represented the state’s westernmost senate district, anchored in Berkshire County. He was only 26 when he took the oath of office in 2007, the same year a once-largely unknown Clinton-era Justice Department official, Deval Patrick, became the state’s first Black governor.

Downing retired in 2016, keeping a pledge to serve no more than 10 years. Afterward, he worked in the clean energy industry. Climate change is a central plank in his campaign today.

For Downing to be Massachusetts’s leader, however, he must clear quite different hurdles than those past Downings or present immigrants encountered. The first major Democratic name in the contest, a crowded primary with heavy hitters like Attorney General Maura Healey could still await him. Then there is the question of the incumbent Republican, Governor Charlie Baker, seeks reelection.

Downing faces the added complications of campaigning in a pandemic. Although the shroud of the coronavirus could be lifting at long last, it could be months before in-person events become the norm. Politics remains a game of relationships and forging them remotely is not the easiest endeavor. 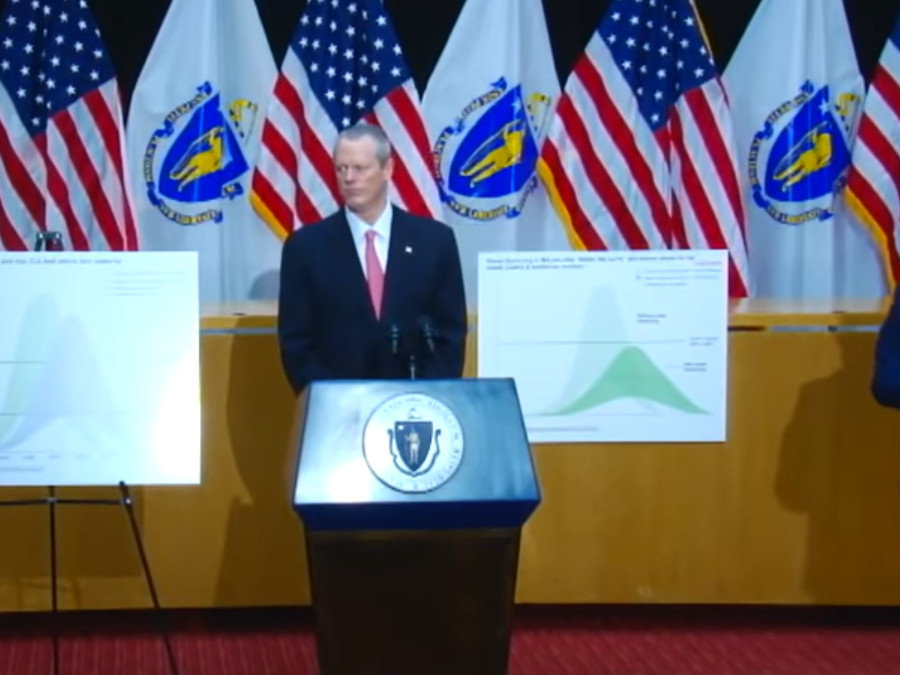 Will he stay or will he go? (via YouTube/Mass Governor’s office)

Still, he has plowed ahead. Since announcing in February, he has raised more than $227,000 through March 31. Not a fortune, but ahead of the pace Democrats’ 2018 gubernatorial nominee Jay Gonzalez had logged four years ago. Baker has more cash on hand than Downing, but he has raised less. Though, Lieutenant Governor Karyn Polito has north of $2 million. Her money could be used either for a Baker-Polito reelect or a Polito solo act.

Whether Baker seeks reelection is Beacon Hill’s greatest guessing game. The more immediate concern for Downing would be the primary. Starting early is not just about money, but locking down support. While Massachusetts remains whiter than other parts of the country, residents of color have greater influence in Democratic primaries. They also experience many of the state’s inequities.

Speaking to WMP&I shortly after he announced, Downing acknowledged the complication of coming into this race as a white man “from a place of privilege.” His opponents could be not only Healey, who, if she ran and won, would be the states first openly LGBTQ governor. Harvard professor Danielle Allen, who is Black, and State Senator Sonia Chang-Diaz, who is Latina and Asian, are also eyeing bids.

“I thought deeply about whether or not I should even enter the race, given the need for more diverse and more equitable representation in politics across Massachusetts,” he said. However, Downing explained, “I believe that, that white people and all people with privilege have a responsibility to fix injustice to fight systems of oppression.”

Downing acknowledged that outreach to the commonwealth’s diverse communities could be difficult when the campaign is starting out on Zoom. However, he also observed that many young activists these days grew up online.

The initial push has gone well, he said in a statement this week to WMP&I.

“We’ve been all across the virtual campaign trail these past few months, joining democratic town committees, student groups, and other community events to talk about building a fairer, stronger Massachusetts,” Downing said. “While I cannot wait for a return to some safe, in-person campaigning soon, I’m energized by the response we’ve gotten so far, Zoom by Zoom.”

Among the online meetups Downing has had was with Holyoke politicos. Despite acute Zoom fatigue that is rife in society, organizers described a good conversation about the issues and Downing’s personal history.

No waiting for Vidot. (via chelseama.gov)

Other outreach has paid dividends. Chelsea City Councilor Damali Vidot spoke highly of Downing, citing his support for marginalized in communities in the Senate.

“The main thing I appreciate about Ben is his empathy,” she said. Vidot noted that Downing was a lead supporter of a transgender rights bill about 10 years ago. “I’m surprised a cisgender white man would stand up for that.”

Vidot suggested he could bring people together, too.

“I think where we are right now in the world, we need someone who can, kind of convene, for progressives, moderates and Democrats across the state,” the Chelsea councilor said.

Although Downing’s late father had been a popular Berkshire County district attorney, his own foray into politics was never certain. An environmental class in college and frustration with the Iraq War vote in led the Pittsfield native to the offices of Representativs Richard Neal and John Olver. Downing’s own political career was sudden, taking off after Andrea Nuciforo vacated the seat in 2006. Though he and his family had cachet in Pittsfield, Downing had to overcame more senior Berkshire political figures to win the seat.

In office, Downing developed a record on supporting civil rights, regional equity and the environment.

Modern bread lines have become all-too-common during the pandemic, but food insecurity is, unfortunately, nothing new. Downing had worked to reduce hunger in the Senate, too, according to Andrew Morehouse, executive director of the Food Bank of Western Massachusetts.

“He led the charge to increase the Massachusetts Emergency Food Assistance Program (MEFAP) to provide the four Massachusetts food banks with the necessary funding to purchase food to meet the increased need of food assistance during the Great Recession,” Morehouse said.

“It just changed my perspective, deepened my empathy and fueled my sense of urgency,” he said of challenges like his father’s death. “When Nate passed, it just took both of those to another level, right?”

Urgency underpins his agenda. In his statement this week, Downing teased policy announcements in the next few weeks. Even as he continues to hear out Bay Staters’ concerns, Downing promised to outline “what we believe to be the most comprehensive, and ambitious policy agenda this race will see.” 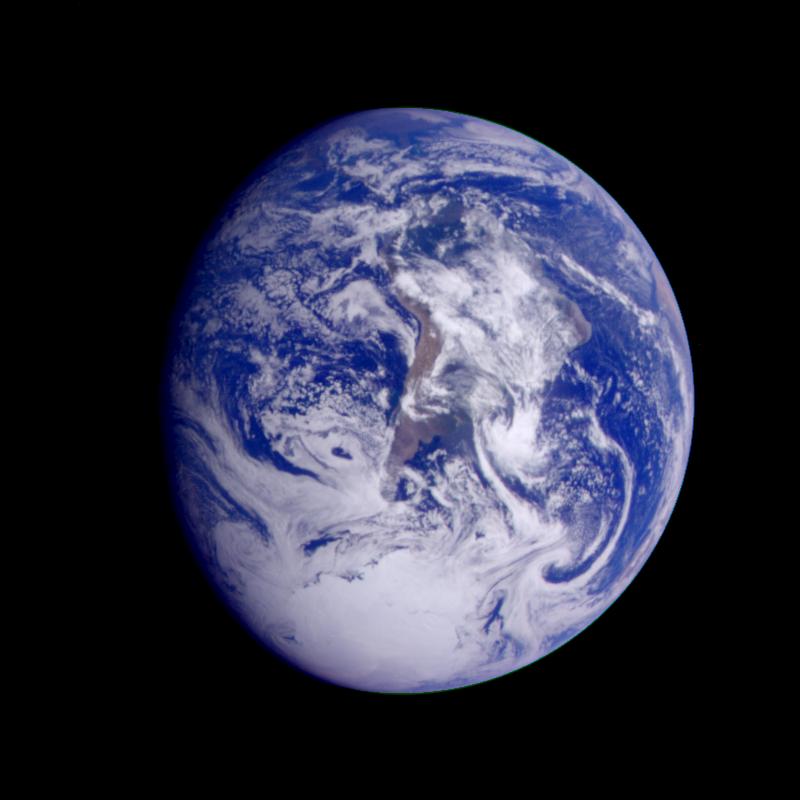 You are here. Don’t leave the heat on.  (via wikipedia)

When he spoke to WMP&I, Downing was only beginning that policy process. But some issues such as regional equity and climate change were always going to be in play and have been. This month he released his own climate plan, which would, among other things, pursue 100% clean electricity by 2030. All energy would come from green sources by 2040. Half of climate spending would benefit environmental justice communities.

These came only days after Baker agreed to a climate bill he had rejected weeks before. While Downing agreed with many of the bill’s provisions, Baker’s conversion did not impress him.

“For years Governor Baker and Massachusetts state government have approached the climate crisis with sluggishness and delay. That makes today frustrating,” he said in a statement last month.

If Baker does not seek a third term, Democrats will have a clearer path to victory. Despite the best efforts of Baker & Friends, Polito remains something of a cypher. However, if Baker does seek another term, his rivals will have to woo not just independents but many Democrats. Both moderates and some progressives have been frustratingly acquiescent to his Excellency.

Before the 2018 election Downing cautioned against trying to caricature Baker as some latent Trump figure. In a tweetstorm, he said Democrats had to focus on the governor’s record, including failures on transportation, regional and social equity, even child protection.

However, the issue is bigger than just Baker. Governor Patrick had come into office with grand ambitions, too. While he realized many, others ran aground the inertia of Beacon Hill.

Downing praised Patrick’s ambition and his ability to communicate to residents. Yet, he said, inside the State House the former governor’s messaging could be far from perfect. Baker, by contrast, has no vision but speaks legislators’ language well. 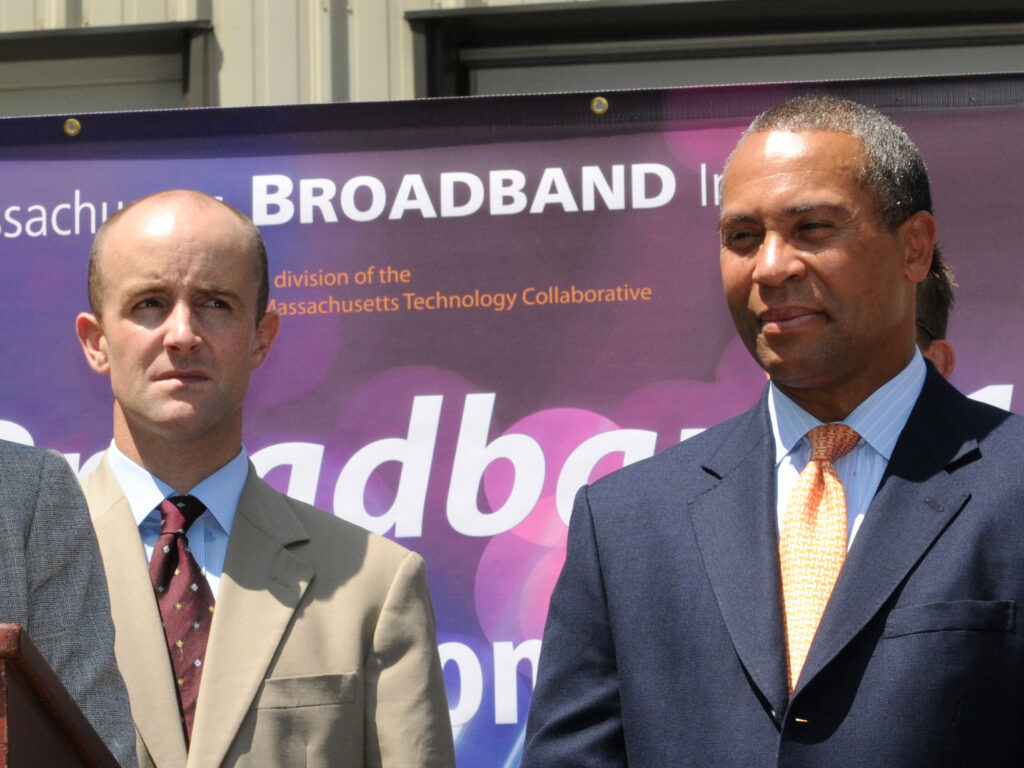 Room for improvement? Sen. Downing & Gov. Patrick at a broadband event circa 2011. (via US Dept. of Commerce)

To succeed where both had come up short will require building support on the ground and sending clear signals to lawmakers.

“I think it’s trying to combine that that vision, that ambition, that sense of urgency, that Governor Patrick brought to the day-to-day work with the ongoing communication with stakeholders,” he said.

The problems run deep, though. Ambitious environmental goals mean little if investments like transit take longer than the time left to arrest climate change. Downing said the state had to both build government’s credibility and build back its capacity that decades of outsourcing and privatization had hollowed out.

To reverse this and to secure the public’s buy-in may not be easy or particularly quick. The closing window of climate change notwithstanding, restoring state government will be a long process. However, he said, it ties into outreach to neglected communities, whether far-flung Berkshires towns or immigrants in East Boston. That can take the form of locking in democratic reforms that had passed on-the-fly amid the pandemic or showing up in communities to make the pitch in-person—public health conditions permitting.

“So much of this is about restoring trust, because if we don’t have trust, then we aren’t going to be able to do these big things that require us locking arms and doing them together and doing them through state government,” he said.