Take My Council, Please: Have You Had Your Legislative Break Today?…

SPRINGFIELD—The City Council considered and passed a plethora of legislation at its Monday meeting this week. Action commenced on a pair of historic districts—each were at different stages of passage. The ordinance banning the sale of non-shelter animals at pet stores also passed the Council. However, there were other legislative items including a new attempt to correct succession in ward seats.

Other new legislation included bills to establish a youth poet laureate. The Council also advanced legislation to strengthen the city’s existing rules on tax breaks to prevent wage theft. The agenda included a few special permits. One did not pass amid a dispute between a McDonald’s and an abutting landowner.

Due to the laborious nature of the hearings, special permits have begun to populate regular meeting agenda. Three were before the Council Monday. One was for a car lot on Carando Drive and another for a junkyard on lower Liberty Street. Both passed unanimously. However, a modification to a McDonald’s drive-thru permit was sent back to committee.

The more easterly McDonald’s on Boston Road is seeking to revamp its property. However, an abutter on Etna Place joined the Zoom call to complain about garbage, noise, and rude staff. The back and forth between the sides went on for a while until councilors voted to continue the hearing.

Councilors accepted the minutes from four prior meetings and the February revenue and expenditure report. Comptroller Patrick Burns said the report reflected an influx of tax revenue and added snow removal costs.

At Public Works chief Chris Cignoli’s request the Council continued a utility petition for Armory Street. The Council did the same for a speed hump ordinance. Who will be the lucky streets on this season of The Paver? (via wamc.org)

The annual state appropriation to the city for road projects under Chapter 90 passed with little debate. Usually, this item prompts a granular review of which streets DPW thinks are hot and which ones are not. However, after Cignoli explained which thoroughfares and arterials would receive the rose this year, councilors appeared to have fewer questions. Among the lucky roads were Chestnut Street, Ft. Pleasant Avenue and Pasco Road.

Ward 8 Councilor Orlando Ramos abstained from the unanimous vote. As a state representative as well, Ramos could or did vote on the funds as a legislator.

Ramos also opened a debate about the city’s towing contract with a call for greater awareness about the impact on minority residents. The actual item was a memorandum of understanding to harmonize the city’s relationship with the Springfield Parking Authority (SPA) and the towing contract with CJ’s towing. The changes would all contractual relationships to an end this November. A legally distinct entity that the city controls, the SPA manages on-street parking enforcement in Springfield.

Assistant city solicitor Thomas Moore said the city and the SPA want to solicit better bids. He said the issues Ramos and other councilors raised could come up in this contract and in the weeks ahead. Moore noted many fees are regulated under state law. Others the vendor charges at their discretion.

With the promise of further discussion, the Council approved the memorandum. They also approved an MOU with the Springfield Business Improvement District.

At-large councilor Jesse Lederman introduced the two new pieces of legislation and both passed first step unanimously. As for the Youth Poet Laureate, Lederman said the bill would create an office similar to the existing City Laureate. This would be restricted to younger poets.

The other ordinance would work with in concert with earlier ordinances the Council has passed to protect employees’ rights in city contracting. Over the last few years, the Council has approved laws that allow for rescission of tax breaks when developers fail to follow rules like workplace safety or commit wage theft. Lederman’s ordinance would extend this to city contracting. He noted that employers abscond with $700 million in employee wages every year in Massachusetts.

Although the wage theft ordinance passed first step, debate will continue in the coming weeks.

Ward 2 Councilor Michael Fenton and Ward 6 Councilor Victor Davila sponsored a home rule petition that would modify the charter and establish special elections for vacant ward seats. The item comes the heels of the Council’s selection of Gumersindo Gomez to fill the vacancy his son created after taking office in the State Senate. 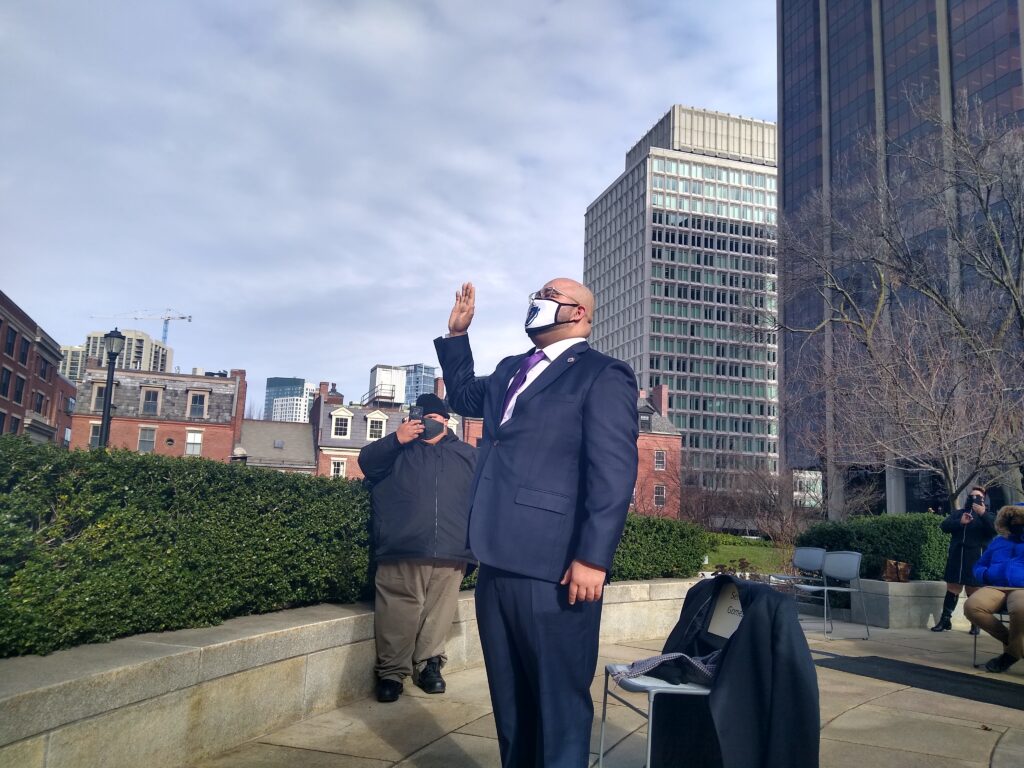 Senator Gomez in January. Councilors chose a Gomez to succeed Gomez in Ward 1, but they hated having the task at all. (WMP&I)

The Council had the uncomfortable task of filling the seat because Senator Adam Gomez faced no opponent in his last race for Ward 1. Even that presents problems as in ward races it necessarily seats the loser of the contest. By comparison, at-large vacancies are filled by next-highest vote recipient, imprinting some democratic legitimacy on the lucky runner-up.

The petition mirrors one from 2013 that died in the state legislature. This version, however, skips a referendum. City lawyers had previously insisted this was necessary, but Boston implemented nearly the same special election provision for district Council seats 28 years ago without any plebiscite.

Davila and Fenton requested it go to committee for further review. As a home rule petition, it requires one Council vote and the mayor’s approval before going to the state legislature. Ramos abstained on the committee vote as well.

A little over a week after a rally on behalf of the city’s Asian-American community, councilors adopted their own resolve. The recent outpouring of support has bubbled up in the aftermath of the shooting in Atlanta that took the lives of several Asian individuals. While the motives of the attacker are complex, the race of the victims underscores the abused and discrimination Asian-Americans have experienced since the coronavirus dawned on the United States.

The Council took final action on a historic district around the former All Saints Church in Springfield. The structure is now in the hands of the Drama Studio, which is seeking historic preservation funds to repair the façade and perform other upgrades.

A second historic district is afoot around the Gunn Block. Sitting at the corner of State and Walnut streets, the structure is the oldest commercial building in the city. The owner, DevelopSpringfield, has been restoring it and wanted to ensure its preservation efforts would endure. 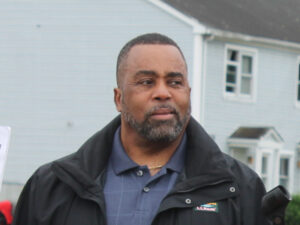 Shorter Edwards: Come on, do it for the animals! (via Springfield City Hall)

The final action was second and third step on the new ordinance that aimed to ban puppy mills. The bill outlaws the sale of dogs, cats and rabbits unless they come from shelters. It should not have any impact on private breeders. Ward 3 Councilor Melvin Edwards, its chief sponsor, and animal control director Pam Peebles framed it as a humane measure.

There was some question about the legality of the move that did not arise at the prior meeting. A woman that Peebles believed was the owner of Springfield’s only affected pet shop became unmuted and threatened litigation.

Councilors debates among themselves about the city’s legal exposure, but Edwards pressed for passage. Moore, the assistant city solicitor, told councilors he could find no reason to believe the city was exceeding its power with this ordinance. Rather, the Town of Holliston passed a similar by-law not long ago. This came after a greenlight from the Attorney General, whose office reviews all town by-laws. The review is not binding on the courts, but it is persuasive.

In its approval of Holliston’s by-law, the Attorney General struck language about the seizure of animals. The AG’s office said that the penalty for violating by-laws is fees unless another power is specifically permitted under statute. Ordinances are analogous to by-laws so Springfield may not be able to enforce this ordinance’s seizure language. This language alone could be grounds for litigation. However, a court would likely look askance at such a lawsuit unless the city tried to enforce this provision.

Despite rumblings of fissures among its ranks, Monday’s many bills signal the body remains able and willing to legislate aggressively. Granted, some items, like the historic districts, had outside support. Some councilors, like Lederman, are consistent lead sponsors, but not always and he has had more company of late. Of course, as the ostensibly perturbed pet shop owner illustrates, some ordinances may not enter into force without a fight.