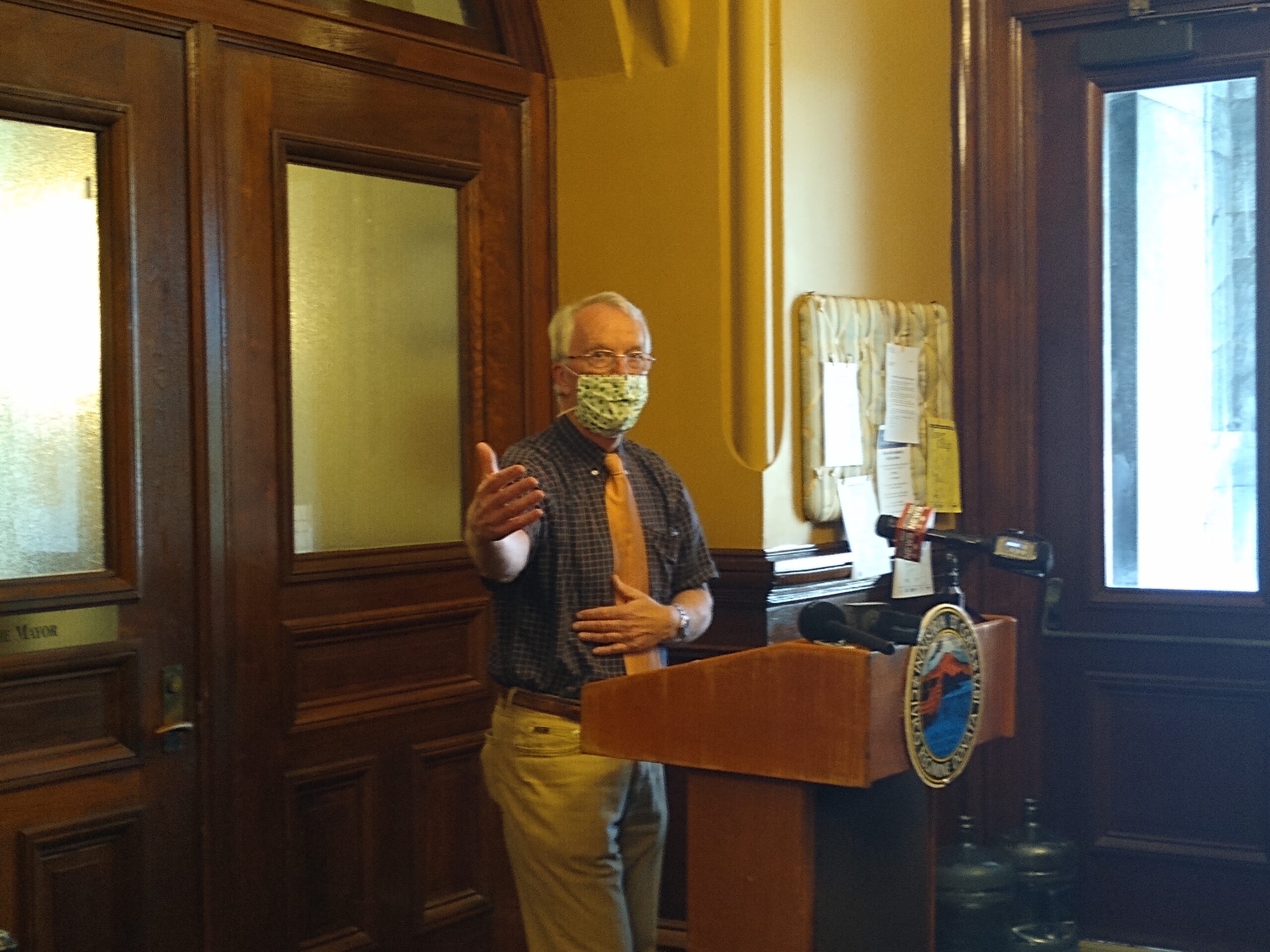 HOLYOKE—Acting Mayor Terence Murphy announced Wednesday he will…not be a candidate for anything.

Early this year, Murphy became Holyoke’s acting mayor succeeding former Mayor Alex Morse and Council President Todd McGee who very briefly acted as mayor. That came after Morse’s resignation and a flurry of legislative maneuvers to allow someone other than McGee act as mayor. Given that two city councilors were already running to succeed Morse—who had earlier declined to seek reelection—the presumption had been Murphy would not seek the office himself.

Then came paperwork Murphy filed with the Massachusetts Office of Campaign & Political Finance on Tuesday.

“I really wanted to emphasize that I am not a candidate,” Murphy said at a press conference outside his City Hall office. “People will be much, much more cooperative with me knowing that my only agenda is the citizens.”

The filing with OCPF had come as a shock, prompting a brief kerfuffle on Twitter. Had Murphy, a longtime public and community figure with three separate Council tenures, jumped in, it may have jolted the race. Few of the candidates thus far could have had such an impact. Incumbency is not destiny, but it could have granted Murphy a tremendous leg-up while scrambling political arithmetic here.

It turns out that the filing, which suspiciously lacked a treasurer and campaign chair, was a formality. As an acting mayor not running for a local office, the filing was a ministerial requirement under state law. Murphy has also not taken out papers with the City Clerk.

The Daily Hampshire Gazette first confirmed Murphy’s filing with the OCPF was not a prelude to a mayoral bid.

Just spoke over the phone with Murphy — Holyoke's Ward 2 city councilor and current acting mayor. He laughed and said he was told he had to file that paperwork. He said he has no intention of running to become the city's next mayor later this year. https://t.co/MqI5U7W3Tm

Acting mayors across the state have gone on to win mayoral elections in which they became or already were candidates. Retiring Northampton mayor David Narkewicz became acting mayor during his first bid a decade ago. Likewise, the late Tom Menino, Boston’s mayor for 20 years, won his first full term as acting mayor in 1993.

However, there are examples of it not working out, too. The late Vincent Dimonaco, Springfield’s acting mayor in 1989, fell to colleague Mary Hurley in a special mayoral election. Right now, Boston acting mayor Kim Janey faces the burden of disentangling a police leadership imbroglio not of her making. Still, any missteps could haunt her as she seeks a full term this fall.

The idea of Murphy running for a full term as mayor of Holyoke had seemed unlikely for some time. When the Council selected him to succeed McGee, Murphy spoke about the time the task would take from his family in terms of months, not years.

Then last week, he submitted a careful budget to the City Council. In it are potentially unpopular sewer rate hikes. Deficits in the sewer department—which the independence of the water department complicates—have been a political riptide for years, ensnaring many a Paper City pol.

Murphy said clarifying his decisions, hopefully, could help steer the ship of city through the pandemic’s close and the remainder of 2021.

“They may disagree with me,” Murphy said of other Holyokers, “but I think we’ll disagree for the right reason as opposed to some political advantage.”