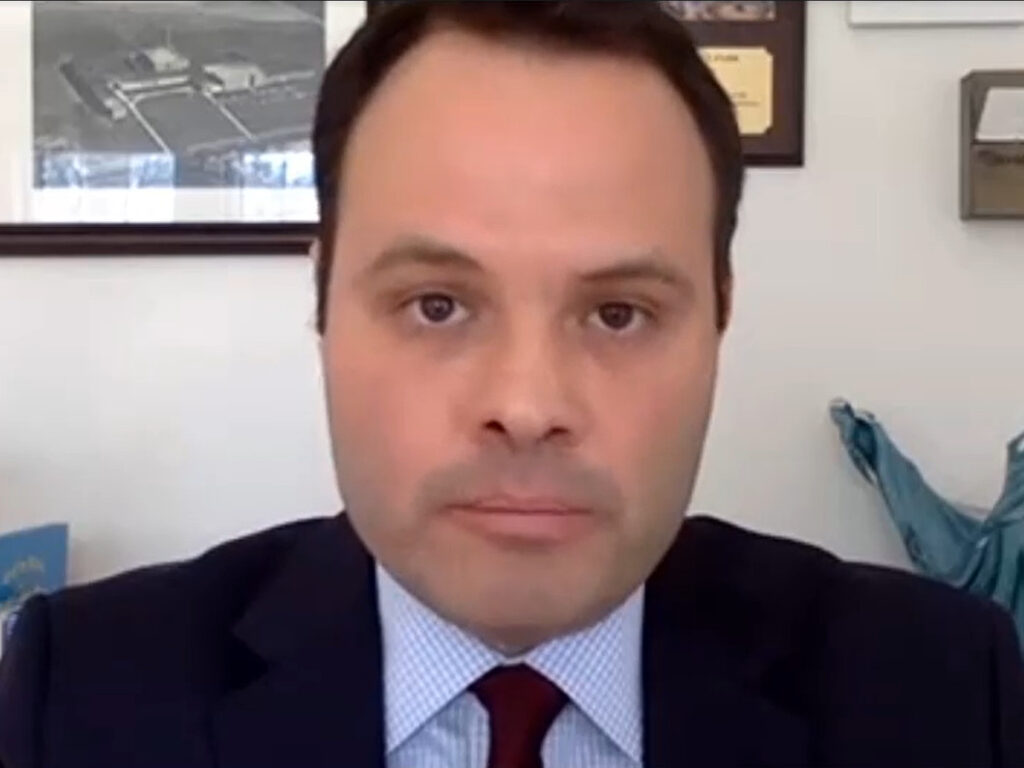 Lesser Zooming into a new era? (still via malegislature.gov)

LONGMEADOW—Some months ago, a stone-faced Senator Eric Lesser appeared on a split screen with Governor Charlie Baker during a committee hearing on the early vaccine campaign. Lesser laid into Baker, for a botched website rollout among other errors. His Excellency expressed visible frustration.

Today, with Massachusetts’s high vaccination rate, some conventional wisdom held that Baker bested his critics. That was facile, possibly wrong and misses a broader point. Like a college freshman using the restroom too soon at an Allston kegger, the seal on Baker’s impenetrability—polling be damned—has been broken. More importantly, along with a new administration in Washington, Lesser and his agenda, specifically rail, have entered a changed political moment.

“We’ve been more productive, and gotten more done than could have ever really imagined,” Lesser said reflecting on his arc since winning office in 2014. Now all the ground work to establish better rail service to Boston has a chance to capitalize on fortified federal support.

Lesser’s tussles with the governor can be overstated. As Senate chair of the legislature’s economic development committee, Lesser and the Baker administration have collaborated. They have passed bills that tackled complex issues like housing and zoning.

Yet, they have often been a loggerheads on East-West rail. Baker has never been enthusiastic about the project. Though the project’s popularity has not flagged, the governor has freely spent his own political capital to fight it.

For the majority of Lesser’s time in office, however, another specter loomed over everything. The Trump administration’s actions prompted Democratic electeds like Lesser to take stands against it.

“Obviously the posture of the office changes a bit, in order to respond to a lot of the really damaging proposals that came up under the Trump administration,” said Ryan Migeed, a former communications director for Lesser.

He pointed to Lesser’s work to protect transgender rights and student borrowers. Though Migeed averred none of this threw his old boss off course, either.

“That is not to say that it changed Senator Lesser’s priorities,” he said.

Yet, with Amtrak Joe Biden in the White House, an old college friend is US Secretary of Transportation and support for the project from the region’s powerful congressman, Lesser’s hopes for better rail service to Boston look brighter than ever.

On the eve of spring, when outdoor masking was still a thing and the vaccine was unavailable to youngs like the senator, 36, and your editor-in-chief, he stressed both cooperation and differences with the governor. Walking around neighborhood blocks and to a park near where Lesser lives—and grew up—he acknowledged that the political mood of last few months has shifted from the prior four years.

“Well, I think we don’t have the distraction,” he said, when asked if Trump’s shenanigans kept the spotlight off Baker. “I think some of these issues have always been there,” Lesser continued. He pointed to the Registry of Motor Vehicles’ failure to revoke the license of Volodymyr Zhukovskyy. He went on to cause an accident in New Hampshire where seven people died.

“My feeling is when a governor is doing things right and is doing things that are helpful for their constituents, you support that,” Lesser said. “And when things aren’t working correctly, you call that out and you demand change.”

The early vaccination missteps were such an occasion. When seniors could begin signing up, there was no call center. Lesser sponsored a bill to mandate one and the Baker administration established a hotline soon after. Then poor planning at the Eastfield Mall mass vaccination site in Springfield left seniors standing outside in the cold.

That, and the generally slow rollout early on, prompted legislative hearings, which Northampton Senator Jo Comerford chaired. They were replete with tense confrontations between Baker and legislators, Lesser among them.

“I think we could do more on oversight,” Lesser added when asked whether the legislature has held Baker to account enough generally.

As Massachusetts’s vaccination campaign took off, some seemingly felt the governor had shown up his critics. Then The Boston Globe bombed any Baker-world victory laps with a devastating tale about his appointment of Bennett Walsh to lead the Holyoke Soldiers’ Home. Meanwhile Hampden County still lags in vaccination rates, earning the attention of prominent public health figures like Dr. Ashish Jha.

We tend to see things as blue vs red

For vaccines, not that simple

Yet vaccination rates there are low

Migeed said problems the 413 has encountered during the pandemic are not a surprise.

“Anybody who lives in Western Mass, appreciate how politicians in Boston leave Western Mass behind,” he said. This was the battle Lesser has been fighting his whole career, Migeed added.

Lesser has called for Baker to return to the legislature to answer questions The Globe’s Soldiers’ Home report raised. The governor’s office did not reply to an offer to comment on the fluid COVID news.

Baker may weather these struggles, but history suggests just the risk of turbulence can prompt him to bend. It was in the run-up to his 2018 reelection campaign that Baker agreed to study East-West rail. If Baker declines to seek reelection, his hand weakens even more. While Lesser has faulted the study’s ridership assumptions, it still sets the table for federal funds. Though, Baker’s opposition and/or disinterest in the project is “not an insignificant impediment.” 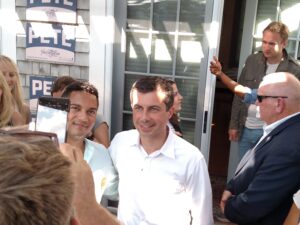 Secretary Pete, pictured as a presidential candidate in 2019. (WMP&I)

“We now have a finished East West rail feasibility study just in time for a president and a Secretary of Transportation and a congress that’s committed to invest in infrastructure,” Lesser said.

Broader political momentum is building, too. While Congressman Richard Neal has consistently supported rail projects, he has made East-West rail a priority. The Ways & Means Committee he chairs has a big role in assembling President Biden’s infrastructure bill. Lesser also overlapped with US Secretary of Transportation Pete Buttigieg at Harvard. The senator said he has spoken with his former classmate about the project in the past.

That said, the federal government may not wish to referee spats within states.

“I view our role as laying out the broad policy strokes,” the secretary said during an April appearance at the White House in response to a question about disagreements between state and local leaders.

Nevertheless, Lesser continues to rally support. This month he hosted Hartford Mayor Luke Bronin for a Lunchtime Livestream to discuss rail. An Obama admin alum like Lesser, the Insurance Capital’s mayor shared an enthusiasm for East-West rail which could connect his city to points beyond Springfield.

“The fact that sitting here in Hartford I cannot take a train to Boston or to Worcester is just crazy,” Bronin said.

He added that no one should underestimate the interest in rail service.

Happier zooms to geek out on transit with Hartford Mayor Luke Bronin. (still via Office of Sen. Lesser)

“What we call the Hartford Line, connecting New Haven to Springfield, saw ridership far in excess of the initial expectations,” Bronin said. “It unleashed and revealed a much high demand for that kind of transit than people assumed beforehand.”

Rebecca Townsend, Longmeadow’s Town Moderator and longtime supporter of rail service, said she feels a shift too. When her advocacy began back in 2006, the focus was on service south to New Haven and Hartford.

After years of pushing, those trains finally pulled out of the station. Regional planners felt this had to happen before East-West rail. The latter still wanted for political support, as pols avoided offending Peter Pan Bus Lines.

“It was quite infuriating,” she said.

However, Townsend, who knew Lesser as a politically active teenager, found that changed when he took up the cause during his first campaign. She said Lesser could translate people’s stories to build support and understanding about how the service could benefit everybody (including Peter Pan).

Shorter Townsend: Not moderating my hopes! (via Twitter/@RebeccaTownsend)

That persistence, Neal’s support and now a president who once rode Amtrak daily for 35 years has created a far more favorable environment.

“I almost want to say it has an air of inevitability not and it did not have that 10 or 15 years ago,” Townsend said.

The evolution of the project itself has contributed to the progress. Lesser acknowledged that early on East-West rail was presented as “local infrastructure project.”

“What people I think have increasingly come to realize is that this project will arguably help the metro Boston area as much as it would help us because the issues we face are complementary in nature,” he said.

Problems like Boston’s high housing costs now get as much attention as how service could connect Boston jobs to the 413’s residents. That has prompted endorsements from the commonwealth’s east and west.

“Senator Lesser has built the support for that project in particular going back to 2014,” Migeed observed.

The project’s advancement would complement infrastructure needs along the existing commuter line to Worcester. Plus expanded service west could induce demand between communities big and small from Western Mass to Boston. 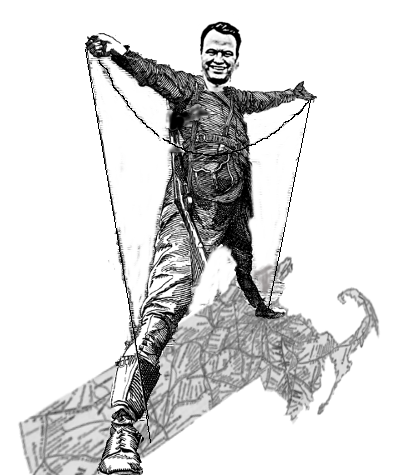 The next few months could prove crucial. Beyond the fate of Biden’s infrastructure plan, idling amid possibly fruitless negotiations with Republicans, is the push in Massachusetts. Lesser remains a key figure in the legislature.

But for how long? With redistricting in the ether and talk of Lesser’s future competing only with the weather as a prime kibitzing topic among Valley politicos, it is reasonable to wonder. The Globe has mused about Lesser running for attorney general or lieutenant governor.

“I’m focused on the policy,” Lesser has said, adeptly brushing off questions about his future. “We have a huge portfolio that we’re working to move through the legislature right now.”

He pointed to work on divvying up American Rescue Plan dollars. Other priorities are vocational training, environmental issues like biomass, and pulling the state’s cultural economy out of its pandemic tailspin.

When asked if that busy agenda would keep him in the legislature for a few more terms, Lesser did not say.

“I’m going to do what moves our priorities forward, and what lifts the communities that need support,” he replied.