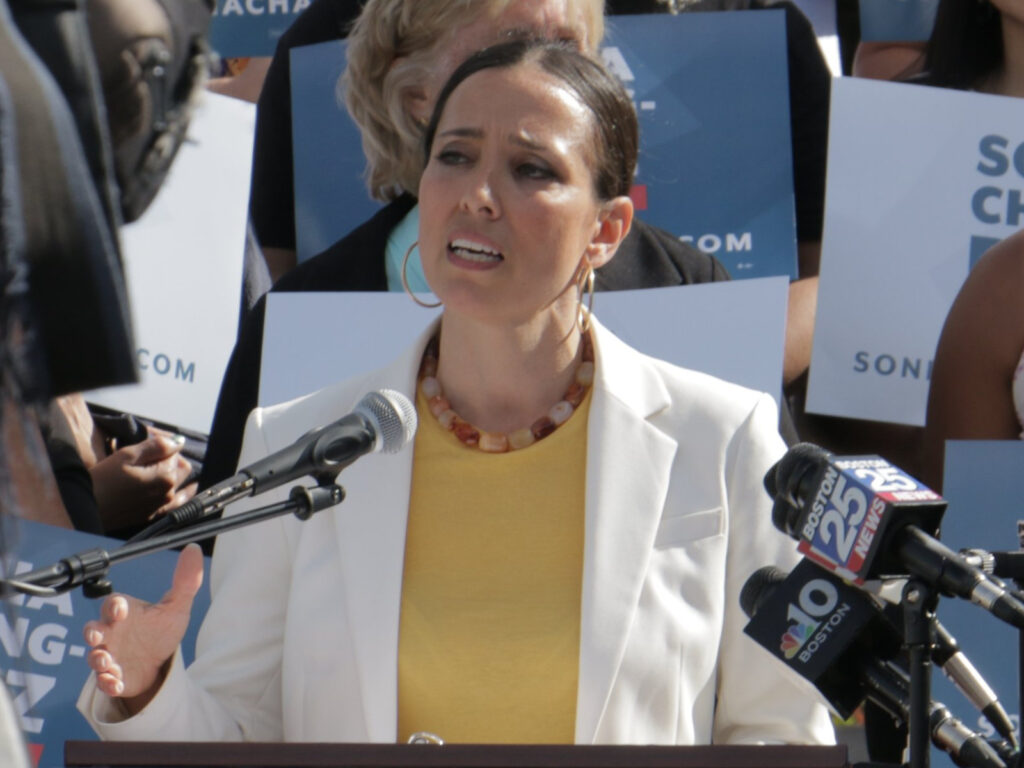 Chang-Diaz makes the Dem Guv field a trio. (via Twitter/@SoniaChangDiaz)

The Democratic field for governor expanded again Wednesday morning as sitting Boston Senator Sonia Chang-Diaz leapt into the fray. A stalwart of the State Senate’s left since her upset victory over an incumbent in 2008, Chang-Diaz brings the race to three major contenders. Ever looming is Attorney General Maura Healey, but the growth of the field could also begin to smoke a decision out of her.

Chang-Diaz first teased a campaign in March. More recently a chorus of young lefty activists began singing from her missalette. She launched her bid with meetings in the commonwealth’s second and third cities. A formal launch speech happened in Boston at the Jamaica Plain high school where she once taught.

“Voters didn’t send me to the State Senate to wait,” Chang-Diaz says in an announcement video. “Beacon Hill has learned three things about me. I speak up, I organize and I win.”

The Boston Democrat’s opening video mixes biography and optimism. However, it takes particular aim at the inertia of Beacon Hill including, by implication, the current governor.

“Too many leaders are more interested in keeping power than in doing something with it,” she continues.

Chang-Diaz came to the Senate after beating then-Senator Diane Wilkerson in a primary. The contest was a rematch from 2006, but the incumbent faced a corruption scandal during the second go-round.

Thus far, former Berkshire Senator Ben Downing and Harvard professor Danielle Allen have entered the race. Like Downing, Chang-Diaz will have a library of progressive legislation to pitch to Democratic primary voters. However, still being in the legislature, she has had her hand in several recent bills, too.

She spearheaded the police reform bill the legislature that became law this year. Another big bill with Chang-Diaz’s fingerprints all over it was the 2019 education funding reform. Until the election of Springfield Senator Adam Gomez, she was also the Senate’s only person of color.

While the upper house of the Massachusetts legislature has long been more critical of Governor Charlie Baker—in word, if not always in deed—Chang-Diaz has been especially vocal. Baker’s decision to seek reelection is also among the armory of swords of Damocles hanging over the 2022 election. Approval ratings notwithstanding, should he run again his record now has explicit sore spots. Chang-Diaz may be able to argue she did not wait for them to appear before needling his Excellency.

In Springfield, Chang-Diaz met with activists and representatives from some of the city’s most visible community groups at Granny’s Baker Table. The heads of Arise for Social Justice and Pioneer Valley Project attended as did local organizers with Neighbor 2 Neighbor.

Grateful to start my campaign for governor in Springfield with powerful conversations about justice and organizing with @AdamGomezMA, @JLLederman, and community leaders at Granny's Baking Table! pic.twitter.com/SRz16siRo2

Sources say organizers of Wednesday meeting in Springfield planned the roundtable without any knowledge of the senator’s campaign launch.

Speaking to WMP&I, Gomez too said the meeting was arranged independent of any campaign announcement. He said he was not endorsing any candidate for governor at this time, though Gomez has worked with Chang-Diaz on issues of mutual interest dating to his time on the City Council. Still, it was an opportunity for his colleague to hear directly from activists in Springfield.

In a text, Lederman, who also chairs the Democratic City Committee, also stopped short of any endorsement. However, he was “glad” to be part of the roundtable and to hear the senator’s vision for the commonwealth.

“We need a Governor who shares the experiences of the people of Springfield and who will work together with local residents and leaders,” he said. “The strong field of Democratic candidates developing is a good sign for 2022.”

After her stop in Springfield, Chang-Diaz met with striking workers at St. Vincent’s Hospital in Worcester. Before her announcement in Boston, she toured businesses with Woo-town State Rep Mary Keefe.