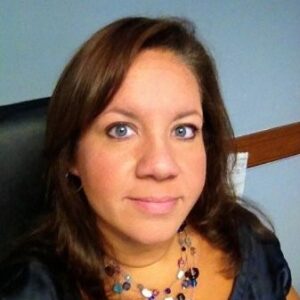 Oyola ready to clerk it! (via LinkedIn)

SPRINGFIELD—Gladys Oyola, the head of the Springfield Election Commission, will be the next City Clerk after the City Council unanimously selected her. Last week, a search committee had slimmed down a field of 72 applicants down to three. On Monday, Oyola, an unsurprising though eminently qualified choice, prevailed.

Oyola’s election came after Mayor Domenic Sarno again injected himself into a Clerk selection process. More than just “nominating” her, which the mayor has no power to do but nonetheless did in 2019 and 2015, he promised to elevate and expand the Clerk’s position in legally unclear ways. Still, Oyola’s experience and record in the Elections office should leave residents confident of her qualifications and abilities to serve as City Clerk. She will also be the first Latina to run the Clerk’s office.

“I wanted to thank all 13 city councilors for taking the time to sit and talk with all of us,” Oyola said in very brief remarks before the Council adjourned to start its regular meeting Monday. She expressed a desire to meet with councilors soon to discuss improvements in the Clerk’s office.

The office of the Clerk became vacant last month after Tasheena Davis resigned to return to the Law Department.

The city charter clearly gives the Council sole power to choose the Clerk. A 1998 change in the city charter lengthened the clerk term to six years starting in 2004. However, the Council’s legal advisor, Attorney Thomas Moore, said the ambiguity in that law suggests a new six-year will begin once the clerk-designate takes office. Oyola will not be completing a term that would have began in 2016.

In choosing Oyola, the Council passed over Christopher Lizotte, a veterans and military affairs coordinator with MassBay Community College, and Rosa Jones, a supervisor with the Georgia workers’ compensation board. Both had impressive resumes and appeared virtually alongside Oyola to pitch themselves to the Council.

Winning the day were Oyola’s years of service leading the Election Commissioner and before that as a bilingual election coordinator. Prior to working in City Hall, she was chief of staff to then-rep Cheryl Coakley-Rivera.

Yet, the meeting was riven with concerns about salary and responsibilities.

Councilors noted that the advertised salary for the Clerk position was roughly $93,000. That is $7,000 less than the starting salary of the prior two clerks, Anthony Wilson and Davis. Both left the office making slightly more. While compensation is not in the Council’s purview, this inequity stood out.

A related concern were additional responsibilities the Clerk could have. Ward 2 Councilor Michael Fenton, who chaired the selection subcommittee, said the mayor’s office confirmed that Oyola was the only Clerk candidates who would receive the additional oversight the mayor had outlined.

In his press release announcing his preference for Oyola, Sarno said she would also oversee both the Elections Office and 311, a municipal helpline. The mayor added that she would be in his cabinet, but this has no legal or administrative significance.

All Clerk candidates promised to balance the competing loyalties the job necessarily entails. The Clerk reports to the City Council, but it is also a department head that works with the mayor. For her part, Oyola noted that as Election Commissioner, the mayor appoints her, however she has another superior. She works under the state’s top election officer, Secretary of State Bill Galvin.

“I think I would operate in a similar fashion,” she said of serving the Council and the executive branch.

While the mayor’s office confirmed to Fenton that only Oyola would, if named Clerk, oversee Elections and 311, it did not offer any explanation about how this arrangement would work. A spokesperson for the mayor did not respond to a request for clarification.

For her part, Oyola suggested that she would seek an election deputy so she could still run the Clerk’s office. She likened it to the situation in smaller cities like Holyoke and Lawrence. In those cities and other, city clerks formally runs elections, but hires staff during the electoral seasons. 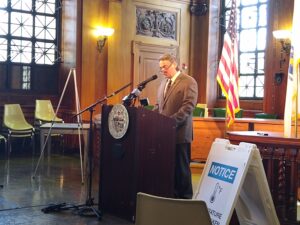 The mayor against asserts a unitary executive, this time without explaining how it even works. (WMP&I)

As a practical matter, the Clerk’s office already provides administrative support to the Election Commission. Oyola herself carries the title of Deputy City Clerk now. However, the mayor’s announcement implies something new without explaining how it squares with the 1949 law that created the Springfield Board of Election Commissioners, the formal name of her agency.

That year, as part of a trend in larger cities, the Massachusetts legislature abolished the Springfield Board of Registrars of Voters. Normally, such boards are default in the commonwealth’s cities and towns. They make balloting decisions and settle disputes about ballots and signatures, alongside that city or town’s clerk.

Springfield’s Board of Election Commissioners, however, is essentially independent of the Clerk’s office. The 1949 law removes all election responsibilities from the City Clerk, City Council, mayor and the defunct Board of Registrars. The sole exception is setting polling places and hours, which the Council still controls.

While councilors acknowledged doubts, they emphasized their sole duty was picking a clerk.

“We narrowed our scope to just filling the City Clerk’s position,” Fenton said of his subcommittee’s process.

The clerk “will be leaned on extremely hard to do whatever it is that the mayor wants them to do,” he observed.

Ward 6 Councilor Victor Davila queried Attorney Moore what would happen if the mayor moved Elections and 311 out from under the clerk. Moore said the Clerk would then simply be a Clerk.

The only moment of drama came on the vote to proceed. With public speak-out beginning immediately after the Clerk vote, some councilors still had questions.

“It’s been a couple of times when HR has not attended a couple of meetings where their voice and their education is needed,” she said.