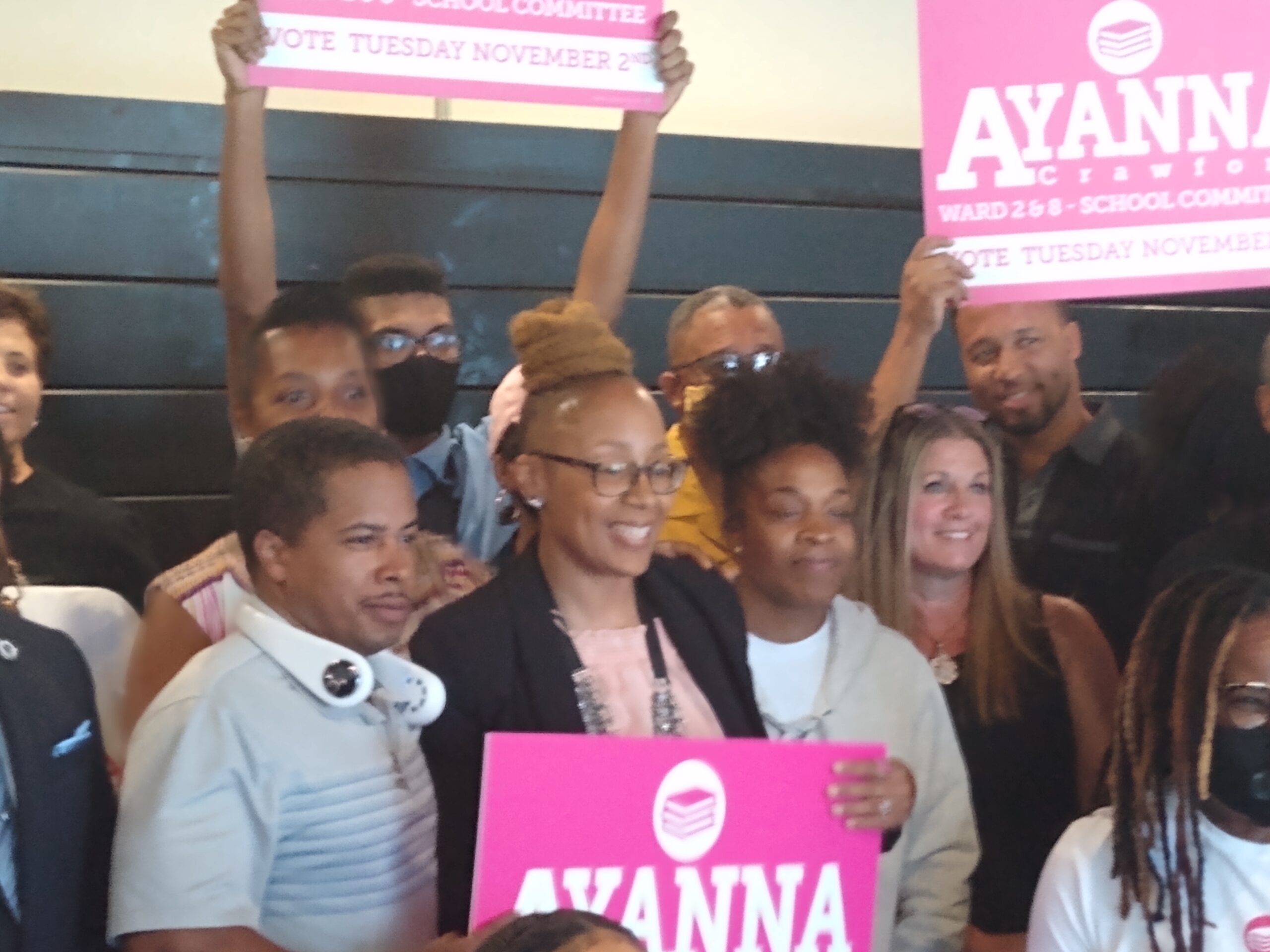 SPRINGFIELD—The only contested School Committee district race here began in earnest Wednesday night with Ayanna Crawford formally launching her bid. She seeks the seat that covers Wards 2 and 8, but in doing so she is challenging incumbent Peter Murphy who has weathered many a challenger emerging victorious each time.

The School Committee only comes up for reelection every four years during the midterms—the mayor is not on the ballot this year. The subsequent lower turnout makes upsets more numerically plausible but perhaps more difficult politically.

With in-person campaigning returning, Crawford drew an energetic and representative if not overflow crowd to Palate restaurant on Boston Road.

“I want to make sure that we keep the fun in the committee, in our schools, and that we’re making sure that our children have the best quality education,” Crawford said.

Officially, Crawford is seeking the District 4 seat on the Committee. Per the city charter, this seat consists of Wards 2 and 8. Earlier in the petitioning process, there was interest in the other seats, but that petered out. There are three candidates for the two at-large seats. Both incumbents are seeking reelection.

Crawford, an activist and consultant who currently serves as Rep Orlando Ramos’ legislative aide, made a passionate case for her election. Invoking her late mother and the inspiration she provided, she said one of her top priorities will be tending to the mental and psychological needs of students as the pandemic recedes.

Ramos in 2016. He said Crawford’s engagement is why he hired her as his aide and why he is supporting her.(WMP&I)

In addition to Ramos, who in his remarks cited his aide’s commitment to public service, Crawford drew political figures including community and neighborhood activists and politicians. Among the pols were Hampden Register of Deed Cheryl Caokley-Rivera and city councilors Malo Brown, Jesse Lederman and Marcus Williams, who is serving as Council President this year.

Both Crawford and her supporters noted that she herself was a product of the public schools. In addition to the importance of electing more women to public office in the city, there were critiques of the status quo. Speakers referred to teachers that do not live in the city—state law exempts most school employees from residency laws—and administrators who sent their children to private school. The latter also functions as a jab against pols.

Yet, the actual task of beating Murphy is not going to be easy. Although Zaida Govan is now a leviathan in the race to succeed Ramos as Ward 8’s city councilor, Murphy flattened her twice in races for his school committee seat. However, Govan improved in 2017 over 2013.

In an interview, Crawford described the differences between the two wards. Ward 8 had a lot of young families. Yet, as is common for Indian Orchard and environs, they often feel left out of the city. Ward 2—or at least its most reliable electorate—are more affluent. But they both want the best for their children.

Crawford conceded the difficulty and said her focus would be meeting voters directly.

“I think my path to victory is going to be nearly the doors, being on doors, talking to the voters, telling my story, letting them know that I’ve been doing this work for millions of years that you will,” she said.

For his part, Murphy observed that voters have consistently returned him to office.

“Every time I have run for office I’ve had an opponent,” he said in an email. “I’ve always run a positive campaign and I look forward to the competition this November.

Murphy added that dialogue about the city’s future generations was incredibly important. Like many residents, has a very personal stake.

“As a parent with children in the Springfield Public Schools I believe a in a high quality, safe and well rounded education for all of our children,” he continued.

Indeed, this is a key difference between Murphy and many others of the fading Hibernian hue of East Springfield. Crawford supporters who serve with Murphy, like at-large School Committee member LaTonia Naylor, acknowledged this.

“I do respect what Peter does and I know that he has children in the district, and he’s done a very good job of trying to support and be a voice for them,’ Naylor said.

However, echoing electric remarks she gave on Crawford’s behalf, Naylor said when she first ran in 2017, Crawford was in her corner. She added that Crawford also would be a great asset the Committee tries to deliver education equitably across the city.

As for the complication of low turnout, Naylor pointed to elevated parent engagement during the pandemic. That could lead to more voters at the polls.

“I think it will translate into more folks being engaged because people are paying attention,” she said.

On a baser level, this contest and others this year reflect some brewing tension among the city’s factions. A louder, more activist contingent has been clashing more with the more cautious sometimes reform-skeptic crowd and vice-versa. With the mayor not on the ballot, the pandemic is still muting the most vigorous clashes with him. The little glue that held these pieces together in an anti-Sarno posture has flagged.

No candidate is openly running on these schisms. Most would avoid any acknowledgment of them. However, they are there. It remains to be seen how prominent it will be in this race. For now, neither Crawford nor Murphy are in any rush to let it go there. 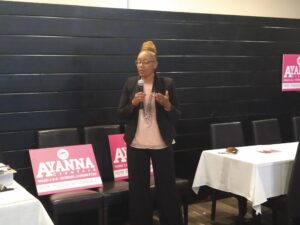 Earlier, Coakley-Rivera observed it was important that women, especially women of color like Crawford, run for office themselves and not just carry somebody else’s sign. As her remarks wound down, Crawford appeared to allude to that in her own way.

“I’m excited about this election. I’m excited that women like me, can take a risk and stand up,” she said. Crawford recalled a conversation about how a decade ago when she declined to seek office. That person she was speaking to said she didn’t run before because she was scared. She is not now.

“I’m ready and so I want you all to know that I’m here to listen, to hear, and to collaborate, and to celebrate how we’re going to move forward with our children, our parents and our community, we need to all stand up for them,” she said.