How Elizabeth Warren Goes Local in the Commonwealth… 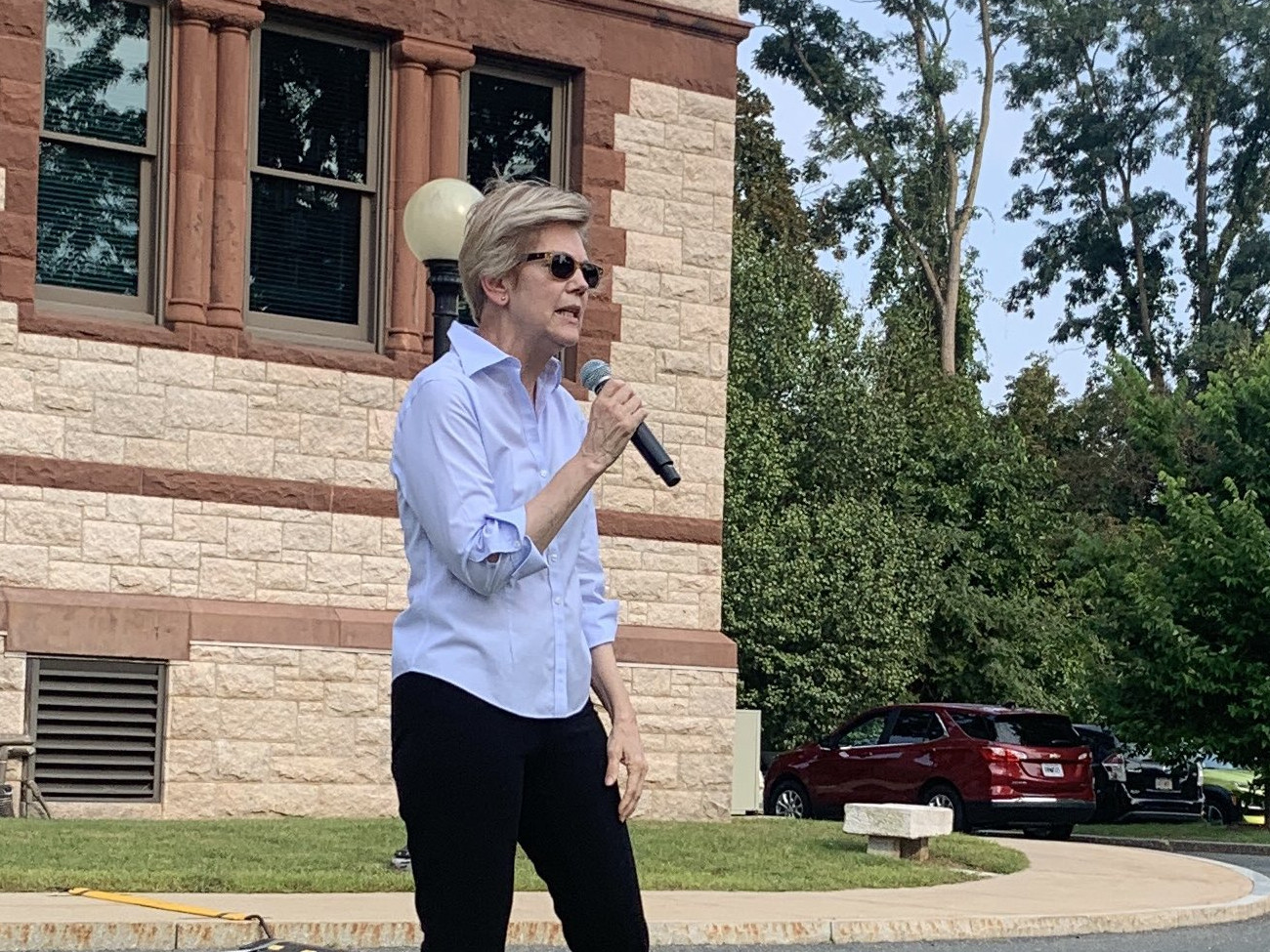 Elizabeth Warren ready to rock out in Noho. (via Twitter/@jentaub)

Two weeks ago, US Senator Elizabeth Warren’s town halls returned to Western Massachusetts. A crowd spread itself on a lawn outside Northampton’s Forbes Library as the senator gamely answered questions. Warren has been in the region during the pandemic, but public health conditions had made her (usually indoor) Q&A’s a coronavirus no-no. There were protesters across the street, but the seated masses were thrilled to have her back in town.

Warren’s visits also offer a chance for local officials to get some (mostly masked) facetime with the commonwealth’s senior senator. Warren’s nod is a sought-after endorsement in the Bay State, which means she must tread lightly when it comes to local politics. However, catching up in person has value for her, too. That helps her put Washington’s impact into context back home.

“It’s really important,” she said in an interview a few days after her Northampton visit.  “I count on local officials to help me know the best design for the programs we’re trying to do in Washington.”

The timing of Warren’s visit to Paradise City overlapped with heated local elections for mayor in the region. Both Northampton and Holyoke will be electing new mayors to say nothing of the panoply of council and school committee races. She is paying attention to local contests, but cautiously.

Warren spoke to WMP&I via phone about her visit to Western Mass, working with local officials and her approach to local politics. A pandemic and three campaigns had not dimmed the folksy conviviality that catapulted a law professor unknown outside her field into the US Senate from a state that often favors familiarity in politics. National media discounted this back then and ever since. Once this was divorced from her identity, it was easy for frankly sexist portrayals of her style and pitch to follow.

But perhaps her enthusiasm was due to the subject matter.

Warren eagerly talked up the value of working with local leaders. Northampton provided an especially friendly audience. On the day of her town hall—as local pols elsewhere do when she visits—Noho grandees happily posted pictures from a meeting with her inside Forbes Library.

Throughout the pandemic, the senator said she has been zooming with officials across the commonwealth. From them she can get the skinny on what people need, whether universal or esoteric.

“Most of the local officials know I’m a complete nerd,” she said. “So, when I show up and we have the one-on-ones, when we have the opportunity to meet face to face, many times they’ll bring one or two issues that are very urgent for them”

Warren said these relationships were especially important in the early days of the pandemic or on subjects like childcare. Maintaining childcare services even in a state as small as geographically small as Massachusetts is a different beast in different places. The local input about the variance of challenges is especially helpful.

On coronavirus relief, she said that the impact of local conversations was vast. Warren spoke with state legislators, mayors and councilors about what the state and municipalities required in COVID funds and rules on how to spend them.

“Back in the early stages of the COVID crisis and Washington was trying to get money out the door, we were working together from collapsing and to keep the entire economy from cratering,” she said. 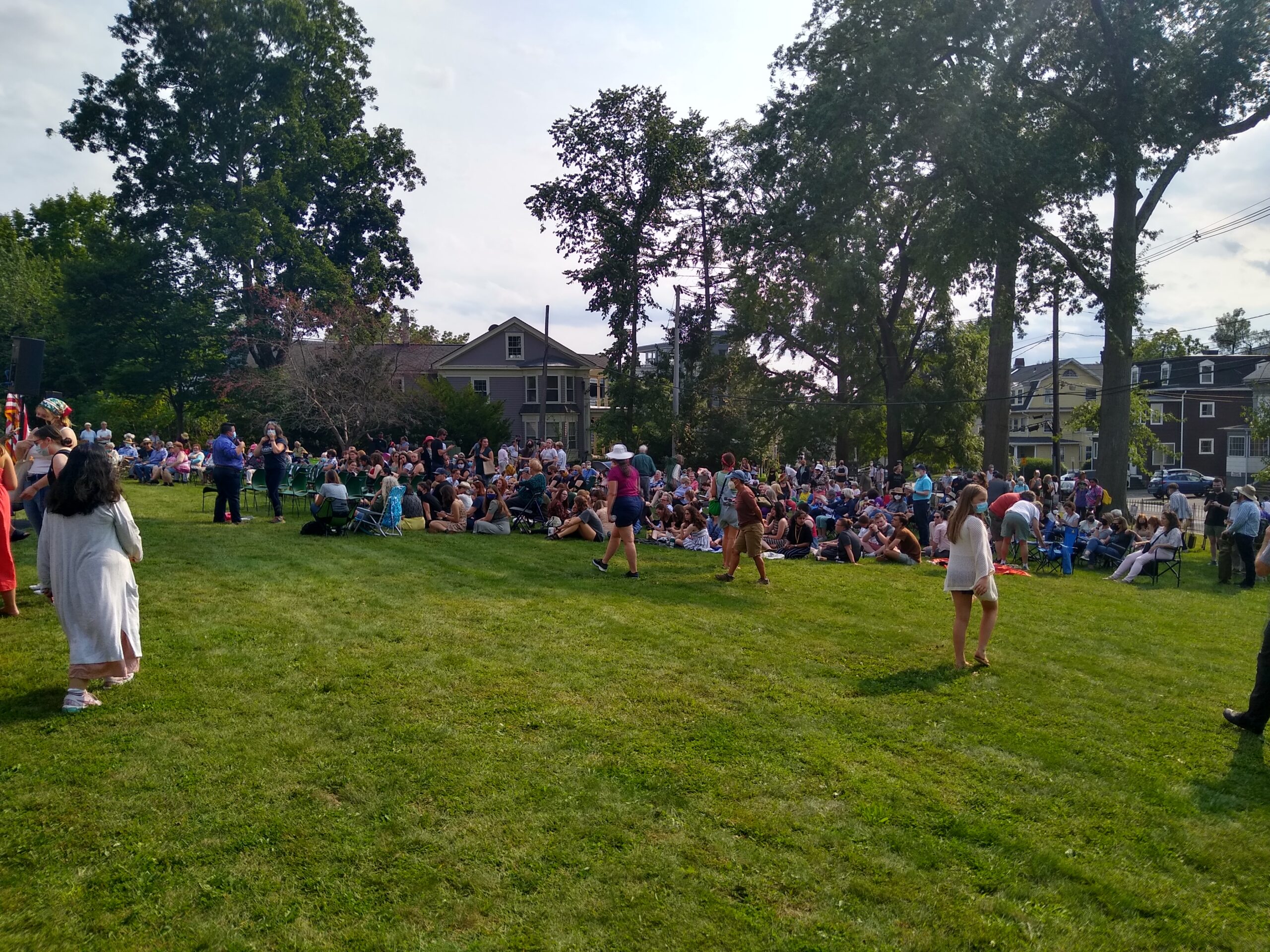 The assembling crowd for Warren earlier this month in Noho. (WMP&I)

Those early conversations evolved toward a central request: flexibility. Over successive coronavirus relief bills, communities faced fewer and fewer restrictions. This was essential when, Warren said, the needs of Chelsea and Northampton could be so divergent.

Policy is not the only local angle, however. Where somebody as high-profile is concerned, even in her own state, politics is in play.

Warren admitted she was watching some of the races in the 413, but she would not identity which ones. She said tries not to involve herself in local races too much. The senator said she has to work with everybody in local office. To ensure that happens, she wants challengers and contenders to have their voices heard.

A notable exception has been Warren’s support for Boston City Councilor Michelle Wu in the Hub’s mayoral contest. As she had during Wu’s first bid for City Council there in 2013, Warren has campaigned for Wu vigorously. Warren said this was an exception and an important one.

Wu worked on Warren’s campaign and was a student of the senator’s at Harvard Law. Warren also cited her support for Wu when the now-councilor had to manage a health crisis her mother was going through.

“I have worked with Michelle for 12 years and she’s family and you show up for family,” Warren said.

While she may be watching the region’s elections, Warren’s town halls are about who shows up. She was happy about the breadth of the questions, ever unscripted, which highlighted the key issues. Climate change, child and health care and college costs all made appearances in audience questions.

All told Warren read it as an encouragement to keep up the fight.

“I had this overwhelming sense that pretty much everyone in the group got it,” Warren said of the Northampton crowd. “They know the decision made the next few weeks can set the course in this country for generations for come.”