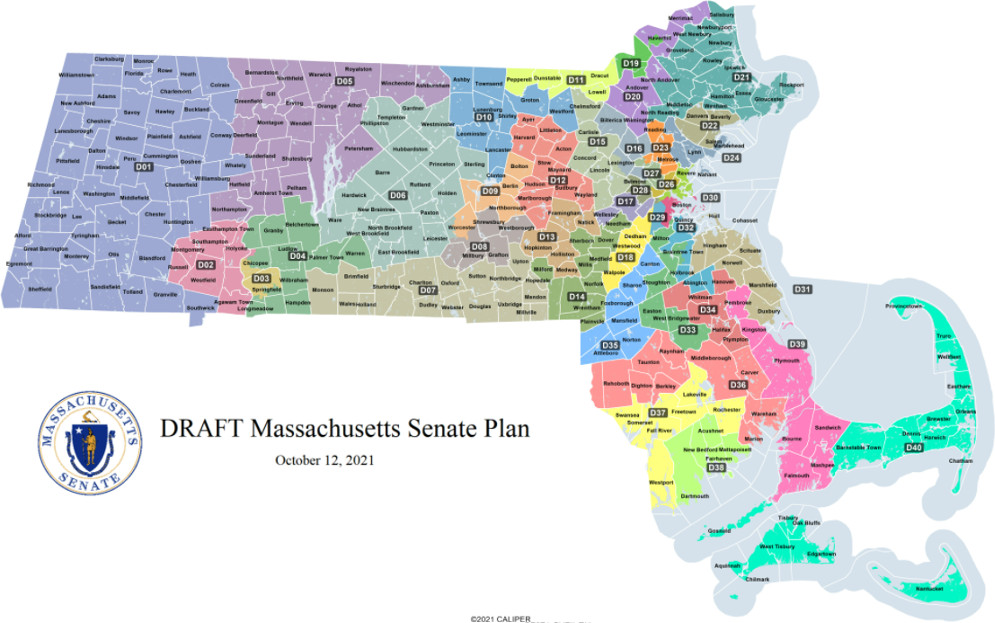 And the redistricting lord(s) said “let there be maps…” (via malegislature.gov) 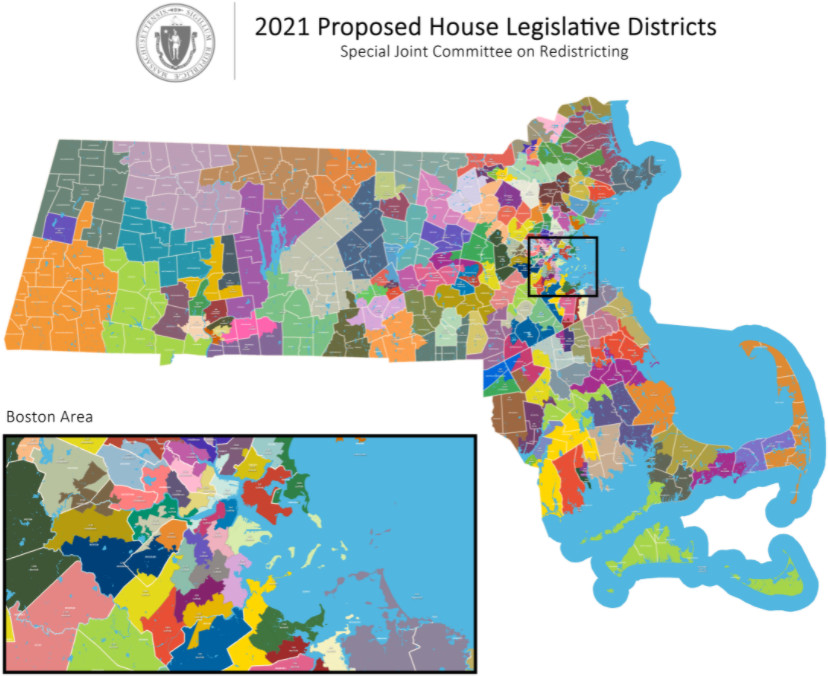 …and there were maps! (via malegislature.gov)

With the much-delayed Census figures in hand, the Massachusetts legislature set to drawing new maps for the state House and Senate. On Tuesday, the Joint Committee on Redistricting released its drafts. The new lines are not wholly without controversy. The Committee will hear from the public Friday even as a constitutional deadline begins to bear down.

In the 413, the process may have delivered as well as it could. With population declining or otherwise not keeping pace with the commonwealth overall, losses in representation became inevitable. Political shifts may have paved over some issues. Other challenges seemingly came to resolution. Diverse districts endure under the proposed maps and the broader region’s overall losses is a rep seat.

Time is against mapmakers, at least on the House side. The state constitution mandates a year of district residency prior to election. Election Day in 2022 is November 8. That deadline and the lateness of Census data led the legislature to controversially redraw maps before localities redrew precinct lines.

Senators have less rigid residency requirements. Congressman, whose maps were not released Tuesday, must only live in the state.

In Springfield, the tendrils of city House districts swing around, but not dramatically. The city would still have four Springfield-heavy seats, but only one suburban district, instead of the current two, reaching into the city. Holyoke and Westfield, once perfectly sized to their own house districts must reach out to neighboring communities to fill a rep district.

On the State Senate side, the Berkshire-based Senate district reaches further east, changing other Senate districts to the east. This shifted West Springfield from the Springfield-anchored Hampden District into the same district as Holyoke and Westfield. That will preserve the minority-majority district Senator Adam Gomez holds, which was a top priority of advocates.

Cruz said N2N, an organizing and action group whose focus is communities of color, will need time to fully digest the maps. Still, he appreciated mapmakers’ task. “We had a hard time doing it,” he said of drawing the maps N2N submitted for consideration.

In an interview, Gomez said he was looking to community input but he praised the work of the Redistricting Committee’s chairmen. Watertown Senator William Brownsberger and Boston Rep Michael Moran. 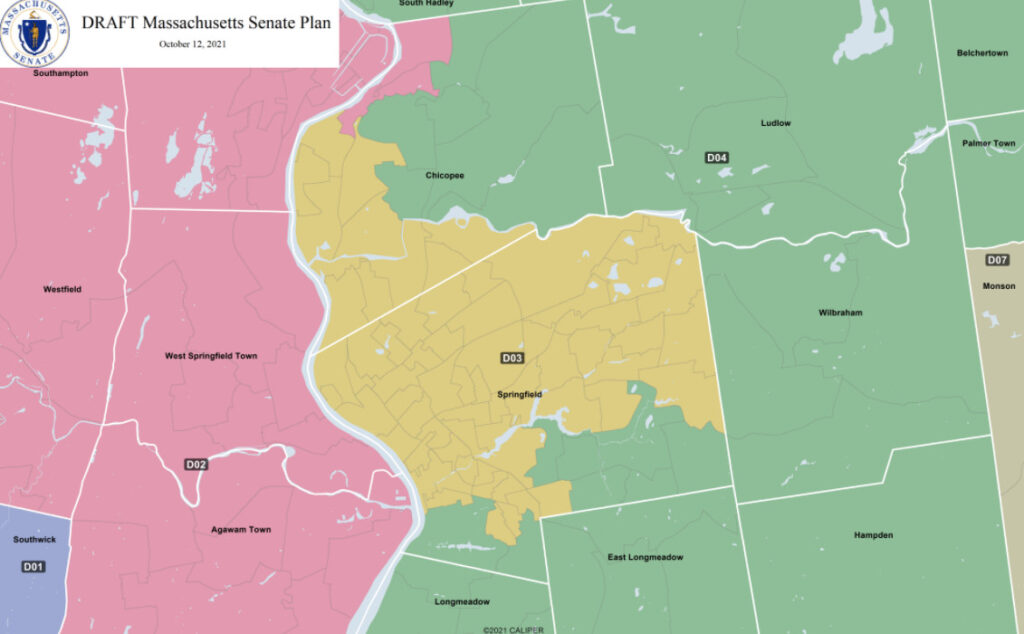 “Both chairmen did a really great job making sure that they kept communities as whole as possible,” Gomez said.

While wistful about likely losing West Springfield, Gomez said he would be happy to represent more of Chicopee and Springfield. Gomez said successful minority districts in turn has helped bolster turnout among these populations and make candidates for other offices more viable. He pointed to the election of Hampden Register of Deeds Cheryl Coakley-Rivera as an example.

“Hopefully expanding the VOTES Act will be moving the needle as well,” he said referring to legislation to ease voting that the Senate passed last week.

Northampton Senator Jo Comerford, whose sprawling district would crane itself deeper into Worcester County concurred about the importance of preserving the region’s Senate representation. This was a key priority that transcended any one senator’s interests.

Comerford added that she and her Western colleagues also had to disentangle and explain relationships on the ground level to the Committee. Regional school districts, health authorities and MassDOT regions are all factors that merit consideration.

“I do think what we’ve been able to do is a very responsible plan for the region,” Comerford added.

Gobi, also a Democrat, would surrender all but one town in the four western counties. Insert Ware jokes here as that would be the town she keeps while pressing east into Worcester. Gobi’s Hampden County charges would switch over to a new Worcester & Hampden district. Senator Ryan Fattman, a Webster Republican, represents much of the proposed district now.

One town Comerford would lose is South Hadley, which would be grafted onto Lesser’s district. He would retain Springfield’s  southerly neighborhoods. His district, tentatively renamed the Hampden, Hampshire & Worcester district, makes up loss in Chicopee and Springfield by branching out to Palmer and Warren, too.

Pushing out from the urban core while retaining footholds in Chicopee and Springfield likely preserves continuity and influence for the region’s cities in Boston. Though only first elected in 2014, Lesser is presently the most senior senator from Western Massachusetts.

A two-senator regime for Springfield had seemed less likely. Beacon Hill chin scratchers had presumed that Pittsfield Senator Adam Hinds would stay put while Lesser sought higher office in 2022. Political expediency commands that a retiring senator has less redistricting clout than one seeking reelection. By the time census data dropped, conventional wisdom on Hinds and Lesser had flipped. Lesser looks more likely to remain in the Senate while expanding his reach into the state’s interior.

The biggest House map disturbances in Western Mass came with the dismantlement of the 2nd Berkshire district. Peru Rep Paul Mark is the incumbent rep there, but The Berkshire Eagle reported last month that Mark is eyeing a run for the Berkshire Senate district. That will formally open when Hinds announces his run for lieutenant governor Wednesday. 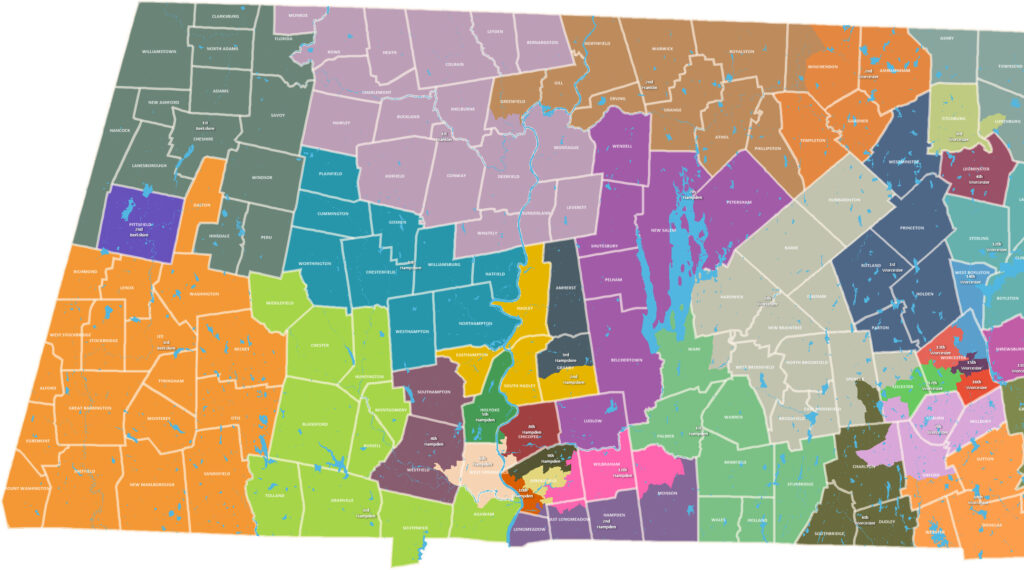 No district list here. Not gonna do it. Wouldn’t be prudent, but the old 2nd Berkshire is obliterated in this map. (via malegislature.gov)

Mark’s current district leaps from Pittsfield to Greenfield. Much of its rural space would join districts Northampton Rep Lindsay Sabadosa and Sunderland Rep Natalie Blais hold. The most conservative parts of their districts would swing to Southwick Rep Nicholas Boldyga. In a twist, ever-reddening Southwick and its western neighbors would fold into the very Democratic-friendly Berkshire Senate district.

Blais would swap Hampshire County’s western end for Franklin County’s. In an interview, Blais emphasized the importance of retaining a rural district.

“I’ve worked really hard over the last three years to really highlight to challenges that our rural communities are facing here in Western Massachusetts,” she said. “The proposed district is rural so having those communities that share those challenges makes a stronger case for investing for rural communities because they are sharing such similar challenges.”

If the map passes as proposed, Blais, a Democrat, would split Greenfield with Athol Rep Susannah Whipps, an independent. That could be an area the Committee may revisit depending on public input. Already, there is opposition to cutting the city in two.

In Hampden County, the biggest shifts are in and around bigger cities. While West Springfield Rep Mike Finn and Ludlow Rep Jake Oliveira would lose toeholds in Springfield, Longmeadow Rep Brian Ashe will recapture a slice of Springfield he lost 10 years ago.

Ashe was pleased to have his native Springfield back, but in a text acknowledged the “unenviable task” Brownsberger and Moran faced given the variation in population growth across the commonwealth. 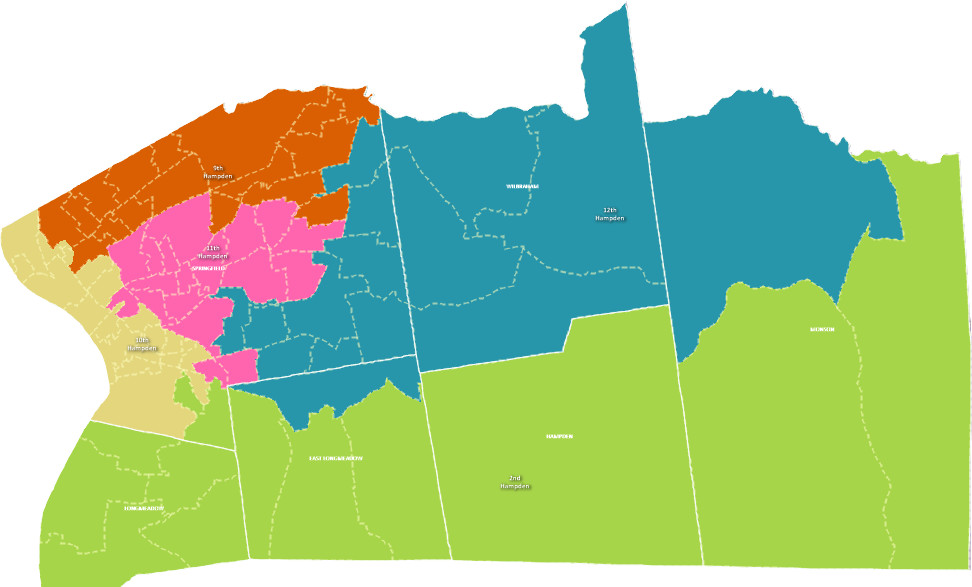 “I think the end result is fair, not only for legislators but more importantly for the constituents we serve,” he said.

Finn’s district would slip into Westfield. The Whip City has seesawed back and forth between both parties for years, but had been consistently Democratic in presidential elections until 2016. President Joe Biden won the city back—and the precinct slated for Finn’s district—last year.

Westfield shrank according to the Census meaning its House district would need to pick up even more territory to meet the mark. Mapmakers have proposed adding in Southampton, which could tilt the district somewhat leftward. Now-Senator Velis is the only Democrat to win Westfield’s rep district in the last 40 years.

Like Westfield, Holyoke needed outside territory and found it in a Chicopee precinct. Finn retains pieces of Chicopee, but the city is essentially Joe Wagner country now. Wagner, the dean of the Western Mass delegation, would slurp up Chicopee territory Oliveira represents now. Oliveira’s district will also shed Springfield, but then blossom further northward into Franklin and Hampshire counties. It may become more liberal than before.

In Springfield properly, the reconfigurations are somewhat technical. Gone is the 9th Hampden’s tentacle into 16 Acres, but it cleanly absorbs all of Rep Orlando Ramos’ Indian Orchard base. Rep Angelo Puppolo will pick up this 16 Acres territory including the Outer Belt. He would trade a few Springfield precincts with colleagues, including Ashe with whom he would also share Monson.

The Connecticut River-hugging 11th Hampden in Springfield, which Carlos Gonzalez represents, appears little changed at all. By comparison the 10th Hampden, a historically Black district, would lose its shuriken shape but grow a few more nodules into western 16 Acres and Forest Park.

Those interviewed emphasized that there is still time for public input. The Redistricting Committee is holding a public hearing on Friday at 12:30pm.

Out east, there is already some consternation brewing. For example, Haverhill Rep Andy Vargas, who is running for State Senate, slammed the new maps for splitting his city in half in what he implied had garbled an attempt to actually boost minority representation.

“While I understand the challenges that come with redistricting, it is unacceptable to cut the heart out of Haverhill and segregate the most diverse precincts from the rest of the city,” he said in a statement. The proposed maps he said hew too closely to what he characterized as a “gerrymandered district” while leaving his city a “minority stakeholder” in two senate districts.

My statement on the proposed redistricting map. pic.twitter.com/7l220sanWg

Objections like this have not come in Western Mass or at least not yet. Some would-be cartographers are thinking ahead, though. Cruz, the N2N regional coordinator, said the maps laid out now could shape the future if policies like East-West rail come to be. That would bring huge change as expanded service to Worcester has.

“The question is how. That’s our main issue when looking at redistricting,” he said of the matter. “It could be anything, so we want to make sure that we’re looking ahead.”

New districts mean transition, too. Senator Comerford observed that the Western Massachusetts delegation “punches above its weight” and that was certain to continue.

She thanked Gobi, her colleague and the Redistricting Committee’s Senate Vice-chair, for prioritizing the preservation of Western Mass seats. Towns like Athol and Ashburnham will move over to Comerford’s district. Comerford said she and her team would be working with Gobi to learn more about them.

The maps have not been chiseled into stone tablets yet. Still, Comerford acknowledged the likelihood of losing Colrain, South Hadley and Whately.

“There is absolutely loss in this map, for me personally,” she said, pointing to the relationships with residents, officials and their issues. She described a recent, successful example of working on a South Hadley education issue with Rep Dan Carey, whose district includes the town

“There’s no joy in letting these communities whatsoever,” she said.

Blais said that she will miss representing the Hampshire County Hilltowns. Yet, she, too, was confident about the strength of the region’s delegation.

“We always expect changes with redistricting, but this year we saw more changes because of the loss of population in Franklin and Berkshire [counties],” she said.

That loss, Blais added, only highlights the urgency of state action on education, transportation and economic development in Western Massachusetts and especially its rural spaces. If that does not happen, next time the representational losses could be worse.

“I don’t want to be sitting here in 10 years having done nothing to reverse those trends,” she said.