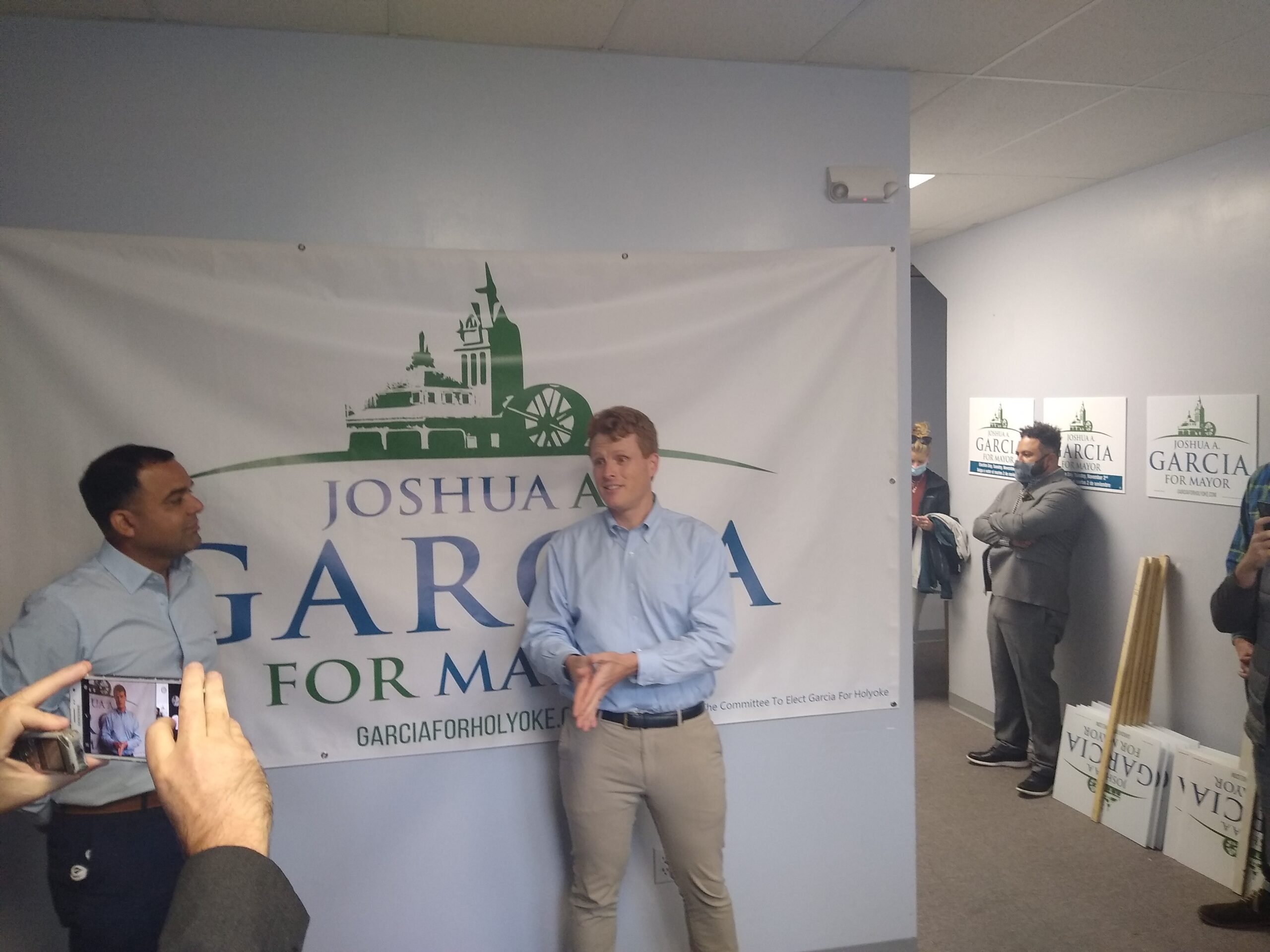 Kennedy back on the Western Mass campaign trail–for others now. (WMP&I)

HOLYOKE—A bit of polite feistiness has joined the campaign trail here as the mayoral campaign winds down. Blandford Town Administrator Joshua Garcia and at-large City Councilor Michael Sullivan have jousted in three debates thus far. A fourth scheduled for Thursday. On Wednesday, Garcia got an endorsement from former US Representative Joseph Kennedy, III. The former Newton congressman joined the candidate in a push to bring out early votes.

Kennedy, who won Holyoke in last year’s Democratic Senate primary even as Ed Markey won the state, could nudge a few truly undecided voters Garcia’s way. More importantly, it brings a bit of attention to the campaign, which will remains crucial in the last week. Sullivan, who is not the former mayor, has played the post-preliminary leg of the race extremely carefully. Garcia has been more active but events with Kennedy can help.

Garcia expressed gratitude for Kennedy’s endorsement. Though he acknowledged their differences—Garcia grew up poor in South Holyoke, Kennedy is well, a Kennedy—the candidate noted they share an urge to help out.

“Although Joe and I has lived very different lives,” he said, “that’s where our values remain the same, doing what we can to take care of our neighbors and that means lending a helping hand, and lifting up.”

Kennedy’s remarks were a clear allusion to the message Garcia has been trying to send throughout the campaign. In debates such as the one the League of Women Voters and Daily Hampshire Gazette organized and Holyoke Media streamed Tuesday, Garcia has leaned heavily on his resume. However, he did acknowledge the Holyoke history he would make as its first mayor of Puerto Rican heritage.

Sullivan, echoing complaints of Garcia critics online, claimed that the comparison between Blandford and Holyoke was weak. The critique arose after Garcia noted the financial troubles of a business Sullivan ran more than ten years ago. (Garcia pulled back after Sullivan bristled at the suggestion the company went bankrupt, but it did face judgments in court).

Sullivan claimed the fraction of a population and budget the Hill Town has in comparison to the Paper City. Garcia parried, arguing that the same laws that govern how Blandford writes its budgets, and operates its boards govern Holyoke.

Not surprisingly, Kennedy spoke to Garcia’s background as a strength. He alluded the debate in Washington over President Biden’s agenda to improve housing, childcare and climate change. Then Kennedy noted the importance of a background managing a community and putting one’s self out there. 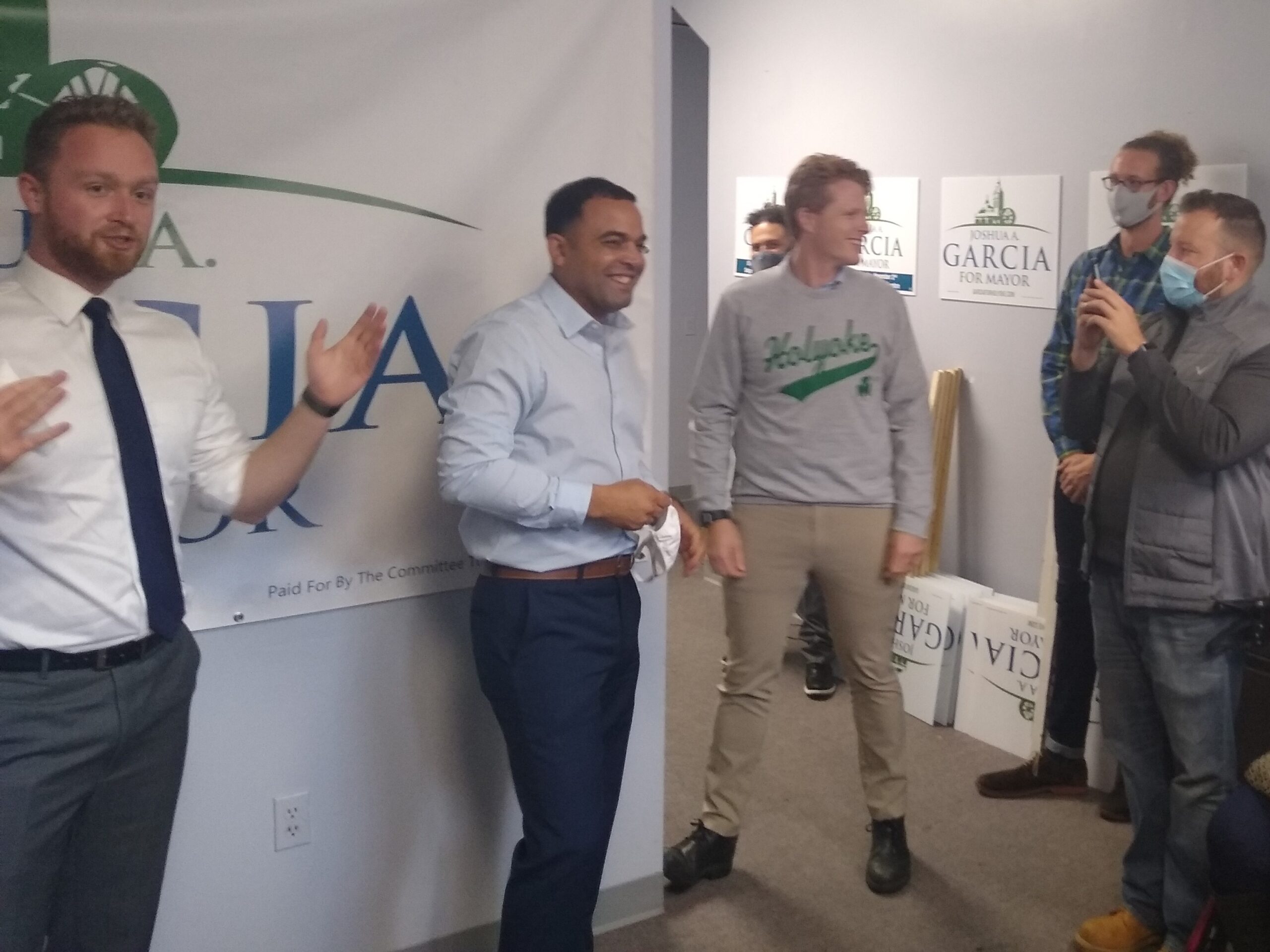 “To be willing to bridge those differences and experiences, and know that our future is shared, and sacred, and bright and brilliant,” the former congressman said. “Again, if we choose to make it so, that’s what you have in Josh is a guy that has made that choice and has put himself out there.

Kennedy appeared at Garcia’s campaign office opposite City Hall. Some the gathered audience followed Garcia and Kennedy across the street where early voting was underway.

Like many cities of its ilk, Holyoke and especially its historically Irish population were key to the Kennedy family’s victories over the years. Some jokes about being Irish from Garcia’s campaign manager would not be sufficient recognition of this legacy. Before they left the office, Garcia presented Kennedy with a thank-you gift: a Holyoke shirt complete with four-leaf clover.