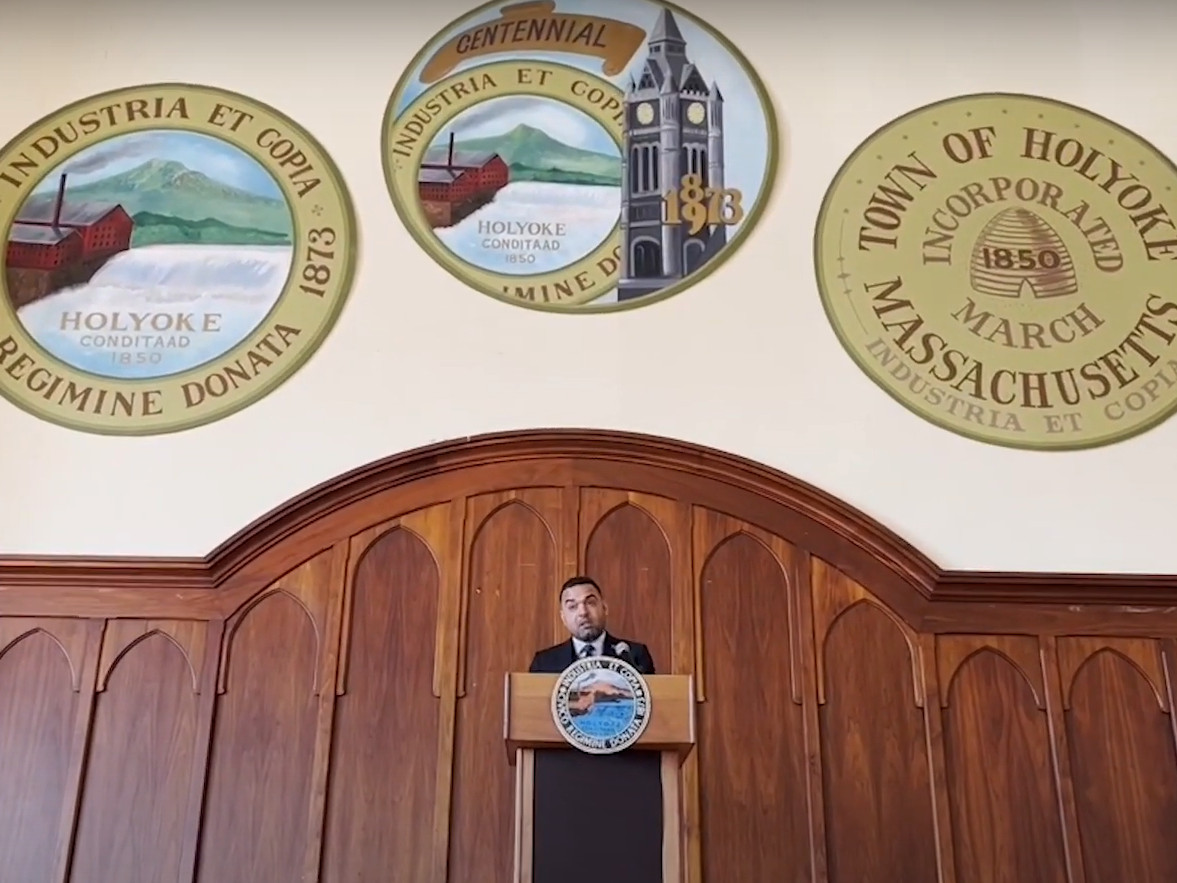 Now Garcia is the one. (still via Holyoke Media/YouTube)

Joshua Garcia, municipal maven and former town administrator of Blandford, took office Monday as mayor of Holyoke. He became the city’s first mayor of Puerto Rican heritage while adding a permanency to the office that had been missing for months. Garcia will be filling out predecessor Alex Morse’s uncompleted term until January when the new mayor’s full four-year term begins. Still, the ceremony marked a new era for the city.

Because it happened nearly two months before other officials elected alongside Garcia will take office, the ceremony was scaled down. Nevertheless, taking place in the auditorium nestled in City Hall’s upper stories, the event drew officials and luminaries from across the region. In his own remarks, Garcia remarked on the history he made but focused on the job ahead.

“So how do I feel?” Garcia said at the tail end of his inaugural speech, echoing a question many had asked of him. “I feel humbled by the challenges ahead. I feel proud to be a Holyoker and I feel ready to be your mayor.”

Garcia is not the only Massachusetts mayor elected this month to jump right into office. Lawrence Mayor Brian DePena took office last week. Boston mayor-elect Michelle Wu takes office Tuesday. They and Garcia won regular elections, but are taking office immediately due to vacancies in their cities’ mayoralties. Those cities’ charters would have ordered special elections. Due to the pandemic, these communities opted to ask the legislature cancel the specials. Rather, they used the regular election to seat new mayors.

For Holyoke, Garcia’s inauguration represented a calm after a scramble just to find an acting mayor. The City Council president declined to act as mayor. Special legislation allowed the Council to select an alternative. Ward 2 Councilor Terence Murphy had acted as mayor since April.

Monday morning, an exuberant Garcia, looking a touch older than a 35 year-old Millennial and decked out in a blue tie and stripped vest beneath a dark suit, entered the auditorium with his wife, children and mother. Holyoke District Court First Justice William Hadley administered the oath shortly after 930am.

In his first remarks as mayor, Garcia started with the prosaic. That, however, was exactly what he had promised on the trail.

“Over the last 13 days, my team and I have hit the ground running to execute on my campaign promise of identifying the inefficiencies in our government and strengthen internal controls so we can better connect, build and grow together,” he said.

However, he also laid out the city’s possibilities built on the diversity of Holyoke. Garcia teased a transition announcements and goals including extracting city schools from state control.

“Once we establish a strong foundation at city hall first, we can expect to build a future where financial stability allows for investments for these very important quality of life decisions,” he continued. “For too long we’ve made short-sighted decisions that hurst us in the long term and folks, that ends today.”

One of Garcia’s first tasks shall be tackling the budget for next year. There will be other tasks to address before year’s end when the current council expires. A bevy of putative Garcia allies will join the municipal legislature then.

Appointments and stability in City Hall are another key task for Garcia. Murphy said at his farewell press conference last week that improved in many city offices in recent months. Yet, several departments still await permanent appointments from an elected mayor. The short turnaround from election to inauguration has limited the amount of transition that could occur by this point.

In a ceremony this morning in the City Hall Auditorium, Joshua Garcia was sworn in as Mayor of Holyoke. Mayor Garcia will serve the remainder of the current term and be sworn in again with all other elected officials at the January 3rd inauguration. pic.twitter.com/5RC459rQmM

“I was honored to be asked to chair, as well as honored to be in such great company with this team,” Vega said in a statement from Garcia’s office. “I know we are all excited to get to work and provide the Mayor with advice, ideas and guidance.”

The mayor said in his statement he reached across the spectrum of Holyoke government, business and community for his transition.

“I know that I cannot do this myself and so I’m proud to announce this esteemed team of leaders in business, education, government, economic and workforce development, public safety, housing and community building. I’m so grateful that they have all been willing to step up and help me and — more importantly — help Holyoke,” he said.

Garcia is expected to announce other panels to advise him as his administration ramps up. However, the transition committee will need time to make additional recommendations. Staffing announcements and other changes related to the transition could still be some days and weeks away.