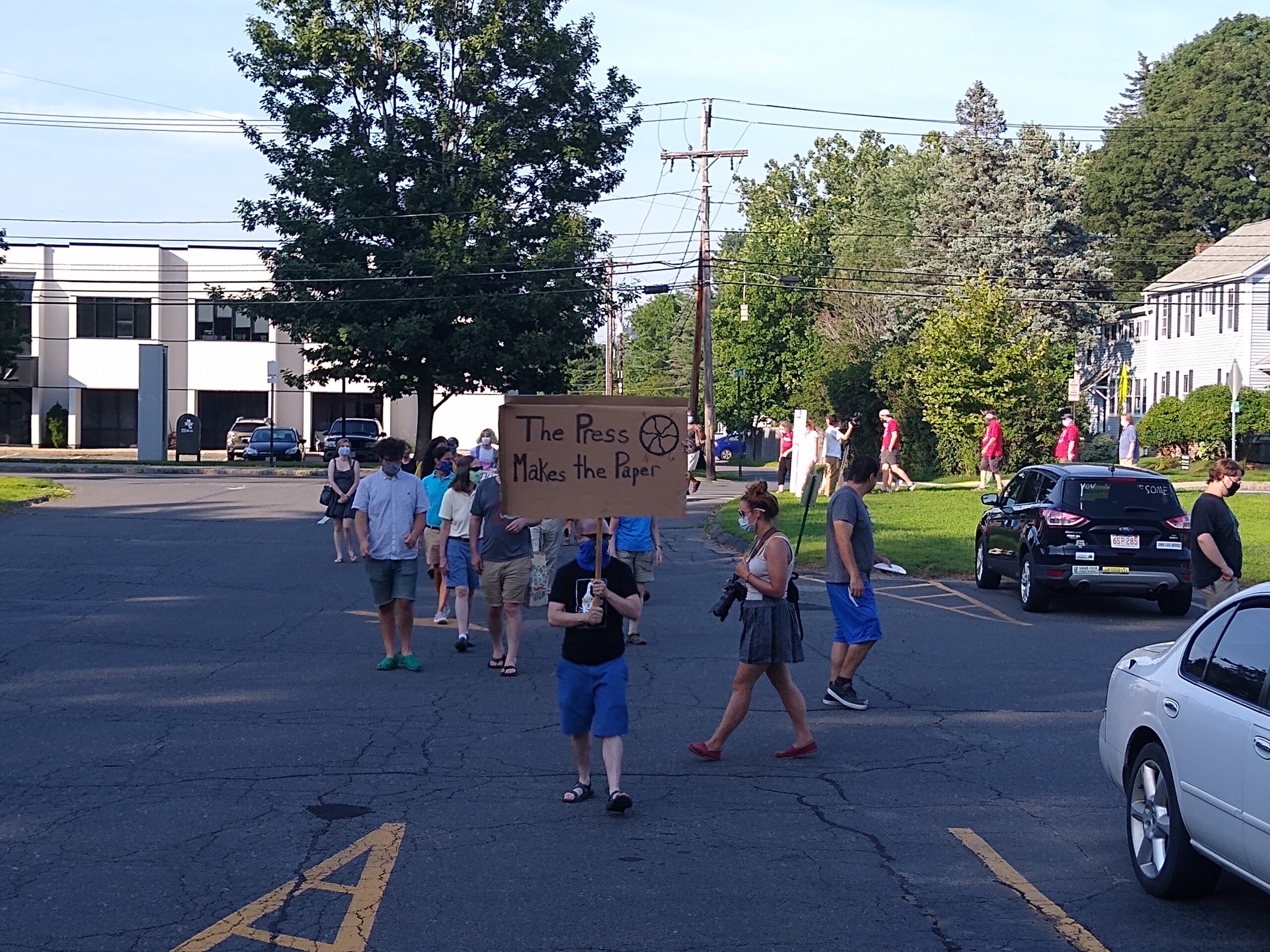 “Hey-hey, ho-ho, work without a contract has got to go!” And it finally has after three years and the printing plant’s closure.  (WMP&I)

A local battle in the crackling labor movement within journalism came to a close on Monday. The Pioneer Valley NewsGuild, which represents employees at the Daily Hampshire Gazette, announced their members had unanimously ratified an agreement with the paper. It is the first contract since the staff there voted to join a subunit of the NewsGuild-CWA in 2018. Therefore, it is also the first in the paper’s 235-year history.

Job security and conditions spurred employees of the Northampton-based publication to seek union representation. A wall-to-wall bargaining unit formed, covering the newsroom, support staff and press room. Membership suffered a blow after the paper outsourced printing to another company. Staff reductions and uncertainty followed as the pandemic bit down on local media. The accord was clearly welcome.

“I am so proud of what we have accomplished as a union and am excited to see what the future brings for us and the newspaper we love,” said Bera Dunau, the Pioneer Valley NewsGuild’s unit council chair and a Gazette staff writer, in a guild statement.

The contract begins next month and expires in January 2024.

For years, newspapers and digital print publications nationwide have seen a swell in union interest among staff. Both the national NewsGuild or other labor organizations have been organizing both local and national newsrooms. While classic worker concerns have underpinned these union drives, the survival of local news itself has been a central issue. Indeed, the survival of the Gazette itself was never far from the conversation in the Valley.

The Gazette contract comes after weeks of rising tensions between the union and the paper’s owners, New Hampshire-based Newspapers of New England. This fall, the union began a work-to-rule action, whereby staffers would only work to the letter of their job descriptions.

In November, the union announced a byline strike which the paper refused to honor. Shortly thereafter, community columnists including Northampton legislators Senator Jo Comerford and Rep Lindsay Sabadosa discontinued contributions in solidarity. During this time, pickets outside the Gazette’s Conz Street offices in Northampton resumed.

Even so, the union has held forums about how to support local news and the Gazette in particular. 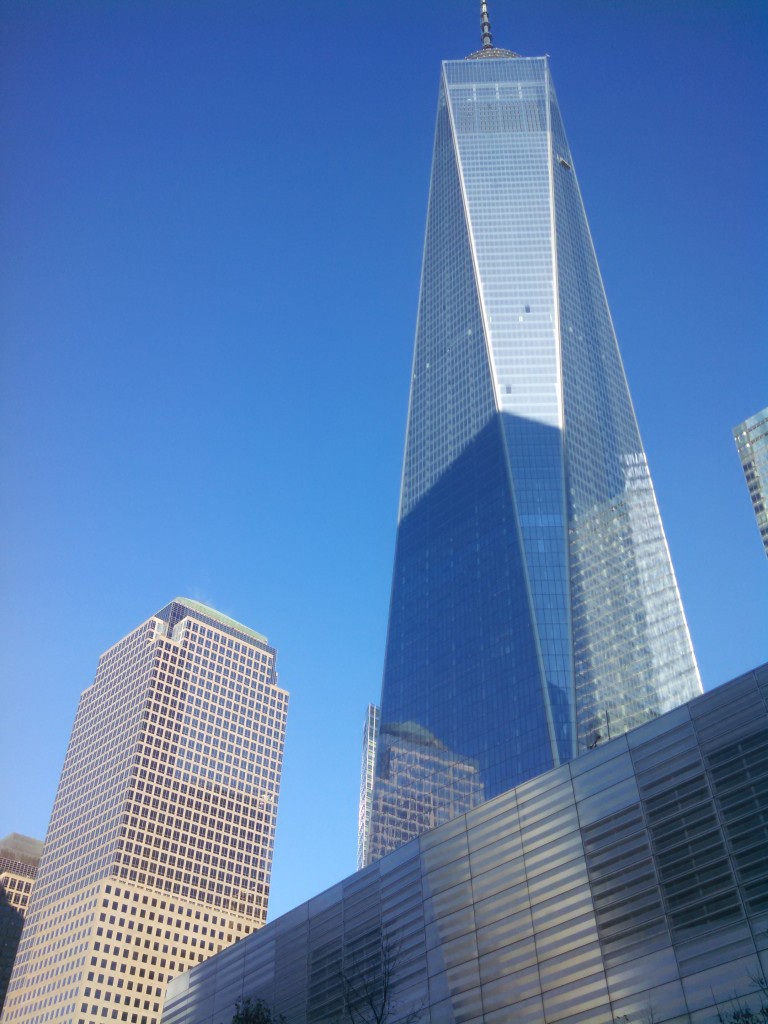 Valley media chin-scratchers though a strike or lockout would result in NNE falling back on The Recorder in Greenfield. That paper is not unionized. But turning it into a Gazette doppelganger would take time and could be an unfair labor practice, incurring the wrath of the National Labor Relations Board. It is not clear the paper could survive the ordeal, leaving any victory pyrrhic.

Tensions were sufficiently high that competitors had begun gaming out what might happen if the two sides reached impasse. Advance Publications, owner of The Republican and Reminder Publications, which produces weekly zoned papers from Springfield to Northampton, eyed how quickly it could leap into any sudden Gazette void.

In the end, NNE was no more interested in crossing that abyss than the union might be.

Shawn Palmer, who became the Gazette’s publisher in January, said in a statement moving beyond the labor strife had been a priority.

“Since joining the Gazette in January I have been focused on reaching an agreement with the NewsGuild,” he said in a statement to WMP&I. “I am very happy that we have come to terms and I look forward to a year of growth for the Gazette in 2022,” Palmer continued.

If the pact came together through negotiation and pressure, the vote was an enthusiastic affirmation of its terms. By contrast, a recent labor pact between Hollywood producers and the International Alliance of Theater Stage Employees only passed due to a complex mathematical mechanism that critics say was not a majority.

According to the Guild release, the two-year pact includes pay raises of 3% and 2%. There are  additional pay and benefits for employees based on position and tenure, guaranteed severance pay including health care and “just cause” protections for employees.

Staff writer and Guild activist Dusty Christensen thanked the community and striking columnists for their support before today’s “historic victory.”

“We look forward to continuing to work with the community to strengthen the Fourth Estate here in western Massachusetts,” he said in the Guild’s statement. 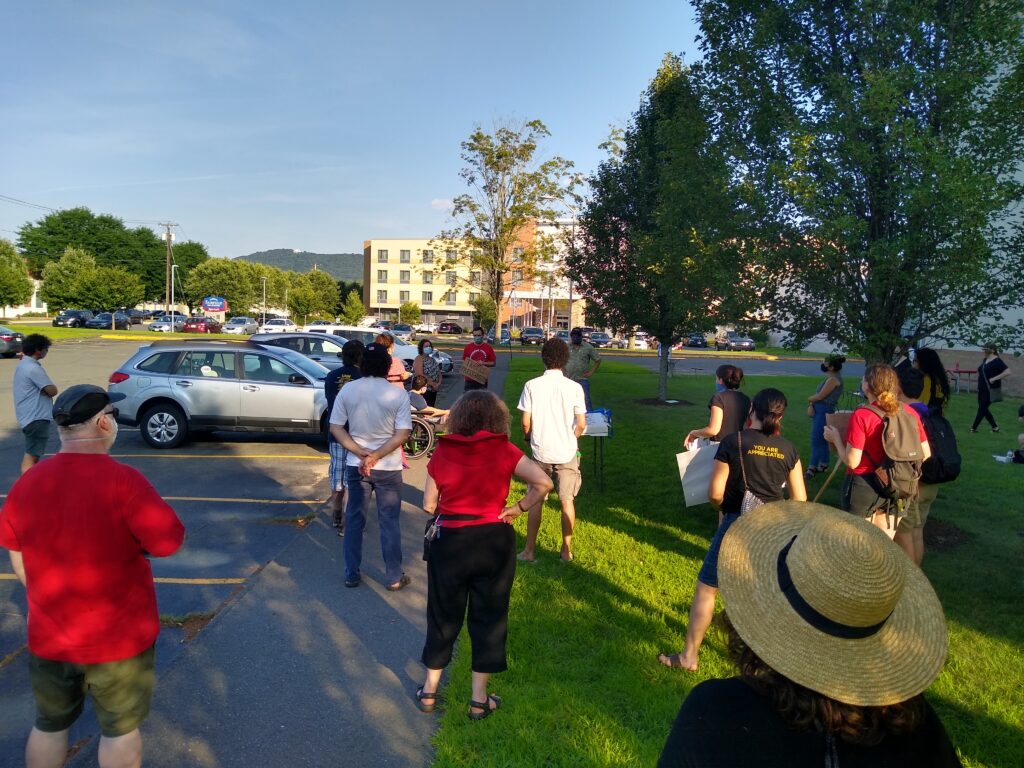 Pioneer Valley Newsguild members protesting the close of the Gazette’s plant in 2020. (WMP&I)

Despite the historic and continued strength of Pioneer Valley organized labor, unions have not been as influential in local journalism. Local television and radio staff are often in unions, but the organizing histories are complex and often transcend journalism entirely.

The Republican is unionized, but its employees’ independent labor organization disaffiliated from the national NewGuild decades ago. The Springfield Newspaper Employees Association is not viewed as particularly powerful compared to peer unions at other papers. The Reminder and Masslive—also an Advance property—and their subsidiaries are not unionized.

After years of working without a contact, Boston Globe employees recently ratified a deal with management.

The Pioneer Valley NewsGuild organized Gazette employees as a subunit of the Providence NewsGuild, a NewsGuild local. Members won a recognition vote in December of 2018.

Only a couple of months later, staff in the Hartford Courant’s newsroom organized a subunit of the same NewGuild local. Unlike NNE, the Courant’s owner, then-independent Tribune Publishing, opted to recognize the union voluntarily. The paper has since closed its presses—the Guild did not represent those employees—and now prints its paper at The Republican’s printing plant in Springfield.

Like the Gazette employees, staff shrinkage—some pandemic-related, some not—have thinned the Courant Guild’s herd. Alden Global Capital, a hedge fund that buys and squeezes profit at the expense of employees—and local news—bought Tribune in May. Efforts to reach a pact between the newsroom and management remain ongoing.