A Tradition the Coronavirus Could Not Crush? Town Meeting & Its Moderation … 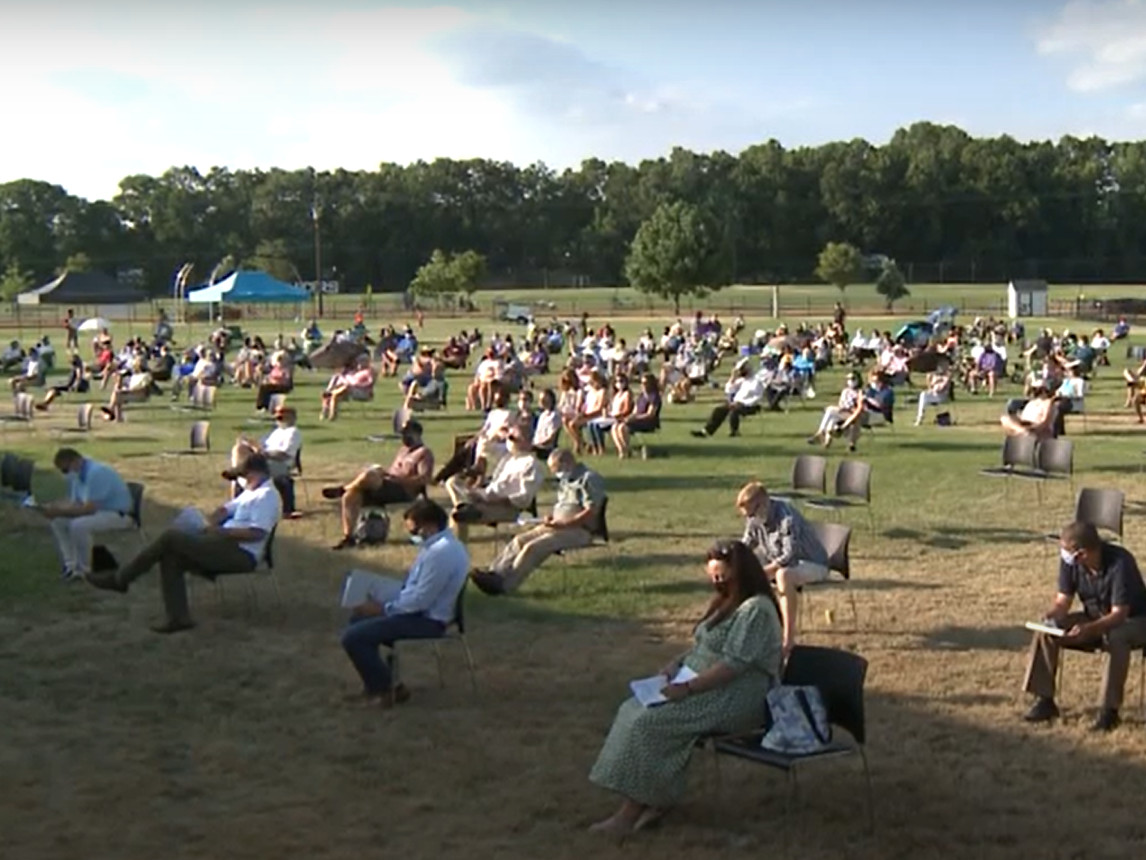 LONGMEADOW—In the beginning, there was Athens. Then came New England Town Meeting. New England stuck to tradition (and expanded the franchise).

Town meeting, specifically an open town meeting of registered voters, is the only direct democracy in the United States. A tradition that predates the king America’s Founding Fathers overthrew, it has endured centuries of change and churn. Not even a once-in-a-century pandemic that complicated gathering itself could consign it to history’s wastebin. COVID-19 did not spur towns like Longmeadow to abandon it even when neighbors did so for less earth-shattering reasons.

Town moderators run the meeting. The moderator here, Rebecca Townsend, built part of her academic career on this institution. It was only natural for her to run for and win the post in 2015. Last year, she became President of the Massachusetts Moderators Association. That has given her the oddly fascinating task of steering this uniquely democratic form of government to a post-pandemic phase.

“Just because there’s a democracy doesn’t mean, necessarily, the decisions are going to be better,” she said of Town Meeting. “They’re going to represent the community.”

Town meeting varies among the six New England states. According to the Massachusetts Municipal Association, most of the commonwealth’s 351 municipalities are legal towns. The overwhelming majority have “Open Town Meeting.” The rest have representative town meeting, electing a couple hundred residents who act as the meeting. During the pandemic, they could go virtual, however. 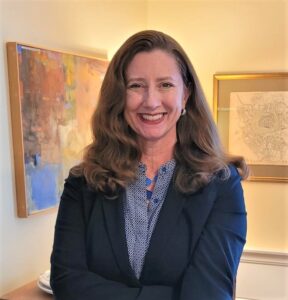 Townsend, a moderating force. (via Twitter/@townmoderator)

Larger towns like Longmeadow, population 15,853, can have more heated debates or even some divisions. Smaller communities often manage more by consensus.

“That’s of course the original form of government, and by original, I mean before the Europeans got here,” said Michael Forbes Wilcox, Town Moderator of Alford. Wilcox has led Town Meeting in his Berkshire County town of 486 for about 20 years.

Town Meeting has endured because of the direct connection between citizens and decision making.

Wilcox recalled the difference he felt at Town Meeting after here first registered to Alford at his current address, originally a property to escape to from New York. In the city, he voted for officials among strangers. In Alford, he and his neighbors made the calls.

“It’s appealing because it really is and it feels like democracy,” he said.

Wilcox has known Townsend since Deval Patrick’s gubernatorial campaign. Yet, they got to know each other better working on a committee of moderators brainstorming about how to run Town Meeting in a pandemic. That work played a role in her election as president of the Moderators Association

In an interview at the Starbucks here in Longmeadow, Townsend described her own journey toward the center of local government. She has been active in the Moderators Association from her earliest days as the top parliamentarian here. She attended trainings and met colleagues from across the state.

Townsend and her husband raised two children here. Originally from Rhode Island, where towns have a stripped down version of Town Meeting, she recalled her father’s participation. But Townsend dove into the deep end of the democratic pool, writing her dissertation on Town Meeting.

“I was interested, and I had been interested in the process of deliberations whether national level or a micro level,” she said. “‘How do people solve problems through talk?’ ‘How do they weigh advantages and disadvantages?’ and looking for a place to analyze that.” 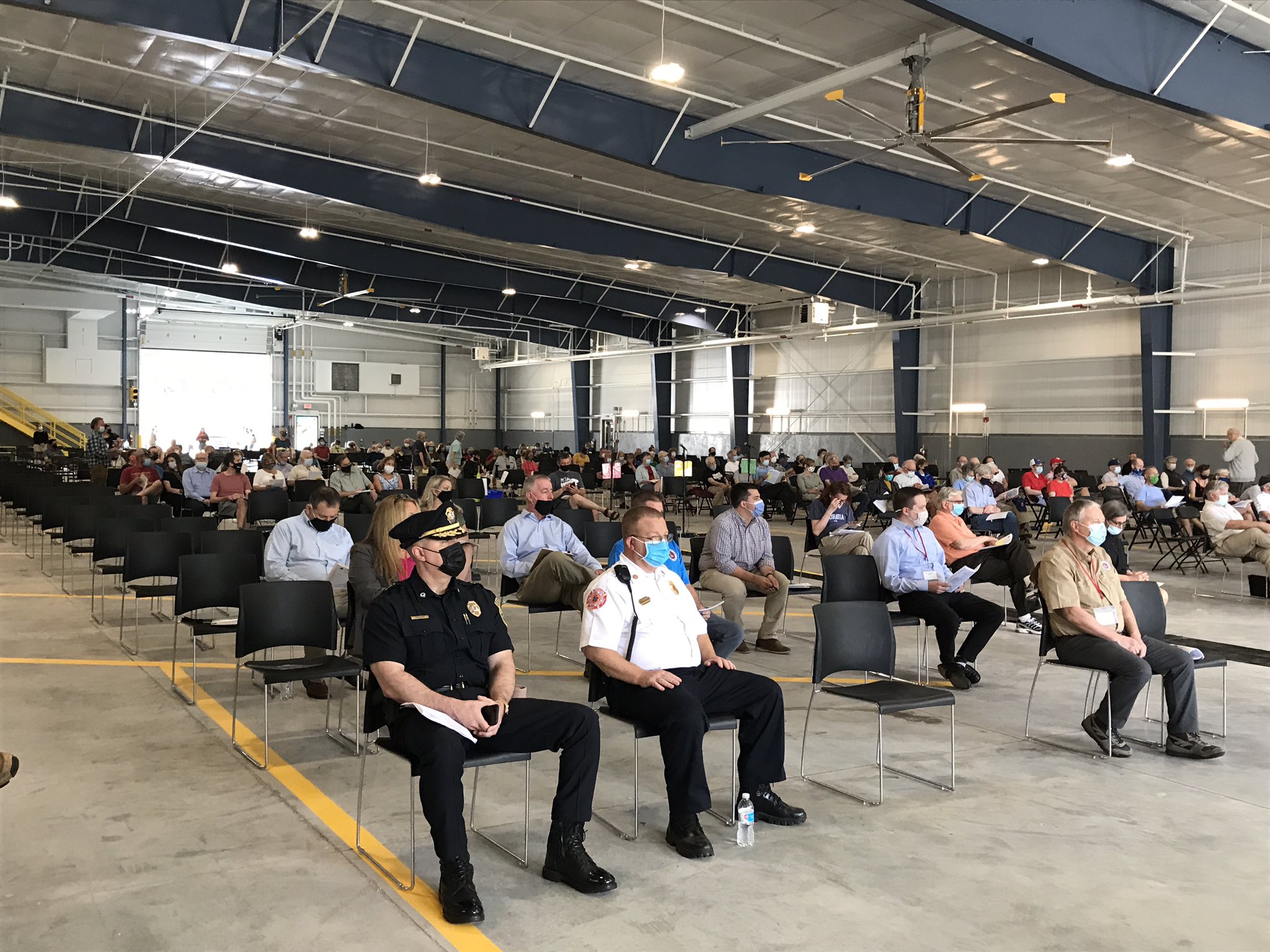 Longmeadow Town Meeting 2021: Indoors, with a dash of distance at the DPW facility. (via Twitter/@LongmeadowBiz)

Her advisor steered her toward Town Meeting. She sat through tons of meetings and dug into potboilers like Town Meeting Time, the institution’s parliamentary rules. With its focus on rhetoric and deliberation, it was a natural fit given her earlier academic pursuits in teaching.

Today, Townsend is a professor of communication at the University of Hartford. In this space, her pursuits have considered how to better connect citizens with their government—and vice versa.

Townsend said she prepares for each meeting by reviewing the agenda, speaking with town officials and thinking through the meeting. She meets voters as they arrive, keeping an ear out for any last minute surprises. Then it’s game time.

Among the initiatives Townsend has championed is small citizens forums before town meetings. More informal Town Meeting these allow for more discussion. Citizens also loved two minutes videos about each article in the warrant which the town posted to the public access station’s YouTube page.

“They’re just about two, three minutes, you learn about the issue that you care about,” she said.

Residents also say Townsend has put a premium on access for all. Jose Rodriguez, a lawyer in town, recalled in an email that she personally intervened when a meeting volunteer blocked his access. The imbroglio ostensibly had racial undertones. Townsend delivered apologies in person on behalf of the town and took steps to ensure access for all residents, including those with children.

“Since then, the town of Longmeadow has had an extraordinary experience wherein residents are guaranteed ample unbiased participation in a structured, organized and professional environment,” he emailed. 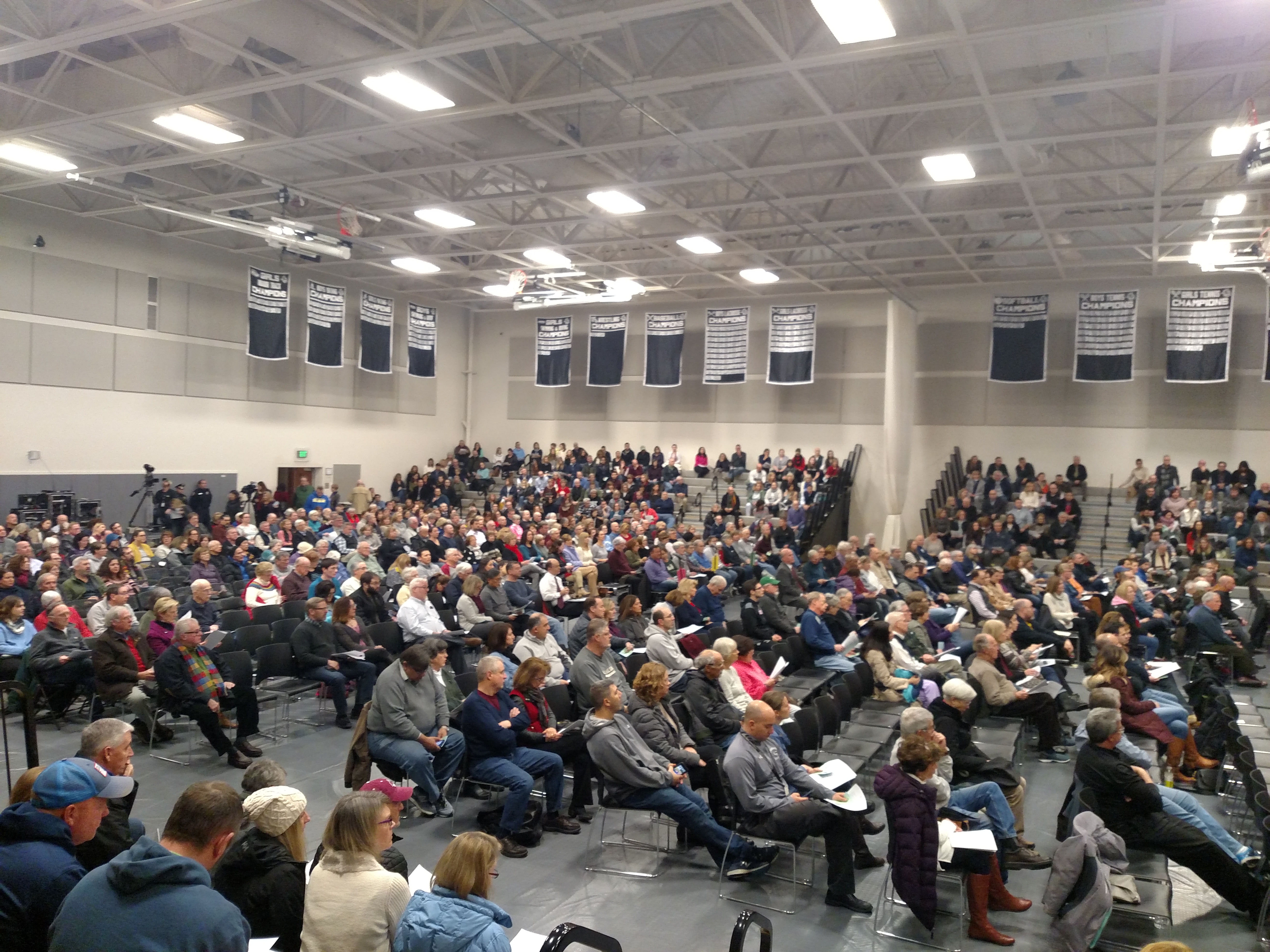 A special Longmeadow town meeting in 2019. COVID forced them outdoors briefly, but couldn’t stop the weight of tradition. (WMP&I)

Rodriguez even took Townsend up on an offer to join the Town Meeting Rules Committee.

They and the rest of the Rules Committee have worked on developing electronic voting. Unlike elections for office, Town Meeting, by default, uses open call, not an Australian or secret ballot. Neighbors and busybodies can see how everyone votes. Rodriguez suggested it allows peer pressure or herd voting.

Townsend worked with the Town Manager to secure funds for voting clickers, which will expedite voting and allow for more secrecy.

“The systems’ integrity, speed, accuracy, security and ease of use will contribute to the town’s democratic process without jeopardizing it’s traditional form of government,” Rodriguez said.

Wilcox said updates like the voting clickers exemplify how the meetings have evolved and survived. Some traditionalists think open call remains the best. Yet, the benefits of modern options help preserve the institution.

“I think that’s one of the things that have kept town meeting alive,” he said of updates like electronic voting. “In larger towns, the objection is [Town Meetings] take too long. The electronic voting has speeded that process up.”

Throughout the interview, Townsend was equipped with an N95 mask, a reminder of the challenges the institution she moderates has faced since 2020.

Despite the pandemic’s complications, there has been no stampede away from this form of government. Rather, there was also a deliberate effort to make it work even as the novel coronavirus would seem to proscribe gatherings. 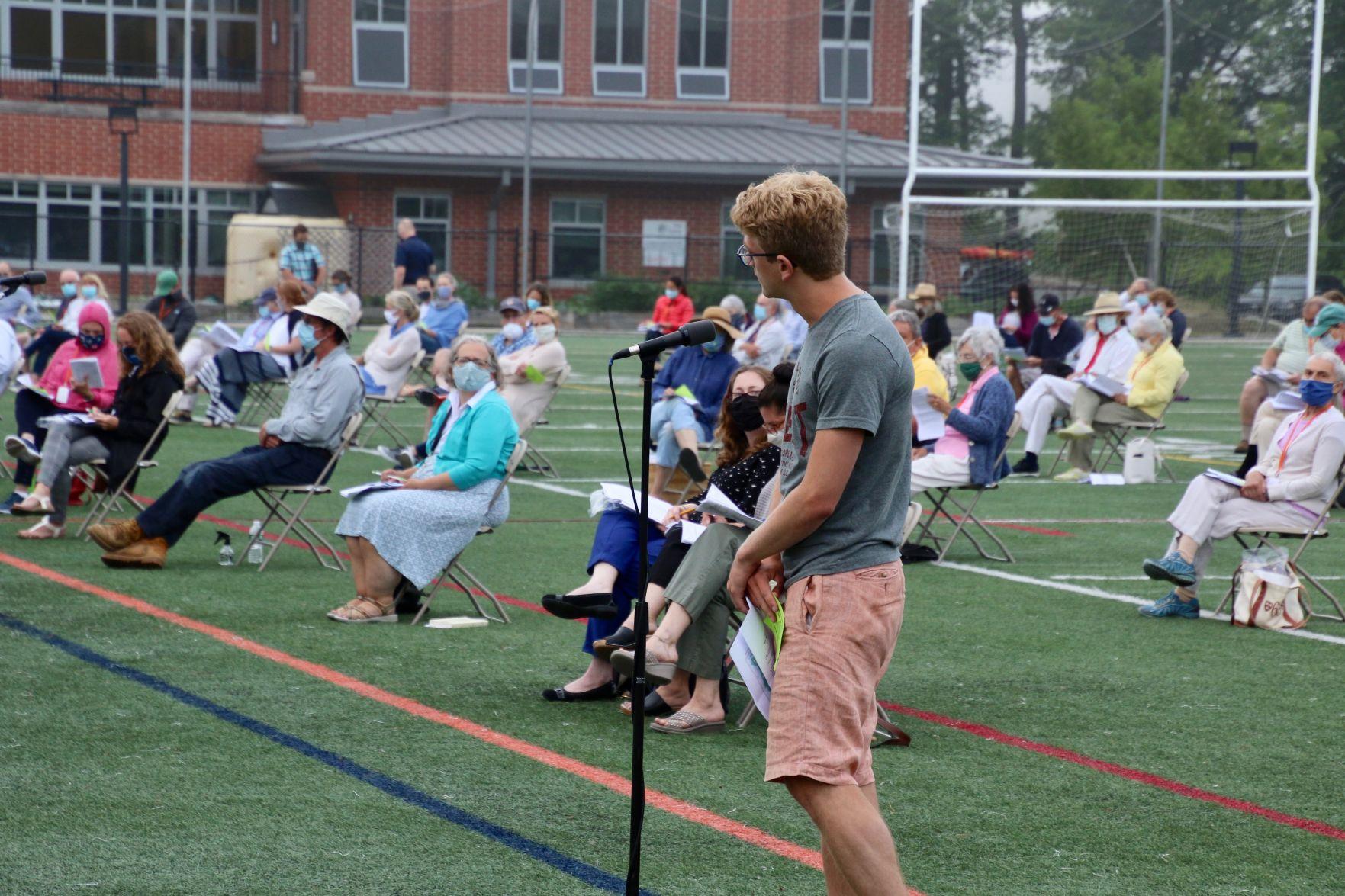 Town Meeting in the Endzone in Manchester. (via thecricket.com)

“We published a report that identified certain considerations that moderators should take into account,” he said. He noted that Townsend chaired the group and attributed the function of Town Meeting across the state, in part, to her leadership.

“By and large [towns] have been very successful in holding meetings, a lot of them outdoors and lot of people in their cars and some indoors, but done really carefully,” he said.

Townsend said she checked the metrics two weeks after communities’ meeting ahead Longmeadow’s in 2020. She observed no hikes in spread. The same was after Longmeadow’s Town Meeting

“That very aspect, the ability to gather, deliberate and vote, safely, in a democratic way was preserved,” she said.

However fitfully, the pandemic does appear to be receding. Townsend is thinking about what that means for her term heading the Moderators Association. For example, Townsend would like to hold Town Meeting trainings for town managers. Municipal managers’ professional group falls under the Massachusetts Municipal Association. It did not comment directly, but the organization is open to collaborating on programming that benefits members.

Townsend is not the first Longmeadow head of the organization let alone its first from Western Mass. Still, she plans to hold an association board meeting in Longmeadow. That helps businesses, but it also lets residents see how efforts the town is pursuing, like electronic voting, are “vetted” practices.

It also cannot hurt to tip the scales a bit in the 413’s favor.

“Having the association come to Longmeadow is one of those ways that, quite frankly, you can also bring the eastern central focus of much of our state government to Western Mass,” she said.

Town Meeting is not inevitable. Well-resourced and large enough to qualify for another form of local government, a pandemic could have tipped it over in Longmeadow.

There have been heated debates here. Others from before Townsend’s moderation got even hotter. Yet, people largely remain respectful. Town Meeting Time’s tight debate rules help. 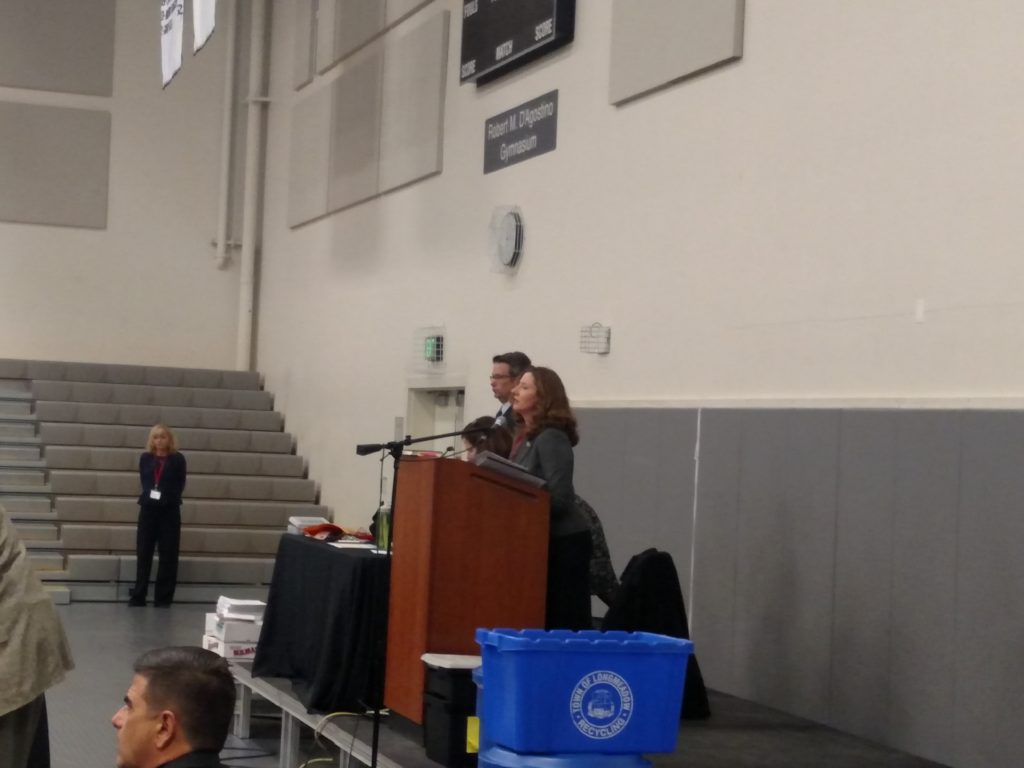 “It’s survived and managed to thrive because it is a way for people in communities to come together and perform the legislative function for their towns,” said Wilson of Manchester-by-the-Sea.

“In spite of the fact the level of civil discourse certainly at the national level and even at the local level, a tradition of respectful and civil discourse at Town Meeting prevails,” he continued.

Townsend declined to speculate why other Valley communities moved away from being towns over the last several decades. However, it is notable that Longmeadow is holding onto it, which underscores something about the meeting itself.

She observed that there is study and conversation about people trusting government. Town Meeting requires consideration of the inverse.

“In the constitutions and charters of communities with open Town Meeting, the very foundational documents trust [voters] to make decisions. That’s a radical shift about thinking about people than most studies of government look at,” she said.

Those decisions may not always be right, but they reflect the values of a community.

“We trust you to make a decision,” she said of town residents.