Axios Marks Its Spot in New England, but What Will Be the Coordinates?… 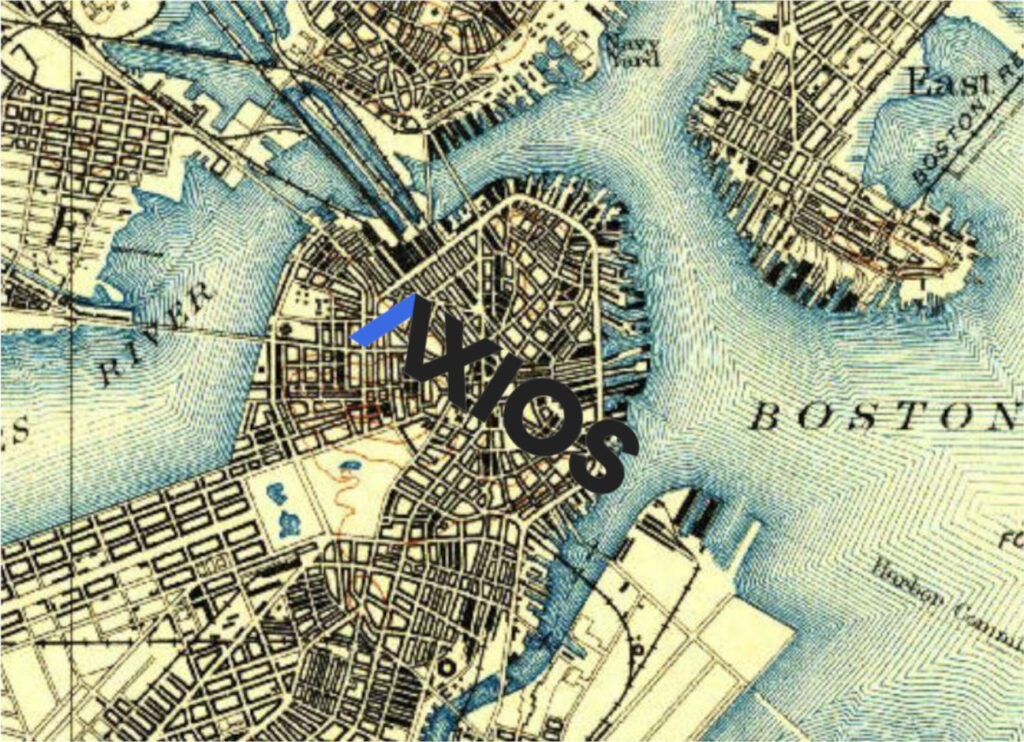 Boston, you are worthy… (created via USGS & wikipedia images)

“Because it’s Boston!” an energetic Nick Johnston says when asked why the Hub of the Universe is on Axios’ expansion list this year.

“It’s a big thriving city,” the Axios publisher continued. “Why not Boston?”

Axios is coming to Boston, following success elsewhere. As the capital of a small state like Massachusetts, landing there can ripple out much farther. The news startup had aimed its “smart brevity” first at Washington and has since evolved toward newsletters. Today, Axios, which means “worthy” in Greek, has a manifesto in which it joins a “crusade” to save local journalism with quick and to the point style.

Whether the commonwealth’s extremities like it or not, Boston holds tremendous sway over media in Massachusetts. Yet, the media and journalism anchored of the state—and arguably of the New England region—is more robust than average, especially in the city proper. That has led to snickering about what Axios is really bringing.

“Finally, Boston to get the ‘smart, modern, trustworthy local news’ it aches for,” read a headline on a Universal Hub post that mimicked Axios’ bullet-point style.

Some in Massachusetts think more eyes on the city and new perspectives are always welcome. Johnston, a former editor and reporter at Bloomberg and The Washington Post, understands the skepticism. Still, he takes it on.

“More journalists in a community is better than fewer journalists. I have a spreadsheet that says I’m going to hire 36 journalists in local communities in the next four months and I think that’s a plus,” he said.

As in its other cities, Axios Boston will start with two reporters.

Axios is not only outlet on its way. City Cast, a local podcast startup, will also open up shop in Boston late in 2022. These companies are not looking to displace the incumbents like The Boston Globe or the region’s public radio stations, but rather augment them.

Though their goals and strategies are different, they follow a pattern legacy institutions have set. Given Boston’s size and influence, national media like wire services and The New York Times have long a foothold there. 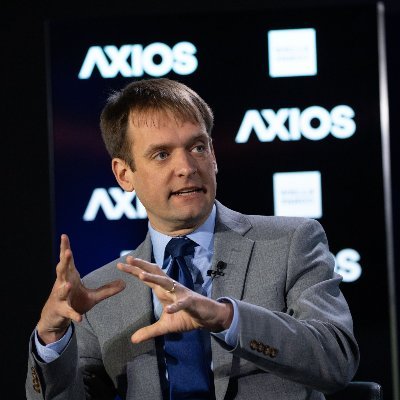 In a recent interview, Johnston, who as Axios’ publisher is overseeing the local expansion, emphasized recruitment of people who know their communities. Axios’ basic format—“One Big Thing” “What they’re saying!” “Go Deeper”—cuts across all newsletters and most stories. The backend operations and business side shall run out of Arlington, Virginia.

Massachusetts media meditators wonder whether Axios can provide a perspective that differs from consensus that can ossify in any community. Johnston said the writers will have plenty of leeway.

“It’s really dependent on each community. It’s a conversation I have with every reporter,” he said. “Look at who we’ve hired. We are not hiring aggregators.”

He cited alums form business journals, alternative media, and legacy publications that have populated the early newsletters in areas from the Twin Cities to Tampa. Stories that lead the newsletter often have their own, in-depth links.

“There’s a basic template. We know how to deliver this information,” he continued. Johnston pointed to the different content from craft beer in Denver to discovering quirky new locales in Chicago.

However enthusiastic Johnston is about Boston itself, he concedes its size and vitality also translate into more banal concerns about financial viability. Axios is, after all, a for-profit company, earning money on ads, events and sponsorships. However, he insists that he would like to see other cities in the fold to feed a “hunger for journalism for local communities.”

Johnston adds that the response from advertisers in other cities has been quite positive, perhaps defying skeptics. A spokesperson said Axios had signed up 700,000 subscribers for its local newsletters.

“That feedback has made us more confident that this is something really awesome with a lot of potential,” he said.

At this stage, Axios is focused on hiring staff to developing the Boston newsletter. A company spokesperson said that building out the ads and sponsorship sprinkled into the newsletter will come afterward.

Veterans of Washington Beltway media including Mike Allen, John Schwartz and Jim VandeHei founded Axios about five years ago. Since its purchase of news startup The Charlotte Agenda, Axios has tried become a solution, if not the solution, to the collapse of local journalism. There is plenty of ambition in wanting to “save local news” as Allen, once of Politico, trumpeted last month.

Charlotte, the launch pad. (via wikipedia)

Despite being smaller than whole cities’ media markets, Massachusetts is geographically segmented. Axios’ arrival in Boston may not always interest non-Bostonians unless the subject is state politics or sports. How far beyond the city limits Boston Axios traipses will turn on who they hire. Johnston did point to the Maryland Shore’s cameos in the DC newsletter, drawing obvious parallels to Cape Cod.

The daily newsletters during the week usually have 5-6 stories, covering a fair amount of ground, and digestible in only a few minutes. In the those WMP&I reviewed over the last few weeks, the newsletters have a healthy mix of news, culture, food and whimsy. Johnston expected civic affairs and politics to be prominent, but not overwhelming.

“We got our start in politics,” he said, referring to himself, VandeHei and Allen. However, “If you look at the newsletters. The vast majority are not politics at all.”

There do seem to be some stories that, whether inadvertently or not, crest over several newsletters if not simultaneously. For example, both the Chicago and Philadelphia newsletters have pondered struggling hotel occupancy in the last few weeks. This is an issue nationwide, just as social justice movements would be—which have been in the newsletter, too. The newsletter writers do tailor the subject to the area they cover. 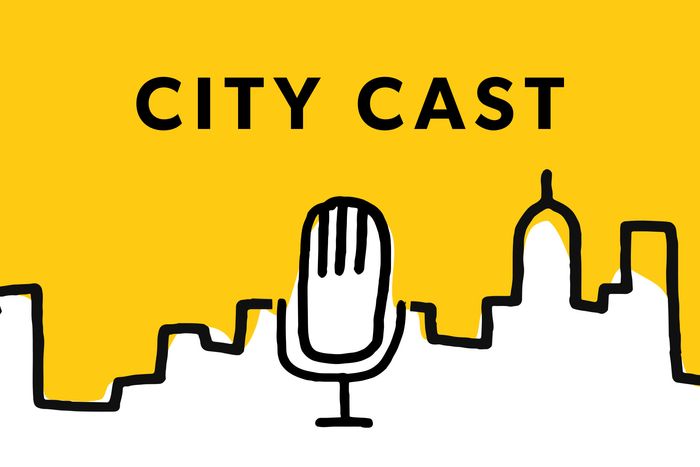 Coming to a Boston soundwave near you? (via Vulture/citycast.fm)

City Cast, the Washington-based startup plans a mix of centralization and local expertise. It is not aiming for new deserts, however. Rather, David Plotz, City Cast’s chief executive, said Boston was excellent media to utilize the medium of audio and its intimacy to connect audiences to their cities.

“We think that streaming audio allows people to have a different kind of relationship to their audience,” he said of City Cast’s role.

As with Axios, the intention is to given the hosts, producers and eventually newsletter writers creative and reportorial control.

“There’s certain things we can do centrally,” he said. “When it comes to what are we covering day-to-day, what does the show sound like day to day, it comes from the folks that are [local] experts.”

At first blush, the expansion echoes the one Politico did seven years ago to several large states. Since then and across several writers, its Massachusetts Playbook has become a key part of the political journalism scene here. There has been perennial talk of further expansion, especially after Axel Springer purchased Politico (the German company had also been an Axios suitor). A spokesperson for Politico did not return a request for comment.

Massachusetts has long been fair game for national media. The Washington Post had a Boston bureau as late as 1997. The paper recently announced an expansion, but a spokesperson indicated Massachusetts-based positions were not part of it.

Each outlet has its own goals. The New York Times has long had a bureau in Boston, although it is seeking a new full-time New England bureau chief. Yet, it sees its coverage of the region in the context of its audience.

“We cover newsworthy topics for our global audience, producing quality journalism with deep insight on our subjects. This requires our reporters to be on the ground and up close to the news,” said Charlie Stadtlander, a spokesperson for The Times.

Beyond filling the recently vacated bureau chief position, Stadtlander said the paper could reassess the size of New England reporting staff relative to need. Yet, The Times does not see local coverage as its focus. It did not provide figures on Massachusetts subscriptions. Still, institutions like The Boston Globe—which The Times used to own—are invaluable to the latter’s regional readership. 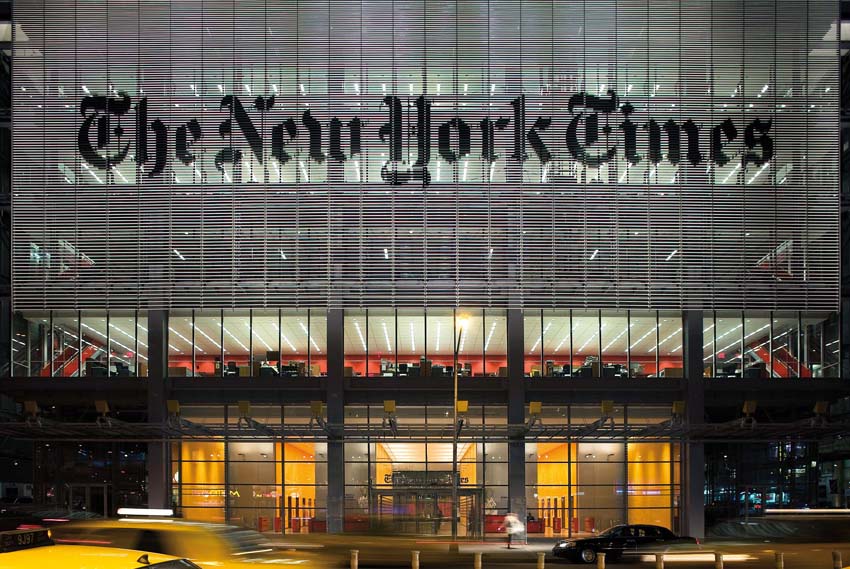 The Times Mothership in New York. (via wikipedia)

“We are supportive of all efforts to support and create quality local journalism. The world needs more original journalism at the local level,” Stadtlander continued.

As a cooperative of news outlets, the Associated Press is both sharing the resources of its members and distributing content to them. The AP retains a presence in Boston and at the State House specifically, even as state political coverage wanes nationwide.

“We are committed to maintaining a strong 50-state footprint, with a reporter in every statehouse, and to empowering local coverage,” emailed Lauren Easton, a spokesperson for the AP.

The AP is also working to expand the use of artificial intelligence, localization guides and the wire service’s StoryShare program. StoryShare is intended to better connect newsrooms that share geography and topic. A blog post from last year said six such regions were up and running including New England, but Easton said the AP was still building out the network for this region.

Reuters did not respond to a request for comment about its New England and Massachusetts presence.

Axios is more explicitly trying to integrate its product into its new communities by starting relatively small. Its flagship local enterprise, still the Charlotte original, has only a handful of staff even today. This is quite different from the Baltimore Banner, which is arming itself to become a full-fledged competitor to the incumbent, but troubled, Baltimore Sun. (Baltimore is on the list of Axios expansions, too).

Nevertheless, Johnston assures there will be scoops and exclusives. He points to an interview the Atlanta outpost scored with US Senate candidate Herschel Walker.

“I don’t see why Axios should get ridicule,” Plotz of City Cast said. “If you look at the product they’re creating across the country, it’s really, really good.” Axios’ office in Virginia. (via glassdoor.com)

Still, the question becomes how far news product reach out from their base city. In Massachusetts, Plotz expects its Boston podcast is eyeing those within “T-range,” likening it to the Metro’s extent in Washington.

It would not be without precedent for Axios to eventually expand into smaller cities. It has opened shop in places that don’t top any Census population lists, like Northwest Arkansas.

“Will it suddenly bubble up that I need an Axios Manchester or an Axios Providence?” Johnston replied when asked about further New England newsletters. He doesn’t know, yet. While he mentioned the largest cities in New Hampshire and Rhode Island, he wasn’t closing the window on places like Lowell or Springfield someday either.

Referencing Axios Baltimore, he added, “I would love to have an Axios Annapolis.”

Johnston wants feedback whether about how a city’s newsletter should look or what city should be next. More pertinently, he reiterated that Axios is hiring and welcomed attention to the company’s willingness to pay for talent.

“This is a fun time to be in journalism. There’s all kinds of opportunities,” he said.