UPDATED 2/7/22 11:53AM: With additional comments on Jordan’s passing and for a correction. A previous version of this post said Jordan and Markey overlapped two terms in the House. It was two years. 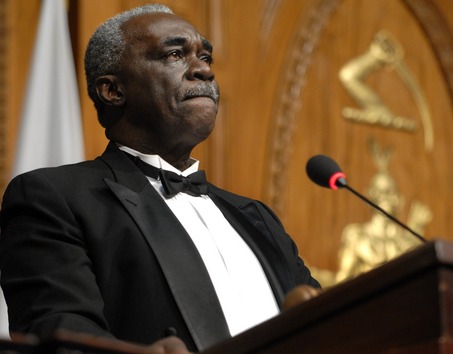 Raymond A. Jordan, a titan of Springfield politics, history-making figure and sought-after endorsement in state and local races, has died. From his election in 1974 to his retirement as a state Democratic Party vice-chair, he became perhaps the city’s most prominent Black political figure.

Jordan was a key part of Mayor Domenic Sarno’s coalition—Jordan’s daughter, Denise, served as the mayor’s chief of staff for 11 years—ever since winning office in 2007. The exact number of votes he could guarantee waned as he pursued other endeavors. Still, Jordan could raise money for local candidates and connect statewide pols to Springfield’s Black precincts. Yet, Jordan was also loyal, backing those he developed relationships with long ago such as his one-time Beacon Hill colleague, then-Malden State rep Ed Markey.

Mayor Sarno’s office confirmed Jordan’s passing in statement posted to Facebook. An exact cause of death was not identified, but sources tell WMP&I Jordan, 78, had ongoing health issues.

“Ray was a well-respected champion for his district, from being on the front lines in the 1960s fighting for the civil rights cause to being known throughout the state and the nation for his Democratic leadership,” Sarno said in his statement.

In addition to daughter Denise, Jordan leaves behind his wife Donna and another daughter, Darlene, according to Sarno’s statement. Denise Jordan early in her tenure as mayoral chief of staff. (via Springfield City Hall)

“He was the true definition of a public servant. People called day and night looking for his help, and he was there for them. People would even come to the door, asking for his help,” Denise Jordan, now the executive director of the Springfield Housing Authority, told The Republican.

Other tributes have begun pouring in.

“Though he ‘retired’ from the legislature and HUD, Mr. Jordan never retired from serving the people of Springfield,” Lederman said in a statement. “I’m grateful for the opportunities I had to hear his insight and perspective in the final years of that service, especially related to housing and jobs, and to witness his stalwart championship of Democratic candidates, causes, and ideals.”

When he won what was then the Mason Square-based 12th Hampden District seat, Jordan was among few reps of color. He was the first person of color Springfield sent to Boston.

Ray Jordan was an instrumental figure in paving the way for people of color to enter into the political and advocacy fields in Massachusetts. His loss is profound and my heart goes out to the entire Jordan family, his loved ones, and his many friends during this difficult time. pic.twitter.com/VUvYLrtxRY

Jordan developed strong ties with his colleagues, even when servicing together only briefly. For example, he and Markey only overlapped briefly. But Jordan hosted the senator in Springfield for a strategy session with Valley luminaries during the 2020 primary.

In a statement released Sunday, Markey said Jordan’s friendship and insights were constants throughout his career.

“We used to play basketball together on Beacon Hill, and he had an indomitable presence on and off the court,” the senator said. “What I owe him cannot be measured, and what he has given me, his colleagues, and all of Massachusetts will never be forgotten.”

Over the last ten years, Jordan had pulled back from as prominent a role in politics. However, he was still active as recently as the city’s last political cycle. He turned out for a rally  Councilor Lederman held last fall. Before he formally left Massachusetts Democratic Party executive committee, he would bring a forceful touch to speeches at conventions.

Jordan’s embrace of Warren as she arrived in Springfield for the 2012 state Democratic convention, sent an important signal in the city. It no doubt helped her lockout opponents for the primary ballot and train her cannons on Scott Brown. Warren paid specific tribute to Jordan in 2016 when he formally stepped down as a vice-chair of the party.

“The Party has lost a wonderful person and leader,” state Democratic chair Gus Bickford emailed. “I’m so very sorry to hear of the loss of a leader of this party for decades who was a strong voice for so many.”

Though a pioneering figure among African-American politicians in the Pioneer Valley, Jordan was more of dealmaker. By contrast, his immediate successor in the House—and one-time rival—Ben Swan, cut a more activist figure in office. Another prominent Black pol, the late E. Henry Twiggs, while hardly undiplomatic, was more willing to do battle in public view.

Still, those that served with him emphasized that Jordan himself signaled a sea change on Beacon Hill. Markey observed that Jordan had helped usher in a focus on equal opportunity and justice in policymaking.

“He represented the next generation of Massachusetts politicians whose commitment to progress and reform resonates to this day,” Markey said in his statement. “Ray Jordan spent his career making housing more affordable, jobs more equitable, and Western Massachusetts more livable.”

The difference, however, may be one borne of timing. Jordan was far younger than Swan when he entered the legislature. In addition to his political activities, Jordan had a whole second act in public life with gig at the US Department of Housing & Urban Development.

Still Jordan lived to see an African-American in the White House and, no disrespect to Edward Brooke, win Massachusetts statewide office as a Democrat.

Jordan’s passing signals the near end of an era in Black political leadership in Springfield. Though other have come up behind Jordan, Swan, Twiggs and the recently passed Sophia Jeffrey, the passing of the generation that once marched for Civil Rights will yield a palpable absence in the city.

This story will receive updates as additional information becomes available.