Standing with Ukraine, from the Connecticut River to Kyiv on the Dnieper… 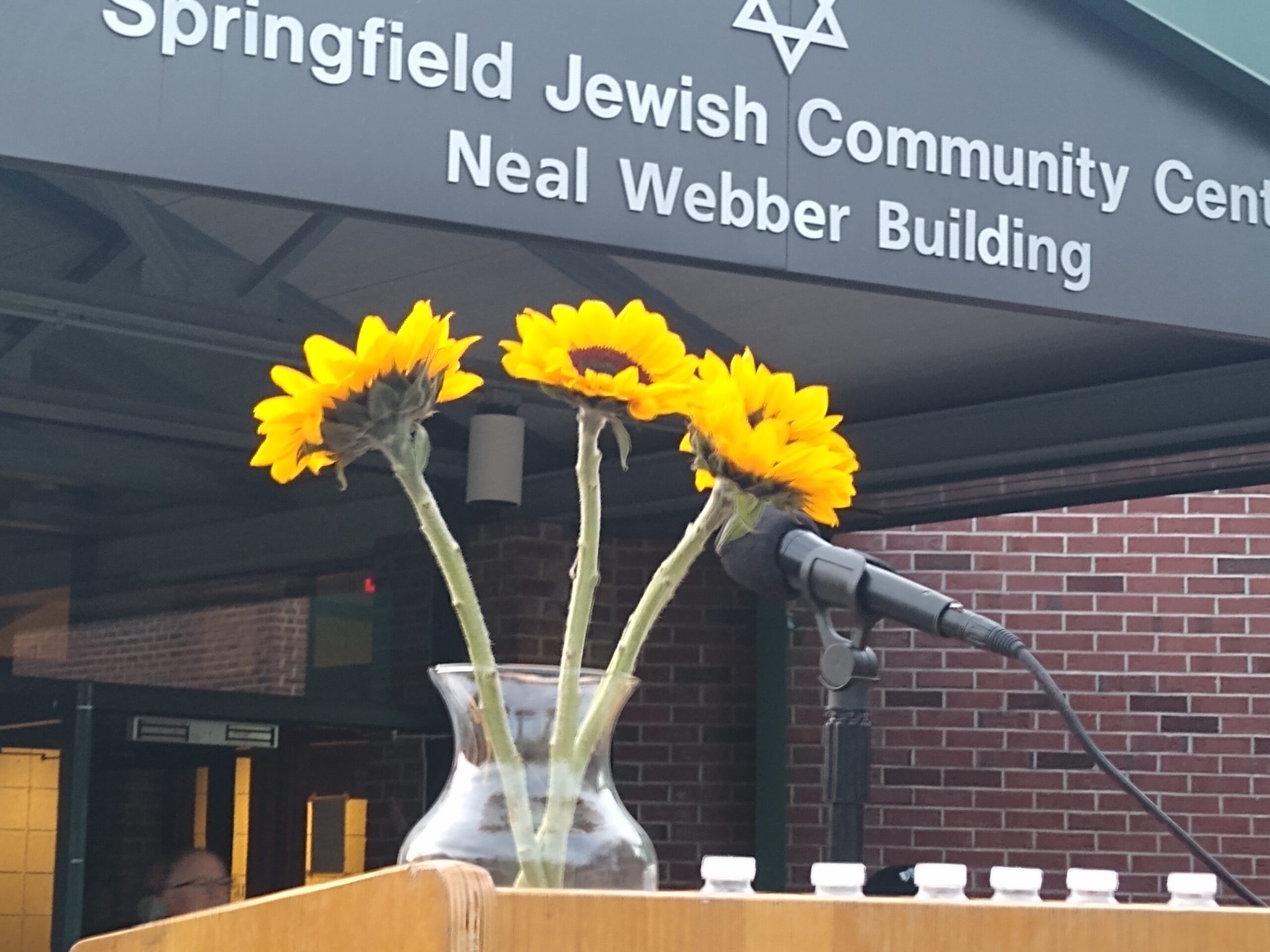 SPRINGFIELD—Almost ever since Russian President Vladimir Putin invaded Ukraine, perched above I-91 and the South End Bridge has been a show of solidarity. A Longhill Street home overlooking the Connecticut River has been lit with the colors of the Ukrainian flag.

On Tuesday, people from across the region gathered at the Springfield Jewish Community Center to show their support for the beleaguered ex-Soviet republic turned redoubt of democracy. Jewish organizations in the Valley sponsored a rally that featured people with Ukrainian ties, pols, and those raising funds for relief efforts.

“Ukrainians are strong and we have to be strong with them,” said Jessie-Sierra Ross, who drew from the lessons of the Holocaust.

Ross said her grandparents survived the Nazi Germany’s conquest of Odessa. Their experience, she said, manifested in the faces of Ukrainians fleeing the war.

Ukraine had become a target of Putin ever since it rejected his embrace eight years ago. Amid the Maidan protests that led to the pro-Russian—or at least Russian-sympathetic—president’s ouster, Putin took a more militaristic turn. Russia seized of Crime and fomentation of an insurrection in Ukraine’s east.

After months of buildup, on February 24 local time, Russia invaded the country of 44 million. Putin’s government had cited a lot of whatnot about security and NATO, which Ukraine had sought to join. Yet, a deeper reading of Putin suggest he had been taken in by his own ahistorical fanfiction. That faux lore deems Ukraine as an immutable part of some Russian whole.

Zelensky stayed put. The world shifted instead. (via wikipedia)

The United States, which had warned of the invasion for weeks, forecast and Russia clearly expected a swift toppling of Kyiv. Ukrainian President Volodymyr Zelensky, elected in 2019, received counsel from multiple sources to flee. He did not, likely turning the tide of history. As of this posting, Kyiv still stands and most analysts agree Russia has failed to achieve its strategic objectives. Ukraine’s stand ignited popular support, galvanizing Western governments to come to the country’s aid.

That stand with Ukraine came to Springfield on Tuesday evening. Supporters held flags and sunflowers, a symbol of Ukraine, listening to the testimony of those who knew the country well. Police cruisers sat along Dickinson Street, a reminder of the threat that once hovered over the JCC five years ago amid a national uptick in anti-Semitism.  Yet, that moment also recalls the the ecumenical solidarity it summoned.

“We know not only from the media what is going on but from real people who experience the pain,” he said. “It’s not far away, it’s pretty close.”

Though he warned Putin “threatens many countries,” Father Krip added that the response, from moral to humanitarian support from the community, had inspired hope “that peace can be in the world.” 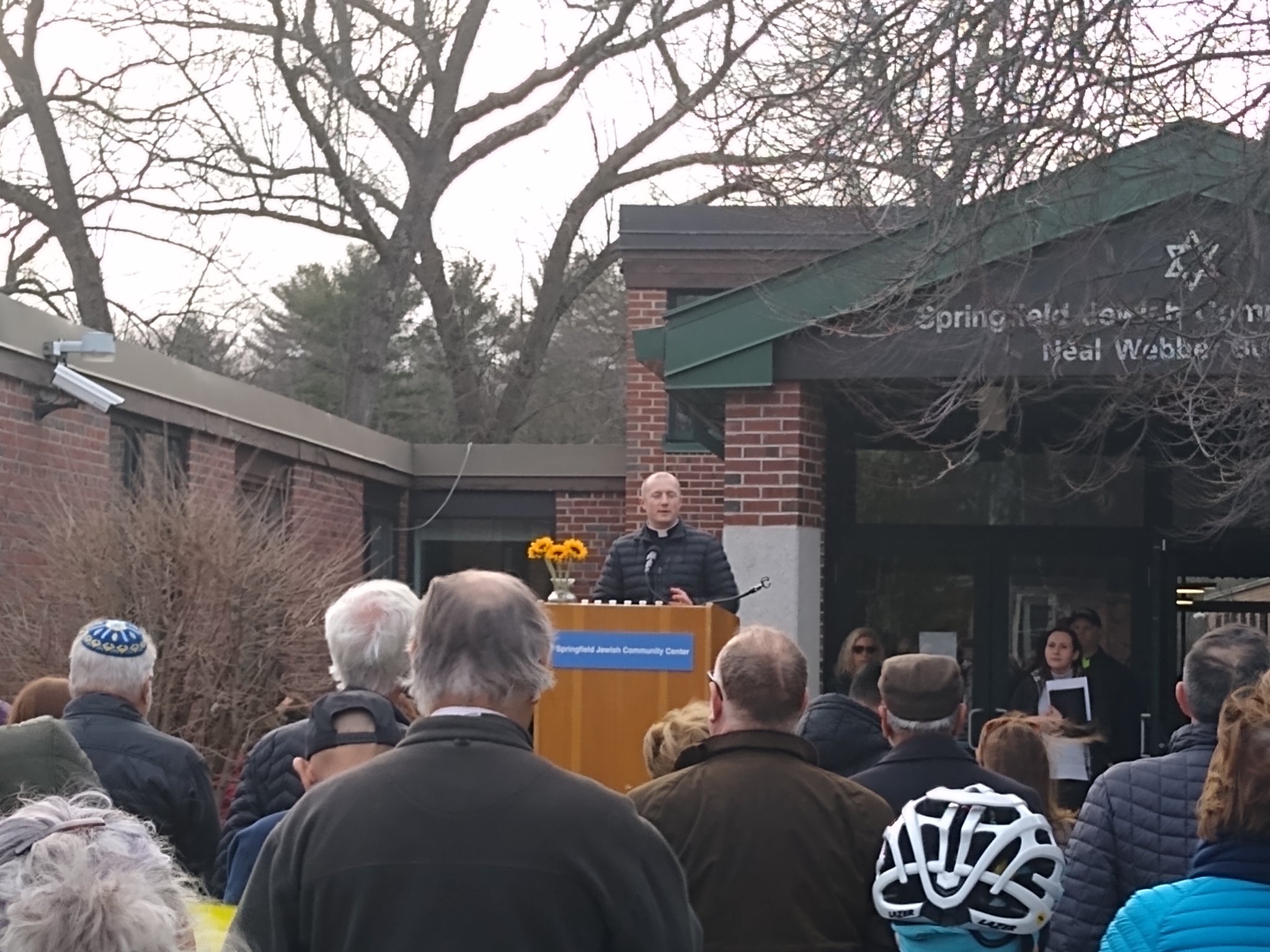 Fr. Krip, a native of Ukraine, addressing the rally in Springfield. (WMP&I)

Indeed, relief efforts have been working overtime to assist the flood of refugees Putin’s war has spawned. The United Nations estimates that 4 million Ukrainians have fled the country. Another 6 million may have become internally displaced in places like relatively calm Lviv in Western Ukraine.

Nora Gorenstein, the acting president of the Jewish Federation of Western Massachusetts, noted the rich Jewish history of Ukraine—Zelensky is of Jewish heritage. Organizations like hers had been building connections in Ukraine ever since the fall of the Soviet Union. Her office, located in the JCC, had set up resources online for people to contribute. Jewish federations nationwide, Gorenstein said, had already raised $30 million in relief.

“Tonight, we’re all Ukrainians,” he said. Neal cited Ross’s story about her family’s experience in the Holocaust, but also the experience of the Jewish community in the post-Soviet period. These nations and the Warsaw Pact countries, which were nominally independent during the Cold War, had stepped up for Ukrainians.

Noting the nearly $15 billion Congress has appropriated for Ukraine—nearly $14 billion of it recently—Neal condemned Putin’s invasion.

“What’s striking about this is that not only is this an act of aggression, Vladimir Putin is suggesting that he gets to define the nation state and the people that constitute it, and then make the argument as he has, that this is about denazification in Ukraine,” he said. “That’s Orwellian.”

The rally wrapped with a prayer for Ukraine—and for democracy—Rabbi David Seidenberg offered in both English and Hebrew. It began with a call to “tear out autocracy, tyranny and despotism.”

“May You give strength to all peoples and will to pursue righteousness and peace to uproot violence. As a unified force may they make healing good life and peace flourish throughout the world,” he concluded.

Rabbi Seidenberg did not invoke Ukraine’s national salute, “Slava Ukraini” in his close as Zelensky does in his videos. However, he ended with one more plea for support.

“May God protect Volodymyr Zelensky and may his country, Ukraine, triumph,” he said.