Analysis: Baker Completes His Conversion on the Road to East-West Rail… 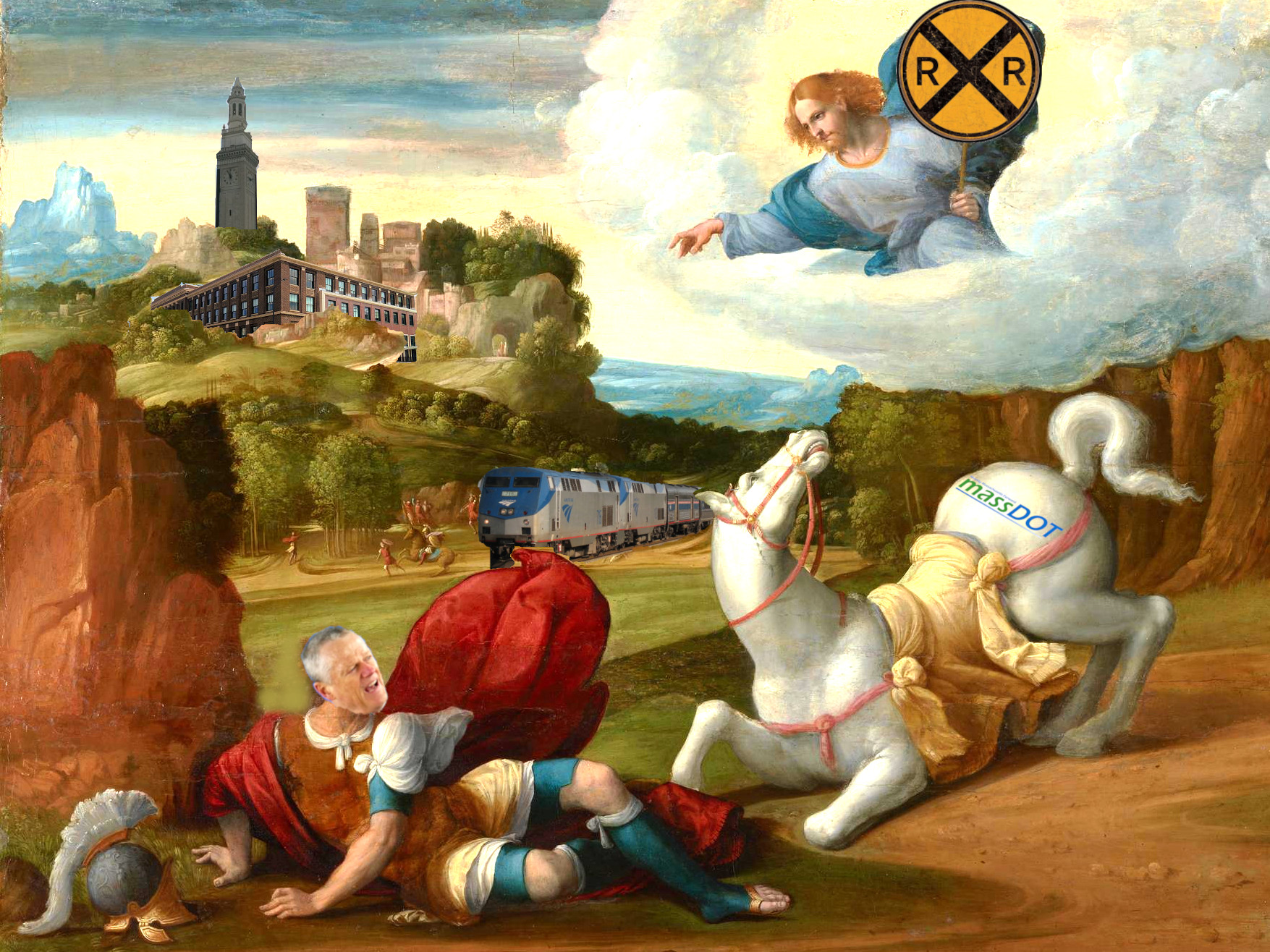 St. Charlie Baker of Swampscott sees the light, or at least a sign. (crated via Google search & Garofalo’s The Conversion of St. Paul/Yale Gallery)

Whether a gentle laying on of hands or a less voluntary conversion, Massachusetts Governor Charlie Baker is now a believer.

At a press event at Union Station in Springfield and alongside US Representative Richard Neal, Massachusetts Governor Charlie Baker endorsed a plan to establish a rail authority to oversee the implementation of East-West rail service. The outlined plan largely mirrors a recommendation from Baker’s own Department of Transportation laid out last year and issued in January. Many a bureaucratic study whither absent their executive’s support. Not here.

The announcement, held near some Springfield arcana that decorates the station, came after a closed-door meeting with Neal, Rep James McGovern, Baker and nearly all of the 413’s legislative delegation. At that meeting, Baker said they came to an agreement “on a path forward,” which Neal touted as a “huge step forward.”

“The governor has made a full commitment to East-West Rail. The conversation has gone on for a long period of time,” Neal told reporters Tuesday.

Neal couched it partly in terms of regional equity in transportation investment. Yet in effect, Baker was blessing what had become his administration’s policy after years of anything but.

State Senator Eric Lesser began his electoral career championing the project the same year that Baker won the governorship. Although Lesser had some success with the legislature, Baker and MassDOT, whose leadership he appoints, consistently frustrated studies and substantive action.

After Neal became the highest-ranking Democrat and later chair of the House Ways & Means Committee, though, the Baker administration softened. Still, even as MassDOT approved a study, it seemingly considered poor data sets, all but dooming access to federal funding.

On Tuesday, Baker tried to play down his lack of rail fervor.

“That somehow got turned around to me being in opposition,” Baker said according to The Republican. “I had questions.”

That is gobbledygook. His Excellency had long projected a frosty impiety about the project. 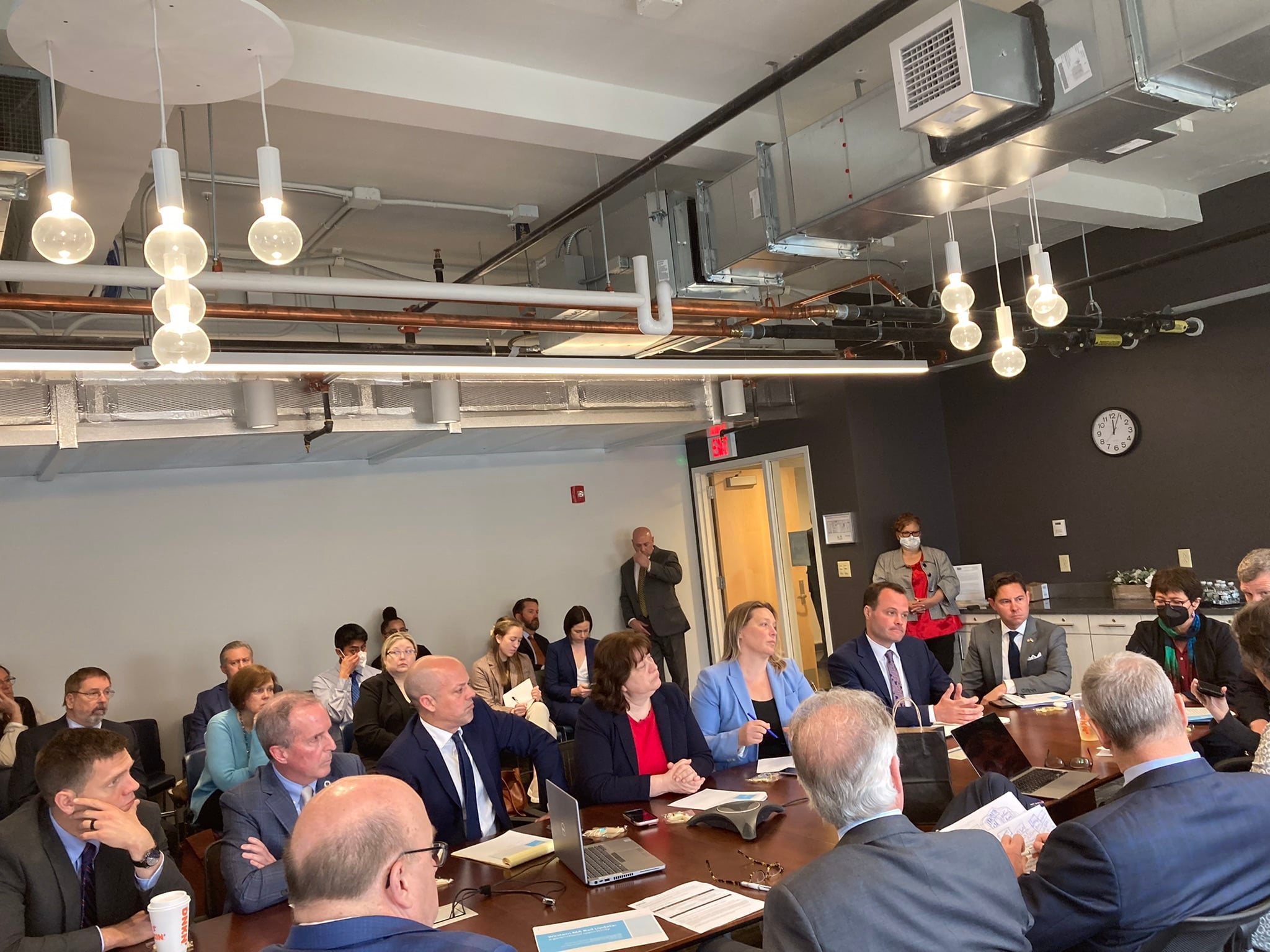 Whenever he saw the light, the reality of Baker’s embrace of the project would mark a new era in its history.

“It was a great jolt of momentum,” Lesser told WMP&I. “There had been questions about the governor’s commitment to see this through and he committed in front of all of us that he is committed to doing what he can do to make it work.”

Despite the push from legislators and congressmen, the election of President Joe Biden facilitated things in two ways. First, Baker’s Transportation Secretary, Stephanie Pollack, went to DC to work for the feds. While originally feted for her environmentalism and transit advocacy, erstwhile allies were flummoxed and frustrated with her low-energy support for rail. Another notable departure was the passing of Astrid Glynn, the state’s transit and rail director. She, too, never seemed very keen on East-West rail.

Then, Biden rescued infrastructure from being a punchline and turned it into legislation. Indeed, Baker, Neal and area legislators all said the bill’s funds would feature prominently in realizing East-West rail.

Boston to Springfield is an obvious expansion. Yet, many expect service to Pittsfield and on to Albany, too, consistent with Amtrak’s post-infrastructure bill plans. Under pre-Biden plans, Amtrak released a statement earlier this week announcing that service from Pittsfield to Penn Station in New York City would begin this summer.

Meanwhile, Glynn’s successor Meredith Slesinger expressed an enthusiasm for the project. Her prior employer was Amtrak, whose number one rider now lives in the White House. Early last year, the railroad began licking its chops at service expansions, including from Boston to Springfield and Albany.

By December, Slesinger was presenting an outline of MassDOT’s big White Paper on East-West rail to the Pioneer Valley Planning Commission. The tone was not one of doubt. 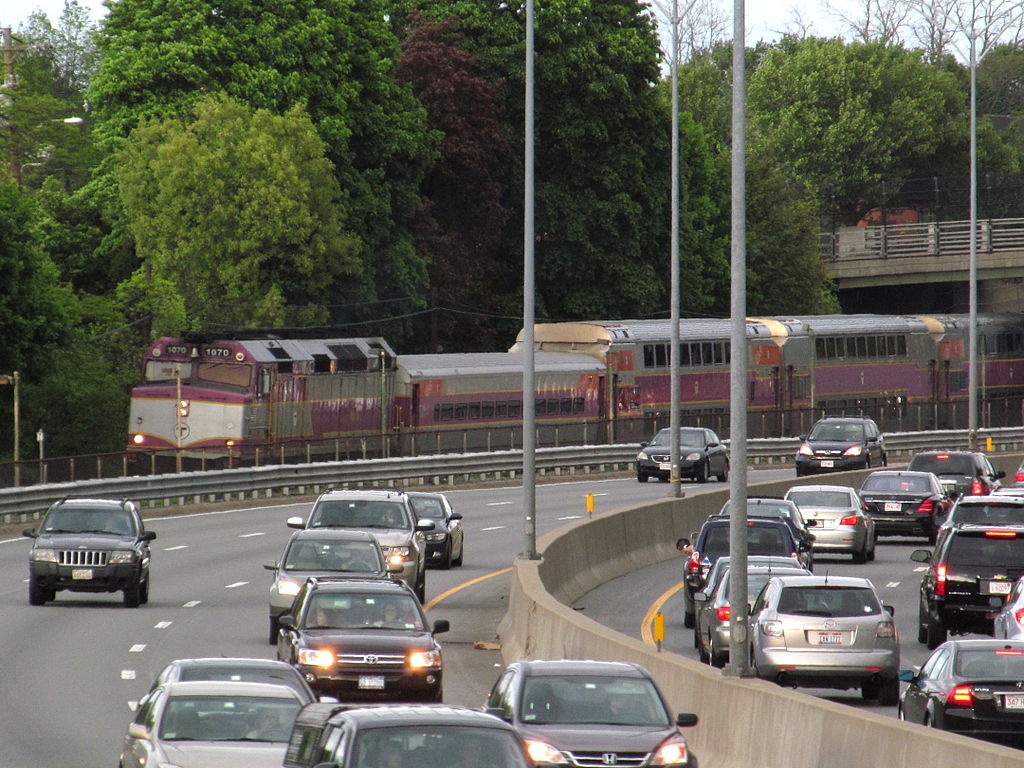 Room for one more on this train. (via wikipedia)

“I just want to acknowledge the interest and enthusiasm for rail service in Western Massachusetts,” Slesinger said as she began to present to the PVPC. What followed was a very hopeful outlook from Boston.

For the first time, MassDOT was explicitly calling for Amtrak to run service west of Worcester. For years, this seemed obvious but never policy. CSX, which own track from the Woo and on to New York State, has no obligation to let MassDOT or the MBTA run farther westward.

Amtrak has that right under statute. It also had leverage to expedite normally laborious negotiations by withholding support for CSX’s purchase of Pan Am railways. It backed CSX after receiving assurances of cooperation on service expansions. The Surface Transportation Board blessed the acquisition this month. The decision explicitly notes CSX’s obligations to Amtrak along the old Boston & Albany the former owns through Massachusetts and New York.

Even in December, Slesinger ostensibly played down CSX’s historical difficulty, too.

“We have worked together. We have done hard things together in history. I speak to them multiple times a week. I’ve noticed that they have been more willing to come to the table on some things,” she said then.

As for Amtrak, it welcomed Baker and Neal’s acknowledgement of the railroad’s role in East-West rail.

“We’re pleased that Massachusetts is continuing to move forward with East-West service and has decided that it should be operated as part of Amtrak’s network of state-supported services with which the route will connect,” an Amtrak spokesperson told WMP&I.

The White Paper also recommended the state establish a rail authority to oversee construction and operation of service Amtrak would run. The Northern New England Passenger Rail Authority, an instrument of Maine, performs a similar function for the Boston to Portland (and beyond) Downeaster.

The final piece in all of this could be Baker’s decision to not seek reelection. For nearly all his time as governor, Baker has made mysterious political decisions in the Greater Springfield area. One was kissing the ring of Peter Picknelly, heir to and president of the Peter Pan Bus empire. He would become an antagonist to Lesser’s efforts and Baker lent every ear he could spare to the motor coach mogul’s gripes.

There was more than a bit irony present during Baker’s first return to the Student Prince—which Picknelly co-owns—after announcing he would retire. Though Picknelly greeted Baker warmly, in fact the last redoubt of political opposition to East-West rail was falling. Though MassDOT’s warming to the project had already begun.

On Tuesday, it became policy. As Neal cautioned at Union Station, there is no timeline for the start of service and the US Department of Transportation has not released guidelines to apply for rail funds. There are steps the state, namely Beacon Hill must take. Legislation to establish this Western rail authority must does not yet exist.

Because the governor did not include it in related legislation that he has recently submitted, the legislature would likely have to add it via amendment or draft a separate bill. Something niche like this would likely pass as part of a larger piece of legislation. The preference is definitely before Beacon Hill goes on its election year hiatus in August. Neal told reporters it would likely end up in a now-pending bond bill.

“We don’t have a draft of that,” Lesser said. Baker “said he would work with us on language and the potential structure.”

Of course, the rest of the legislature has to sing the same hymn. Yet, between this commitment, Neal’s adamancy and the push from the 413’s delegation, one can hope after a foe like Baker has converted, he will only spread good news from here.