Briefings: Déjà vu for Velis, but with a Bit of a Tightrope This Time… 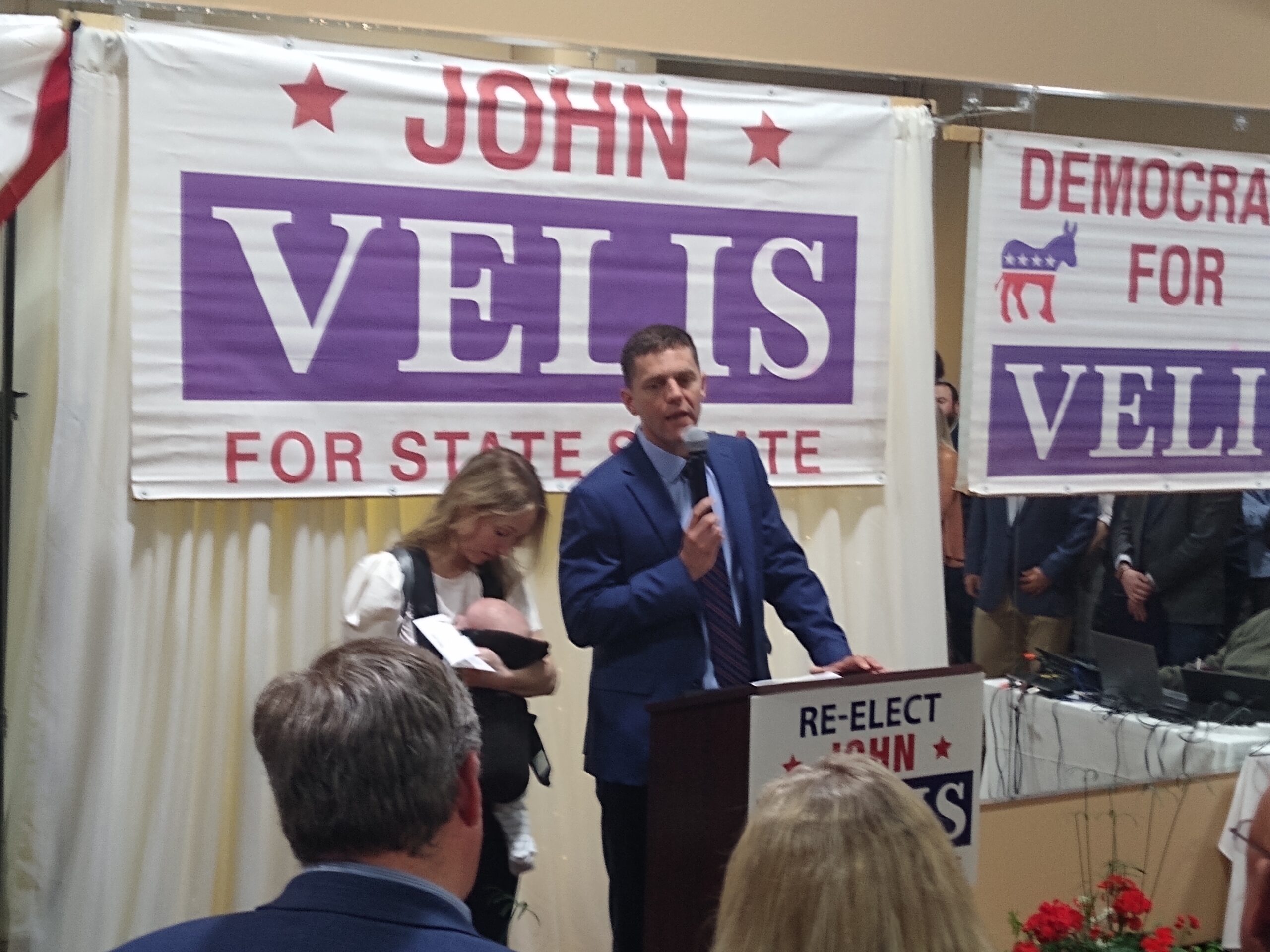 Can’t quite put a finger on what’s different? Apropos of nothing, what’s the plural of Velis? (WMP&I)

WESTFIELD—January 14, 2020 was an eternity ago. Yet, to the untrained eye, then-Rep John Velis’ first kickoff for Senate looked much like his reelection launch on Tuesday night. No one in 2020 knew Velis’ special election would be moved and the only celebration of his victory would be a coronavirus-safe gathering in a backyard here. A socially-distant Governor Charlie Baker would swear Velis in beside a grand staircase in a nigh-vacant State House, not in the Senate chamber.

Back then, as now, a swell of Valley politicos crowded the Shortstop Bar & Grill, long a haunt of Velis’. The signs were similar. Hampden Sheriff Nick Cocchi effusively introduced Velis both times. This time, the 43 year-old Democrat’s pitch was familiar, the main difference being wife Emily and baby Carson to call up to the stage, if briefly.

Public safety was present back then and they returned Tuesday in full force—Brian Keenan, head of the Springfield Police Supervisors Association opened the speaking program. The senator’s vote against the 2020ish police reform bill endeared him to law enforcement. However, in his remarks, Velis made an appeal to “disagree without being disagreeable,” contra national politics. With perhaps intentional ambiguity, he defended his colleagues, too, an overwhelming majority of whom passed the reform bill.

“What I would say is that you do have a lot of friends down in Boston. It may not appear that way sometimes, but you do,” he said. “We have your back.”

It echoed the strategy Cocchi and his predecessor Michael Ashe, who also attended Tuesday. Engage reform and colleagues of all stripes, but guard your flank. 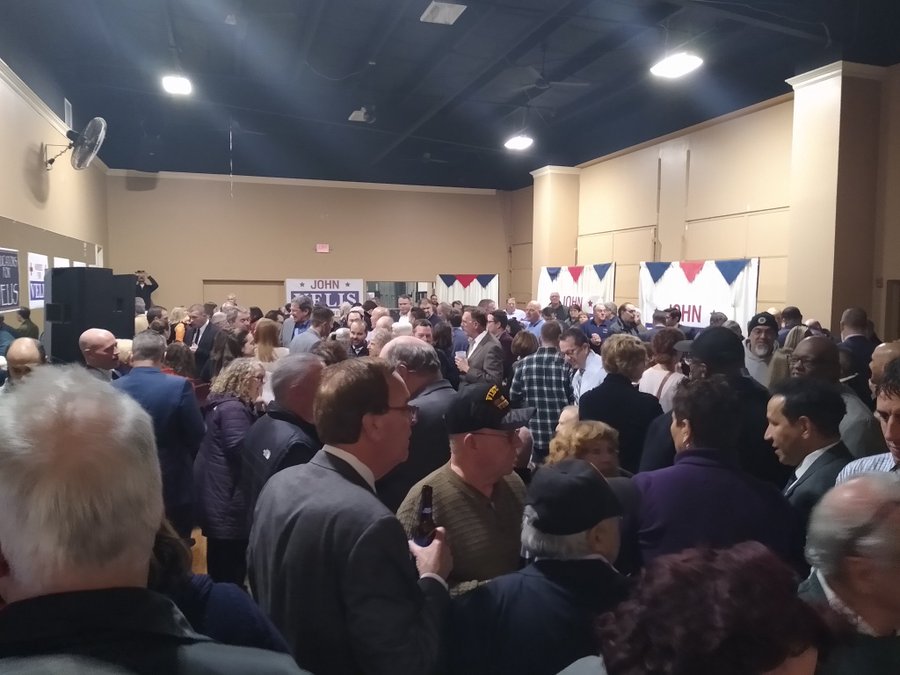 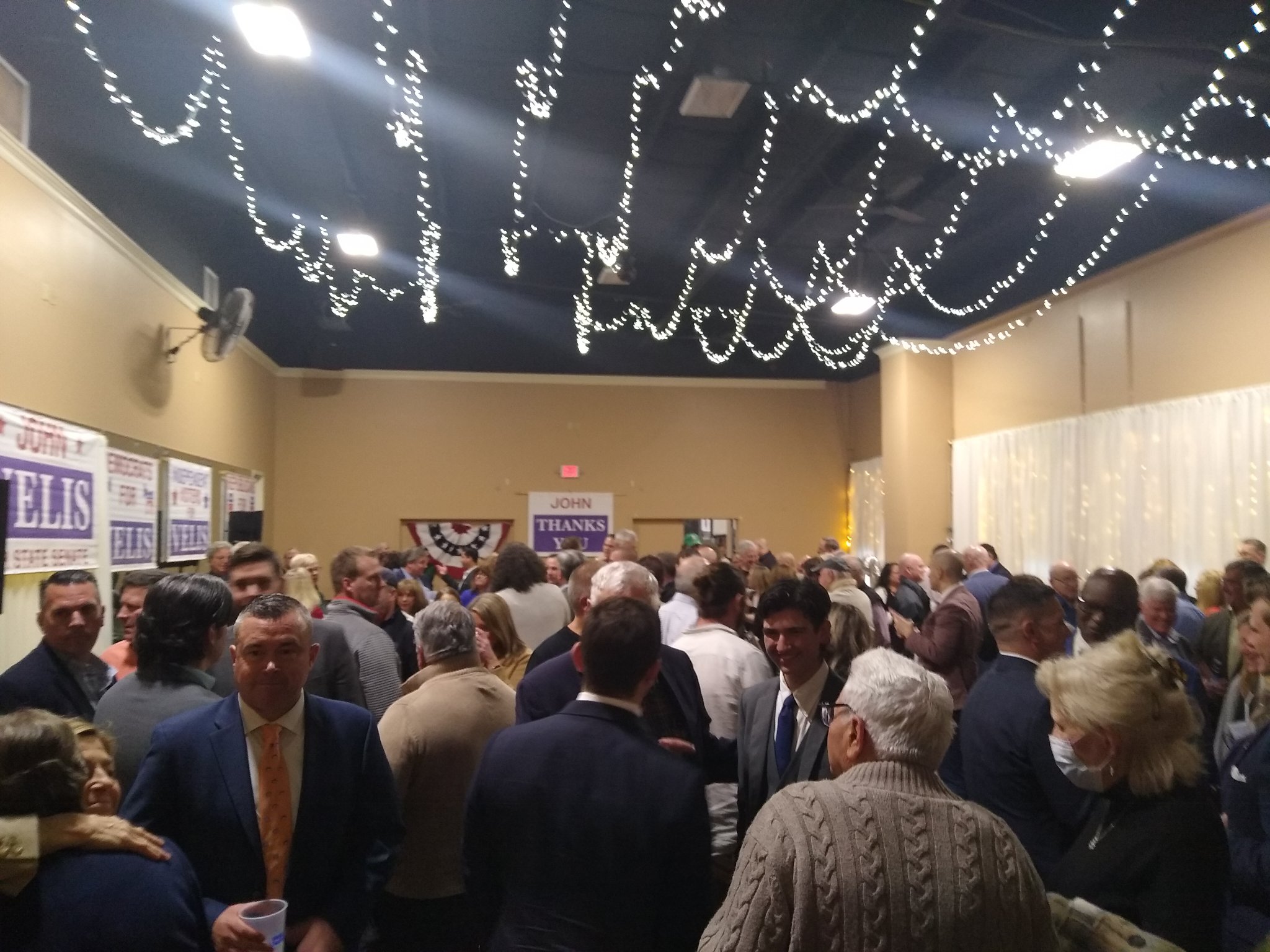 Velis’ appeal to the center is not new. He won back Westfield’s state rep seat and then the senate seat it anchors appealing to a moderate sensibility. His Whip City residency helped —a lot.

Still, in an ever more-tortured political environment, Velis will need law enforcement to beat back this year’s election challenge. Velis will likely face Agawam City Councilor Cecilia Calabrese in November. The office of the Secretary of the Commonwealth confirmed they are the only two certified for the ballot.

That leaves Velis with one of the 413’s few heated general elections. The few Republicans filing for local contests are largely ciphers so far. The main exception is Ludlow School Committee member James “Chip” Harrington running again for state rep. But since becoming a Republican in 2016, Harrington has eschewed the party’s hard right. 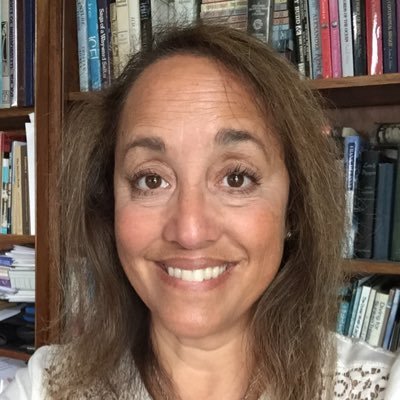 Will Calabrese be a challenge for Velis? (via Twitter/@CeceCalabrese)

Calabrese wields a much sharper conservative edge. So far, she has little money, but she has already fired off rounds of red meat. She shared a Howie Carr post on Facebook announcing Diane Wilkerson’s apparent return complete with the infamous picture of Wilkerson stuffing her bra with cash. Calabrese used the non-sequitur to declare Beacon Hill has enough Democrats.

Velis’ strong support law enforcement should help deflect such incoming. Yet, he still needs Democrats in Easthampton and Holyoke to turn out if Calabrese catches fire.  Enter his balancing act.

Velis, a JAG officer, has long had more of a focus on veterans issues. Indeed, he’s on the conference committee trying to pass reforms to the Holyoke Soldiers’ Home. He referenced a conversation with a servicemember in his remarks in which he asked what the country’s biggest threat was. Though to his surprise, the answer was not terrorism or a foreign adversary.

“His response was us, ourselves,” Velis said. Somebody in law enforcement told him the same thing.

“So, my political DNA, what I am about at the most fundamental level, is bringing people together,” the senator continued. In office, he insisted, “every time a single vote comes up. I asked myself one question. Is this a good idea? And is it in the best interest of my constituents?” 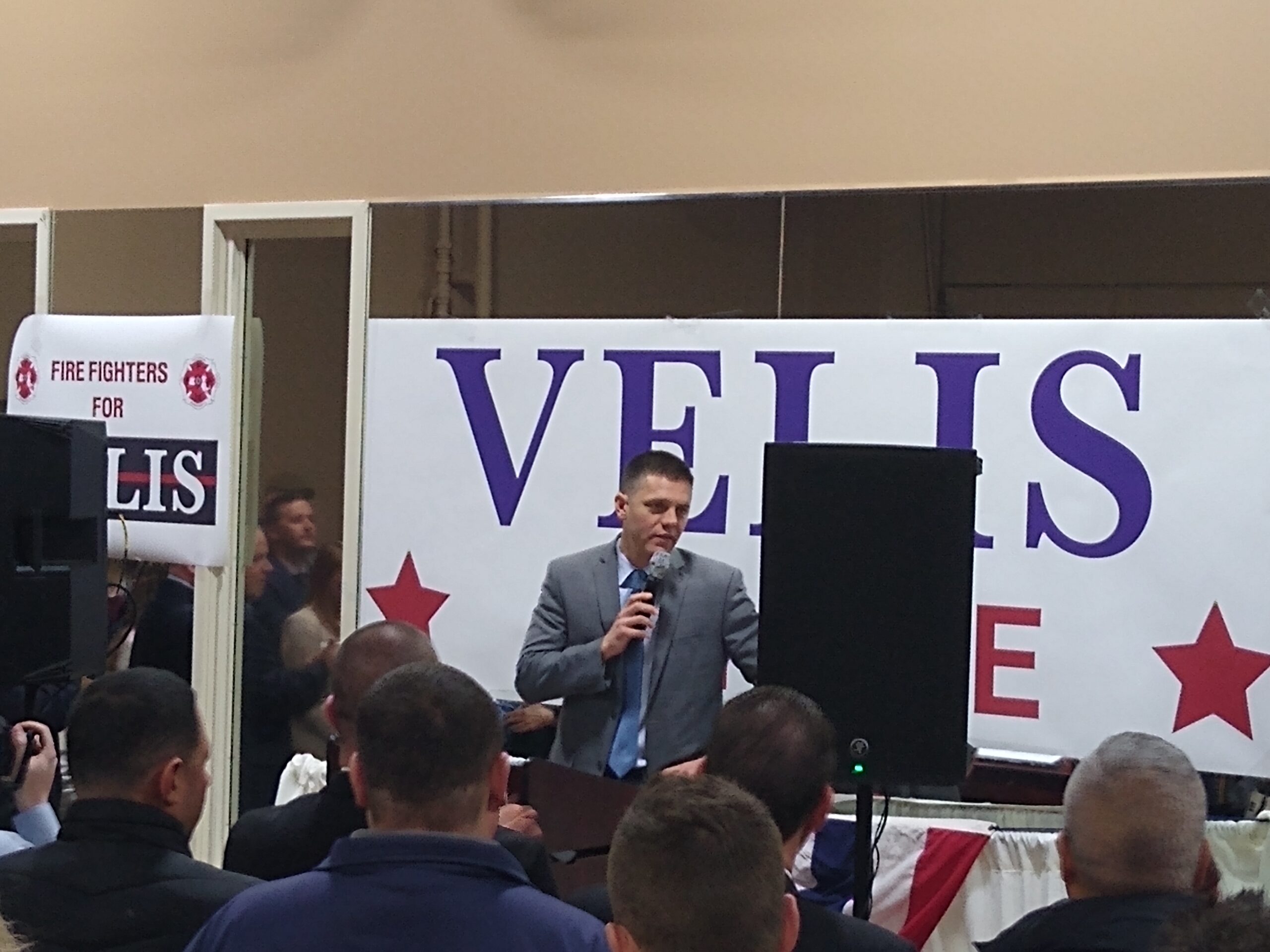 Previous Velis grey suit edition. Is past to be prologue? (WMP&I)

His appeal to moderation may ring hollow to some progressives. But if he holds enough of them and his police friends, he has another audience: his colleagues. Why else speak up for the colleague that incensed his police allies? If law enforcement feels they have received a bad shake, so too, may many legislators seeking reform.

If he can walk this thin blue line, he will win reelection and go back to open arms on Beacon Hill in January.