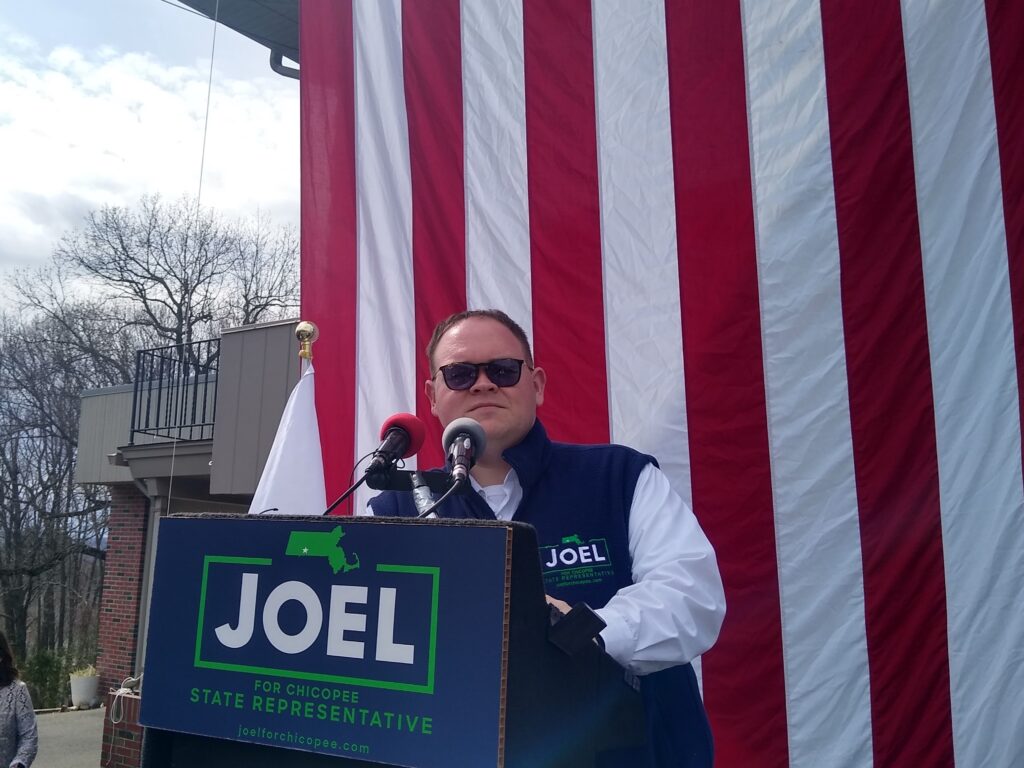 CHICOPEE—A crane hovered over a cul-de-sac punctuated subdivision. Aloft was a ginormous American flag framing the stage for Ward 1 City Councilor Joel McAuliffe’s kickoff for his bid to be the Democratic nominee for 8th Hampden district. With Westover Air Reserve Base nearby, a C-5A Galaxy flyover almost felt imminent.

Stagecraft aside, McAuliffe’s official launch exuded a block party vibe with a grill and a band that began to jam after the speeches. This was, in its way, a show of force for McAuliffe. Besides former boss State Senator Eric Lesser, who introduced McAuliffe, numerous Chicopee luminaries joined the candidate’s launch. This cast, especially Lesser as a living reminder of McAuliffe’s state political cred, fed into the pitch.

“I’m running for state representative because I have the right kind of experience to make sure Chicopee gets its fair share on Beacon Hill,” he said.

Technically, this was McAuliffe third public outing as a rep candidate. The first was his announcement at City Hall where he has served since defeating a semi-incumbent in 2017. At the second event, McAuliffe collected endorsements from School Committee members including Ward 1’s Tim Wagner, son of outgoing Rep Joseph Wagner.

The 8th Hampden District consists of nearly all of Chicopee save pockets of Willimansett and downtown. In February, Wagner, the dean of the Western Mass delegation, said he would not seek another term.

Ward 2 Councilor Shane Brooks and 2021 Council runner-up Shirley Arriaga are also running for the Democratic nomination. Independent Sean Goonan has announced a bid. Patrick Deitner has filed as a Republican with the Office of Campaign & Political Finance.

Attending Saturday’s kickoff were the younger Wagner and representative of the numerous and politically powerful LaFlamme family. City Treasurer Marie LaFlamme, City Council President Frank LaFlamme, Wagner and several other elected Chicopee colleagues. Allies of Mayor John Vieau cheered McAuliffe on and later munched on hot dogs and hamburgers. Such establishment support stands out after what even ardent supporters acknowledge was a rocky start on the Council four years ago. 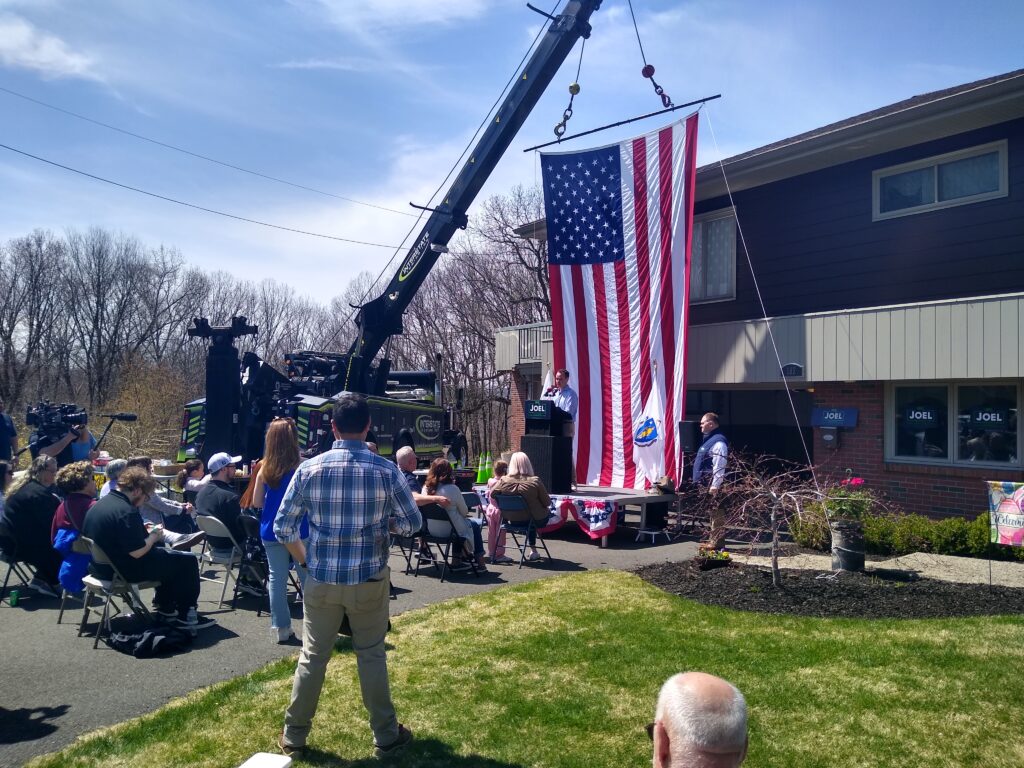 Senator Lesser warming up the crowd for his former aide, who looks on. (WMP&I)

The full campaign finance picture is still coming together. As a state employee, McAuliffe could not raise money for himself. Since leaving Lesser’s office this month, McAuliffe has stepped up those efforts.

The campaign told WMP&I that in addition to over $4500 he transferred from his city campaign account, McAuliffe raised roughly $10,000 since organizing with OCPF on March 28. With few expenses expected before April 30, his state account should have over $15,000 squirreled away by month’s end.

These flexes serve a purpose: consolidate scant public and media attention before the September 6 primary. Some of it is just McAuliffe’s tendency to throw himself into campaigns with abandon. As attendees mingled, a camera roamed, filming testimonials. Such is easily imaginable for his Council races, too.

Yet, even flush and well-produced campaigns falter.

Both Arriaga and Brooks have penciled in launches the week of May 9. Arriaga, who did not immediately respond to a request for comment, could benefit from Chicopee’s recent if fitful jolt toward electing more women and Hispanics. She had about $1000 in the bank as of her March report. Unlike McAuliffe, had no leftover funds from the 2021 municipal campaign.

Councilor Brooks will hold his kickoff next month. (via Facebook/Brooks campaign)

Brooks told WMP&I he is still setting up his campaign committee. He will report fundraising with that filing. Brooks served as Council President for a term and has run for mayor, ensuring citywide name recognition.

“I’m very lucky in the respect I’ve been able to build a lot of relationships over the last 20 years,” Brooks texted in response to a query about fundraising and volunteer recruitment.

Despite the confidence of McAuliffe’s campaign, it would be wrong to discount this. The electorate that shows up on the primary could be difficult to predict, with varying influence from other state and local races. A nasty turn in any race can steer it toward the unpredictable.

Publicly at least, McAuliffe is avoiding acrimony and maintaining the sunny demeanor that carried him from electoral defeat a decade ago.

“I know people are disillusioned with politics. There’s so much fighting back and forth on all sides of the political aisle,” he told his supporters. “But it remains the single most influential instrument of change around.”