Live from the Stump, It’s the Emerging Tone of the Democratic Primary…

NORTHAMPTON—In the 2014 primary, the attention was on the gubernatorial race. Before the convention culled the herd to three candidates, there were five running. There was a race for lieutenant governor, too but the eventual winner was not terribly surprising.

This time around, there is a lot more attention the race for gubernatorial understudy. Three legislators, a mayor and a business owner are jockeying for the right to rise and fall with their party’s gubernatorial nom, whoever that may be. During a forum several described as the quintet’s first in-person faceoff, the nature of this race and the attention it receives are coming into focus.

Make no mistake. This observation does not imply Attorney General Maura Healey has the nomination in the bag. Despite having a fraction of Healey’s campaign war chest, Boston Senator Sonia Chang-Diaz has shown little sign of backing down. While few should take the race for granted, how Chang-Diaz would pull it off is anything but unpredictable.

Chang-Diaz was at the forum, too. Healey had been invited, but a scheduling conflict kept her from attending according to her campaign. Noho Dems Chair Elizabeth Silver confirmed the same. 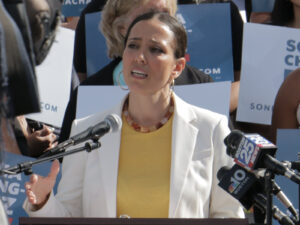 Were Chang-Diaz to win, it would be by running to Healey’s left and against Beacon Hill’s inertia. The latter is a classic Massachusetts strategy, however, one Healey herself used in her AG race eight years ago.

“When it comes to winning real change for our state thought, our biggest obstacles are not ones of natural resources or technology or know-how. Our biggest limiters are not even public opinion,” she said. “Our biggest limiter is a lack of courage and urgency from our elected officials.”

By comparison, what makes the LT’s race unusually attractive is it fits no simple narratives. That is partly because there are more candidates. Biographies and resumes feature prominently. Promises of regional equity are a staple of candidate forum in Western Massachusetts. They all agreed criminal justice reform was a work in progress and mostly supported an agricultural workers rights bill. East-West rail was a hit among the candidates, even if it was a layup for Lesser, who has championed the issue since his earliest electoral day.

Broadly speaking, they all agree that the office is to be a partner to the governor, especially as a conduit to local government. How they would use an office whose only constitutional duty is chairing the Governor’s Council is another variation.

With four sitting electeds in the race even the resume difference will require some nuance. It is certainly leaves a space Bero, who once served on a Carlisle town board, is hoping to utilize. His answers returned to his private sector experience. Both at the forum and in prior interviews, he said concerns about small businesses surviving the pandemic inspired him, in part, to run for lieutenant governor.

Among the more seasoned pols, there were appeals to specific experience. For example, Lesser pointed to both his early activism in local government and his experience working in the Obama White House. 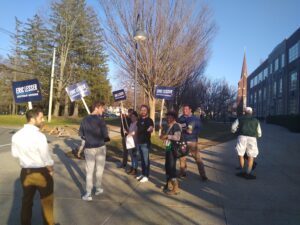 Lesser brought a team of his own to hold signs to the event. (WMP&I)

“We’re electing a team to be a Democratic ticket in November and then to govern as a team after that,” he said. Lesser noted that he had been at the center of contentious Beacon Hill negotiations and that his federal background would be helpful with billions pending from the federal infrastructure bill.

Lesser also plugged his geographic base in Longmeadow as something that would benefit the region. Specifically, he noted how Greater Worcester has gained from having lieutenant governors from the area. Worcester has seen considerable growth, especially downtown, and exceeded its previous population peak per the 2020 Census.

Geography was also Hinds’s mind and he, too, talked about a past life in other settings, namely the United Nations. However, he also raised a recent incident in his district to illustrate his reformist credentials.

Pittsfield police shot and killed Miguel Estrella last amid an altercation during a mental health call. Hinds described Estrella as doing “everything we asked of him.” Checks from mental health professionals instead quelled previously episodes. One with law enforcement had ostensibly ended his life.

“On three previous occasions they were there to answer the phone and saved his life and that night, two Friday ago, the outreach workers were not available,” he said. “It is such a stark example of why you need, in the first instance, someone who has the training and maybe doesn’t have a gun on their side.”

It was realtalk often absent from such forums.

Gouveia struck a similar tone. She pointed to health and economic inequities she saw growing up in Lowell that grounded her commitment to battling inequities. Her family was able to lay a foundation to survive economic tumult in the 70s and 80s.

“That was not the case for far too many of my neighbors whose families really struggled with the indignities of intergenerational poverty, structural racism, xenophobia and the impacts of substance use disorder and domestic violence,” she said.

Despite some moderate leads in the race, Driscoll was probably the least known here. Hinds and Lesser are from the 413 and Bero and Gouveia have been campaigning for months. But Driscoll was able to draw from the generalist position a mayor is necessarily in, touching on schools and public safety reform.

In a nod to local identity, which is strong, however provincial, in Western Mass, Driscoll affirmed her municipal experience was apt.

Mayor Driscoll plugged her municipal background to underscore for the LT’s more recent role as a liaison to cities & towns. (via Twitter/@MayorDriscoll)

“I know I’m not the local hometown gal, but I want you to know Icare about hometowns,” she said in her closing statement. “When you’re a mayor, especially someone who’s also been a deputy city manager, I know the importance of local government.”

Driscoll ticked of a number of local government functions from parks to schools that affect voters’ daily lives.

The race has over four months left to it and the convention could winnow the field. Its field stabilized only early this year so the tone and tenor of contest itself could yet change. Ideology will be a factor, but probably not a strident one.

For example, around the time of the Northampton Forum, progressive groups’ candidate questionnaires began coming out. A summary of Our Revolution fact sheet’s shows Driscoll with no specific mark on raising the charter school cap. Her four opponents all clearly opposed it. In 2016, voters rejected a ballot question to raise the cap on charter schools.

Educational activists began chewing over Driscoll’s position after your editor-in-chief tweeted about it. Not long after, Driscoll’s campaign reached out to WMP&I to note she had given a fuller answer to Progressive Massachusetts (PM). Driscoll had told PM she considered the matter settled with the 2016 ballot question. Her campaign also observed Driscoll supported more charter school accountability.

Overall, this state primary may not demand orthodoxy anywhere on the ballot. This is not surprising in the context of history. Laughs would greet anybody who today would say Deval Patrick was a lefty governor. However, during his 2006 campaign he was clearly identified with that end of the spectrum. What connects that perception then to his time in office, however, is a reformist mien.

That will come as a disappointment to activists and organizers who had hoped to push Massachusetts in the directions Pacific states and more recently New York have gone. That does not mean the state is a lost cause. A subtler progressive revision of the commonwealth will arise with effective and reformist government.

That former is key. Voters must choose who in the lieutenant governor’s race—and other elections—is able to make government work as well as possible.