UPDATED 6/1/22: To note Lederman’s statement remaining president into 2023 after succeeding Williams. After this article was published, it was discovered the legislature had actually passed the home rule petition that would add special elections to Springfield’s charter. A new article will post later today, but this article has been lightly edited to reflect this reality. 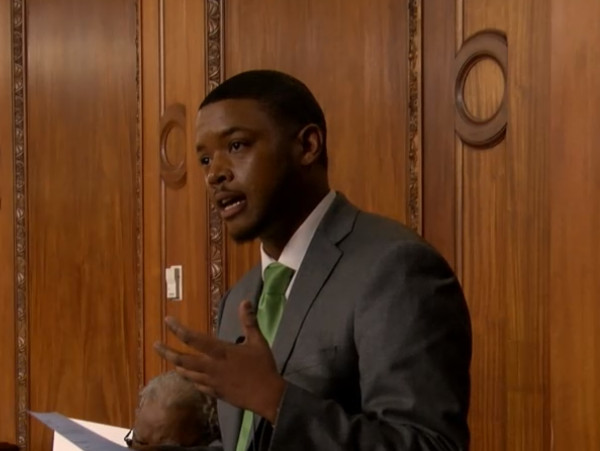 Springfield City Council President and Ward 5 Councilor Marcus Williams will resign both positions, thus triggering a new succession process. Just over a year ago, Williams oversaw the filling of now-State Senator Adam Gomez’s Council seat. Due to an oversight in the law that revived ward representation, vacancies had been filled either by the contender the previous election who got the next most votes or by vote of the full Council if no eligible runner-up exists.

Such outcomes without a fix had been councilors and city lawyers’ radar for years. Rarer, however is the resignation of a sitting council president. The Council’s rules automatically confer Williams’ powers onto Vice-president Jesse Lederman. However, councilors and the Law Department will have to consider whether a formal election of a new president is necessary.

Williams said Tuesday he was resigning as part of a planned move to Georgia and his career in the philanthropic sector.

“There have been many days and thoughts leading up to this decision and it was not an easy one by any stretch of the imagination,” Williams said according to WAMC.

“Springfield and Ward 5, specifically, I hope I made you proud,” he added.

Williams had issued an embargoed release announcing his resignation late Tuesday WWLP briefly reported without rejecting the limitation on when to report it. A copy of his May 31, 2022 resignation letter the City Clerk released to WMP&I states his departure is effective the same day.

Currently in his fourth term that began in January, Williams won his seat in 2015 overcoming one-time 16 Acres grandee Clodo Concepcion. His election was among several last decade that heralded a supermajority capable of overriding mayoral vetoes. That bloc has fractured in recent years, but Mayor Domenic Sarno’s reliable Council support remains at a low-water mark.

Williams served on the Council concurrently for one term alongside his uncle, now-State rep Bud Williams. The two were considerably different in style and substance. The younger Williams cut his political teeth on the staff of Don Berwick’s 2014 campaign for governor, rather than the electoral minefields of Mason Square, the historical heart of Springfield’s Black political leadership.

The Ward 5 councilor became the body’s president in 2021 after a brief contest to lead the body. 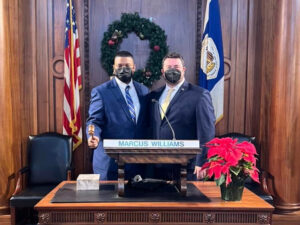 Lederman & Williams after the Council’s inauguration in January. (via Facebook/Lederman official)

Council rules state that the vice-president shall act as the president if they are absent. At a minimum, Lederman, an at-large councilor, shall act as the body’s president for now. If and when a vote for president happens, City Hall sources say he has seven votes for full election as president. On Wednesday, after this story was published, he announced he had unanimous support to remain president in 2023.

Lederman worked with Williams on Berwick’s campaign. The two are allies and share many of the same values and perspectives, ensuring a largely smooth transition.

“City Council President Marcus Williams has been a unifying and empowering leader for our council body, and a studious representative for the residents of Ward 5 and the entire City of Springfield,” Lederman said in a prepared statement. “Through perseverance he rose to the occasion to become the right leader at the right time and has notably made good on his promise to put people before politics. He is also a dear friend, and I wish him success in all his future endeavors.”

Stylistically, Lederman and Williams differ somewhat, ensuring some changes. The body has yet to return to in-person meetings, which Lederman will almost certainly oversee. Springfield is one a few fully remote city councils in Western Massachusetts. It is the largest city in the commonwealth to remain fully virtual.

Council rules do not have the force of law. Thus, it is not clear whether Lederman will inherit the few statutory powers the council presidency has. For example, it is not certain a Council veep filling in for the president could become acting mayor should the mayor bail as the charter otherwise envisions. Other than that, the charter’s only mention of the office is to state its existence and annual election by the Council.

While councilors expressed discomfort with choosing Gomez’s replacement—as they will likely again choosing Williams’s successor—they are in effect electing a councilor. That person will assume the full powers of a councilor asterisk-free.

Springfield Councilors have to fill vacancies here once again. (WMP&I)

In his statement, Lederman said he would follow the same process Williams used last year. As in Gomez’s last election to the Ward 1 seat, Williams faced no opposite in his last election last November. The Clerk will present the Election Commission with his resignation and the Commission will confirm no qualified runner-up exists. The Clerk then turns the issue over to the Council.

Last year, applicants submitted letters of interest to the Council office. Depending on the interest, a Council subcommittee could narrow the list before presenting the list to the full Council. Interviews and a vote would follow in open session. Redistricting in for Springfield ward seats was minimal, but the old maps would likely control residency eligibility for candidates.

In contrast to the Gomez situation, which saw his father Gumersindo Gomez chosen, however, this process could be much more open-ended. While the senator’s resignation from the Council was abrupt, nobody expected him to seek reelection to the Council while remaining in the Senate. A race for his seat was already forming. It just morphed into an appointment process. While there were rumors Williams would make an early exit, it had not yet animated the city’s political animals. Plus, much more of the current term remains.

The distance from that election would have only increased the unease councilors have about picking a colleague. However, after this article originally posted, it was discovered that the legislature had passed Springfield’s home rule petition for special ward elections to virtually no fanfare.

Absent that, the situation would again highlight the need to reform succession on the Council. While succession in the council presidency is murky, a full vote of the Council can dispel any doubt. The law on ward succession was quite clear, but the status quo was unappealing.

The old language in the charter dates to when the Council had only at-large members. There are currently five out of the body’s 13 members.  In at-large races, all candidates essentially compete against each other for however many at-large slots exist. Therefore, at-large runners-up possess some democratic legitimacy. By contrast, losers in ward races do not and Council-appointed members certainly do not. While a council appointment was and is possible for at-large vacancies, there is no record of it ever happening. There will soon be two Council-appointed members in roughly 18 months.

Interest in a special election for Council ward vacancies—and their School Committee analogs—manifested when the issue first came up in 2010. One year after ward representation returned, then-Ward 6 Councilor Keith Wright resigned. At the recommendation of the Springfield Law Department, his seat went to person he defeated in 2009, Amaad Rivera.

Although Rivera’s installation veered into an embarrassing episode of community dissent, it revealed a solution. Both Boston and Newton, the latter having fewer people than Springfield, hold special elections for district Council vacancies. For Springfield to do that, it will likely need a home rule petition to the legislature.

Efforts at reform have ebbed and flowed, running aground legalism in City Hall or inaction on Beacon Hill. However, with 19 months left in Williams’s term and councilors no happier about the process, pressure to amend the charter would have only mounted had the legislature not acted.