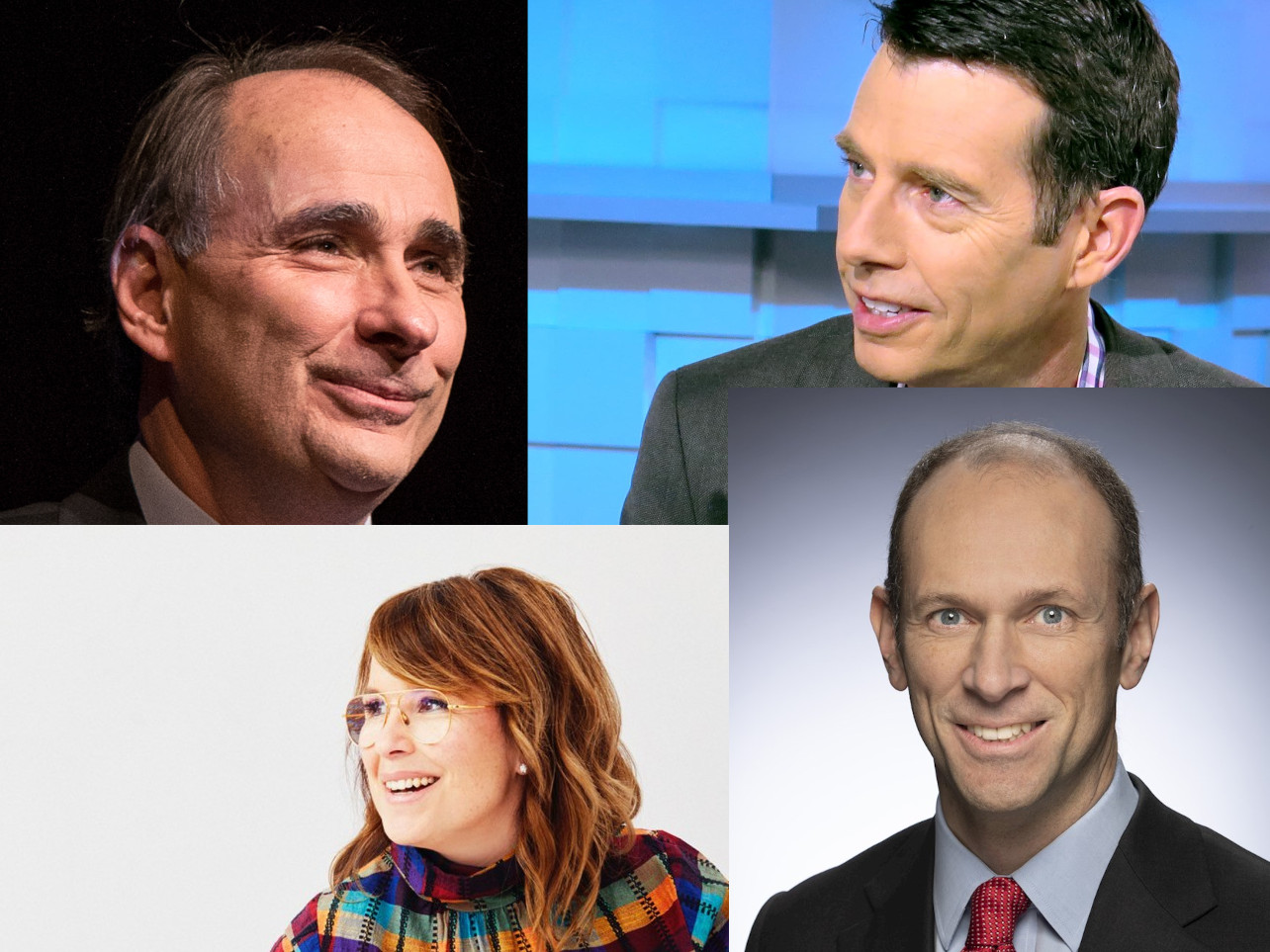 Not quite the most ambitious crossover event ever, but assembly of Axelrod, Plouffe, Goolsbee & Mastromonaco for one event says something. (created via various public image sources)

Longmeadow Senator Eric Lesser has led the money race for much of the campaign to be the Democratic nominee for lieutenant governor. But at the end of May, he may supercharge that a bit with a fundraiser featuring friends of his from the Obama Campaign Universe (OCU). Topping that list is former President Barack Obama’s top political advisor and Lesser’s ex-boss David Axelrod.

Upon graduating from college, Lesser joined the then-US Senator’s presidential campaign. After Obama won, he became Axelrod’s assistant. Yet Axelrod is not the only part of the Obama alumni network, which Lesser likens to a family, pulling for him. The former president’s Council of Economic Advisors Chair Austan Goolsbee, campaign manager and senior advisor David Plouffe and deputy chief of staff Alyssa Mastromonaco also headline the invite for the May 31 virtual event.

“It’s like getting the band back together,” Lesser said in an interview. This is the “original crew” of Obama 2008 he said.

Fifteen years on from the start of his campaign’s launch, Obama’s win may now look to have always been inevitable. It was not, even as his presidential bid started a credible endeavor. The victory solidified bonds among early supporters. Lesser and others in the network, many of whom have Massachusetts ties, remain in tough via texts and visits when schedules overlap.

“It’s not even being viewed as a fundraiser. It’s more like a reunion call,” Lesser explained. Via the Zoom fundraisers, his local supporters can get their own sense of the relationships. “People will swap stories. Take questions from people.”

Despite a relatively brief career in Washington, Lesser quickly made an impression in Washington. He had cameos in Marc Leibovich’s book, This Town. Lesser’s relationship with Axelrod was fodder for The New York Times. But at the center of it was those personal ties he made on the trail. Lesser and Axelrod have remained close over the years. The latter has hosted fundraisers for the senator several times since 2014. 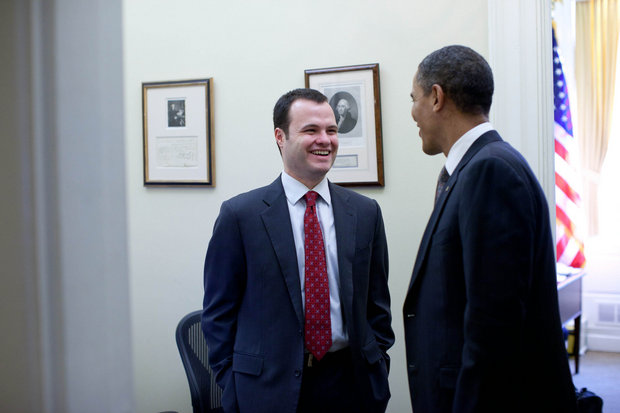 Eric Lesser in 2011 meeting the man who brought the team together originally–Nick Fury, er President Obama. (via White House/Pete Souza)

The headliners for this Tuesday’s fundraiser have all hosted events for Lesser before. A Washington fundraiser early in Lesser’s electoral career included Axelrod, Mastromonaco and Plouffe as hosts.

The founding members of the OCU have hardly been Lesser’s only well of campaign finance. As a double graduate of the only university that appears in the Massachusetts Constitution, Lesser developed countless contacts, many overlapping with national Democratic politics. Plus, he has a donor base in and around Western Massachusetts. Indeed, former Longmeadow Democratic Town Committee Chair and State Committee member Candy Glazer is on the host list for Lesser’s Tuesday funder, too.

To put this in context, using a very crude metric, of the $2.8 million Lesser has raised since entering political life in 2014, $2 million came from Massachusetts residents (at the time of donation). In the lieutenant governor’s race, Lesser is leading the fundraising pace. He currently has over $1 million in cash-on-hand or roughly three times what his closest rival, Senator Adam Hinds, has in the bank.

Still, accessing the Obama alumni network for fundraising should not be minimized. Not only does it benefit Lesser in the primary, but it could help his gubernatorial running mate. Though parties nominate the governor and lieutenant governor separately in Massachusetts, they run as one ticket in the general election. Both members of the ticket have a $1000 annual cap per contributor.

While traveling for fundraisers is coming back in vogue, the rise of Zoom funders has advantages. The state Democratic convention is only four days after Lesser’s event. However, he won’t have to come off the trail to raise any extra bucks with his former colleagues in and around the the Obama campaign an White House. 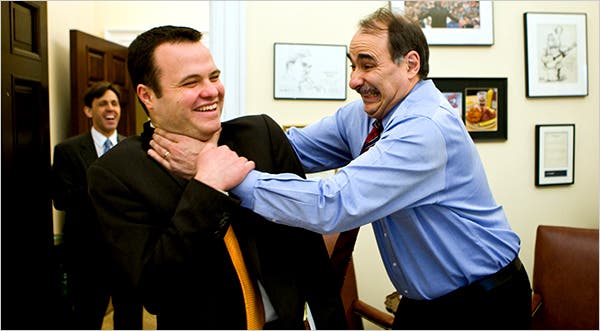 These relationships have endured. Lesser keeps in touch with Axelrod (or “Axe,” as others often call him) and has sought advice from his old boss even after both left Washington. Axelrod ultimately returned to Chicago where he runs the eponymous university’s Institute of Politics (for now). He also hosts the Axe Files, a podcast interview show produced in conjunction with CNN.

Lesser also worked for Goolsbee. In fact, Lesser became Axelrod’s assistant only after the latter won a bidding war of sorts with Goolsbee during the presidential transition. Goolsbee told WMP&I in 2015 that for him Lesser functioned more in a strategic communications role than assistant.

Others on the host list are more Lesser’s contemporaries. Mastromonaco had been the youngest woman to serve as a White House deputy chief of staff, partly overlapping with Lesser’s later time in the executive.

Mastromonaco hired Lesser as an advance staffer in New Hampshire. That led to Lesser’s now-famous “bag boy” role traveling with the eventual president and his campaign manager, Plouffe. Today, she is a contributing podcaster at Crooked Media, which other Obama alumni—who have also supported Lesser—founded amid the wreckage of the 2016 election.

Some of the ties are even closer. Matt Shapanka, now chief counsel to US Senate Rules Committee Chair Amy Klobuchar, is on the host list. In 2014, Shapanka, a Massachusetts native and Deval Patrick alum, assisted Lesser and his lawyer Cheryl Cronin during the then-senate candidate’s residency challenge.

Lesser and another host committee member, Josh Lipsky, were housemates when both landed in Washington as young staffers. Nowadays, Lipsky is the Director of the GeoEconomics Center at the Atlantic Council.

They and fellow roomies Jake Levine and Herbie Ziskend were subjects of a New York Times Magazine article about young staffers in the early Obama period. The four, all roughly the same age, have remained especially close. All three have traveled to Western Mass to help Lesser out during his senate campaign and have attended each other’s weddings.

“I put my heart and soul into helping support President Obama and his team,” Lesser said. “I’m grateful so many people have my back in this great endeavor.”