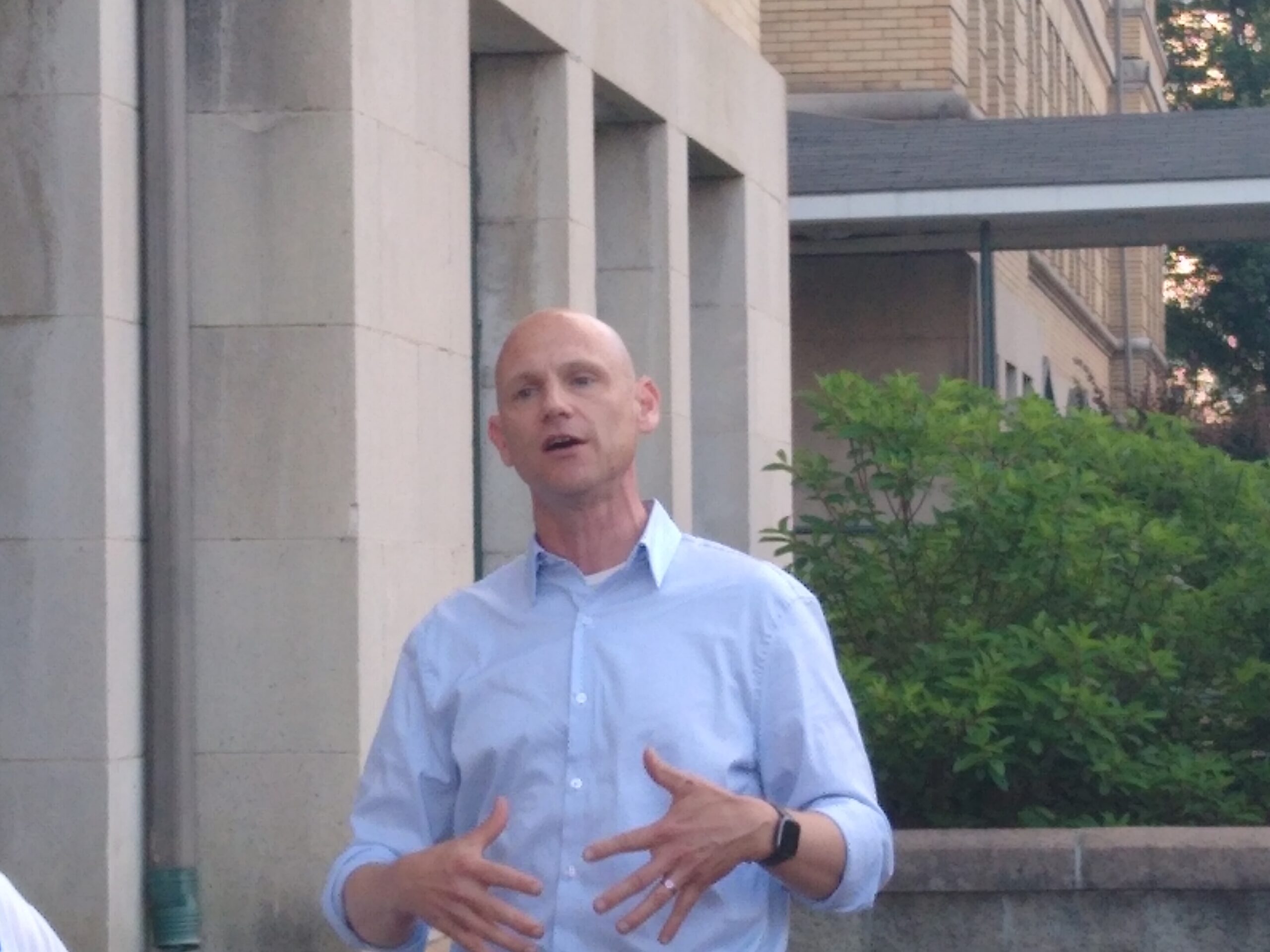 Palfrey made a splash at the convention, but can he make enough waves in the September primary? (WMP&I)

SPRINGFIELD—Some supporters of Quentin Palfrey are drawn to his emphasis of civil rights. Others like his stance on health care or climate. Many agree with his alarm about outside money in the race. Those positions, he says, show he is the most progressive candidate for attorney general. Yet, a unifying them may be something he shares with the woman he hopes to succeed: time in the office.

All three Democrats running for Attorney General in Massachusetts are accomplished lawyers. Palfrey has not spent his entire career in the AG’s office either. Nor did Maura Healey, who is leaving the office to run for governor. Many Massachusetts AGs came from the outside. Still, Healey wielded the pitch to experience in the AG’s office to tremendous effect eight years ago. Palfrey is arguing it will make him more effective.

“One of the wonderful things about the attorney general’s office, is, it has a really broad range of powers,” he said in a recent interview. “And I think it’s really helpful to have experience knowing sort of which levers you use to advance social justice.”

During Martha Coakley‘s tenure as AG, Palfrey ran the newly-created healthcare division that helped implement Massachusetts’s health reform law. That lets him talk about single-payer—he supports it—which ultimately will require legislative action to become a reality in the state.

Understanding the office can inform decision making across the office according to those who have worked there.

“It doesn’t guarantee it, nor does it mean somebody who hasn’t [worked in the office] won’t be a good AG, but there’s a lot of experience one gets,” said Jeff Clements, to whom Palfrey once reported in AG’s office and is now the president of American Promise. Though not publicly supporting anybody in the September 6 primary, Clements agreed that understanding the non-political and career attorneys and staff was very helpful for AG’s.

Palfrey is facing off against Shannon Liss-Riordan, a prominent labor attorney, and former Boston City Councilor Andrea Campbell. At the state Democratic convention, Palfrey placed a surprisingly strong second in the first round and won the endorsement in the second. Still, he has lacked financial resources both Campbell and Liss-Riordan have enjoyed during the campaign.

Conventions endorsements are little more than bragging rights, but, as a flex, it may validate Palfrey’s strategy. He has claimed the title as the most progressive AG candidate and pocketed backing from lefty groups like Our Revolution. Many activists remember his noble if doomed 2018 run for lieutenant governor against Charlie Baker’s ticket. He (and Liss-Riordan) have hammered Campbell for not disavowing a SuperPAC that backed her mayoral bid in 2021, Better Boston.

Campbell’s campaign has rejected the suggestion she is beholden to special interests. Last month, as the convention loomed, her campaign said the SuperPACs matter was a “non-issue” and “misinformation.” Indeed, Better Boston has not spent in the race as of yet. Her campaign manager, Will Stockton, claimed Campbell’s opponents were just trying to divide the party, wryly noting she raised campaign funds than her opponents many times over. 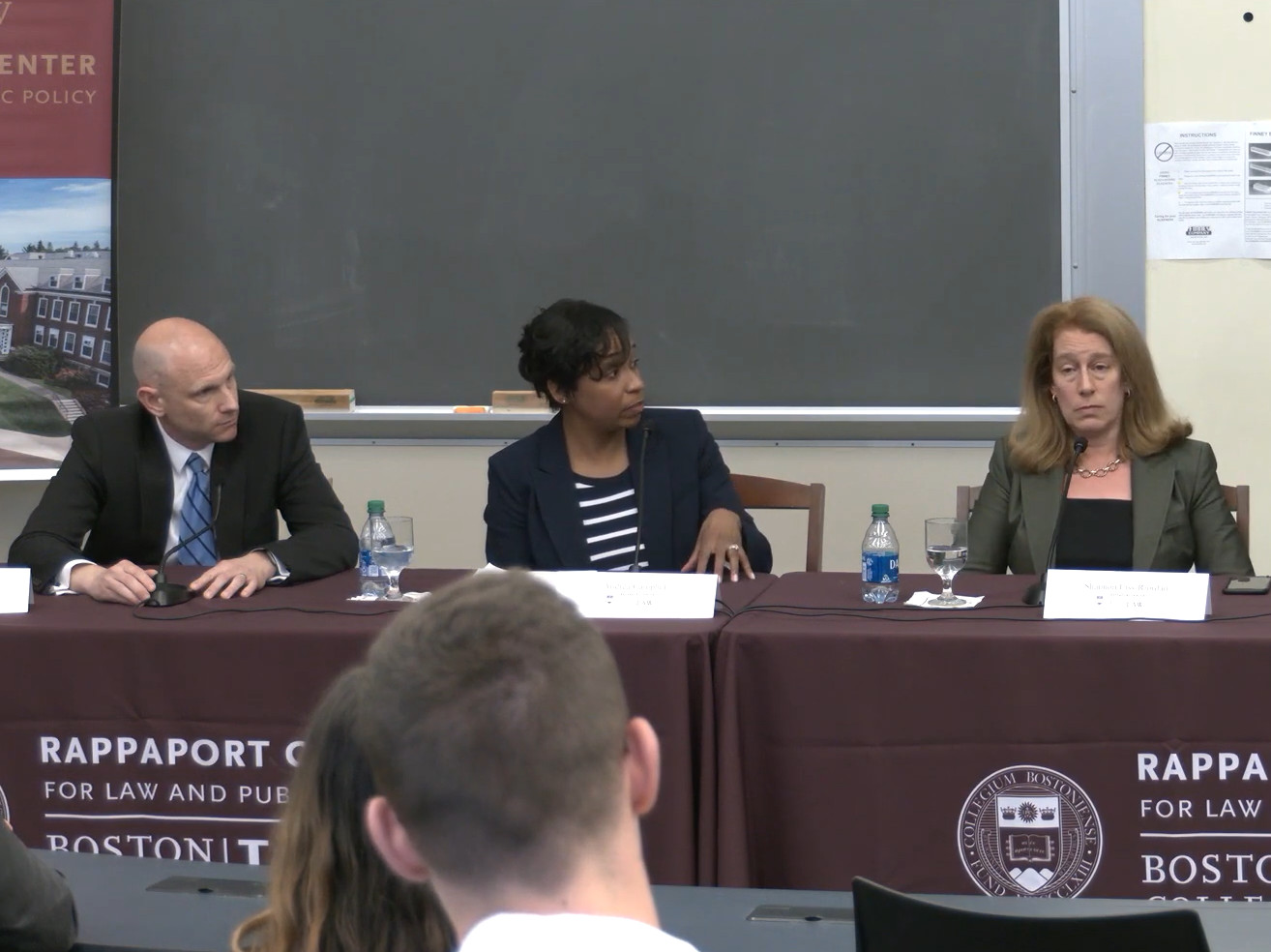 Campbell makes a point as Palfrey & Liss-Riordan listen at a BC Law debate last month. (still via YouTube/BC Law)

“We need leadership–not political gamesmanship–in the Attorney General’s office as the Supreme Court attempts to repeal civil rights, retailers take advantage of parents by raising the price of infant formula, and we reckon with the vile embrace of white supremacy as our communities recover from the recent domestic terror attack in Buffalo,” Stockton said in statement on May 20.

Palfrey has not let up.

“You can’t have Jim Walton of Walmart funding the super PAC, or Bain capital funding a SuperPAC in support of that candidate if you want the AG to stand up for the public schools and for reckoning with some of the really stunning racial inequalities in our school system,” Palfrey said, noting contributors to Better Boston.

In an interview at the Columbus Avenue Starbucks last month, Palfrey connected the dots between his career and campaign. The son of pediatricians, he grew up in Southborough, which he claims helps him appreciate the charges of Boston-centrism leveled at state government.

Palfrey served as acting general counsel for the US Commerce Department on Day 1 of the Biden administration. It was a sequel to a counsel role he held at Commerce under Obama. For Biden, he helped set up the office and settle lingering issues, such as litigation pertaining to the Census.

Some personal news: it was a great honor to be sworn in (virtually) by President Biden yesterday afternoon as part of the Day 1 team for the Biden-Harris Administration. I'll be serving as Deputy General Counsel – and for now acting General Counsel – at US Department of Commerce pic.twitter.com/jyJ2W6YMew

He came to Obama’s Commerce Department only by accident. Having worked with Democratic presidential candidates, he was in line for a gig in the Obama administration at the Department of Health and Human Services. That fit his background at the Mass AG’s health care division. While Obama’s HHS nominee was held up, Palfrey received an offer at Commerce. He also served in the White House Office of Science & Technology policy, working on jobs and competitiveness.

On the trail, Palfrey often discusses civil rights in the context of ending qualified immunity for police misconduct or education. He published a Law Review note about educational equity in 2002. Pointing the broad powers the Massachusetts AG enjoys, he said there were opportunities given the civil rights and charities oversight to make improvements. At the heart of it, though is the commonwealth’s constitutional mandate to provide education.

“The constitutional obligation to provide the freedom but the public education actually creates a duty on the part of our commonwealth to make sure that every child gets the opportunities in life,” he said. Palfrey suggested this could include issues with student debt and how municipalities are allocating education dollars.

The leak of a draft opinion overturning Roe v. Wade was a fateful reminder of backsliding that could lie ahead. Such decisions also threaten access to birth control and LGBTQ rights. The onslaught from the High Court could rival Healey’s challenge as AG staring down Donald Trump in court. While preparing to push back in federal court, Palfrey wants to look at how to apply the office within Massachusetts more, too. 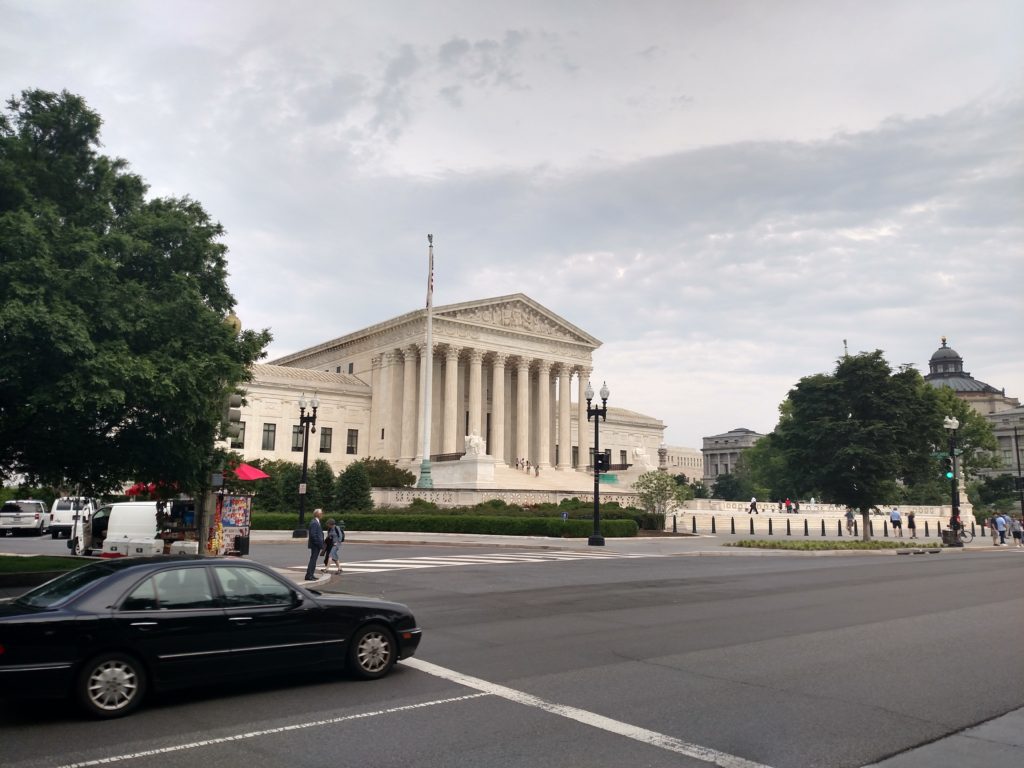 SCOTUS threatens civil and human rights gains the US has made. (WMP&I)

Last month in Northampton, Palfrey praised Healey’s legacy. Yet, he reiterated his desire to leverage his understanding of the AG’s office to get more out of it. He has said he would direct all divisions to consider issues such as climate and civil rights. He likened it to President Joe Biden’s directive that federal agencies to consider climate in their actions.

For example, he said the AG’s oversight of insurance and charities could play into expanding health care access, mental health services and college affordability.

The focus on civil rights has become especially pertinent for LGBTQ activists. Despite Massachusetts’s strong antidiscrimination laws, concerns are flaring anew. Republicans in Florida and Texas have summoned the ghost of Anita Bryant’s career to revive bigoted accusations of grooming children against the LGBTQ community.

All Democratic AG contenders have assured solidarity with this community and others. Palfrey supporters have pointed to his willingness to listen and develop a platform from there.

“Quentin goes out of his way to listen to the communities he’ll represent as Attorney General and learn about the issues we face, which is why he has the most progressive LGBTQ policy platform of *any* statewide candidate to date,” said Halley Kelly in message to WMP&I.

Kelly, who holds an at-large nonbinary seat on the Democratic State Committee, also noted Palfrey’s rejection of big money in the race. 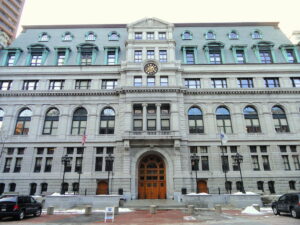 The Adams Courthouse in Boston. Palfrey says he is also eager to focus on making progress before the state’s top courts. (via wikipedia)

The AG also plays a role in determining what the law is. The office reviews the legality of town by-laws—but not city ordinances. State law does let the attorney general intervene to enforce local charters, however. This happened recently in Springfield when it took a Supreme Judicial Court ruling to implement a duly passed ordinance.

On the question of intervening, he said there must be a balance between democratically-elected local officials and the commonwealth’s law and values.

“You need to be thoughtful and fact specific and context specific and you need to have some humility. You don’t always want to impose statewide kind of view on a local community,” he said. “But we need affordable housing and climate action, police accountability, so sometimes there’s going to be policymakers at odds.”

Despite the win at the convention, Palfrey has a long road ahead. All three candidates clearly sound like Democrats. Yet, as Palfrey states on the trail, there are real differences in the race.

The exact mood of the electorate is in flux. Democrats are heavily favored in Massachusetts’s general election, but the primary could surprise. Voters may turn toward the political center or toward a voice from outside government, to Palfrey’s detriment. Alternatively, voters could take him up on his platform or, like they did eight years ago, pick the candidate with roots in the office.

“I think I’m the most progressive candidate in the race, but I do encourage people to ask hard questions about whether the candidates they’re talking to actually share their values,” he said.