A REN-dorsement for Lesser, As Battle for Number 2 Gets Hotter… 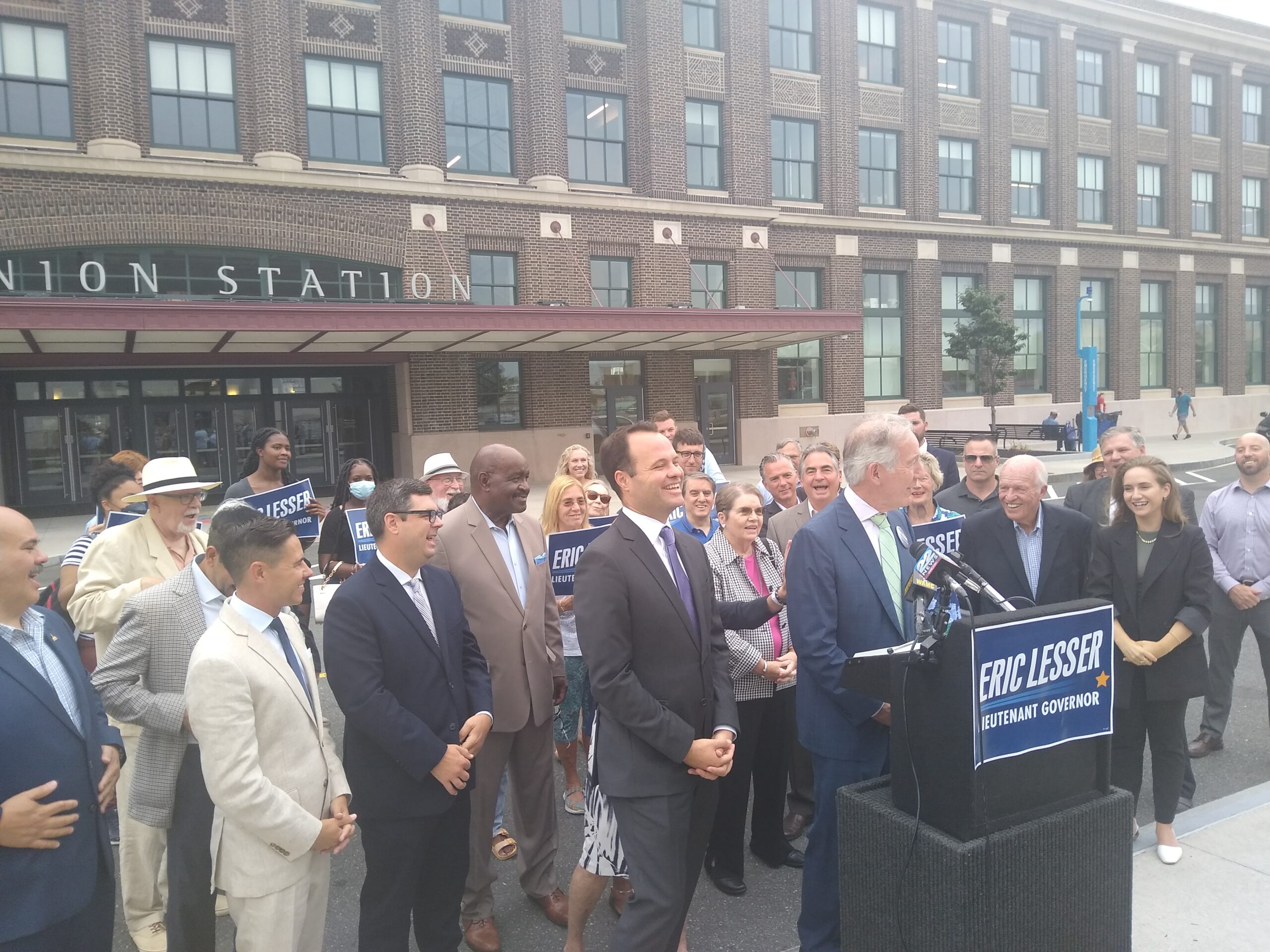 SPRINGFIELD—Amid a tight battle for his party’s nomination for lieutenant governor, Senator Eric Lesser received the endorsement of the region’s most senior elected official, US Representative Richard E. Neal. Framed by Union Station, which Neal had long sought to renovate and from which Lesser has long hoped frequent Boston-bound trains would depart, the Longmeadow Democrat largely solidified his base in the contest.

Lesser’s opponents, Salem Mayor Kim Driscoll and Acton Rep Tami Gouveia, have planted flags out here as well. But Neal’s endorsement and the full-throated backing of other officials here likely underscores that the race for the low-profile office shall become hottest in places without a hometown guy or gal on the ballot.

Crowded onto a strand of Frank B. Murray Street—as a public building, campaign events too close are verboten—Neal and others emphasized the importance of having a figure from Western Massachusetts in statewide office.

“As much as we talk about achievements, which I think in the end is what we should be measured by, it’s also about character and temperament and skill set and patience,” Neal said. “He has deserved an A in all of those categories.”

Joining Neal were the mayors of Chicopee and Springfield, outgoing Governor’s Councilor Mary Hurley, former Hampden Sheriff Michael Ashe, and reps from up and down the Valley, city councilors and former officials. Both mayors, John Vieau and Domenic Sarno spoke, as did Hurley and Springfield Reps Carlos Gonzalez and Bud Williams.

The event even brought together the Democratic rivals for Lesser’s senate seat, Rep Jake Oliveira and Sydney Levin-Epstein. Maintaining Swiss diplomacy, Lesser recognized them both in his remarks.

Candy Glazer, Lesser’s campaign committee chair, emceed. Formerly Longmeadow Democratic Town Committee Chair, Glazer and Neal go way back, but both have been key mentors to Lesser. A teenage Lesser cut his teeth on Democratic politics in what was then a reliably-Republican town. He later interned at Neal’s office before going on to work for candidate and then President Barack Obama. Speakers paired that experience with his time in the legislature.

Now, Lesser seeks to be the first statewide official from the Massachusetts occident in decades. He assured, as he has before, that his and his family would remain here even if elected.

“We’re facing economic headwinds right now, that are hurting people, prices of gas are going up, grocery bills are going up, housing prices are going up,” Lesser said. “We need the leadership at the state house that lives here. That’s from here, that has represented the communities here.” 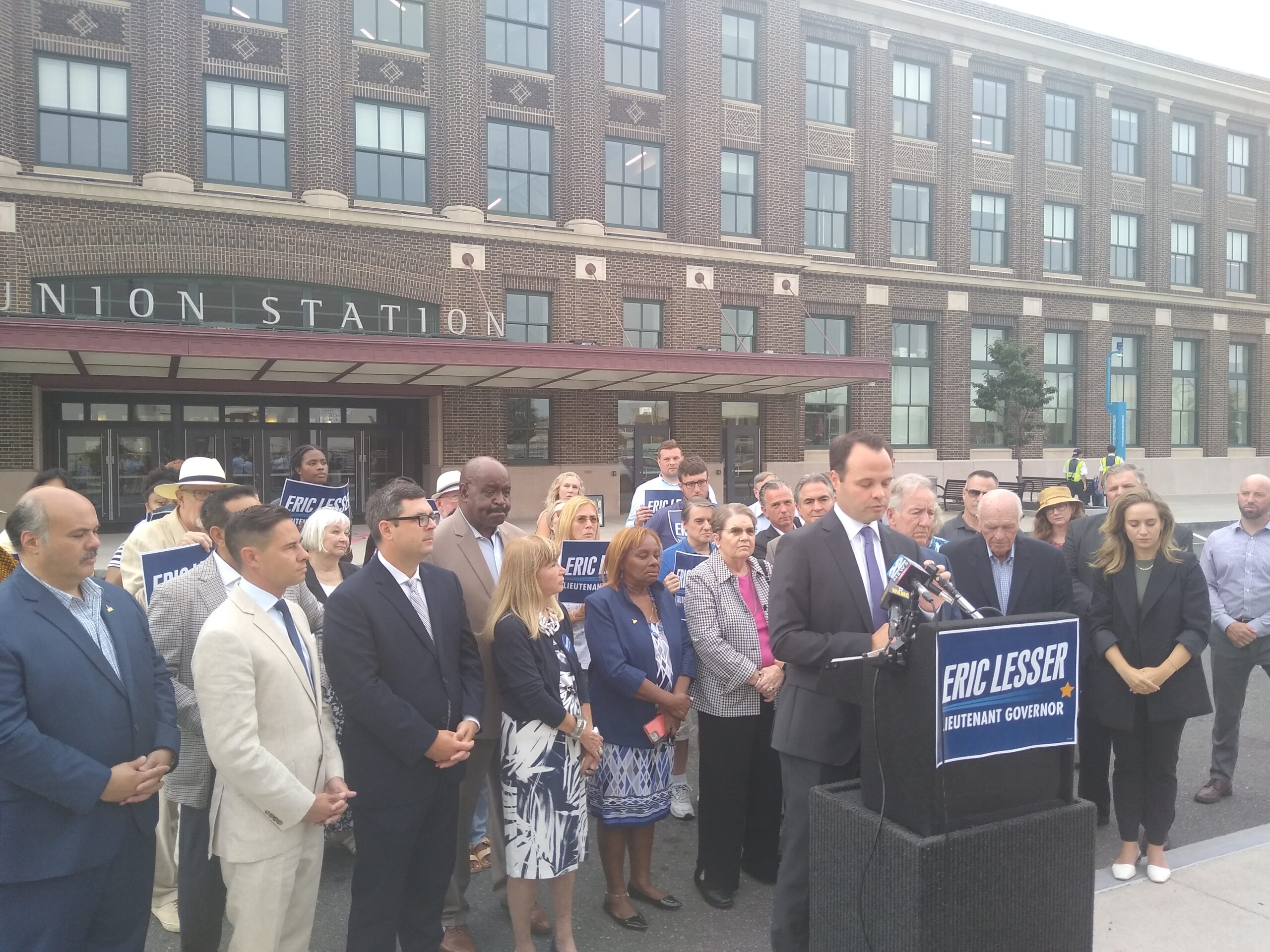 It has been 50 years since a lieutenant governor hailed from Hampden County (Jane Swift became LG by way of the Berkshires). The last statewide figure from Springfield was attorney general Tom Reilly, but he ran as a Middlesex District Attorney. Greater Worcester, namely Tim Murray and Karyn Polito, has benefited from having regional advocates in office.

Listing federal pandemic programs, recovery funds and the infrastructure bill, Neal said there was no excuse to avoid investment in the 413.

“That’s all the more reason why we need people inside, offering that advocacy,” he said.

The context was East-West rail, a cause Neal has taken up, especially since Union Station opened a few years ago. Lesser’s command of the details has mattered, Neal explained.

“We have received a number of reports on East-West [rail], and I’ve always been very impressed with his commentary on it, because it demonstrates knowledge of what’s actually happening,” he said. 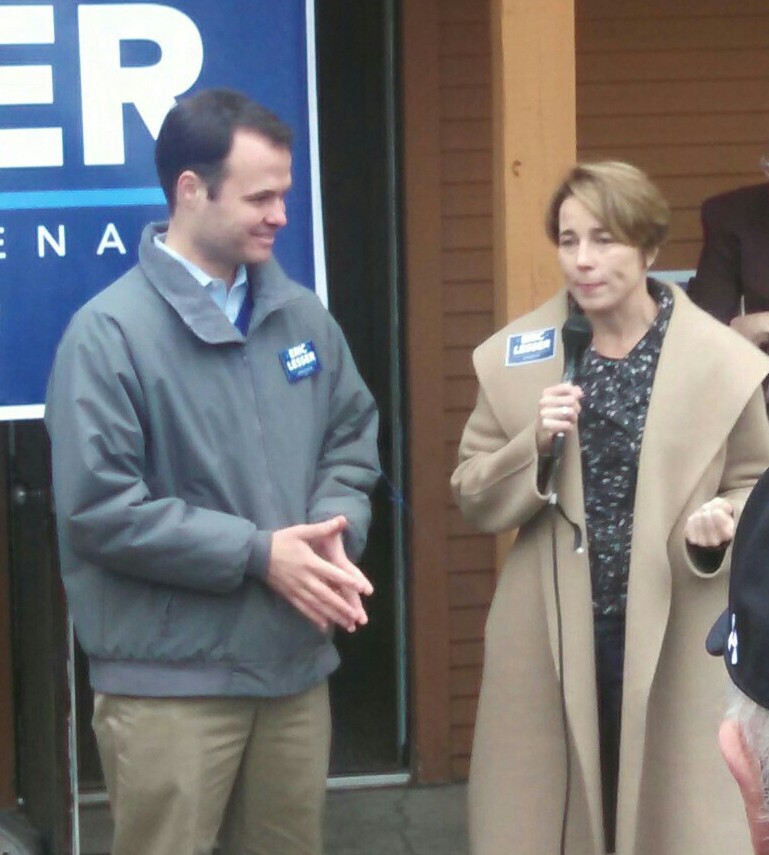 Back to the future with Healey from 2014? Lesser sure hopes so. (WMP&I)

Since announcing in January, Lesser has traveled the state to win a spot on what is essentially Attorney General Maura Healey’s gubernatorial ticket. Democrats select a nominee for lieutenant governor in the September 6 primary. That person runs on one ticket with the gubernatorial nominee. With no active opposition, Healey is the presumptive nominee. She likely face weak GOP opposition in November.

Lesser has secured backing from multiple legislative colleagues, including Senate President Karen Spilka, to counter Driscoll and Gouveia’s backing. Moreover, the unpredictability of turnout and areas where no candidate has a geographic advantage leave room for multiple outcomes.

Monday’s event here was a show of force for Lesser, however. Mayor Vieau highlighted the importance of Lesser’s support, noting Chicopee was losing its rep with lots of seniority, Joe Wagner. Lesser, he said, always prioritized Chicopee’s needs. Vieau was confident the city would have a voice in Boston if Lesser became LG.

Others noted the impact of East-West rail or how Worcester’s gains could become Springfield with a local LG. Rep Gonzalez drilled down further, connecting his support for Lesser more directly to Springfield’s manifold needs.

“I know a lot of people talk about Eric Lesser will say, East West Rail, but I know him about mental health,” he said. “I know him about health for our young kids, that because they grew up in a zip code that doesn’t provide for them, they have less access to care. I know him about protecting our youth in sports, and taking them out of drugs and out of the gang.”

Speaking to reporters after the event, Lesser played down recent endorsements other candidates have received in the 413. Last week, Driscoll received backing from city electeds including Springfield City Council President Jesse Lederman. 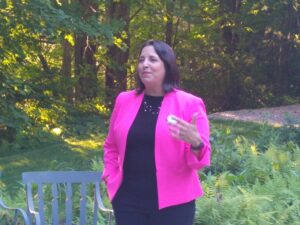 Driscoll campaigning in Western Mass this month. The battle for the west may not be over, but bigger fights are probably elsewhere. (WMP&I)

“Everybody’s going to build their support and, people, frankly, make their decisions based on what we’re talking about and what we’re focused on,” he said.

Neal’s backing notably comes before mail and early voting, which begin in the coming days and weeks. Anybody else who could turn heads by looking past Lesser have either already endorsed him—such as three of the region’s other four senators—or have reason to keep their dissent to themselves.

That pushes the race somewhat east from here. Lesser told reporters he expects to go on air as soon as this week. With a war chest of nearly $1.1 million as of last month, thanks in part to a solid fundraising network, he should be broadcast everywhere.

Gouveia recently tapped the state’s public campaign financing system to draw $144,000 in addition to the $55,000 she had as of June 30. Driscoll had $276,000 cash at the end of June, but a SuperPAC recently formed to back her candidacy. Campaigns and outside spending groups cannot coordinate.

The Boston Globe has identified the SuperPAC’s principal funders as a supporter of Republicans including Senate Minority Leader Mitch McConnell. Both Gouveia and Lesser have condemned its appearance in the race. Driscoll’s campaign has declined to comment on the PAC other than to deny involvement and say the mayor remains focused on running a grassroots campaign.

The lieutenant governor’s only constitutional duty is breaking ties at the Governor’s Council. Yet, the role has often served as a conduit to local officials. That point came up a lot outside Union Station Monday. Yet, Democratic LGs have not historically ascended much further. One notable exception is John Kerry. He became a US Senator within two years of taking office as Michael Dukakis’ second lieutenant governor.

However, Governor’s Councilor Hurley, a former district court judge and the only woman to have served as Springfield’s mayor, did not play down the LG’s role on her panel. She suggested Lesser could have a “calming” influence, a reference to that body’s often rambunctious reputation.

An early advocate of rail service herself, she went on, recalling early meetings with Lesser. She wrapped her brief remarks simply.

“I guarantee you, with Lesser, you’ll get a lot more,” Hurley said. 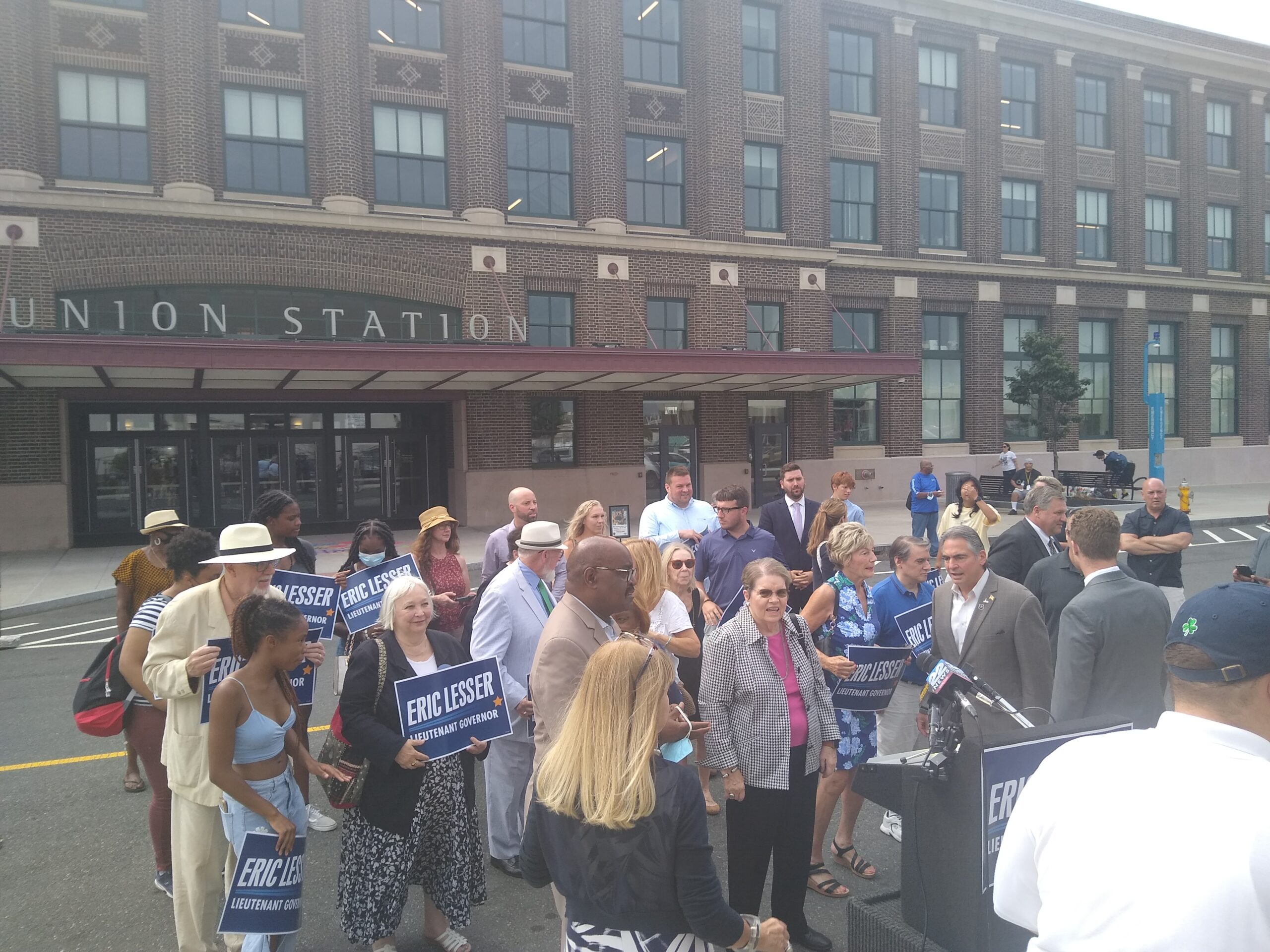 One thought on “A REN-dorsement for Lesser, As Battle for Number 2 Gets Hotter…”