In Driscoll’s LG Bid, a Mayor for All Seasons…and All 351 Communities…? 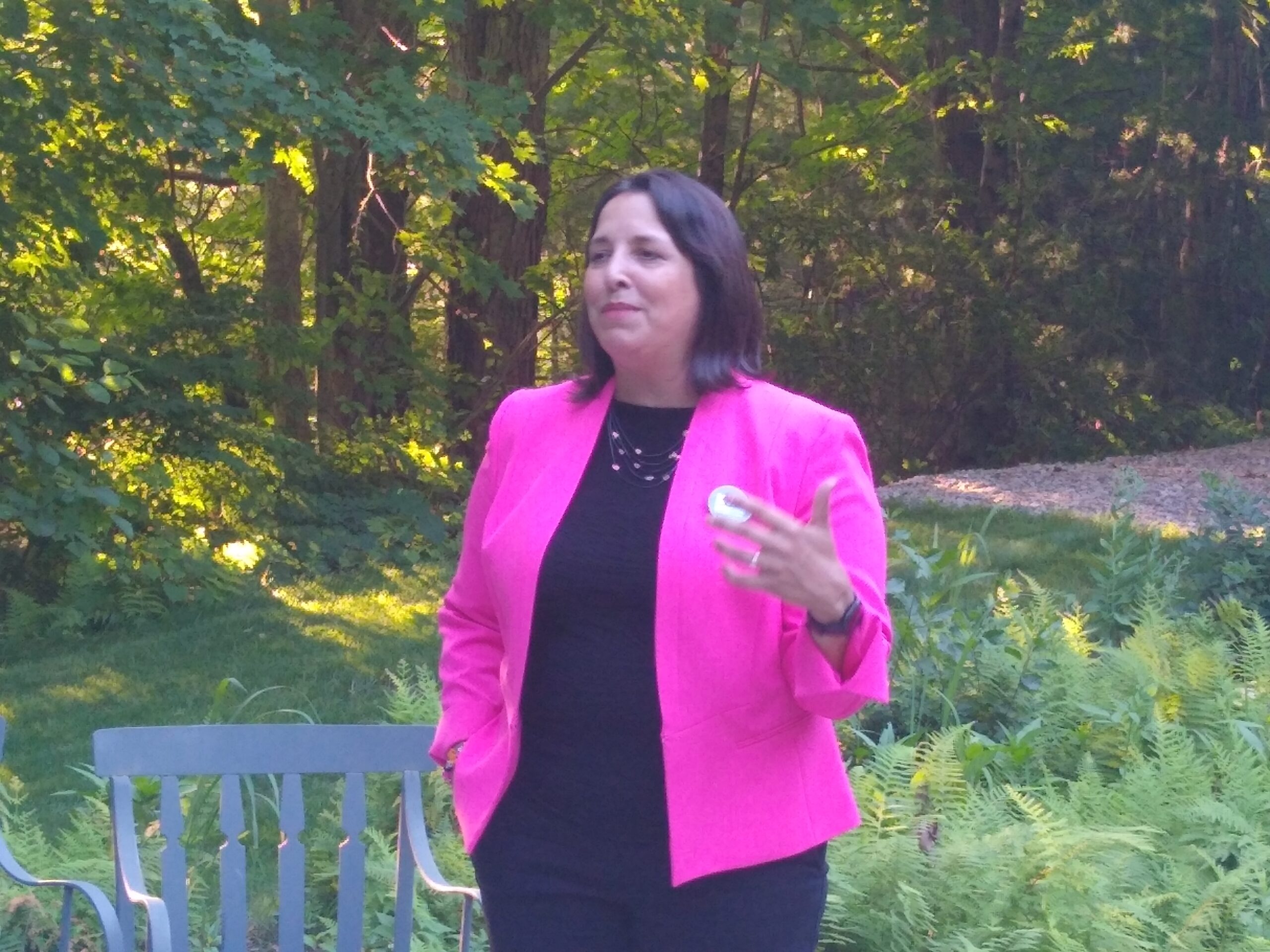 It’s no witch’s brew. Salem Mayor Driscoll says she has the formula to be LG. (WMP&I)

BELCHERTOWN—Kim Driscoll has a line while stumping for lieutenant governor, especially out here in Western Mass, in which she acknowledged she is not “the hometown gal.”

“But I really do care about hometowns and the strength of communities, and making sure they have the assets and tools they need to impact the quality of life in a favorable way,” she told WMP&I.

After being mayor of Salem since 2006, it is a means to seeking support from the 413, home to one of her rivals, Longmeadow Senator Eric Lesser. Echoing recent LG’s role, Driscoll has invested heavily into the narrative of lieutenant governors as municipal liaison in her bid to become Maura Healey’s running mate on the Democratic ticket.

With Healey facing no active opposition in the primary, attention among politicos has shifted down ballot. Compared to Attorney General or 2022’s unexpectedly hot race for Auditor, LG is a race for an office with few powers.  Lieutenant governors chair the Governor’s Council and fill in when the governor cannot do the job. Beyond that, the role is largely whatever the governor deigns it to be. Nevertheless, the race drew a big field and has turned tempestuous.

The candidates have carved out their own niches. Against Driscoll’s municipal emphasis are Lesser’s federal and legislative background—with a dollop of transportation—and Acton Rep Tami Gouveia’s desire to target the root cause of inequities wielding her public health and social work background.

The five-term mayor of the hauntingly famous Essex County city has drawn sizable support from current and former municipal officials, including in Western Massachusetts. Lesser has consolidated key support, but she has not conceded the region.

Driscoll has been on local Democrats’ radar for years. Easthampton Mayor Nicole LaChapelle first met Driscoll long ago through Emerge, a program that trains women to run for office. She had endorsed Pittsfield Senator Adam Hinds before Driscoll or fellow westerner Lesser entered the race. Hinds did not survive the Democratic convention.

When considering who to get behind then, she gravitated toward Driscoll. LaChapelle cited the model Driscoll set on succeeding in the “masculine infused environment” pervading municipal politics and moving difficult issues like zoning reform.

“Kim gave all of the mayors—and many municipal elected officials—a good validation and a path forward,” LaChapelle said. She added that recent LGs like incumbent Karyn Polito and her predecessor Tim Murray have also been helpful to communities. 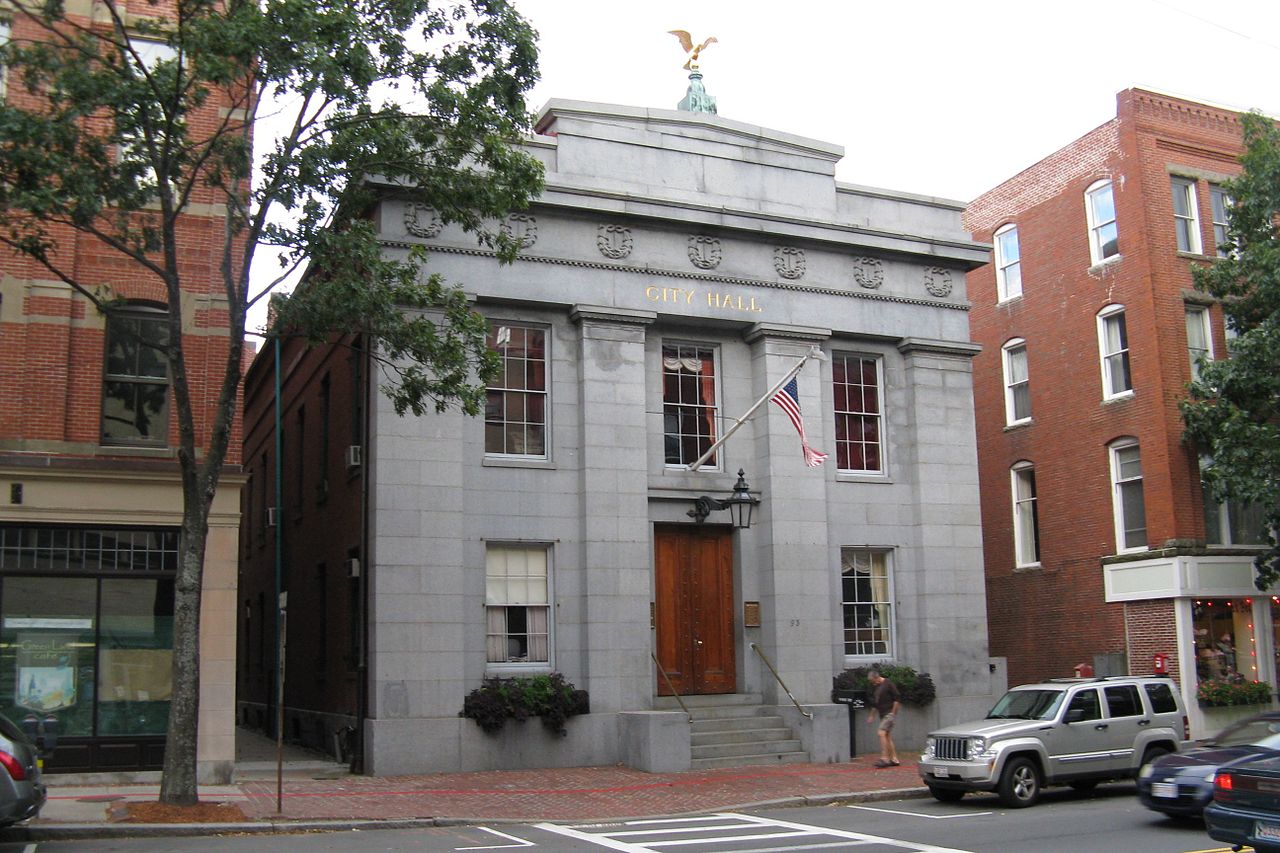 Lots of history in Salem, the city has used to appeal to tourists. Driscoll made history as its first woman mayor. Will her tenure appeal to voters? (via wikipedia)

With many challenges ahead for cities and town, LaChapelle continued, “A knowledgeable, municipal officer is something I want in that office.”

Speaking to WMP&I at a supporter’s home before a meet & greet, Driscoll discussed her background and what drove her to this race. A self-described navy brat, her father was a Korean war vet and Lynn native. Her mother was from Trinidad. Driscoll came to Salem for college. She and her husband, a union bricklayer, started their family there.

After stints in municipal government, law school and private practice, Driscoll accepted a top legal gig in Chelsea. She later served as deputy city manager. At the time, the city was clawing out of a fiscal and administrative morass. Installing a manager, versus a strong mayor, was an attempt to restore municipal government there. That experience later informed her decision to run for mayor of Salem in 2005.

“I think one of the reasons I ran for office in Salem was because I saw what professional government could do,” she said. “Salem, at that time was very much, let’s say, a little bit of an old boys network.”

“The reason why I hired her as deputy city manager is she had a broad range of experience in city government,” he said in a recent interview. 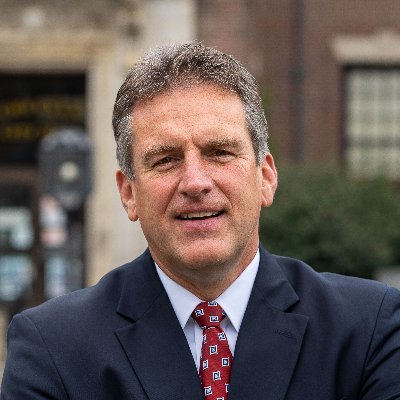 Jay Ash knows a thing or two about Driscoll working as someone’s deputy and thinks she’d fit in as a governor’s deputy. (via Twitter/@JayAshMACP)

As deputy, she handled many day-to-day operations, tackling complex challenges. Ash observed this carried over to her mayoralty such as Salem absorbing lost tax revenue from a coal-fired power plant.

“Kim is the type of person who has an overwhelming plate of work and always get that plate done,” he said.

While much of Driscoll’s Western Mass endorsements have been among a clutch of municipal leaders, she has attracted some local legislative support, too. Sunderland Rep Natalie Blais, who represents a rural swath of Western Massachusetts, said she appreciated someone who can relate to the strains on the towns in her district.

“Every opportunity I get, I try to hammer home how hard their public servants work for their communities and how thin they are stretched as they struggle to access resources,” Blais said. “As a municipal manager herself, I know that Mayor Driscoll understand that struggle and will want to help.”

Ash concurred. “I see the lieutenant governor’s position as a utility player,” he said. “It’s important that every corner of the state feels in touch with somebody of importance in the state.”

Driscoll campaigns on how she capitalized on Salem’s history, bewitching tourists and emphasizing the city’s sea and rail access. After four reelections, city voters must trust her hand at the till. So, why leave, however small Salem is, for a job that makes the Queen of England look powerful?

Though she insists she loves her current job, Driscoll thinks her background would help communities leverage state resources and amplify their local transportation and economic endeavors. On the day she spoke to WMP&I, Driscoll had been in the Hilltowns taking in their needs and visiting a farm in Leydon.

“This is really about bridging the opportunities that state government offers to champion the work in local government at the local level where we’re seeing a lot of innovation,” she said.

But that is not the only choice voters have. Plus, Gouveia and Lesser have bristled at Driscoll’s implication Driscoll that mayors like herself are more directly affecting residents’ lives. They both pushed back at the suggestion in a GBH debate this month. 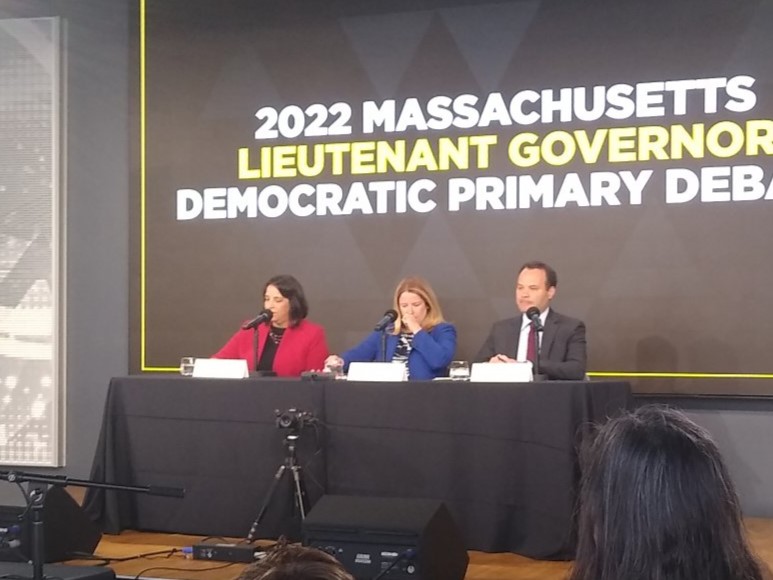 Although Driscoll has pulled ahead in monthly fundraising, Lesser leads in over all cash. Even after she won the most votes at the Massachusetts Democratic convention in June, the race had been civil. Then, The Boston Globe reported a pro-Driscoll SuperPAC, Leadership for Mass, would enter the race. A major funder was Christopher Collins, a real estate investor who has donated to Senator Mitch McConnell

A SuperPAC playing in an LG’s race has bewildered as much as it has inflamed. Gouveia and Lesser have called on Driscoll to disavow the outside help and raised it during closing statements at last week’s debate. Driscoll has declined citing prohibitions against coordination with SuperPACs. Whether condemning would count is the stuff that runs up campaign finance lawyers’ billable hours.

The SuperPAC’s first ad confirmed Collins’s funding. Politico reported both he and another donor, Robert Hale, have also given to Democrats including Healey and Senator Ed Markey, respectively. Hale donated to Lesser this year, though his campaign told Politico the donation has been returned. Still, Collins’s McConnell connection was enough. In an ad released Monday, Lesser rips Driscoll over the SuperPAC, flashing images of McConnell and suggesting she is too close to real estate interests before pivoting to his own battles against GOP special interests.

“This campaign has seen nothing but strong momentum these last few weeks as Mayor Kim Driscoll continues to pull in huge endorsements and out-raise her opponents, and this is why desperate campaigns are going to try to knock her down with misleading attacks,” he said. “Kim’s taken on the insiders before and won, and she’ll do it again in two weeks.”

Speaking to WMP&I, Driscoll acknowledged that Healey, assuming the Democratic ticket is successful in November, will define the LG’s role. Nonetheless, Driscoll, like the other contenders have promised to use the lieutenant governor’s chair at the Governor’s Council to deliver equity on the judiciary—and hopefully in rulings.

On transportation, Driscoll laments an “inspiration gap” in the state, pointing to rideshare programs Salem has. She supports East-West rail, but cautions it is not a savior for the 413.

She also spoke in detail about housing. With home construction low relative to population growth, particularly in and around Boston—including Salem—prices have skyrocketed there. Similar trends have played out across the commonwealth, if with varying intensity.

“That means folks who are pouring coffee and pouring beer for a living, who used to be able to afford a roof over their head in my community in Salem, no longer can,” she said. 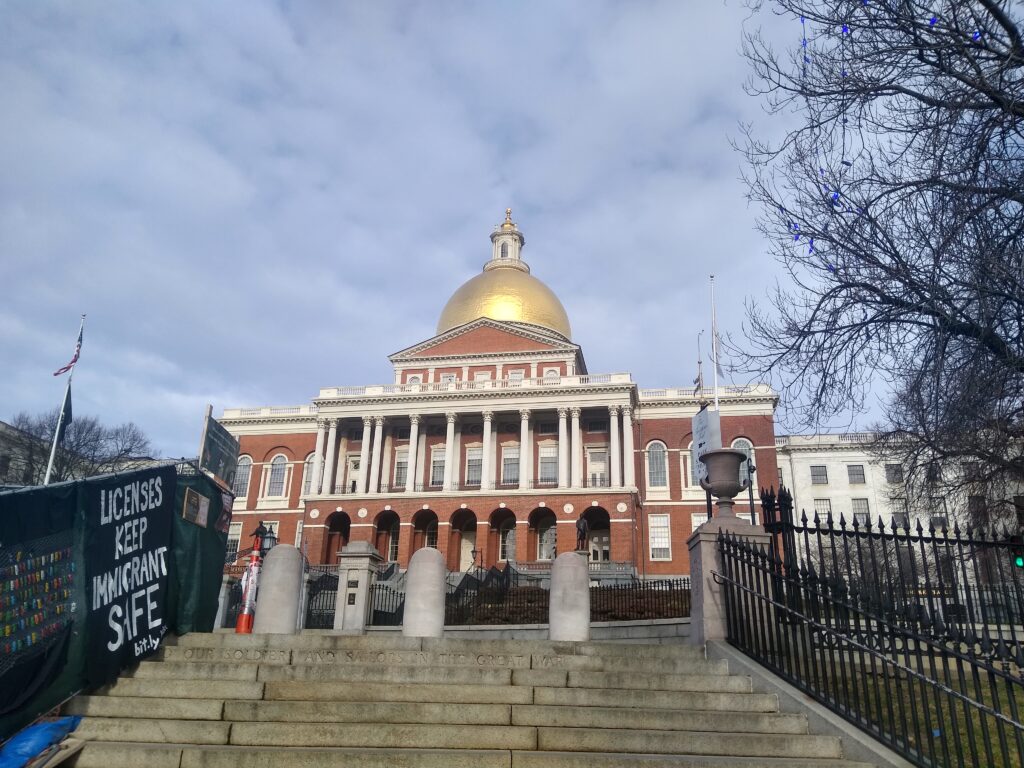 Supporters say Driscoll was a big part of a law that encouraged more housing. Can Beacon Hill go further with Driscoll the Number 2 at Beacon Hill? (WMP&I)

Ash cited her role in the governor’s Housing Choice initiative. Among its features was to encourage denser housing near transportation hubs.

“She’s a huge housing champion,” he said, noting that she utilized their relationship when he was Housing & Economic Development Secretary to bring state attention to projects in Salem.

“Something that I hear a lot from communities in the 1st Franklin is accessory dwelling units. Salem did adopt an ADU ordinance that helped it address the availability of housing and the accessibility,” she said, referring to her district’s formal name.

Since the interview, Housing Choice regulations came out. They took heat off some communities, but still received praise from housing advocates. Driscoll indicated it would take time to weight whether the carrot and stick hit the goldilocks mark.

“But the answer should be how do we do it, not ‘no,’” Driscoll said of reluctant communities. “I think those are some of the conversations that we will probably be needing to engage in over the next year.”

But first, she must win her primary. Although the contenders for LG have been laying out their pitches for months, it could come down to these last few weeks. In their own ways, Gouveia and Lesser are saying they can be that partner with Healey’s administration.

The spending online and on the airwaves is ratcheting up. Driscoll released her own TV spot Monday emphasizing her experience as Salem’s mayor, arguing that is what matters in LG’s office, alongside Healey.

“Ultimately. I hope people will see us, see an administration that’s helping them, ‘people like me’” as choppy water may lie ahead,” she said, noting her administration has spanned recession and pandemic. “That’s the lens I’ll bring to this job.”