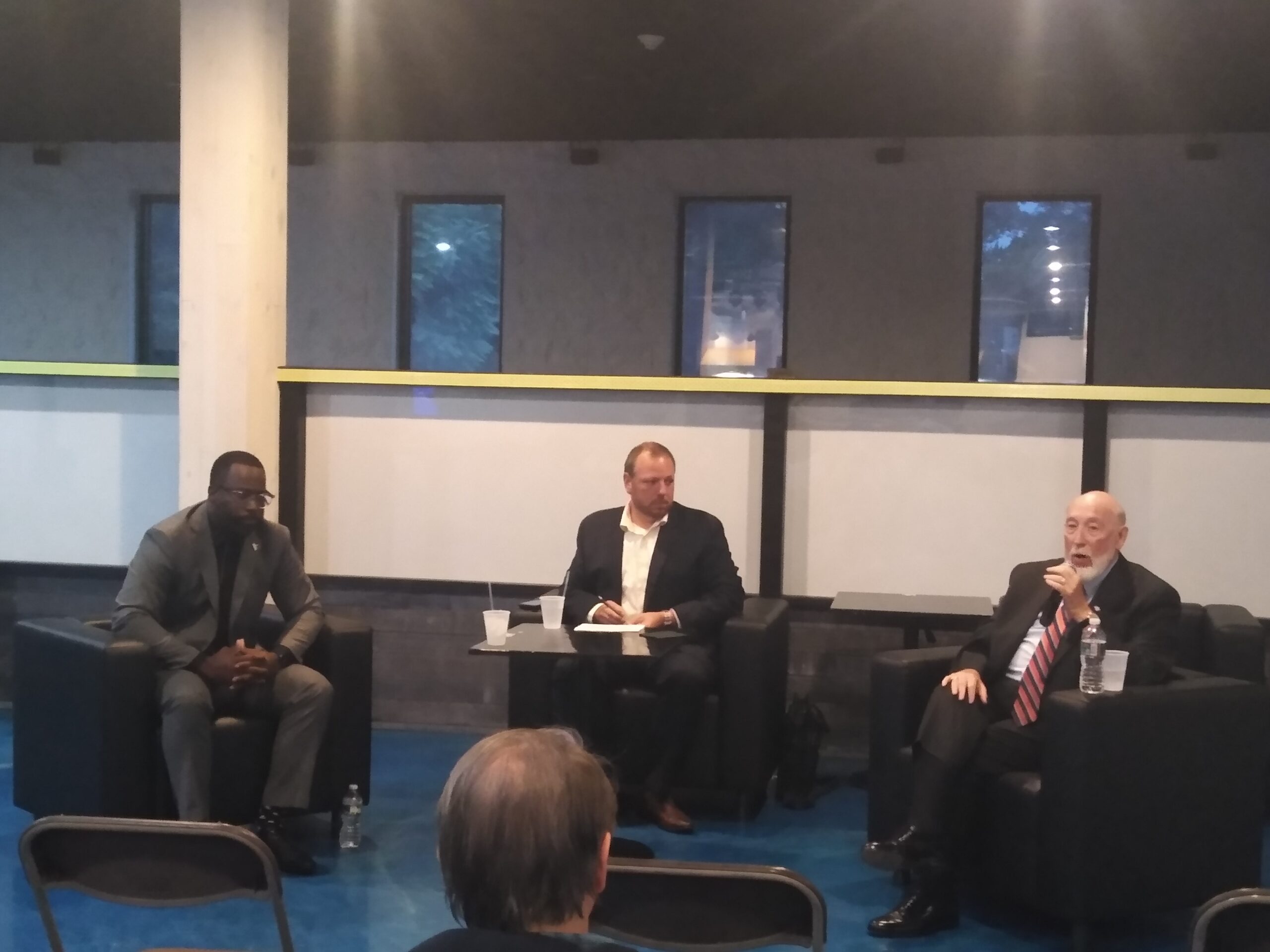 The Reminder’s Maza serving up the Ward 5 candidates at a forum last week. (WMP&I)

SPRINGFIELD—Ward 5 voters from Pine Point to 16 Acres are about to chose a new city councilor in the city’s first ever special Council election. The election arrives three months after Marcus Williams’s shock resignation and the even more surprising news Beacon Hill authorized special elections to fill the city’s ward vacancies. Mayoral aide Lavar Click-Bruce and retired labor leader Ed Collins survived an August 16 preliminary to face off this Tuesday.

With Click-Bruce hailing from Pine Point and Collins a decades-long 16 Acres resident, the race may fall along neighborhood lines. This inevitably sits along racial lines, but these have not been a flashpoint in the race. Rather, at forums and debates the candidates have attended since the preliminary, the focus has been on public safety, economic development and equitable allocation of city resources.

Last week, the Pine Point Community Council held a forum at Club Aquarius on State Street. The questions, posed by The Reminder’s Chris Maza, focused on public safety and infrastructure. The slow rollout of American Rescue Plan Act monies also had a cameo. The city’s allocation of those federal funds—and the speed of disbursement—has become a controversy in recent months.

In August, Focus Springfield hosted a debate between Click-Bruce and Collins that cut across several citywide topics including relations with non-profits—namely Western New England University—and public safety. WMP&I Editor-in-Chief Matt Szafranski was on the media panel of that debate alongside WAMC’s Paul Tuthill and The Reminder’s Executive Editor Mike Dobbs.

If there is one unifying issue across the ward now it is public safety, though not so much in the context of crime. Nuisance crimes and more serious concerns like burglaries do happen, but residents and the candidates often invoke speeding. Residents have complained that Springfield Police are not doing much traffic enforcement. If the chronically late ever get pulled over in Springfield, the State Police are doing it.

That said, at the Focus Springfield debate, the candidates were cool to Ward 2 Councilor Michael Fenton’s proposal to create a petitioning process to install speed bumps in heavily trafficked corridors.

“From a safety standpoint, I don’t think a speed bump would be ideal for the City of Springfield,” Click-Bruce said without closing the door entirely. “I understand the point behind that in slowing down traffic, but I believe there are other ways we have to look at.”

Collins, too, said he would not reject the ordinance. Still, he was “a bit of a skeptic about speed bumps,” too. He aired concern about how they could affect snow plowing. He suggested greater action from the traffic bureau at Pearl Street.

“I’m willing to consider anything,” Collins continued. “I certainly think that our police department’s traffic bureau is not staffed to a point that they can do what kind of job we would like to see them do and that they’d like to do themselves to try to control speeding.” 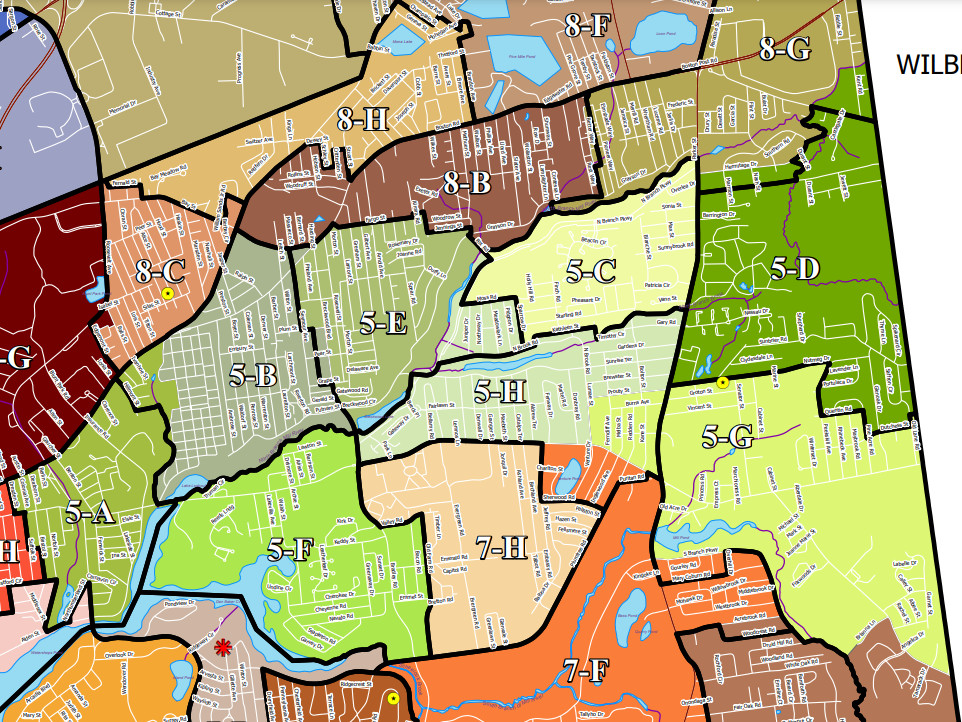 At that debate, the two were largely on the same page or careful not to overpromise. For example, on working with WNEU, Click-Bruce used the question to plug greater community outreach and involvement. Collins said the school was a good neighbor, but issues can always arise. Still, he pointed to his relationships as an asset. Here, WNEU’s president Robert Johnson, was chancellor at UMass-Dartmouth when Collins served on the UMass Board of Trustees.

Likewise, in Pine Point, the Ward 5 candidates acknowledged tax rates are a perennial issue. However, they alluded to the complexity of addressing it. Springfield, like most of the commonwealth’s post-industrial cities, has a split tax rate. This taxes commercial properties at a higher rate than residences.

As commercial property, from former factories to ailing shopping centers decline in value, the burden inevitably shifts to residential owners. Complicating matters further, Springfield’s residential market has shown remarkable strength over the last 20 years, save a stumble during the Great Recession. In short, homeowners bear more and more of the city’s tax burden.

Click-Bruce called for “a comprehensive plan” to address tax rates and institute tax relief. He called for greater coordination and collaboration among the mayor’s office, councilors and residents. Collins noted the Council can only cut from the budget, which could lower rates later. This has happened recently as property values outrun statutory limits on how much the city can collect from property taxes. But Collins also warned that cutting revenue means could mean cutting services now or later.

As is increasingly common in Valley races, this contest is somewhat a battle of biographies. Click-Bruce, who has coached youth sports, can point to his work in City Hall and before that the Dunbar Community Center. Before going to work for Mayor Domenic Sarno, whose orbit has backed Click-Bruce’s bid, he worked in the City Council office. 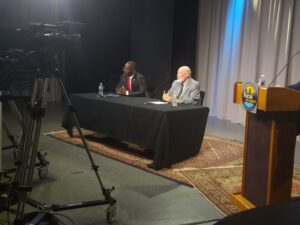 Collins, who served as the international representative for the International Brotherhood of Electrical Workers, has assembled an array of state and national political contacts, even as he kept his life and family in Springfield. Collins also ran for state rep in 2014.

The thorniest subject in the city right now may be that allocation of ARPA funding. At-large Councilor Tracye Whitfield and Justin Hurst have accused the administration of prioritizing grants for well-heeled city institutions while residents seeking assistance have been waiting months.

“I believe our seniors and our residents who were most affected by the COVID-19, should have received the money first,” Click-Bruce said in Pine Point.

Still, this put Click-Bruce in the position of defending his boss, whether directly or indirectly. Yet, in a sign for how civil the general for this special election has been—in contrast the preliminary’s final days—Collins did not go for blood. While he called the delays “unacceptable,” Collins said he had no interest in pointing fingers either.

Perhaps one of the starkest differences also alluded to Click-Bruce’s relationship with Sarno. At Focus Springfield, Collins challenged Click-Bruce to join him in seeking a solution that would allow the Council to enforce ordinances it passes. This issue arose in the context of the Springfield Police Commission.

Despite the Council overriding the mayor twice, Sarno refused to appoint the commission. He argued the law infringed on his mayoral powers. The Council cannot appropriate funds, however, and could not finance legal action to force Sarno into compliance. In the aftermath of the George Floyd protests, lawyers from Northampton signed on to represent the Council pro bono. The Council won twice in court, including a final favorable ruling from the Supreme Judicial Court.

Let’s not meet here again… and if we have to, let’s not wait for pro bono counsel, Collins argues. (via Suffolk U/SJC)

Collins has said the substance of the issue is not the point. Mayors cannot void duly passed laws. Click-Bruce was noncommittal on Collin’s call for a solution.

“I would definitely look at your resolution that you’re presenting on the table and make an informed decision,” he assured last month.

Aside from public safety, another universal complaint in Ward 5 was infrastructure.

“One of my favorite subjects. Terrible!” Collins said when Maza asked how he would rate Pine Point’s infrastructure. “And it’s not any better than 16 acres.”

While Collins credited former Councilor and current State Rep Orlando Ramos with getting more private ways brought up to city street standards, maintenance remains poor. As he has in other forums, Collins said part of the problem is the poor contracting for snow removal. Many trucks, he argued, are not appropriate for roads and tear up pavement better than clear snow.

“They have lesser equipment, pickup trucks with, plows on them that really looked like they were made to plow a driveway, not a city street,” Collin said.

Click-Bruce was not going to argue with Collins’s description. However, he said the money was out there, but there just needed to be a plan and persistence

“Some of the same concerns that we have today are some of the roles are terrible,” he said. “They need to be paid. They need to improve.”

“So, we’re talking about Pine Point,” Click-Bruce continued. “So, we want to make sure all these issues are addressed and on the table and making sure we have timelines and making sure our projects are accounted for.”

One issue some residents raised but did not feature in forums was economic development. Much of Ward 5 is residential, though it has large employers like MassMutual and the colleges. What residents want, however is retail and services that serve the Pine Point and Hill neighborhoods. Boston Road is near. Yet, those areas of the city do not have a robust retail corridor of their own as 16 Acres has along Parker Street.