UPDATED 11/10/22 8:09PM: To reflect a correction. Oliveira did win his hometown, but votes that put him over had not been recorded at the time of his election party. 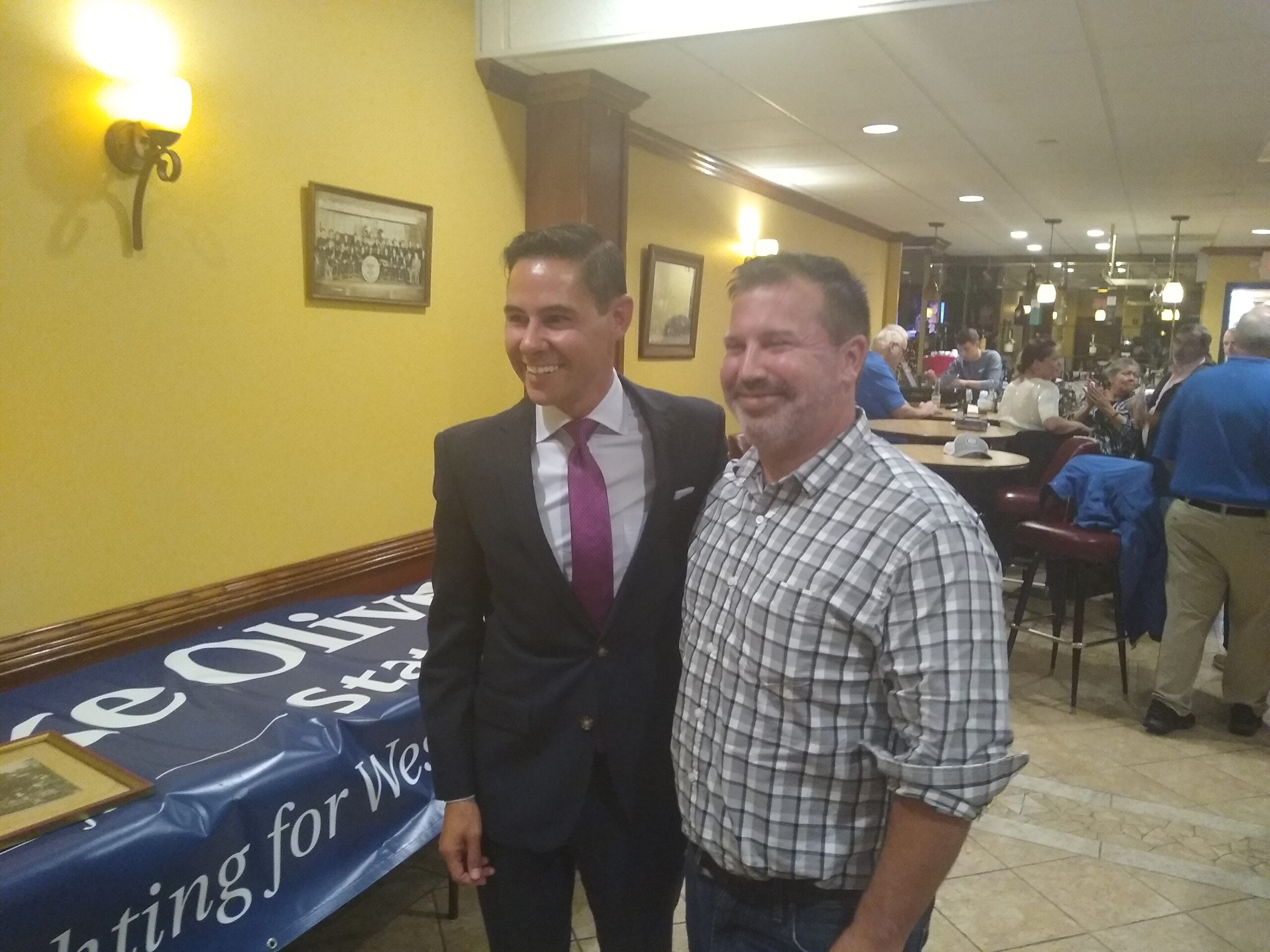 LUDLOW—In a night that showed Democrats holding out better than expected, Massachusetts made history with the election of the first woman as its chief executive. Maura Healey, who will also be the nation’s first openly LGBTQ governor, won the state’s highest office, but also broke the Attorney General curse that had stymied her predecessors who sought the higher office.

In the 413, the few competitive races sorted in line with expectations. The legislative races encompassing Ludlow both went to Democrats with strong ties here despite neither winning the town itself. State Rep Jake Oliveira succeeded in his quest to succeed outgoing Longmeadow Senator Eric Lesser. Aaron Saunders, now of Belchtertown but once a Ludlow Selectmember, prevailed to succeed Oliveira in the House of Representatives.

“I am just so excited to get to work for the 12 communities in this district to bring a voice for Western Massachusetts, but a voice that’s unified,” Oliveira told supporters.

Oliveira declared victory shortly around 10pm. Delayed counts in Longmeadow and a few other towns prevented him from declaring victory sooner. Yet, his campaign and supporters indicated he was leading even without those towns. He addressed supporters once Longmeadow padded his margin.

Saunders was more cautious, waiting for results to come in from the Hampshire and Franklin county towns the district reaches into. Before that, Saunders was behind his Republican opponent, Ludlow School Committee member James “Chip” Harrington.

According to The Republican, Harrington did not concede until after midnight. However, as those small towns including Shutesbury, began posting their hand count results, it became clear Saunders would prevail. 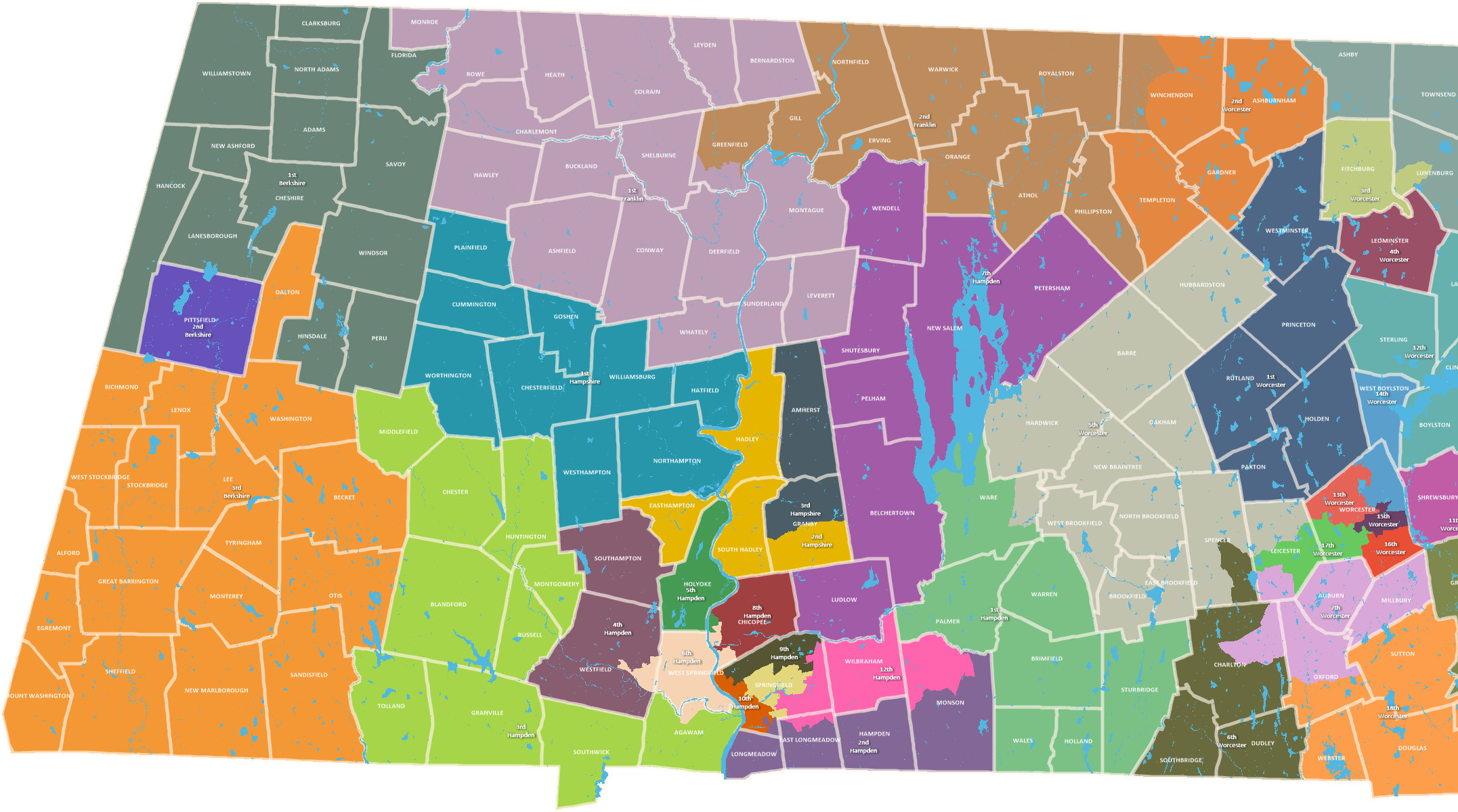 The new 7th Hampden in fuchsia around the Quabbin reservoir. (via malegislature.gov)

In an interview, Saunders expressed gratitude but an air of relief was palpable in his voice.

“We started out eight months ago working every day across the seven communities in the 7th Hampden district,” he said. “Yesterday’s result was exactly what we were hoping for: a convincing win.”

His victory also has some historical import. As redistricting had sewn Belchertown into one district for the first time in decades, he became the town’s first resident rep in some time.

“That’s significant. And being the first state representative to live in Belchertown in 70 years really speaks to the role the community plays in the district.”

Shutesbury is a very small town and Wendell is even smaller. Usually for state level races the winner is declared hours before we’re done counting.

People don’t WAIT for results from SHUTESBURY AND WENDELL????

Saunders, who had run for the Senate seat in 2014, benefited from Belchertown and the small towns to offset Harrington’s strength in their mutual hometown of Ludlow. A similar dynamic played out two years ago when Harrington and Oliveira vied for the seat after Thomas Petrolati stepped down that year. At the time, the district reached into Chicopee and Springfield, which split between Republican and Democrat respectively. The Democratic bent of Belchertown put Oliveira over the edge.

Oliveira benefited from Belchertown in the Senate race, too, but he also racked up health margins in Longmeadow, Springfield, South Hadley and elsewhere. Oliveira even won Wilbraham handily, a rare feat for Democrats. His Republican opponent William Johnson, while winning Ludlow, did not dominate the Hampshire County parts of the district.

As revised following the 2020 Census, Oliveira’s district, is now styled as the Hampden, Hampshire & Worcester. Starting in January, it will consist of modest parts of Chicopee and Springfield as well as Belchertown, East Longmeadow, Granby, Hampden, Longmeadow, Ludlow, Palmer, Warren and Wilbraham. 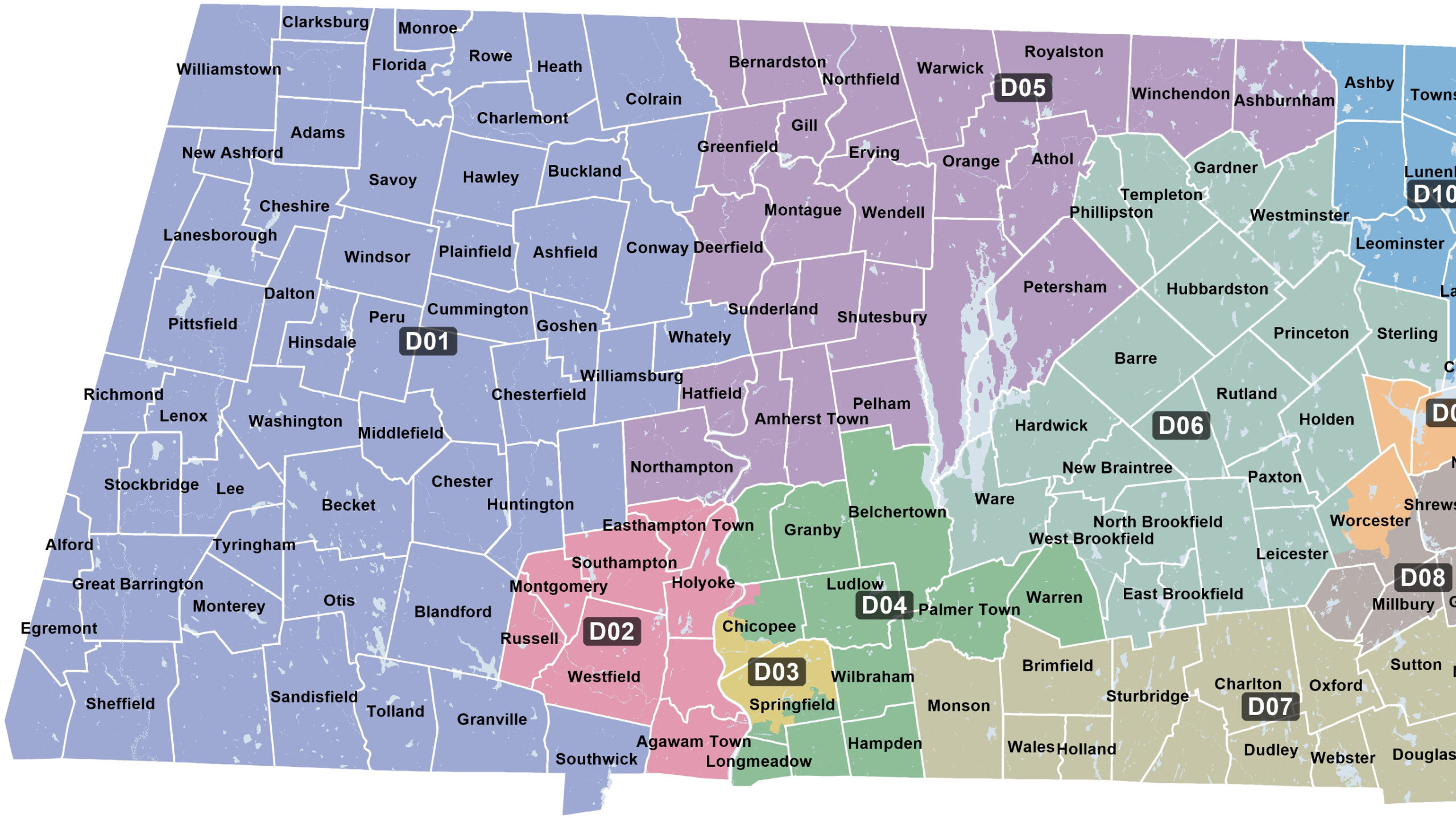 The Hampden Hampshire & Worcester in green, as it will be from this election onward. (via malegislature.gov)

While Saunders had no opposition in the Democratic primary, Oliveira had to get past former congressional staff Sydney Levin-Epstein of Longmeadow first. The margin of victory belies how pitched the battle for the nomination was. But after dispatching his primary rival, Oliveira faced Johnson, who owns a towing business and could self-fund. A SuperPAC linked for Governor Charlie Baker also spent in the race.

Speaking to the press at his victory party at the Portuguese Club here, Oliveira appeared exuberant despite the nearly year-long campaign. He rattled off how many doors he knocked with his volunteers hitting even more.

“That’s what resonated with voters and I’m just so pleased that we have the opportunity to connect with so many people over the last 10 months,” he said.

There was some disappointment in the room that Oliveira did not win his hometown. However, these initial results proved incorrect. Mail and early votes put Oliveira up over Johnson, a reversal from two years ago when Harrington beat him in their hometown.

Although Oliveira defied in the odds in Ludlow, which has been trending red, Saunders did not. While speaking to reporters, Oliveira acknowledged that elections and electioneering had changed. 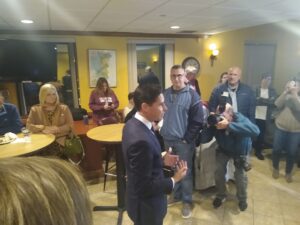 “Ten years ago, the issues tended to be much more local,” he said.  “A lot of these races have become nationalized and the National tone really seeps in to legislative races.” That causes cities and towns to mirror their national political proclivities.

These national shifts continued in other races. More affluent suburbs like Wilbraham continued their move left. Once Democratic towns are going the other way.

Oliveira observed he still had two months left on his term in the House and had plenty of work ahead. Still, he had meeting scheduled with Lesser, his soon-to-be predecessor, and Northampton Senator Jo Comerford, who will cede South Hadley to him in redistricting.

The races here were the main draws in the region. In nearby Chicopee, Democrat Shirley Arriaga beat an unenrolled candidate to win the 8th Hampden House race. Across the river, Agawam Town Councilor Anthony Russo, a Democrat, came closer than anybody else to dislodging State Rep Nicholas Boldyga. But the Southwick Republican endured.

Democratic Senator John Velis, whose district shed some blood red territory in exchange for taking on West Springfield, beat back Agawam Town Councilor Cecilia Calabrese. Calabrese, a Republican, even lost her hometown despite her party’s continuing grip on the reddening suburb.

Further afield, the Berkshire Senate seat-which now extends east into all of the other three western counties, went to Paul Mark. Mark, a State Rep, defeated an unenrolled candidate to succeed Adam Hinds, who resigned some weeks ago to take a job with the Edward M. Kennedy Institute for the US Senate. 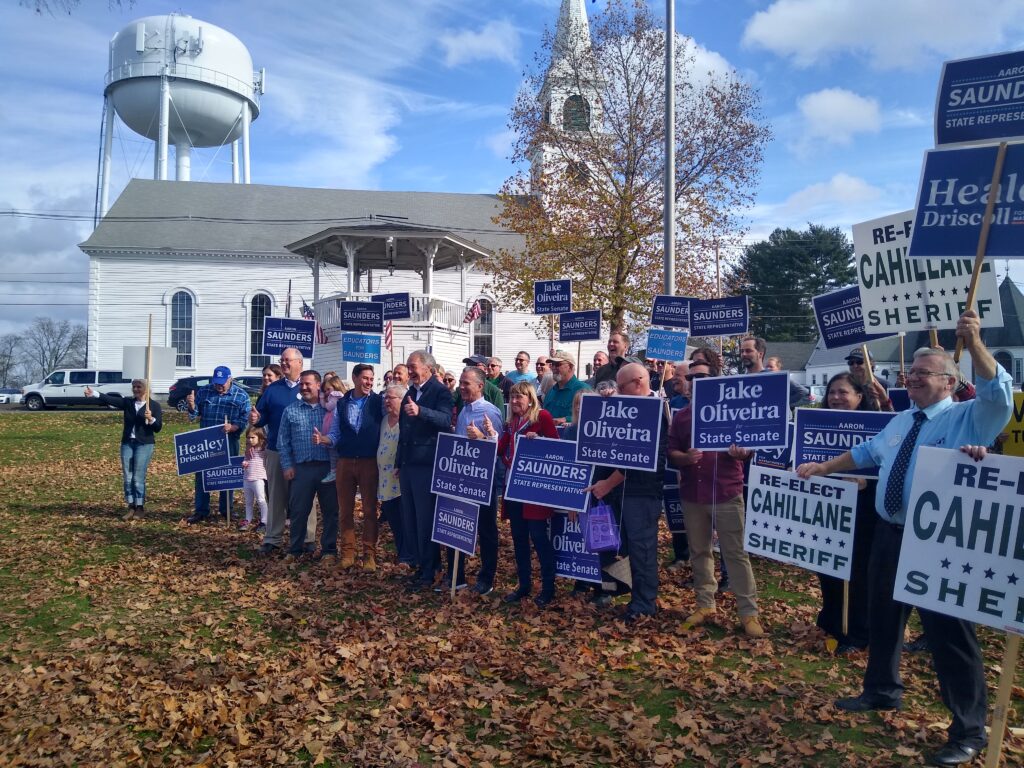 The results conceal a level of concern or at least strong interest among Democrats to retain the seats Oliveira and Saunders won. Healey’s historic victory was never in any serious doubt, but midterms often weigh on the party that holds the White House.

US Senator Ed Markey campaigned for both men in Belchertown over the last weekend, energizing the growing Democratic base there. Indeed, it would turn out that Democrats did better—far better—than Beltway-centric conventional wisdom had assumed—and the victories in the districts here were no exception.

Nevertheless, on Tuesday night, Markey was among the political emissaries who placed a call to both Oliveira and Saunders. A win is a win, however unexpectedly resounding.