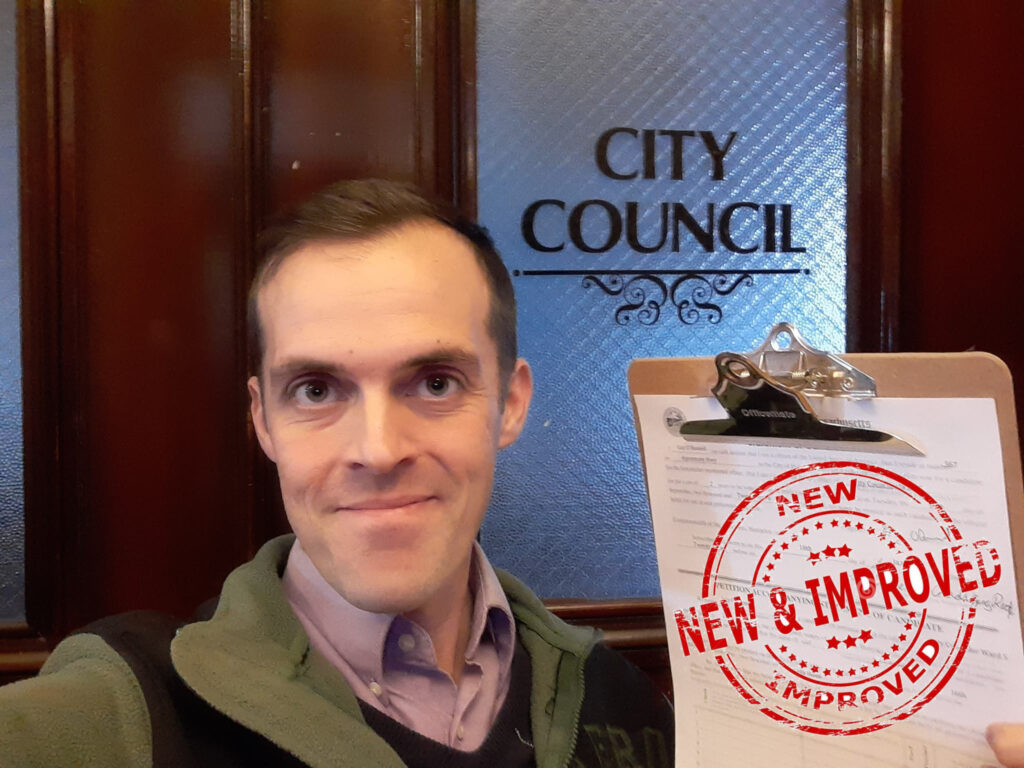 Guy 2.0, will the voters imbibe? (created via Facebook/O’Donnell campaign and stock images)

Holyoke may not have a contest for mayor in 2023 but City Council races are already beginning. One race that went into overtime last time appears to have a redux. On Thursday, Guy O’Donnell announced he would again challenge Ward 5 Councilor Linda Vacon for the seat that covers much of the city’s western flank.

O’Donnell came within 18 votes of defeating Vacon last time, easily the closest call she has had. That race went to a recount, but the margin was relatively enormous. Ward 5 cast less than 1700 ballots in the 2021 general election. Although O’Donnell may have made Vacon sweat then, the heat may be on him this time without a red-hot mayor’s race this year.

“It’s time for a change in Ward 5,” O’Donnell said in a release. “The issues I ran on in 2021 haven’t disappeared, and in some cases have only gotten worse. People still want to reclaim our schools and ensure every child has access to a high-quality education.”

O’Donnell, who was a first-time candidate in 2021, went on to highlight education, jobs, housing, parks and infrastructure. In a follow-up email, he said the issues that have not gone away were reclaiming schools, an ostensibly reference to receivership, and making sure corporations paid their fair share. However, he said that after speaking to ward residents, he noticed a repeat issue.

“One thing that stuck out to me is that we need to ensure that Holyokers have safe affordable housing because that is not the case for so many people right now,” he emailed.

In his release, O’Donnell jabbed the incumbent for creating problems, a common critique of her over the years. Vacon, a prominent figure on Holyoke’s right, has frustrated progressives in the city on multiple fronts. Yet, when the Council has not split along ideological lines, Vacon has found common cause with others, if on process when city politics jolts suddenly. 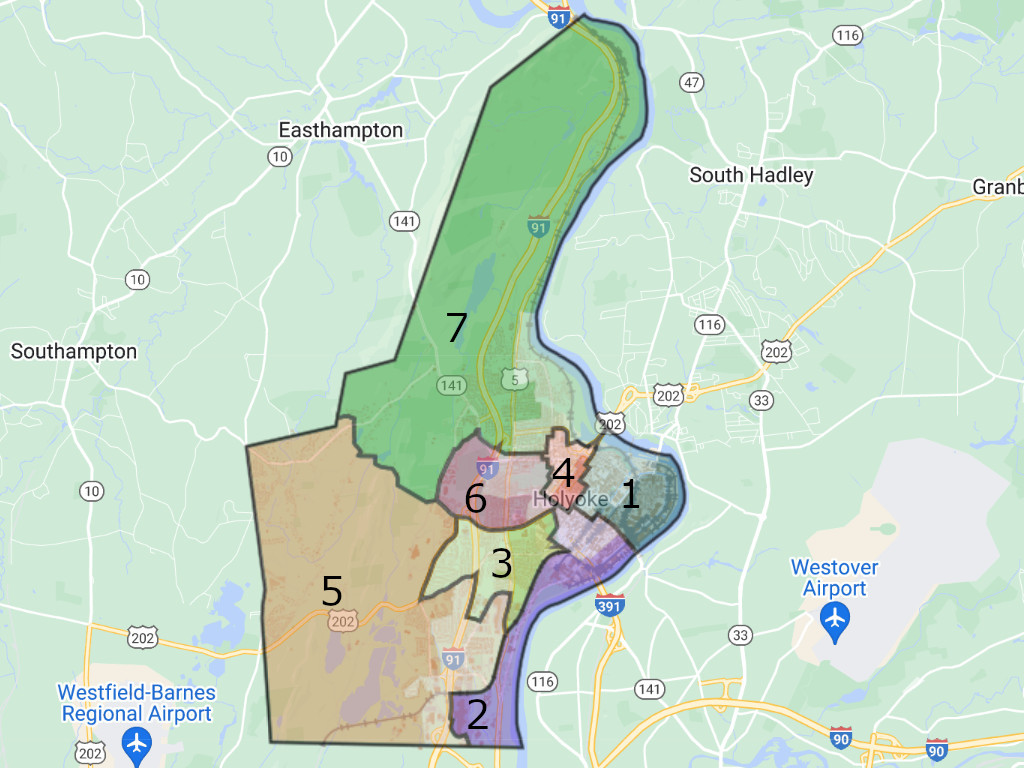 Holyoke is all its warded glory. Ward 5 at lower left in orange-brown. (via holyoke.org)

“I look forward to running on my record of strong constituent service, leadership and community advocacy,” she emailed. “Serving as Ward 5 City Councilor is an honor and I believe my record of sincere commitment, hard work and leadership will earn me the support and votes to retain my seat.”

According to the Clerk’s website she has already taken out papers for reelection.

Prior to 2021, Vacon bodied a string of challengers that ran against her in the preceding cycles. Before that, her most competitive race was likely her 2009 victory over incumbent Ward 5 Councilor John Brunelle. She beat Brunelle by 45 votes after failing to oust him in 2007 and 2005.

That may offer a cautionary tale for O’Donnell. His first faceoff with Vacon occurred amid the city’s first completely open mayor’s race in 12 years. Alex Morse had retired and resigned early leaving a massive field that the preliminary whittled down. Then-Councilor Michael Sullivan and Blandford Town Administrator Joshua Garcia battled it out in November amid of bevy of boisterous Council races.

Eighth time still a charm for Councilor Vacon? (via LinkedIn)

Vacon’s victory over Brunelle in 2009 came in a similar context. A different Michael Sullivan had retired after a decade as a popular mayor, leaving a boisterous campaign in his wake. Holyoke elected Elaine Pluta its first female mayor the same day Ward 5 elected Vacon.

In 2021, Garcia, now mayor, won citywide though he lost Ward 5 according to data from the City Clerk’s office. But O’Donnell surprised by holding Vacon to that margin, he will not have that turnout boost from the mayor’s race this time.

Nevertheless, the results from last time serve as a foundation off of which O’Donnell can build in 2023.

“In 2021, I came just 18 votes short of victory — a close margin that proves the people of Ward 5 are demanding something new,” O’Donnell said in his statement, pointing to volunteer work at a elementary school and organizing against money in politics

“This year, let’s finally bring fresh ideas and solutions to Ward 5,” he said.