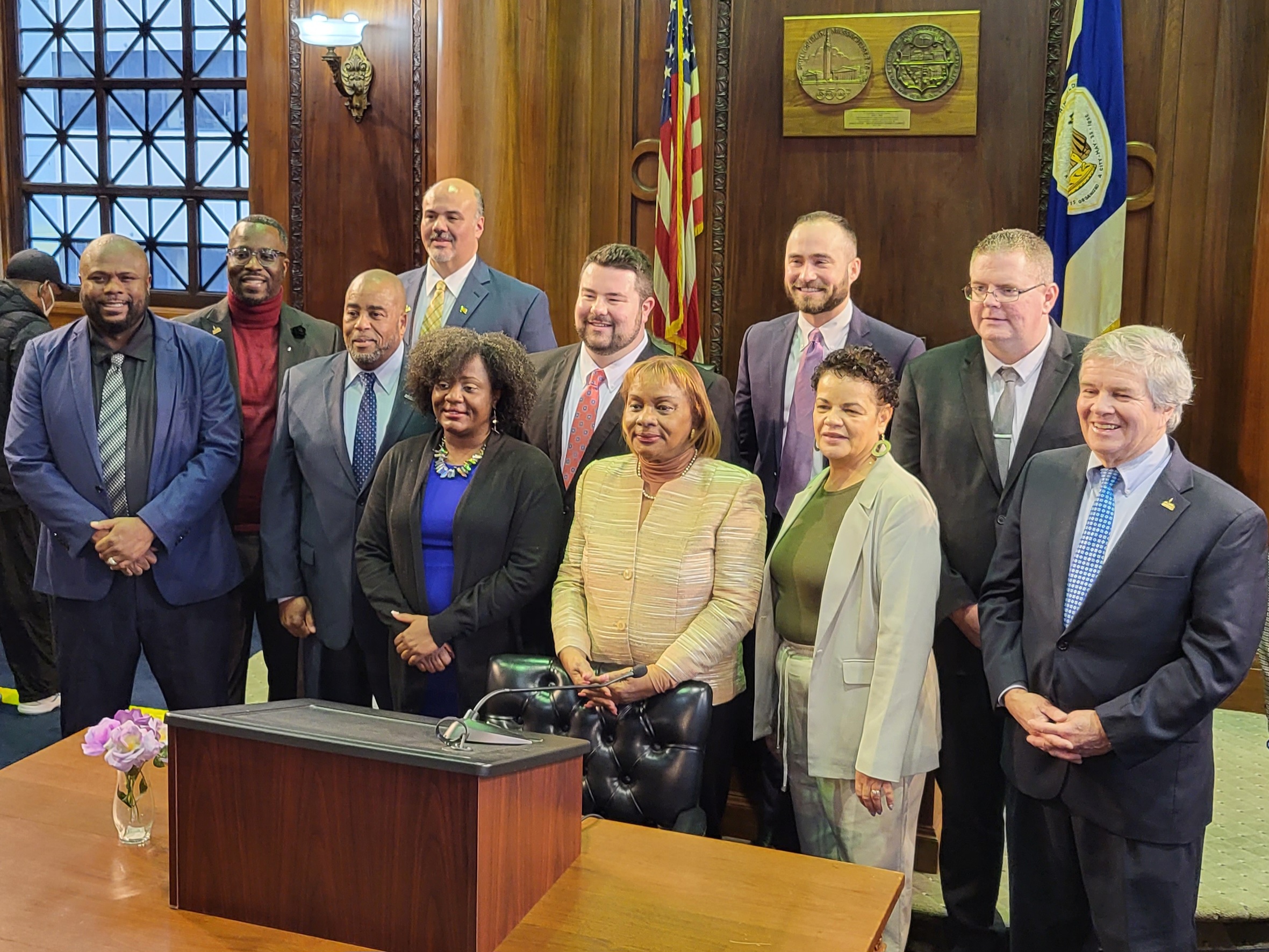 SPRINGFIELD—A new calendar year also means a new municipal year here. There was no citywide election last year so the only formal order of business in the new year was the installation of the Council President. At-large Councilor Jesse Lederman had already secured the votes for a full term as President in 2023. That also left him with the duty to appoint committees.

Yet, this is no ordinary municipal year. Springfield elects a mayor in 2023. The incumbent, Domenic Sarno, seeking reelection is a surer thing than the sun rising. One councilor, Justin Hurst, is already in. Lederman could follow soon. Indeed, his January 2 inaugural speech was either a proud reflection of achievements—or a reintroduction to an audience larger than the one crammed into the Council chamber.

“The corner of Bay Street and Clarendon where I grew up is about five minutes from City Hall, but it can seem much further away for too many in our community. In fact, even that public podium, mere feet from the decision makers, can feel too far away for too many,” he said.

“But I saw clearly, standing there then, the difference that can be made in local government. The impact that a singular vote can have on an entire neighborhood, or an entire city,” Lederman continued. “And I decided then, that the way to make a difference was to cross that bar, and to stand here for what I believe in.”

Lederman ended 2022 as council president, but he did not begin the year as such. Rather, he ascended to the role when Marcus Williams resigned to relocate out of state. Lederman therefore inherited Williams’s committee picks with the prerogative to revise them for 2023. The only alterations he made in 2022 were to account for his own ascent and the election of Williams’s successor Lavar Click-Bruce.

This was also the first normal Council organizational meeting since 2020. The last two inaugurals of the Council and/or its presidents were muted affairs due to the pandemic.

In the run-up to his speech, Lederman played down any speculation about his future. Still, denizens and observers of 36 Court Street will meditate on the pageantry, words and actions from the swearing-in and beyond. 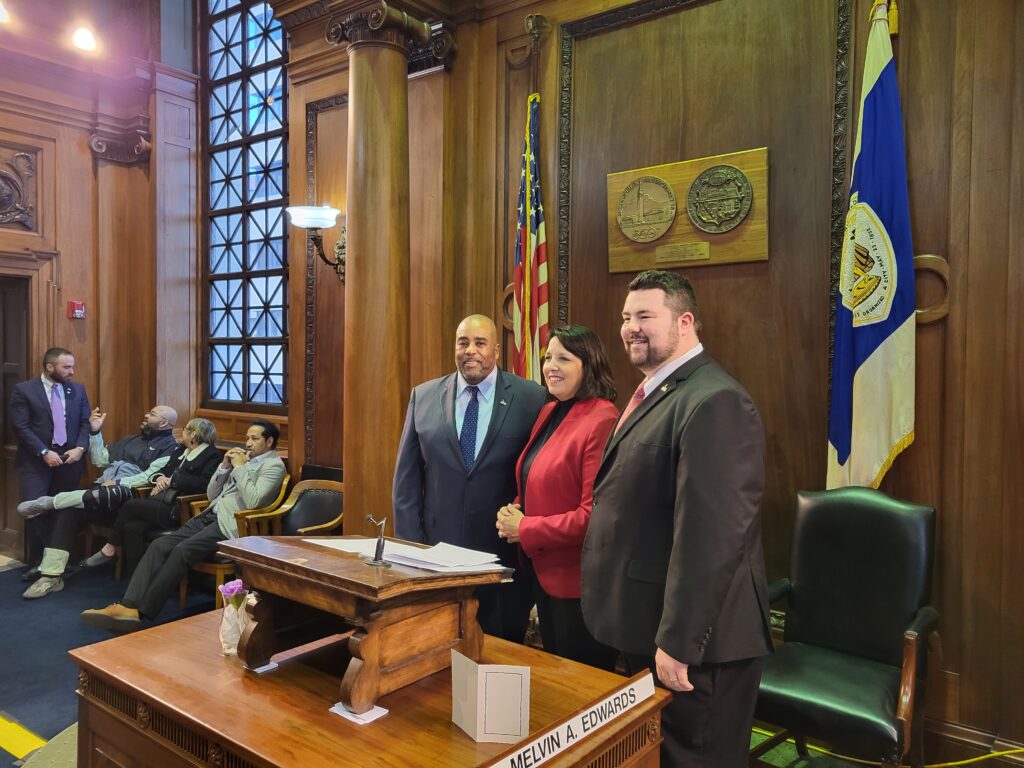 Only one executive in the House? (WMP&I)

The same day Ward 3 Councilor Melvin Edwards received a full year-long term as Council Vice-president. In his own brief remarks, getting a bit emotional, he thanked his colleagues for their kind words. Plainly aware of the growing political buzz among the city’s chattering classes, Edwards had an announcement of his own.

“Election season is upon us and I would like to take this moment to officially announce my intention,” Edwards paused, “…not to be running for mayor!” Laughter ensued.

The current mayor hung back, visible but not obtrusive. The 15-year incumbent usually graces the Council chamber at the body’s inaugurals and his budget presentations. One absent party was Hurst, who announced his mayor campaign on November 30. Walsh also did not attend.

Another then-mayor was in the room. Driscoll ran Salem until she took office as lieutenant governor alongside Governor Healey on January 5. While governors and statewide officers have popped into mayoral inaugurals, rarely to they show at the various anointings of city councilors.

Driscoll was in town for a pre-inauguration service event with Healey, but said it was “fitting” to kick off her inaugural week with a local one. Local government had been a passion and a theme of her campaign for lieutenant governor, which Lederman backed. Driscoll spoke in broad themes about local governance, but she did recognize Lederman and Edwards specifically.

“I know you take the work that you do seriously and you have a strong commitment to a be leader not just for the community but for the body and that matters,” she said. 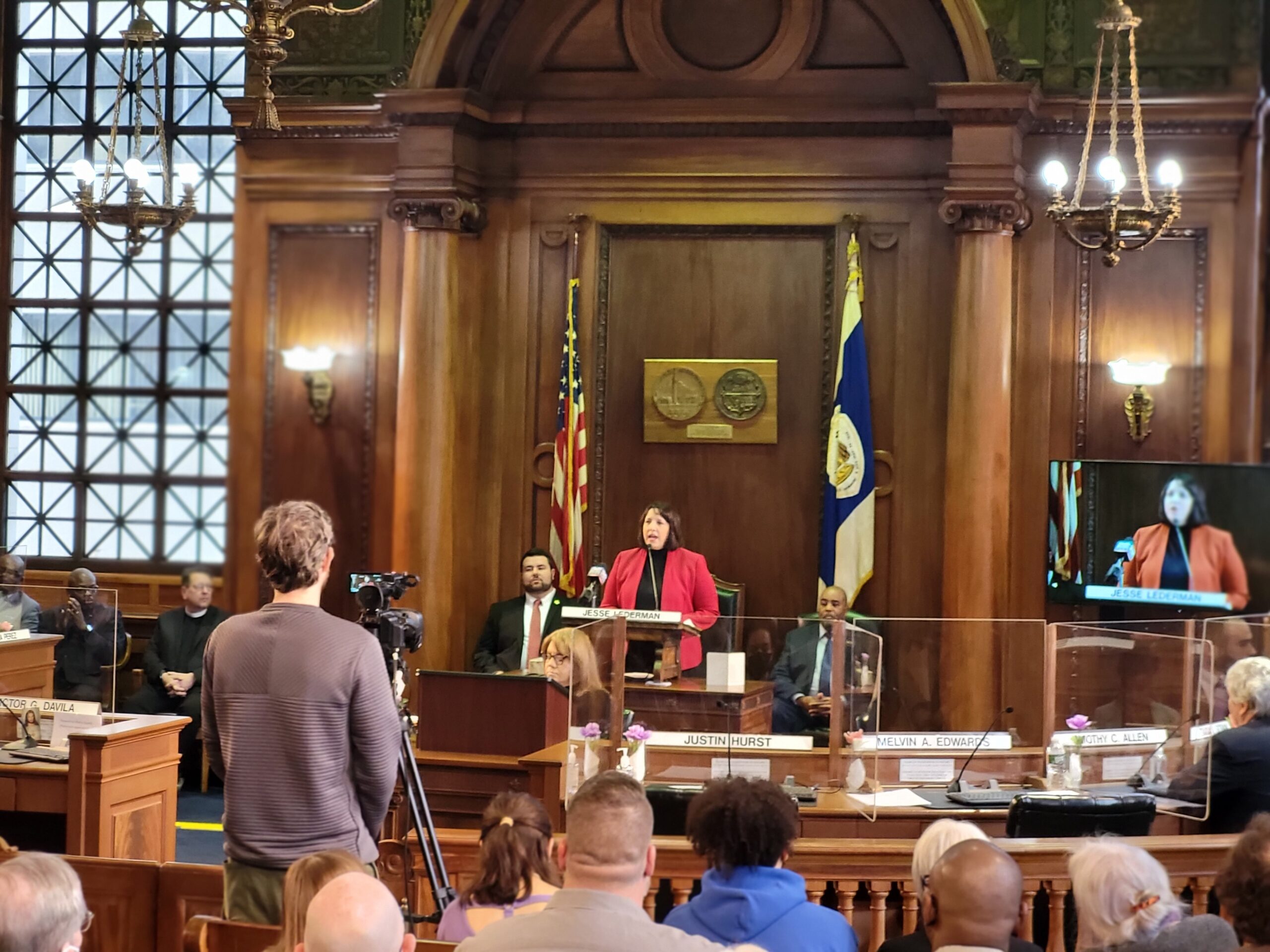 In his remarks, Lederman paid tribute to supporters who had passed away since he became active in the biomass battle 15 years ago. Among those he invoked were E. Henry Twiggs, Michaelann Bewsee and Dave Vigneault.

Lederman pointed to work from the last six months including upgrading the equipment for the city’s public access station, Focus Springfield for the Council’s return. He also promised continued oversight of the implementation of the police department consent decree with the US Department of Justice.

In addition to feting the Council’s accomplishments, he announced four working groups and two special committees. The work groups, like ad hoc committees of prior councils, include residents but have a councilor as chair.

Some of these issues that have been the subject of prior committees or study panels, but Lederman does appear to be zeroing on more specific areas. In his speech, Lederman said the Digital Equity & Internet Access was in response to Boston Globe report that noted only 54% of Springfield residents have “adequate broadband service.”

Lederman also released the full committee assignments for the Council itself on January 5.

In his speech, Lederman identified two special committees: an American Rescue Plan Act Advisory Committee and an Impacted Neighborhood Stabilization Fund Oversight Committee. Councilors Tracye Whitfield and Maria Perez will chair those respectively. Edwards and Timothy Allen will serve on Whitfield’s committee. Councilors Click-Bruce and Malo Brown will serve on Perez’s panel, which will consider the impact of cannabis outlets and the funds allocated to help their neighborhoods.

The full list foreshadows the careful choreography Lederman must maintain as president if he pursues and higher ambitions. Unlike Congress or the legislature, committees have limited power. Nevertheless, chairs do have an outsized role in oversight and shaping policy relative to the quotidian councilor.

While early supporters of a council president sometimes get the choicest assignments, there is regular churn, too. Rarely do individual councilors hold a post for more than a few years at a time. That was evident in some of Lederman’s other picks.

For example, he put Allen in charge of the Finance Committee. Whitfield had held the post for a few years. However, Whitfield, a persistent critic of Sarno’s handling of ARPA funds, now has her own panel dedicated to that issue. Whitfield remains on Finance joined by Govan.

A more contentious reshuffle involved the Public Safety Committee. Victor Davila, the 2022 chair, moved off the committee entirely. Click-Bruce will chair the committee for 2023. Fenton and Govan shall also serve on it. Speaking to WAMC, Davila attributed the change to his oversight of the Police Commission. Lederman pushed back, pointing instead to a desire to more councilors new experiences.

Davila will chair on Elder Affairs and serve on the Audit and Civil Rights committees. Hurst and Whitfield chaired those latter two committees, respectively, and Lederman left them in place for 2023.

General Government remains unchanged. Fenton remains its chair. Fenton will continue to chair the Casino Oversight Committee. Health & Human Services now has Govan as its chair, but former chair, Kateri Walsh, remains on the panel. Maintenance & Development, which Lederman chaired before Marcus Williams’s resignation, will have Curran as its leader.

Planning & Economic Development’s gavel remains with Edwards for another year. The chair of Intergovernmental Affairs passes from Curran to Walsh. Sustainability & Environment shall be chaired by Brown.

Whatever waves these and the other choices may make are unlikely to alter political arithmetic too much. City government, including the Council, will grind on the mayoral race notwithstanding.

Still, with at least Councilor Hurst in the mayor’s race and Lederman possibly not far behind, seeing how the whole municipal board is set shall provide context as the campaign evolves. 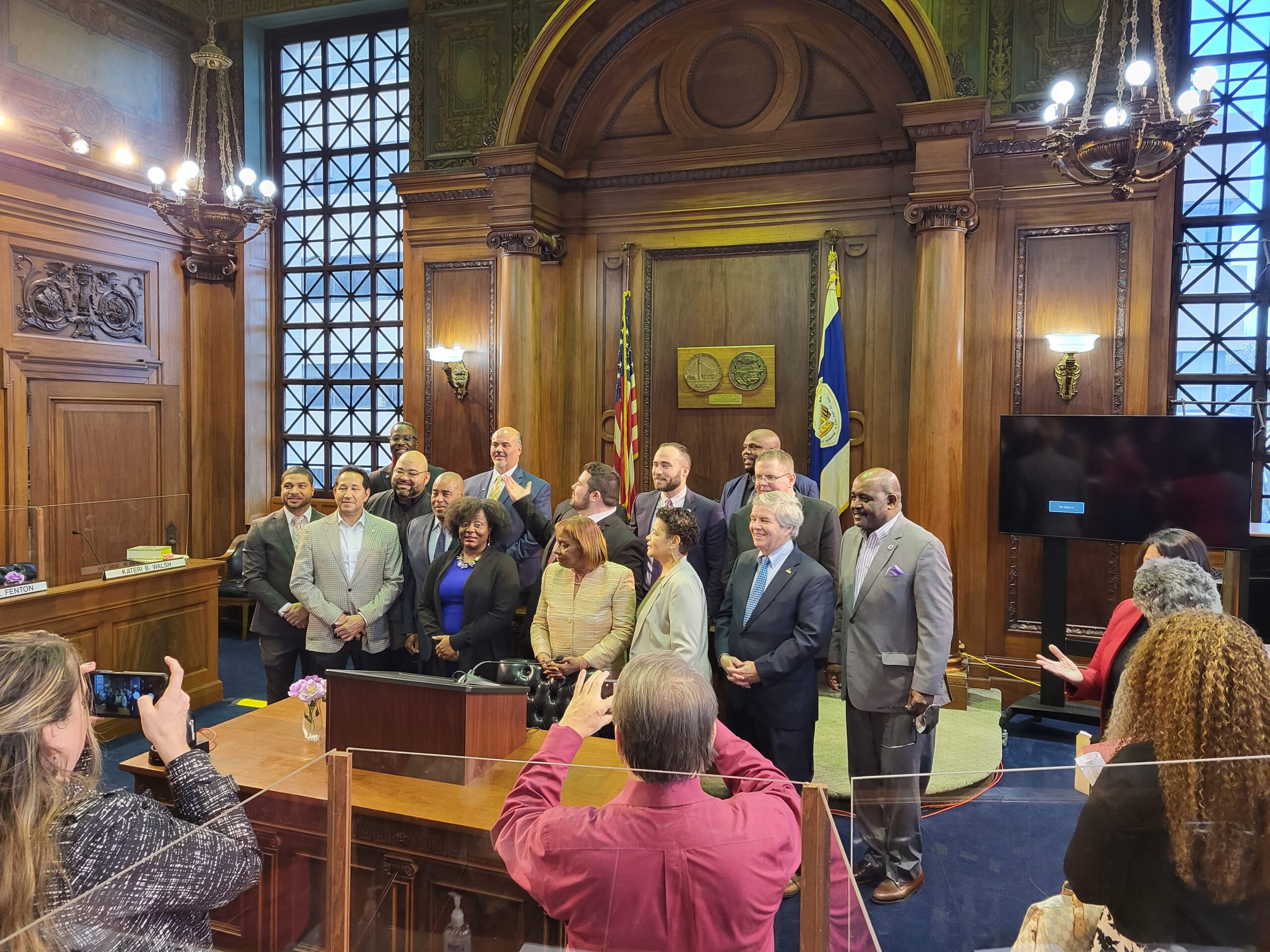 But what else is in store for Springfield Politics this year? (WMP&I)