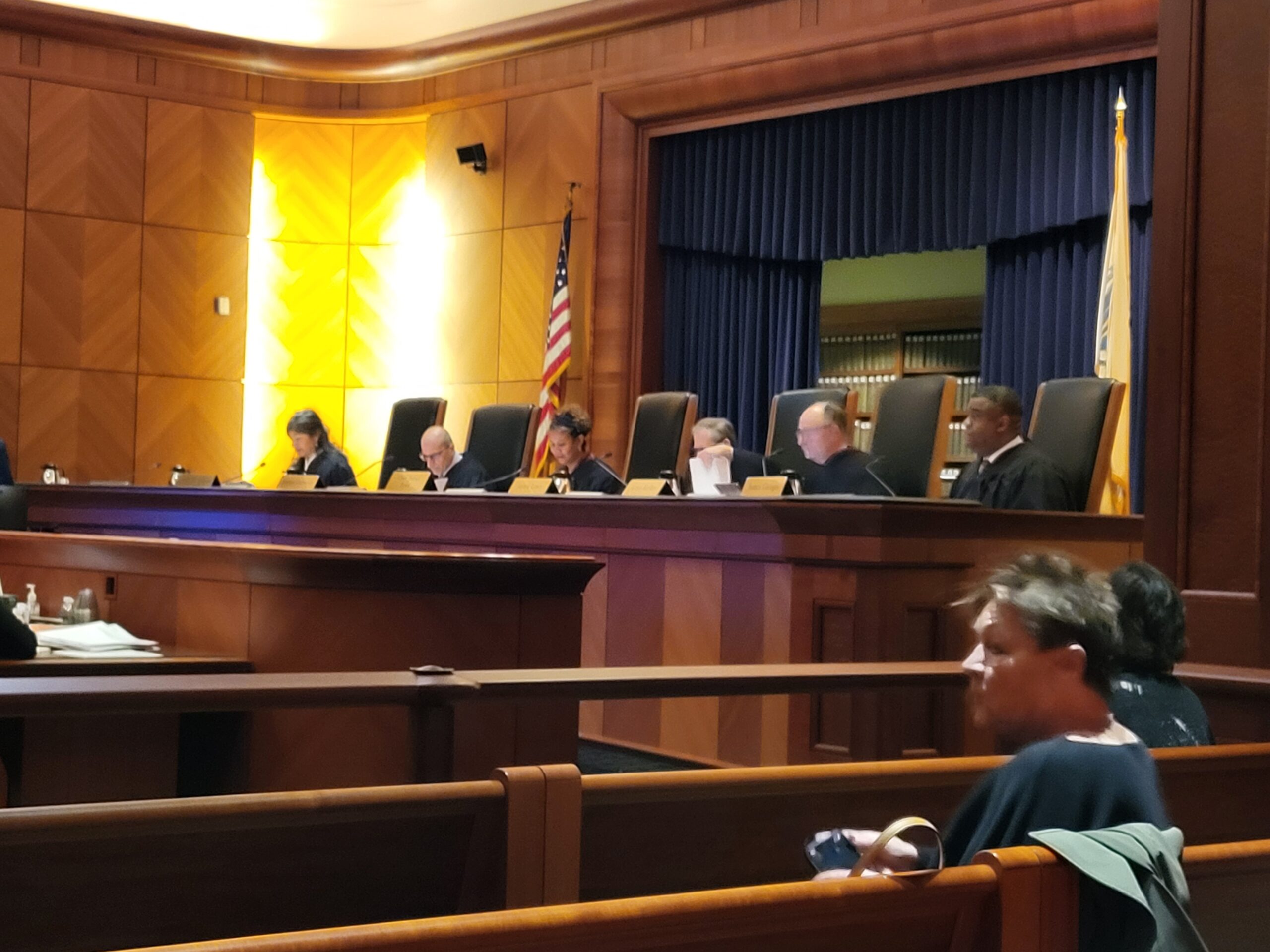 The commonwealth’s highest court considers whether enough evidence exists to prove laws were broken in the Soldiers’ Home outbreak. (WMP&I)

In 2021, a Hampden County Superior Court Judge tossed indictments against both Clinton and Walsh. The court ruled the commonwealth had failed to allege sufficient facts to sustain the indictment. Healey’s office appealed and the Supreme Judicial Court agreed to take the case on direct review. Lawyers for the commonwealth and both defendants participated in oral arguments Wednesday.

The justices did not tip their hand clearly one way or another. Several were mum throughout and the most aggressive questioner, Justice Scott Kafker, queried all three lawyers with equal verve. After the appellate outing, the AG’s office declined to comment except to say the arguments spoke for themselves. Defense counsel also declined to comment.

At the top of the hearing, Justice Elspeth Cypher asked Assistant Attorney General Anna Lumelsky whether several counts were not part of the appeal. She said they were not. A spokesperson for the Attorney General’s office later confirmed that the counts of permitting serious bodily injury had been dropped. Those counts based on permitting abuse stood and were on appeal.

The definition of abuse itself was central in the arguments Wednesday.

Healey unsealed the indictments in September 2020 after her office completed its review of the disaster. A report Baker commissioned faulted the Home for consolidating units, ostensibly due to low staffing, to isolate asymptomatic and/or negative-testing residents. The commonwealth argued this decision amounted to elder abuse under state law. The indictment focused on five veterans placed put into the consolidated unit.

Yet, the indictment was controversial. Many victims’ families, some of whom sat in the gallery of the SJC’s courtroom, backed the prosecution. Others in the 413 questioned the move, 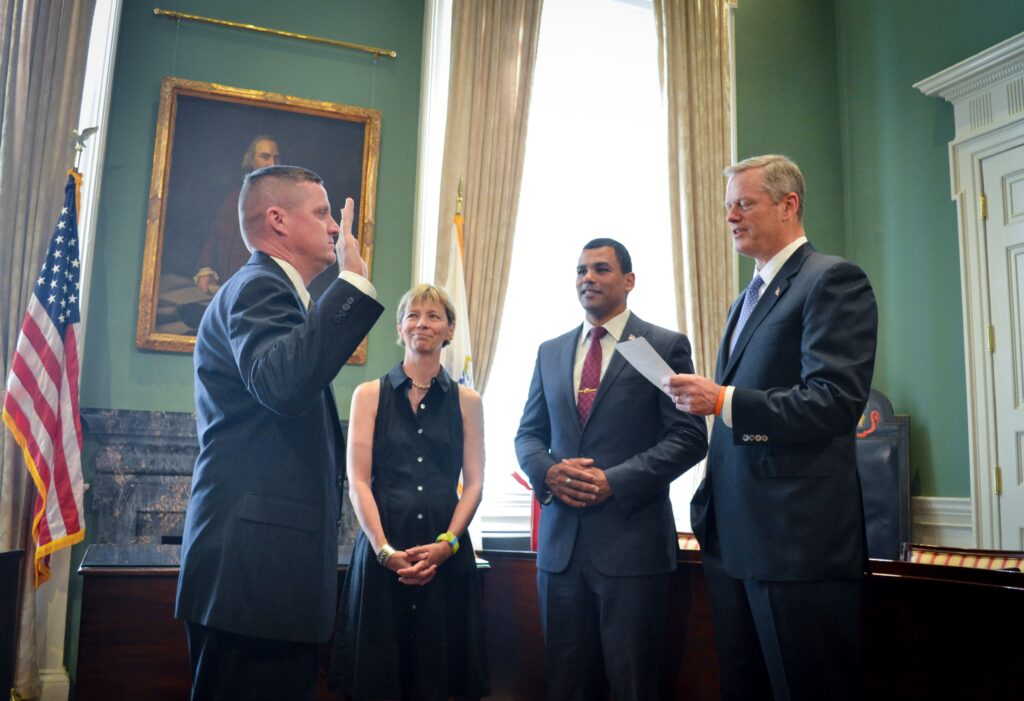 Gov. Baker swearing Walsh in circa 2016 as HHS Secretary Sudders and ex-Vets Secretary Urena look on. (via Twitter/@masshhs)

Many, not to defend either defendant (read: Walsh) felt a much wider system, up to the governor, had failed the Soldiers’ Home, its employees and, most crucially, its charges. Subsequent government and press reports would highlight fault in appointing and supervising Walsh. Among those facing criticism were Health & Human Services Secretary Marylou Sudders.

In his ruling, Hampden Superior Court Judge Edward McDonough, Jr. found that the indictment did not allege enough facts to meet the legal requirements of the statutes under which the commonwealth charged Clinton and Walsh.

The commonwealth disagreed and appealed. The request for direct SJC review asked the court to find enough evidence exists to potentially find the defendants were caretakers and that a substantial likelihood of harm existed from their actions. The exact legal arguments were vague until Wednesday. The court impounded briefs because they cited grand jury testimony which is usually secret.

Skepticism of the commonwealth’s case arrived quickly. Justice David Lowy asked how the commonwealth could meet the reckless or wanton disregard standard of the statute given the context of the broader pandemic.

“Even based on probable cause, at the advent of the panemic how is wanton or reckless?” Lowy asked.

Lumelsky told the justices that for now the commonwealth did not need to distinguish between negligence and reckless or wanton disregard. Rather, that was a matter for trial. In the meantime, she said, there was plenty in the record to show that the consolidation was an egregious error at the time.

She cited experts that testified the higher density of the combined ward increased the risk to the veterans. Other witnesses, a nurse, thought it was bad idea in real time.

“She realized this was a terrible idea and she was concerned about the asymptomatic veterans,” Lumelsky told the court.

As usual, Justice Scott Kafker was one of the more talkative justices in the hearing. (via wikipedia)

Kafker, pushing back on the commonwealth’s premise that the negligence/recklessness line did not matter now, pointed out that aside from an “offer” from the Holyoke Medical Center, the options were few. Can conduct under such circumstances be wanton or reckless, he queried rhetorically.

“If the Holyoke Medical Center is available, this becomes more complicated but without that, it’s hard to say they’re reckless if they don’t have enough people,” Kafker said.

Lumelsky said the staffing issue was the result of the defendants’ failure to take up offers of help from Holyoke Medical Center and Baystate Health. By contrast, Val Liptak, who took over the Soldiers’ Home, consulted with infectious disease experts and sought help from other hospitals.

Lowy was incredulous, noting that a sea change had happened at that point. Higher-ups turne down An earlier request from Walsh for National Guard help.

Clinton attorney Jeffrey Pyle opened his argument restating the defense’s position that defendants did not meet the definition of caretaker. Because the residents were already facing infection in their prior circumstances, an increase in harm from the consolidation is insufficient to trigger the statute.

However, Justice Dalila Argaez Wendlandt suggested the Superior Court jumped the gun by finding a lack of evidence. As for whether the consolidation should be judged in isolation, she again invoked the supposed offer from Holyoke Hospital.

“The decision to merge wasn’t made in isolation,” she said, citing Holyoke Medical Center.

Pyle again emphasized the defendants’ actions could not meet the definition of abuse, namely “creates the substantial likelihood of harm.” The goal of the statute, he argued, was not to encompass any increase in risk. For example, overtired doctors or surgeons with insufficiently clean hands could be an increase, but not a new substantial risk. Rather, it was the creation of a new risk where no substantial one existed previously.

Walsh’s attorney William Bennett—both his uncle and the former Hampden District Attorney—began his argument but undercutting the references to Holyoke Medical Center. 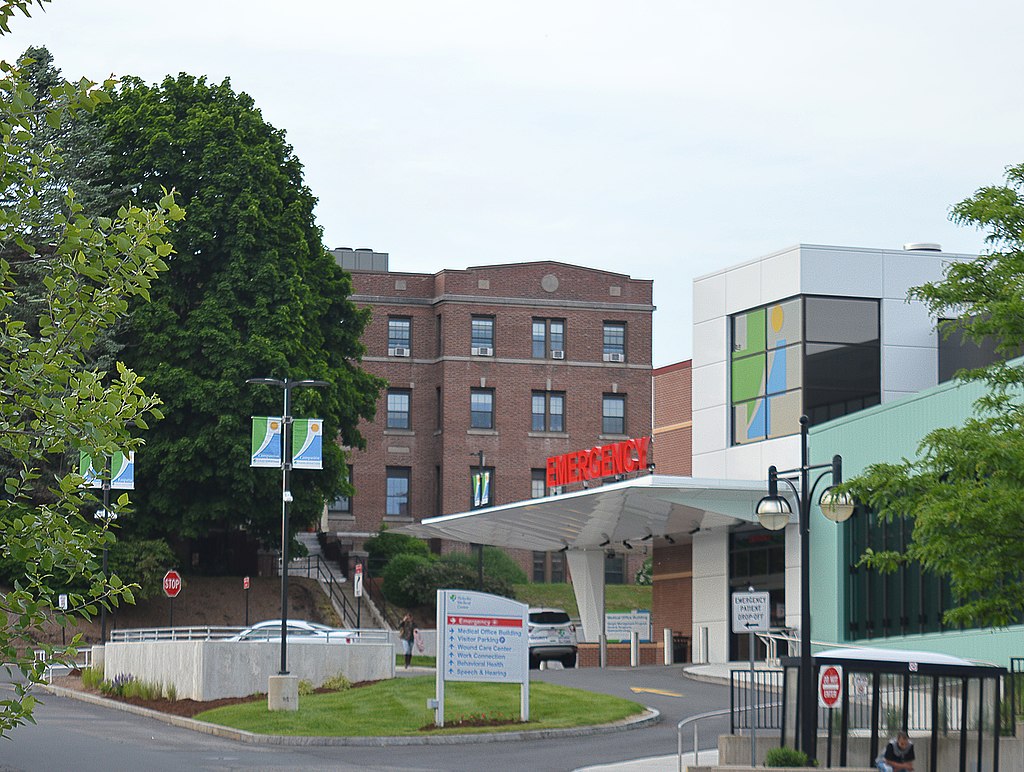 The case may turn on what Holyoke Medical Center did or did not offer, or at least what the record reflects what they offered. (via wikipedia)

Bennett said the conversations defendants had with medical center leadership pertained to residents the Home sent for hospitalization. He also noted the hospital did not admit one patient because he had a do-not-resuscitate order. Many of the residents in the consolidated ward also had DNRs. In other words, the hospital was not offering to take residents to free up space in the Soldiers’ Home. Bennett implied the hospital may turn away even those who might be qualify for hospitalization due to DNRs.

Turning to the statute, Bennett echoed Pyle’s point about the circumstances not meeting the defition.

“The commonwealth must establish probable cause that the preexisting likelihood of harm was not substantial,” he said. “In other words the substantial risk of harm had not already been created.” He went on to note the parade of COVID-positive veterans prior to the consolidation.

Lowy replied that the question reverts to what options were on the table.

Kafker cited Holyoke Medical Center’s executive officer saying if the Home needed “help or wanted to hospitalize veterans” it should reach out. Bennett said that was only about hospitalization not a general offer of assistance. 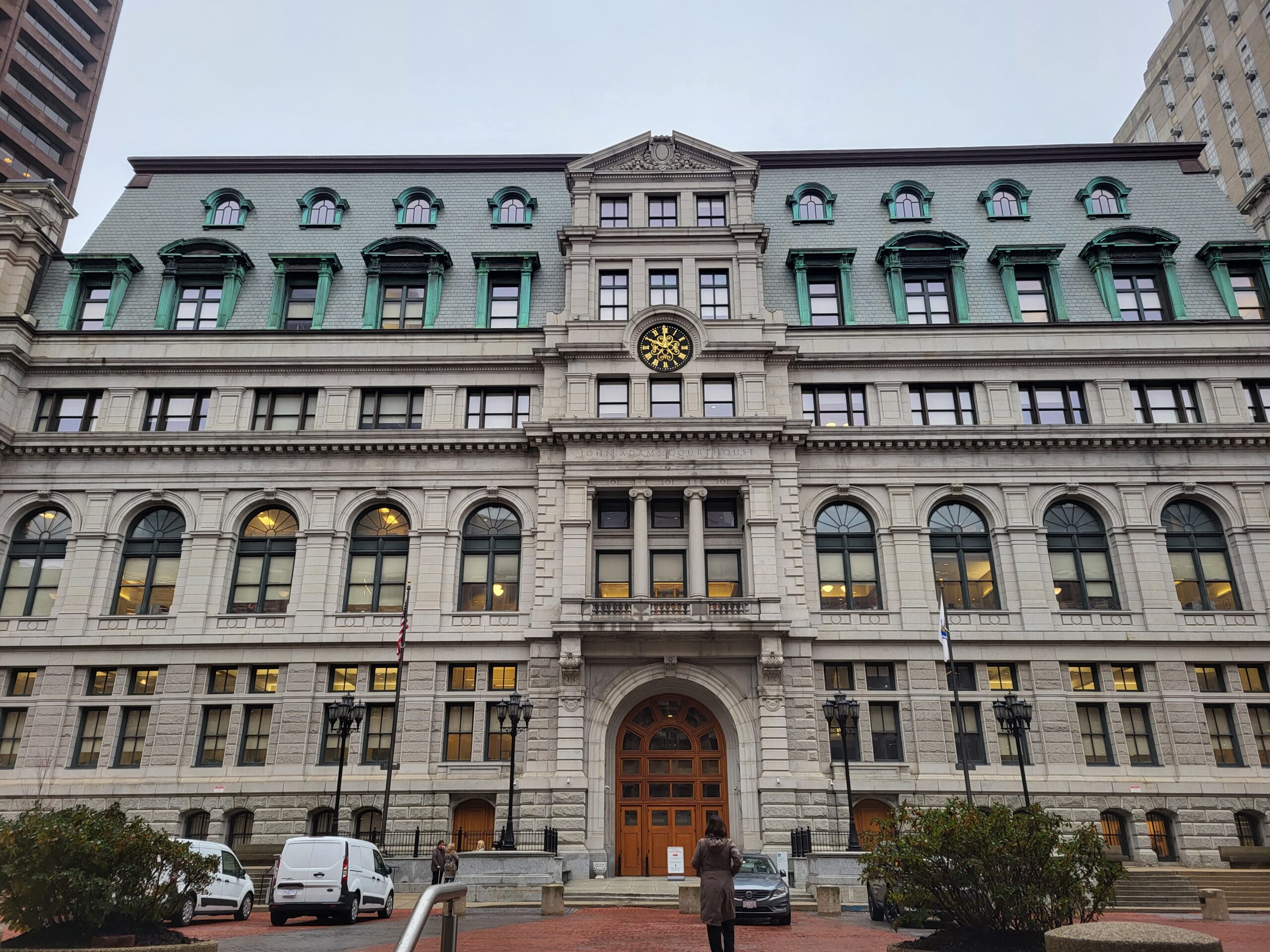 The Adams Courthouse in Boston, seat of the SJC where Walsh & Clinton’s fate could be decided. (WMP&I)

The full record is not available for public review. Therefore, the exact nature of the Holyoke Medical Center’s offer—or a similar, vaguer one from Baystate—is not clear. However, it could be the lynchpin of the justices’ decision. If a majority is generally on the same page as Kafker and Lowy and not Wendlandt, the defendants could win.

Kafker, Lowy and to a lesser extent Justice Frank Graziano telegraphed a willingness to put the tragedy in the context of the broader COVID-19 catastrophe. However, if there were real options Clinton and Walsh did not avail themselves of, they would be more willing to put the issue before a jury.

A decision will not arrive for several months, well after Healey takes office as governor. Her successor, Boston City Councilor Andrea Campbell, would oversee the prosecution if the SJC finds for the commonwealth.

With so much locked up in grand jury proceedings, the full sweep of liability is hard to guard. Were this to face a jury, much more would definitely come out, including how well those above Walsh supervised his superintendency.