With Healey, a Changing of the Guard & a Changeup for the Commonwealth… 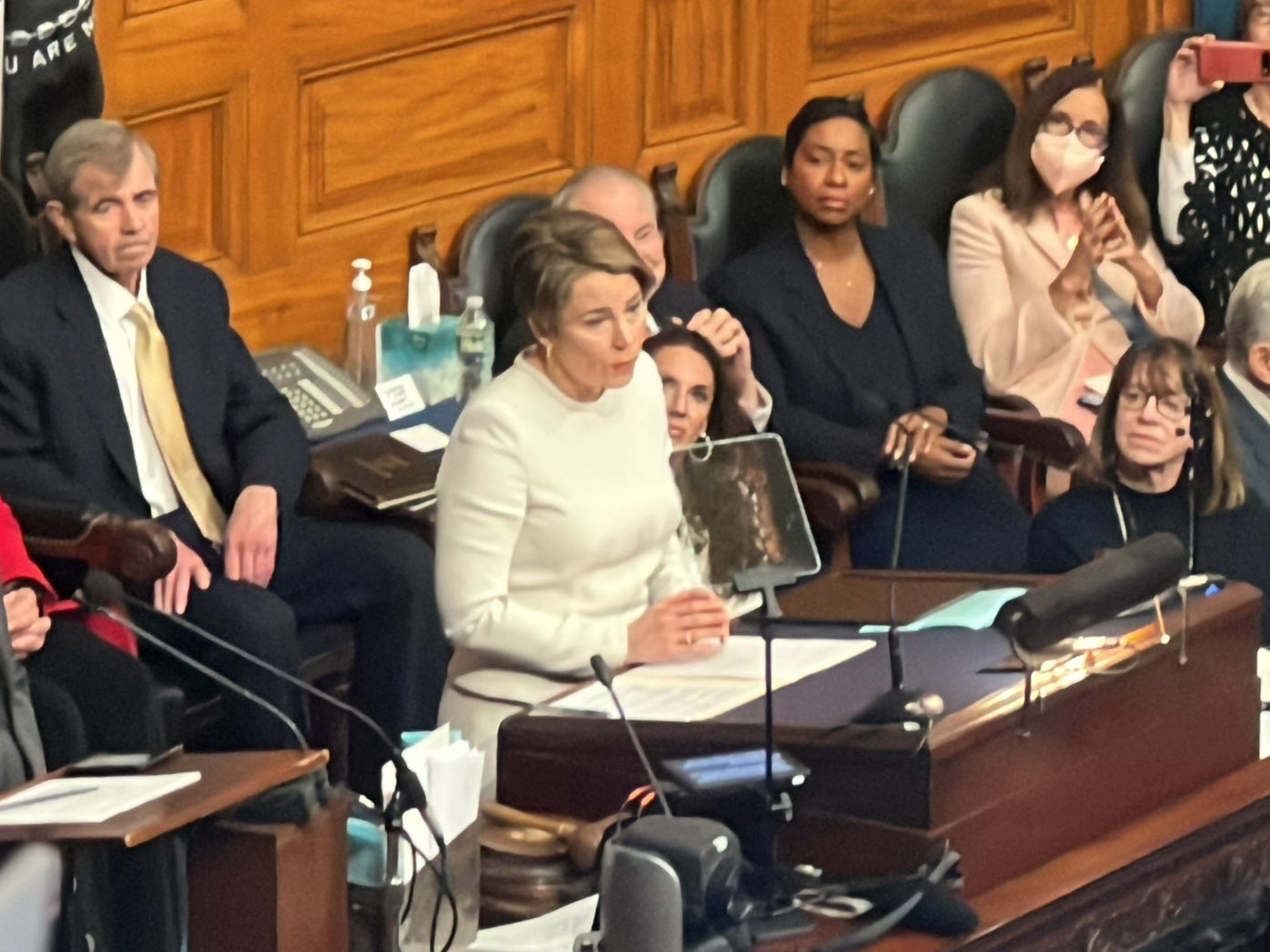 Maura Healey, the former b-baller and civil rights attorney who leapt from obscurity to become the top lawyer in Massachusetts, took office Thursday as the commonwealth’s 73rd governor. She becomes the first woman and the first gay-identifying person to hold the highest office in Massachusetts and one of the most ancient in the United States.

On Wednesday, Charlie Baker, the popular but politically homeless Republican, made the long walk out of the State House. While Healey has attempted to model some of his nonpartisan vibe, she will be taking over a state apparatus suffering from decades of neglect.

“We gather today to transfer the power of government and to renew the miracle of democracy,” Healey said in her inaugural speech. “We gather in the public trust, and commit ourselves once more to the work of the people.”

After beating a far-right opponent in November, Healey’s win and inauguration put state government under full Democratic control after eight years. With that will come a laundry list of progressive hopes, but practical realities, as ever loom.

Healey, 51, took office in the House chamber at the State House, surrounded by the legislature, the judiciary, Governor’s Council, and her gubernatorial predecessors.

She highlighted her family roots in the commonwealth, Newburyport in particular, turning to the draw and opportunities Massachusetts represented. People see beautiful landscapes, education and innovation. But that was not all. 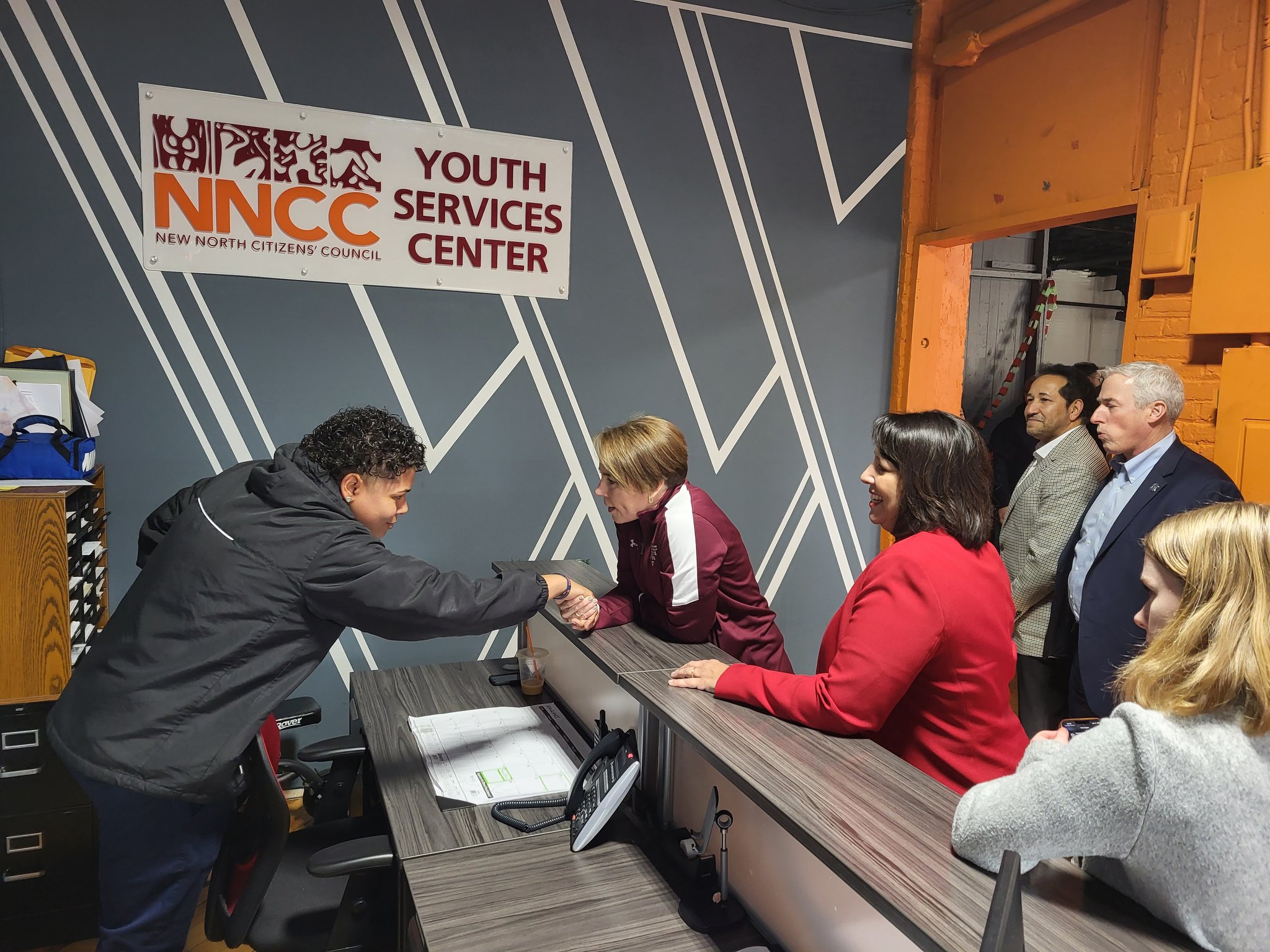 “But they also see barriers that are holding back our people and our state. Keeping just out of reach what might be, what could be,” Healey said. We have untold wealth in Massachusetts. But record public revenue does little good when families can’t pay the rent, or buy a house, or heat their homes, or hire child care.”

The pandemic brought people together, but it also drained them. Still, there are challenges to be met. Healey focused on three in her speech.

Echoing earlier promises, she said she would file legislation to establish an office of housing to meet housing goals. Surplus state land would be eyed for housing within a year. With housing one of the biggest expenses in Massachusetts, it would help address the cost of living.

“We have to make Massachusetts a place that people can afford to call home. Our people can’t realize their dreams until we end the nightmare of high costs,” she said.

On competitiveness, Healey said her administration would work to fully fund the Student Opportunity Act and employee public and community colleges to train the workers employers need. However, she also said transportation was a part of keeping the commonwealth competitive. The ever-imploding Massachusetts Bay Transportation Authority will receive a new safety officer and 1000 new employees in her budget.

Rejecting growing despair about addressing the climate crisis, she pledged to establish a cabinet-level climate chief who would work across all agencies. Healey promised to deploy state dollars to renewable energy and electrifying vehicles.

“Let me be clear about this. Where others may see hopelessness and resignation, I see unparalleled opportunity,” she said.

Joining her atop state government is Kim Driscoll, the now-former Mayor of Salem, who won a primary that was more competitive than Healey’s. While the state constitution grants the LG a dearth of power, the position has become important as an emissary of the governor. 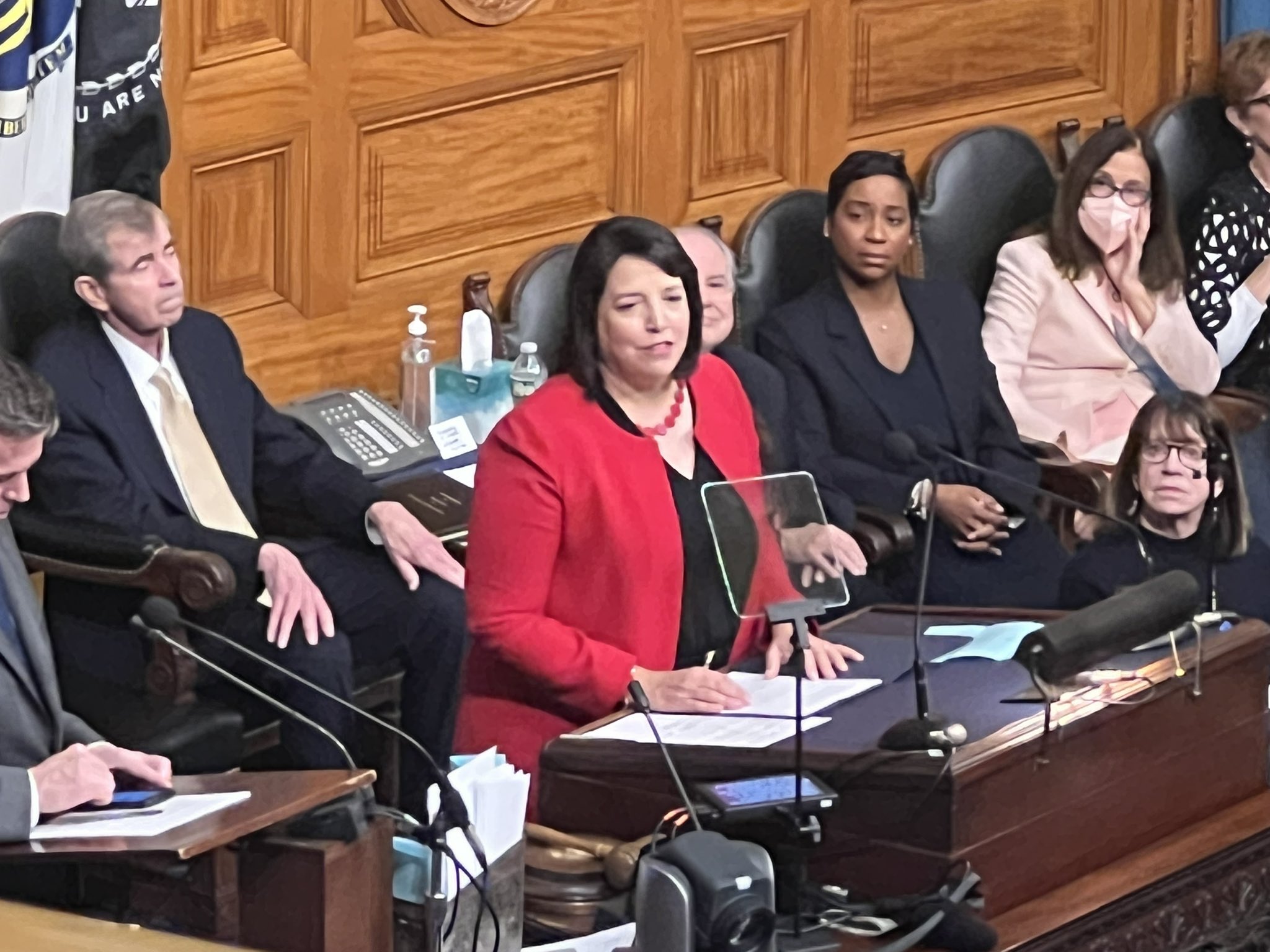 Lt. Gov. Driscoll giving her remarks after taking the oath. (via Adam Bass)

Driscoll emphasized the national history of a two-woman ticket serving Massachusetts and referenced her roots in Salem, one of the state’s oldest cities. She took the oath on a bible from the House of Seven Gables, a historic landmark that inspired Nathaniel Hawthorne.

“Those of us in this room elected to represent people throughout Massachusetts know that it’s possible to meet our collective needs in housing, in education, in transportation and climate. After all, we’re a state with a rich history of firsts – from sparking a revolution at home to sharing life-saving vaccines around the world,” Driscoll said in her speech.

“Now, more than ever in our state’s history, we must lean into our roots and embrace the opportunities to grow, change, innovate – to bring people together in advancement of our shared vision,” she continued.

Healey is still in the process of filling out her administration. Better than expected results for Democrats nationwide may have slurped talent that expected to face unemployment after a GOP wave. While the state’s civil service needs replenishment and revival, the biggest foe Healey will confront is politics itself.

Baker may point to some bipartisan successes. But he ingratiated himself with many Democrats by appealing to their and the state’s worst instincts. Republican governors have been popular in Massachusetts before, but usually such adulation arose from jousting with the arch-Democratic legislature, not placating it.

By contrast, the last Democratic governor, Deval Patrick, sometimes struggled to get parts of his agenda through Beacon Hill.

Healey could face similar headwinds. An understated factor in Patrick’s travails was the growth of the Democratic caucus. After the Bush era and the Obama wave, the caucus included many ideologically conservative or red-district Democrats. The Trump years ushered in a new such wave. If trends nationally are any indication, some leftward drift could be more durable this time.

Healey was a solid outsider when she defeated Warren Tolman in the 2014 Democratic primary for attorney. This time, she was a favorite of the establishment and many reformers alike. But how reliable are pols of varying quality who race to yuck it up using basketball references? For every true Healey believer, two or more mercurial fair-weather electeds may one day stymie her.

Although she has generally positioned herself as leftier than not, it would be a bit precious to call Healey an executive version of the Squad. The priorities Healey has laid out, while critical, are not a raging river of progressive dreams. This is not unusual for New England states awash in Democrats, however.

Closing, Healey closed by condemning the political chicanery of other states as antithetical to the values of the commonwealth.

“Let the word go out to people and businesses here and in every part of this country. In Massachusetts, you are welcomed. You are included. You are protected,” she said.

That, however, and much more of the agenda is not automatic however. It will take work, she indicated, which will come after the pomp and circumstance pass.

“We get to work in the greatest state, for the greatest people, at a moment when we can make the greatest difference — now and for a generation to come,” the governor said. 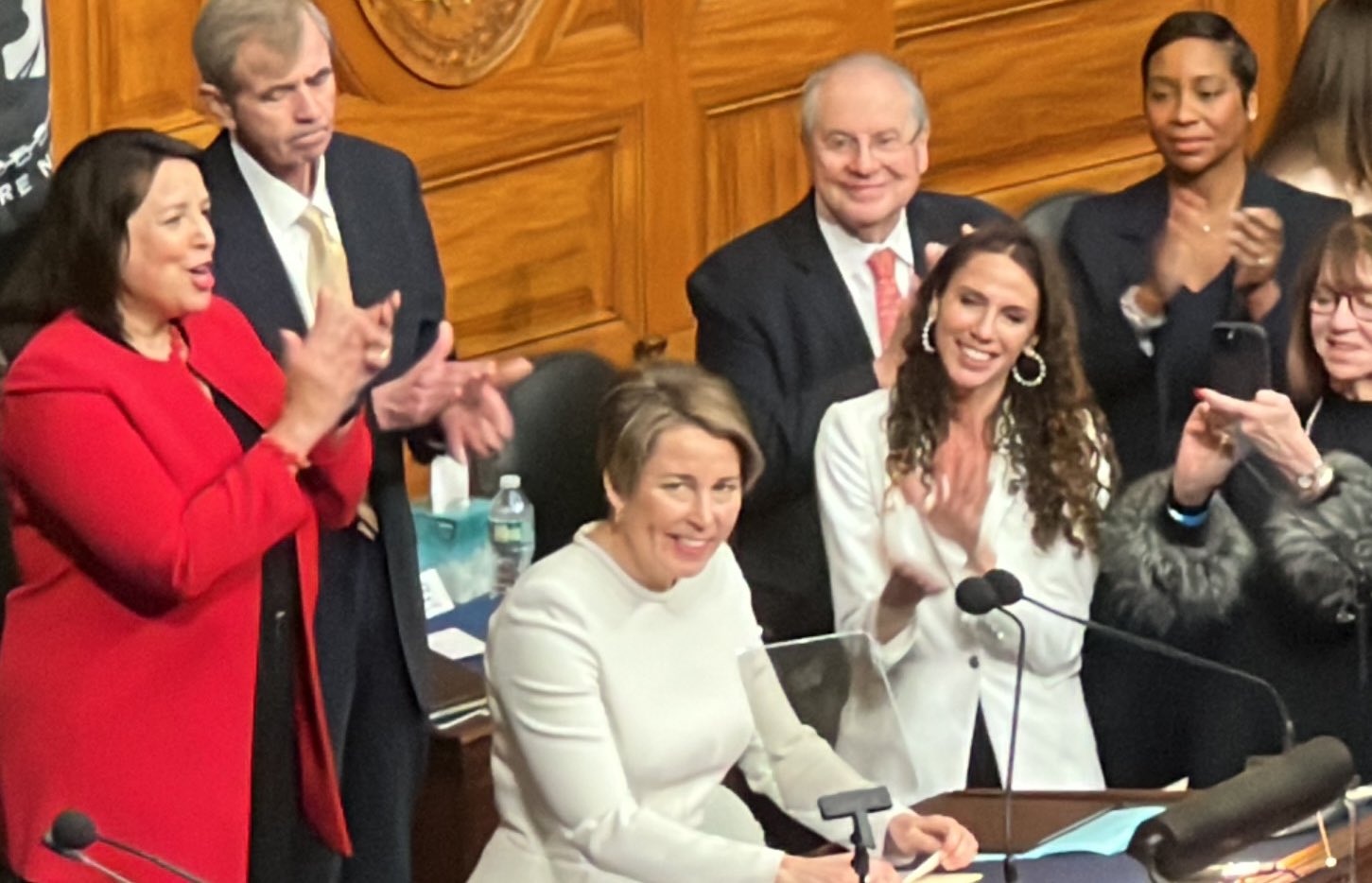